British prime minister-in-waiting Liz Truss is said to want to appear in the fashion glossy, but she should be careful what she wishes for

Liz Truss, heavily tipped to be the next leader of the Conservative party, would like to get into Vogue. We know this because she asked the Scottish first minister, Nicola Sturgeon, how to go about it at the Cop26 climate conference last November. Sturgeon said Truss “looked a little bit as if she’d swallowed a wasp” when she told her she had made its pages twice.

“This is going to sound really up myself but I don’t mean to … I’d just been interviewed by Vogue, as you do … that was the main thing she wanted to talk to me about – she wanted to know how she could get into Vogue”, Sturgeon told an Edinburgh fringe event last week.

The discussion may have been relatively neutral at the time, but its public airing confirmed the tense relationship between the two – one already politically powerful and the other on the verge of becoming so. Earlier in the week, Truss had labelled the Scottish National party leader an “attention seeker” and told a hustings in Exeter that “the best thing to do with Nicola Sturgeon is to ignore her”.

But it poses the question: why is acceptance or non-acceptance by a 130-year-old magazine important to politicians? And what is it about Vogue’s image enhancement that sets political figures off on both sides of the Atlantic?

In purely political terms, says James Schneider, former communications director for Jeremy Corbyn (who graced the pages of GQ), a magazine story and its cover may reach people outside the realm of typical messaging. It stays in circulation for a month and lies around for longer.

“That’s the upside,” he says. “The downside risk is looking stupid, crass, out of touch or it being off-key in some particular way.” When Corbyn appeared in GQ, his team insisted on high street clothing, according to Schneider. “Normally, the magazine would try to make people seem cool in a conventional way and aspirational in a consumer way. That’s not Jeremy’s vibe and we didn’t want it to look like his day out in 900-quid Gucci shoes.”

But, he says, it’s not surprising that Truss might want a show on Vogue’s pages. “Liz Truss is very Instagram so I’m sure she’d love it. And I’m sure if she wants to be in Vogue after September she will be. She’ll be trying to recreate Mrs Thatcher’s greatest outfits in any magazine she likes.”

A Vogue spread can be contentious. Liz Tilberis, who ran both UK Vogue and US Harper’s Bazaar, used to coax celebrity subjects by pointing out that the lovely picture could sit on their piano.

Theresa May sat for American, not British, Vogue and toned down the fashion after being previously criticised for wearing £1,000 brown leather trousers.

In the US, vice-president Kamala Harris posed for a shoot while campaigning in 2020. Pictured in a black blazer and Capri pants with Converse sneakers, she was reportedly not happy with the cover picture and asked aides: “Would Vogue depict another world leader this way?” A US Vogue spokesperson said the editors had felt the image captured Harris’s “authentic, approachable nature”.

Some refuse – including Tony and Cherie Blair, and David and Samantha Cameron – expressing concerns that the upmarket readership is not in keeping with the message they wish to send. Some, like Hillary Clinton, initially accepted (when she was depicted as the resolute first lady after the Lewinsky affair) and later turned the magazine down when running for office.

Michelle Obama accepted in 2009, 2013 and 2016. Laura Bush, Barbara Bush, Nancy Reagan and Melania Trump never made the cover as first ladies. Trump is said to have found that difficult to swallow. She had made it in 2005, but not after her husband was elected.

After her successor, Jill Biden, was on the cover earlier this year, Melania claimed Vogue was “biased”. “They have likes and dislikes, and it’s so obvious,” she sniped.

But the calculations, on both sides of the deal, are complex. Stephanie Winston Wolcoff, a former US Vogue staffer put in charge of seating editor Anna Wintour’s glamorous Met Ball, later became a White House adviser to Trump before offering an extensive recantation of the latter role in a book, Melania and Me. She said the magazine was no longer just after movie stars and first ladies: it wanted global leaders.

“Just like the Met Ball, the invitation usually comes from the magazine, not the other way around,” she says. But, Winston Wolcoff cautions, “the magazine knows who it wants to interview and why”.

Amy Odell, author of a recent biography of Wintour, points to the recent cover featuring Ukraine’s first lady, Olena Zelenska, which stirred up criticism from conservative commentators. She says the reaction “speaks to the power of the brand”.

“Vogue still has a lot of cultural relevance and they’re still investing enough to produce quality images,” she says. “Their access is so good because they write positive pieces, take gorgeous photos and give them space so people want Anna and, increasingly, [British editor] Edward Enninful’s stamp of approval.”

And that turns out to be a two-way street. After rumours surfaced that Wintour was in the running to be the US ambassador to Britain in 2013 – a posting that did not materialise – Michelle Obama opened Wintour’s Costume Institute at the Metropolitan Museum of Art in New York. “They [the Obamas] felt the story about her ambassadorship had got spun and they wanted to support her,” Odell says.

But there are also nuances to the exchange. Political features in the magazine no longer give fashion credits to every look and the profile of Zelenska barely mentioned her clothes, which would have seemed gauche in the circumstances. “They’ve evolved their approach, and politicians are re-evaluating the optics of being in a fashion magazine,” Odell says. 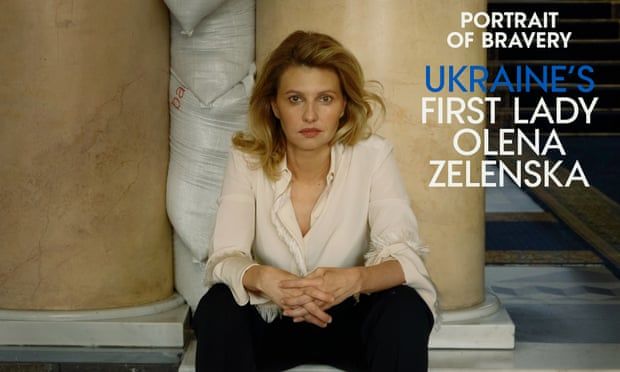 Ukraine’s first lady, Olena Zelenska, as she appeared on the cover of Vogue.

Eve MacSweeney, who was features editor at British Vogue and features director at the US edition, says: “Nicola Sturgeon had it right when she said she got into Vogue by being asked – you wouldn’t normally lobby your way on to its pages.”

Horse-trading and consultations only go so far, it seems. Occasionally choices are made to memorialise in the public record some event – a new administration, a royal birth, or the retirement of a tennis star (Serena Williams broke the news of her retirement to Vogue).

Within those exchanges is some sense that the fashion magazine offers an aspect of continuity the political sphere alone cannot muster. “What’s interesting is the increased desire to be featured,” says MacSweeney, who worked on getting members of Blair, Cameron and May administrations into Vogue.

“I found that the Brits were often very cagey and concerned that being seen in this kind of elitist context might hurt them. I say, go for it! If they are interesting and influential, we want to read about them in Vogue, and why not have a great portrait taken that will pop up for eternity in every Google search?”

But, she adds: “As for seeing Liz Truss in the magazine’s pages, it’s not a PR tool for her. She needs to wait and see if she ticks the right boxes for the editors, which may never happen.”