Exclusive: UN agency must respond to the ‘real needs’ of the women and girls, says Julienne Lusenge, co-chair of the independent inquiry into the scandal

Survivors of sexual abuse by World Health Organization aid workers during the Democratic Republic of the Congo’s Ebola outbreak in 2018 should receive “substantive” reparations, the co-chair of an independent inquiry into the scandal has said.

Julienne Lusenge, a prominent Congolese human rights activist, said it was “essential” that the UN’s global health body drew up a workable plan for reparations to respond to the “real needs” of women and girls who became victims of abuse.

“The issue of reparations is very, very important,” said Lusenge, executive director of the Fund for Congolese Women. “Babies were born; women were left unwell. So we think it’s important to have a holistic programme in which the alleged victims themselves will be the stakeholders.”

In a damning report published this week, the independent commission found 21 of the alleged perpetrators of serious abuses, including a number of rape allegations, were employed by the WHO. The scandal led to 29 pregnancies, with some women later being forced to have abortions by their abusers, the inquiry found. 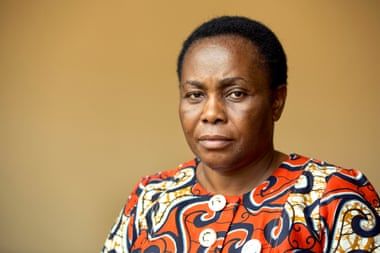 Julienne Lusenge, the Congolese activist who co-chaired the inquiry, said a ‘strong message’ had to be sent to those who would abuse women and girls.

In total, the commission interviewed 75 alleged victims aged 13 to 43. The youngest survivor recalled being offered a lift home by a WHO driver in the small town of Mangina in North Kivu. She said that instead of taking her home, the man raped her. She became pregnant and had a child, the report noted.

Lusenge and her fellow commission members called on the WHO to draw up a plan for making reparations to the survivors once the investigation had been completed. Many victims, they noted, had complained of receiving no help and being “left to deal with the physical and moral consequences” of the abuse on their own.

“So we are now waiting for the WHO to … provide substantive reparations,” Lusenge told the Guardian on Thursday.

“We think it’s important that a strong message be sent to all those who might one day embark on humanitarian programmes and abuse and exploit girls and women. For us, this is essential. We must make sure this reparations programme is properly drawn up and responds to the real needs of the victims.”

The report said some of the victims had suffered trauma as a result of the abuse, with some of the men administering abortion pills or injections to girls and women they had impregnated. Other victims had seen their financial insecurity worsen as a result of the abuse and exploitation. Two said that, after their pregnancies became public, they had been forced to stop their studies.

On Tuesday, as the report was released, the WHO’s director general, Dr Tedros Adhanom Ghebreyesus, vowed that there would be “zero tolerance for sexual exploitation and abuse, and zero tolerance for inaction against it”.

He said four people who were still employed by the WHO when it was made aware of the allegations had had their contracts terminated. Two other employees have been placed on administrative leave pending an investigation into their handling of complaints. Apologising to the victims and survivors, Tedros said the WHO’s “central concern” now was providing them with “services and support”.

However, Dr Gaya Gamhewage, the WHO’s director of prevention and response to sexual exploitation, abuse and harassment, appeared to rule out formal reparations.

“We acknowledge that we need funds easily available on the ground for victim and survivor support. That’s very clear,” she said. “However, there is no provision in the UN system for financial reparations to the victims.”

Marcia Poole, a WHO spokesperson, said the body was working with UN partners to ensure that “all victims and survivors” were provided with support in accordance with the UN protocol on assisting victims of sexual exploitation and abuse, including medical and psychological support.

She said: “Some are receiving support through the UN system for the education of children born out of [sexual exploitation and abuse] as well as livelihood support, such as dressmaking, livestock farming and basket-making, so that they can sustain their families.

“We need to work with others to make sure such support is predictable, effective and provided at scale, as needed.”