In the grip of lockdown, Jools Sampson offered free retreats to NHS staff. Now it’s her turn to be pampered

When the pandemic hit, Jools Sampson’s work dried up. Sampson, who is 53 and lives in north London, runs a business offering yoga and wellness retreats across the UK and overseas. One of her regular clients worked in an NHS intensive care department, so Sampson checked in with her to see how she was doing. It was April 2020. The woman said she was struggling. It got Sampson thinking.

“I contacted all my team,” she recalls, “which is 12 people, and said, ‘I’m thinking about offering free retreats to NHS staff. Would you like to be involved?’ All of them said yes, straight away.” Sampson contacted her favourite venue, Tofte Manor in Bedfordshire, and its owner waived the hire fee. But Sampson still needed money to pay her staff’s expenses. She posted a fundraiser online and the donations began rolling in immediately.

Next, to invite NHS staff. Sampson put out a call on social media and asked people to nominate friends and loved ones. Within days she had 400 nominations – for just 16 places.

“Oh my God,” she says. “It was heartbreaking, reading through those stories.” In September 2020, the first cohort of NHS staff arrived at Tofte Manor. They were doctors and nurses who had worked predominantly in ICU or Covid wards. They were exhausted, traumatised and strung-out.

“Many of them had gotten Covid,” Sampson says. “Some of them had long Covid. Others had lost colleagues. They’d been working without PPE, sleeping away from their families in caravans for six weeks, so as not to bring the virus home.”

Sampson and her colleagues offered three home-cooked meals a day, with wine in the evenings. “This wasn’t a detox retreat,” Sampson jokes. They gave massages and facials and ran yoga and breathwork sessions. In the evenings, the team would host deep relaxation workshops, to help the staff sleep: many had developed insomnia.

On the first day, the doctors and nurses spoke about practical stuff, medical treatments. By day two, they were speaking about their emotions. “They were able to reflect and support each other,” Sampson says. “All of them were either in deep shock, had PTSD or were completely burnt out.” Newly qualified nurses spoke about the horror of having to console struggling patients while their families watched via a video call.

“Every single person on that retreat cried,” says Sampson, “it was so emotional.

All we wanted was for the NHS staff to feel appreciated. We wanted to shower them with love.”

“Jools has been like an angel, coming into stressed and distressed people’s lives, and giving them a chance to be thanked, supported, and cared for,” says massage therapist Lucie Ormerod, who volunteered her time on the retreat. 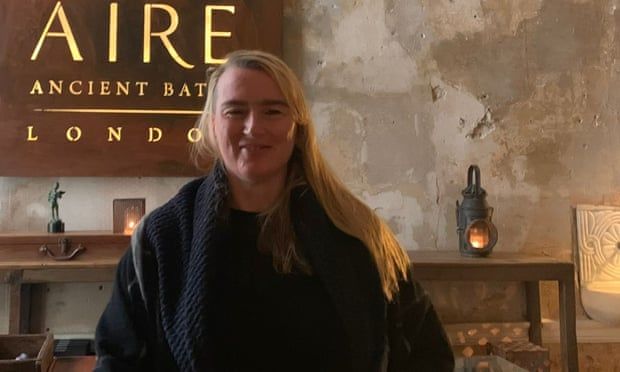 Jools Sampson on her spa day out.

Sampson organised two further retreats, in May and June last year. “People had been through so much. In the first wave of the pandemic they’d been heroes. A year on they were asking themselves, ‘Is there something else I can do with my life?’ Their mental health was really deteriorating.”

She still has money left over from her fundraising efforts, and plans to run two more retreats later this year. It’s difficult to find a venue she can afford to hire, now that wedding bookings are resuming – plus she’s back to her pre-pandemic workload, so time is limited. Meanwhile, more nominations arrive in her inbox every day. “NHS staff are still utterly exhausted,” Sampson says.

Even though it takes Sampson hundreds of hours to deliver the retreats, it doesn’t feel like work. “It’s given me faith that there are many good people in the world,” she says. “The last year and a half has been a really dark time for me personally and professionally, and to be around such special humans has given me a lot of faith. It’s a real honour to care for them.”

At Sampson’s request, Aire Ancient Baths spa in London gifts her with a day of spa access and a sandalwood oil massage. She heads down on a Friday afternoon after a particularly busy month planning her new NHS retreats for later in the year. “I pottered about the hot pools and steam baths for ages,” she says of her spa day, “just thinking about my life over the last two years. Because I’ve spent time running these retreats for people who’ve been through hell and back, but in that time, I’ve not really given anything to myself.”

She says it was an emotional experience. “I sat in those baths, and was so grateful. I thought, ‘Jools, you’ve worked hard for the last two years, and it’s been tough.’ It was a powerful moment of reflection, and giving myself a little pat on the back.”