The final vote on controversial proposals to make it easier for people in Scotland to change their legally recognised gender will now not be held until Thursday.

The Scottish Parliament had been due to vote on the legislation on Wednesday.

But with MSPs still debating proposed changes to the bill, a decision was taken to delay the vote by a day.

The reforms are still expected to be backed by a majority of MSPs when the vote does happen.

A marathon debate on more than 150 proposed amendments to the legislation ran until midnight on Tuesday and only ended after the lights in the Holyrood chamber - which are on a timer - went out.

It resumed on Wednesday afternoon, with MSPs still debating and voting on the amendments at midnight.

A decision was then taken by parliamentary authorities to schedule the final vote for later on Thursday rather than risk having Wednesday's session continuing the early hours of the morning.

The debate was further delayed later on Wednesday when an SNP MSP became unwell in the chamber.

It resumed again after assurances were given that she was feeling better and would continue to take part in votes remotely.

There has been anger from some MSPs over attempts by the Scottish Conservatives to delay the process in the chamber by raising repeated points of order and pushing every amendment to a vote.

Deputy presiding officer Liam McArthur told Conservative leader Douglas Ross that he was "skirting close to being in contempt of parliament".

The Tories have accused the Scottish government of attempting to avoid proper scrutiny of the legislation by rushing it through before Christmas.

What are the proposals?

People in Scotland have already been able to change their legal gender from male to female or female to male since 2005.

But the new rules will lower the minimum age they can do so from 18 to 16.

They will also remove the requirement for a medical diagnosis of gender dysphoria.

An applicant for a Gender Recognition Certificate (GRC) will now need to have lived in their acquired gender for just three months - or six months if they are aged 16 or 17 - rather than two years.

There will be also be a three-month "reflection period" during which they can change their minds.

It will be a criminal offence to make a false declaration or false application for a GRC, with anyone who does so potentially facing up to two years in prison.

But it will be possible to de-transition by going through the process again.

About 30 gender recognition certificates are currently granted to people in Scotland each year, although the government believes that number could increase to between 250 and 300 once the new legislation becomes law.

The reforms to the Gender Recognition Act have been one of the most controversial pieces of legislation to have gone before the Scottish Parliament, and had previously been shelved by the government.

The parliament was suspended for about half an hour on Tuesday after campaigners shouted "shame on all of you" from the public galleries.

Author JK Rowling has been an outspoken critic of the proposals, which also saw an unprecedented revolt from SNP backbenchers concerned about the potential impact on the rights of women and girls.

The rebels included Ash Regan, who resigned as the government's community safety minister in October because she could not support the changes.

Speaking ahead of the final vote, Ms Regan argued that "the message that's being sent out to women and girls is that you don't matter".

The UK government has not ruled out mounting a legal challenge to the new Scottish system, with the prime minister's official spokesman recently saying there were "clear concerns".

These concerns are understood to centre on the potential impact of people with gender recognition certificates moving from Scotland to other parts of the UK, where a different system will still be in place.

But the legislation is expected to be backed by the vast majority of SNP MSPs as well as by Labour, the Liberal Democrats and Greens - with most Conservatives opposed. 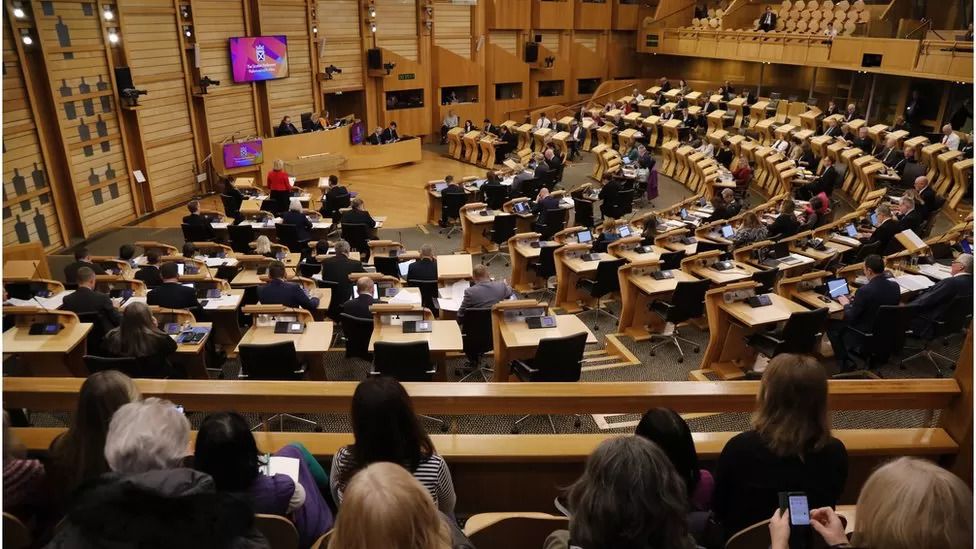 The Scottish government has insisted that "trans rights are not in competition with women's rights", and that the proposals will be a "significant step forward in creating a more equal Scotland, where trans people feel valued, included and empowered."

It also says the new process will be less intrusive and distressing for people who wish to change gender.

Opponents have raised concerns about the potential impact on women-only services, spaces and legal protections.

Efforts by some MSPs to keep the minimum age at 18 have already been voted down, with Social Justice Secretary Shona Robison saying that lowering it to 16 would bring the system into line with other rights given to people at that age, such as being able to leave home, marry and vote in Scottish Parliament elections.

Conservative MSP Russell Findlay also saw his amendment that sought to prevent convicted sex offenders being allowed to change their gender voted down.

The government instead backed another amendment by SNP MSP Gillian Martin that would mean anyone convicted of a sexual offence who wants to apply for a GRC will need to be fully risk assessed.

It follows concerns that predatory men could attempt to change their gender to gain access to female prisons.

If the risk is thought to be too high, their application could be refused.