Daniels joined in 2018 with fraud offender and former lawyer Michael Avenatti, during which the two claimed that President Trump had sex with her about a decade ago, and years later sent thugs to threaten her with a demand that she remain silent.

Among other things, Daniels claimed that a stranger approached her while she was with her baby daughter in Los Angeles and told her "Leave Trump alone", not before looking at her baby daughter and threatening her: "That's a beautiful little girl. It ' d be a shame if something happened to her mom).

President Trump, however, has vehemently denied the allegations of the Daniels and Abanati duo, emphasizing that he has never had an affair, let alone sex, with Stormy Daniels, and certainly has not sent bullies to threaten her.

Despite President Trump's denials, the duo of Daniels and Avenatti received widespread and sympathetic publicity in the US media. For the publication of an autobiographical book by Peri Atta in exchange for an advance of $ 800,000, Avenatti was recruited as a guest commentator on CNN and in addition previously announced by the station as… a possible candidate for the presidency of the United States.

The story of the two began to crack when a federal court dismissed Stormy Daniels' defamation lawsuit in December 2018, ruling against her legal expenses and punitive damages in favor of President Trump in the amount of about $ 300,000.

At the same time, details began to emerge about the exploits of Michael Avenatti, from which it was revealed that Avenatti is a fraudster who stole money from his clients and even worked to extort various businesses across the United States, including the giant Nike company, through threats to fabricate various charges against them, if they will refuse to pay him hundreds of thousands of dollars. And in the case of Nike in the amount of about $ 25 million. He also demanded that they appoint him as a salaried legal adviser in the companies he blackmailed.

Daniels was later shocked to discover that the duo's partner, Avenatti, not only cheated and extorted huge companies, but also stole a significant portion of the money she received as a down payment under the exclusivity agreement for publishing an autobiographical book.

This week, another blow fell on Daniels' head, after the Court of Appeals dismissed her appeal for dismissal of her defamation lawsuit and for her to pay court costs and punitive damages to President Trump - in the amount of about $ 300,000.

In response to the court's decision, Daniels stated that she was "beeping at the verdict" and even posted a message on Twitter stating that she would rather go to jail before paying one penny.

At the same time, President Trump issued a press release in which he mentioned that over the years since, he has repeatedly emphasized that the claims of the Daniels and Avenatti duo were false and intended for fraudulent purposes: "As I have stated many times over the years, I have never had an affair with Stormy Daniels. "I ever wanted that. The ruling was a complete acquittal and victory for me and for me." “The lawsuit was a purely political stunt that never should have been started, or allowed to happen, and I am pleased that my lawyers were able to bring it to a successful conclusion after the court fully rejected her appeal. Now all I have to do is wait for all of the money she owes me. 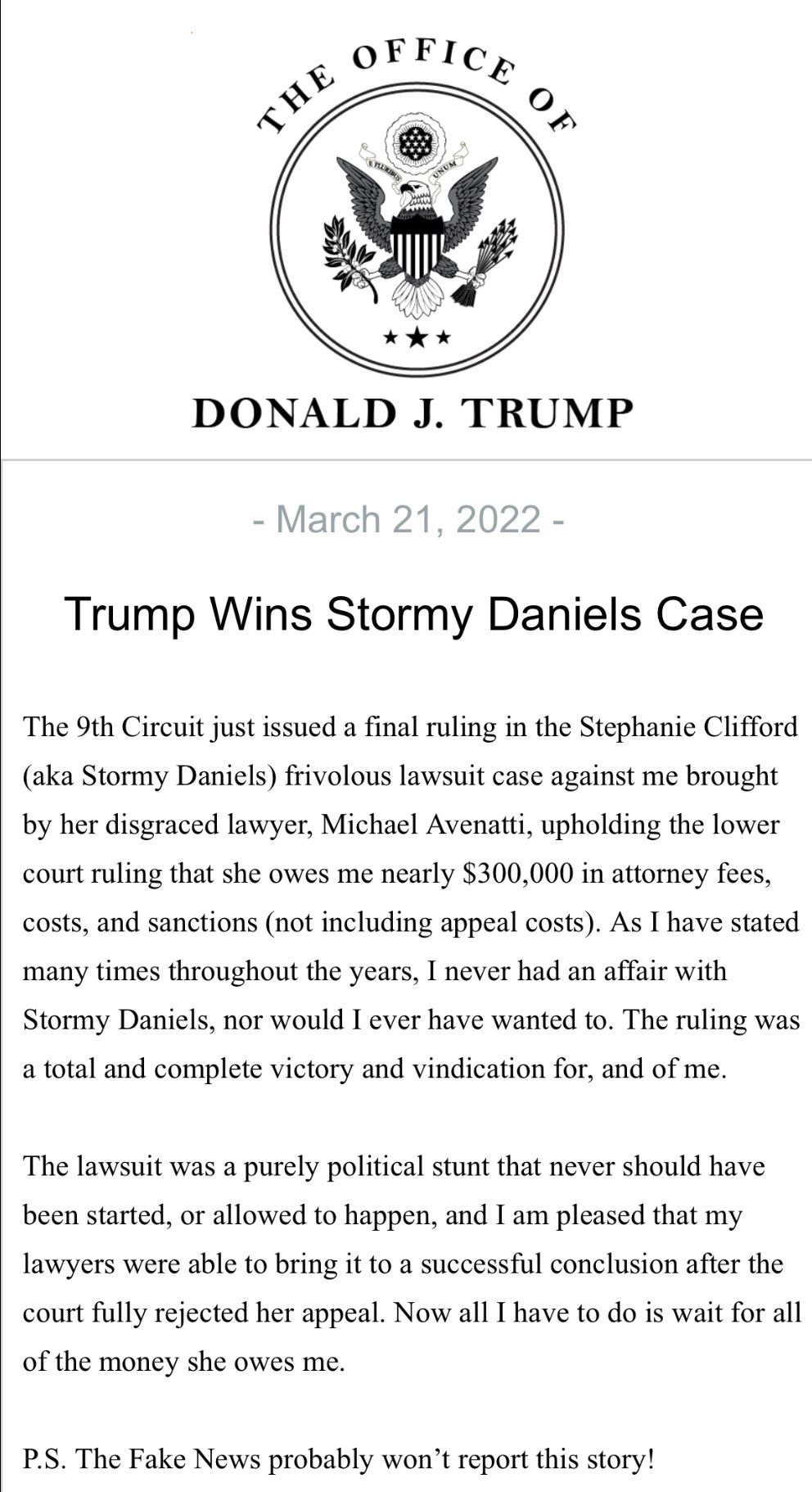