The United States Supreme Court is taking up a case that could reverse decades of access to abortion in the US, in what women’s rights advocates are calling a potential turning point in the country’s history.

The nation’s top court began hearing oral arguments on Wednesday on whether a Mississippi state law enacted in 2018 that bans most abortions after 15 weeks of pregnancy is unconstitutional.

The hearing sets up a decision by the Supreme Court next year that could overturn nearly 50 years of federally protected abortion rights, which were granted in a landmark ruling known as Roe v Wade. It comes as the US Supreme Court now has a 6-3 conservative majority.

“The threat is very real,” said Marge Baker, executive vice president at People for the American Way, a progressive political advocacy group that supports abortion rights, about the outcome of the Mississippi case.

“The far-right, aided by Republican allies, have been working to pack the courts with anti-abortion foes. We could see Roe v Wade totally undermined,” Baker told Al Jazeera in a phone interview on the eve of the Supreme Court hearing.

In 1973, the Supreme Court ruled in Roe v Wade that women have a right under the US Constitution to obtain an abortion anytime before they reach 24 weeks of pregnancy, the point at which a fetus was judged viable.

That decision was upheld and revised in a second landmark case in 1992, Planned Parenthood v Casey, that held that US states could not impose an “undue burden” on women seeking an abortion before 24 weeks.

In 2019, the Fifth Circuit US Court of Appeals struck down the Mississippi abortion law as unconstitutional, ruling that “in an unbroken line dating to Roe v Wade, the Supreme Court’s abortion cases have established (and affirmed, and re-affirmed) a woman’s right to choose an abortion before viability.”

Wednesday’s closely watched Supreme Court arguments in the Mississippi case, formally known as Dobbs v Jackson Women’s Health, will focus on whether the abortion law should be upheld or struck down as unconstitutional as lower courts have ruled. 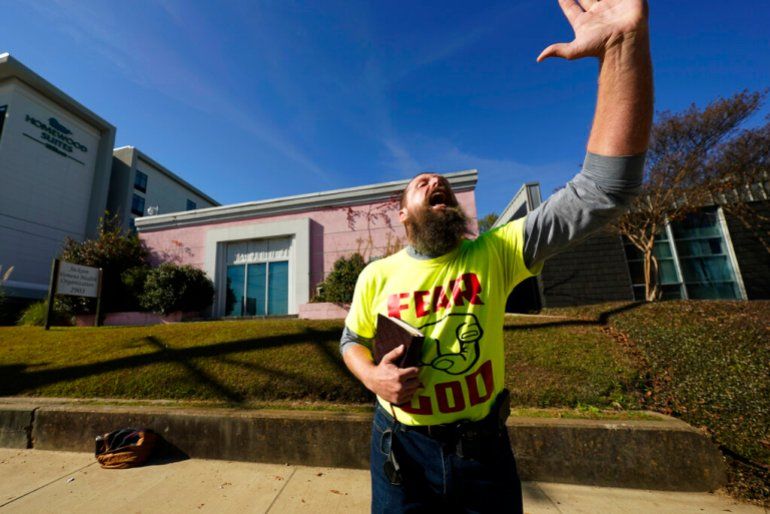 Allen Siders, an anti-abortion rights activist, preaches outside of the Jackson Women’s Health Organization, a state-licensed abortion clinic in Jackson, Mississippi on November 30

“This is the most significant opportunity that the court has had in 50 years to correct the overreach of Roe versus Wade and subsequent abortion decisions,” said Mallory Quigley, vice president at Susan B Anthony List, a political group opposed to abortion.

Anti-abortion rights advocates are hoping conservative justices on the court will overturn what they describe as an “arbitrary” precedent set by Roe v Wade.

For years, they have argued that the Supreme Court erred in its decision in that case, while pushing to install judges on federal courts who would reverse the ruling.

“We want states to have the ability to pass laws that reflect the values of the people, to use the democratic process to achieve consensus, and consensus is going to look different depending on where you are,” Quigley told Al Jazeera.

A ruling striking down Roe v Wade would have an immediate and consequential impact. About half of US states already have laws on their books restricting abortion that would take effect automatically if the high court upholds the Mississippi law.

“We could see women and families really suffering because they don’t have access to abortion care,” Baker said. “People who are already facing discriminatory barriers to health care will have yet one more huge barrier.”

Last month, tens of thousands of people demonstrated in cities across the US to call for abortion rights to be protected – and to denounce a Texas state law that has effectively banned abortion after six weeks of pregnancy.

In November, the US Supreme Court heard separate challenges to that Texas legislation, which allows private citizens to enforce the ban by seeking financial judgments against abortion providers. 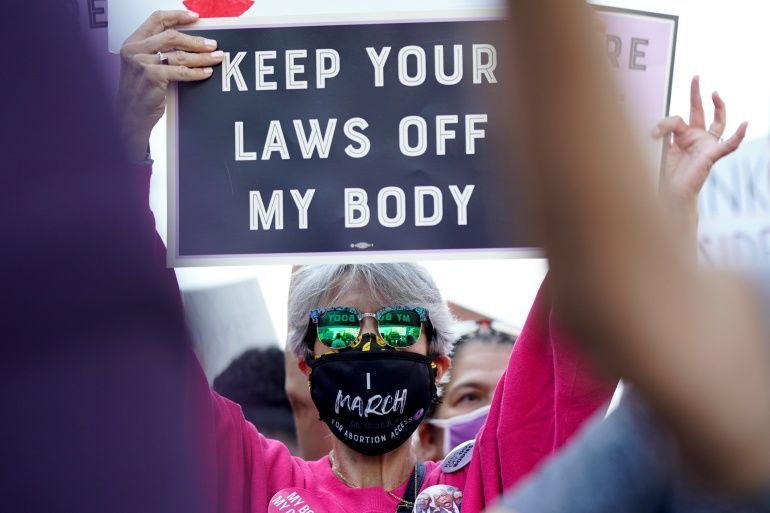 A supporter of reproductive choice takes part in the nationwide Women’s March, in Washington, DC

But women’s rights advocates have raised fears over how the conservative majority of the top court will affect its decisions in both the Texas and Mississippi cases.

In his four years in office, former President Donald Trump appointed three new conservative justices to the court, including Justices Neil Gorsuch and Brett Kavanaugh, who have already signalled a willingness to overturn Roe.

The newest justice, Amy Coney Barrett, is believed by court watchers to be against abortion rights, and open to reversing the court’s previous rulings – at least in part. “The question is how much freedom the court is willing to let states have in regulating abortion,” Barrett said in a 2016 lecture.

Meanwhile, the Supreme Court’s decision in the Mississippi case, which is likely to come down in the months ahead of the 2022 mid-term elections, will hold considerable political implications.

“If you want to see a revolution go ahead, outlaw Roe v Wade and see what the response is of the public, particularly young people,” said Democratic Senator Jeanne Shaheen.

Any reversal of Roe v Wade would also run counter to public opinion in the US, where abortion rights are broadly favoured – even among Republican voters and evangelical Christians.

Sixty percent of Americans said the Supreme Court should uphold its precedent in Roe v Wade, according to an ABC News/Washington Post poll conducted between November 7 and 10, 2021.

Only 27 percent said the court should overturn that precedent-setting decision.

The same survey also found that 75 percent of respondents believed decisions about abortion and reproductive health should be between a woman and her doctor.