Michael Gove’s Homes for Ukraine scheme risks operating as “Tinder for sex traffickers” according to experts. The warning comes as evidence emerges that UK-based criminals are targeting women and children fleeing the war.

A letter from 16 refugee and anti-trafficking organisations to communities secretary Gove warns that the scheme in its present form is potentially dangerous for refugees who have fled Ukraine.

It says the initiative, which allows would-be hosts to be matched with Ukrainians seeking sanctuary in the UK, effectively mimics the dating app Tinder’s signature “swipe left, swipe right” approach to rejecting or selecting a partner, and has insufficient safeguards.

Initial evidence from the letter’s signatories, which include Refugee Action, Refugee Council and the Helen Bamber Foundation, said traffickers had already made apparent attempts to target Ukrainian women and children, as had slum landlords.

Louise Calvey, head of safeguarding at charity Refugee Action, said she was aware of a UK resident wanting to offer accommodation only to an orphan, while another had asked to house a single Ukrainian woman because they wanted help with their childcare. Launched just over a week ago, Gove’s scheme prompted a huge response, with about 150,000 offers of support.

However the Department for Levelling Up, Housing and Communities (DLUHC) has not said how many people have arrived in the UK under the scheme, saying it would “set out full details of the [number of] visas granted” this week. 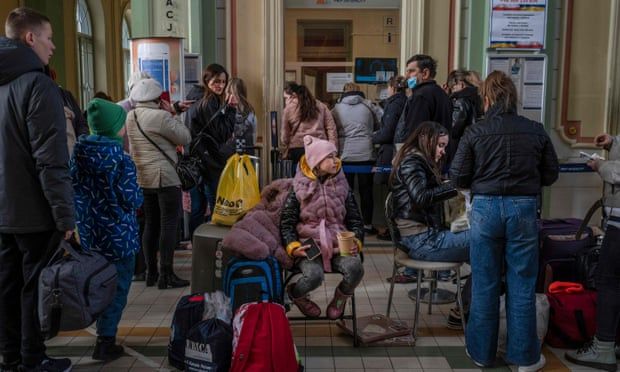 Ukrainian refugees in the railway station in Przemysl, south-eastern Poland.

Some families who have applied to be sponsors have complained that the system is too complicated. Calvey said: “We are concerned that issues with the scheme means that it risks being a Tinder for sex traffickers. We are already aware of people with illegal motives who are advertising on social media.”

Enver Solomon, chief executive of the Refugee Council, said: “We’ve had concerns from people in the Ukrainian community about dubious Facebook pages and other websites offering a matching service that looks like it might be run by people with an ulterior motive like trafficking, exploitation or unscrupulous landlords.”

The letter, sent to Gove on Saturday, says: “By adopting a hands-off approach to matching, there is a high risk that traffickers, criminals and unscrupulous landlords set up matching sites and Facebook pages to prey upon the vulnerable.”

Calvey also called for police to be brought in to regulate the scheme and target individuals and organised crime gangs seeking to prey on Ukrainian refugees.

The National Crime Agency (NCA), which investigates trafficking, confirmed that it had not been asked by the government to regulate the scheme. Although Gove said initially that hosts would undergo “very light touch” criminal records checks, in fact all will be required to have undergone Disclosure and Barring Service (DBS) checks. Yegor Lanovenko, who runs an organisation called Opora, which has drawn up a database for Ukrainians to view sponsors and has recorded 400,000 profile views in a week, said that criminals had also targeted UK residents who wanted to offer Ukrainians a home.

“Everyone just went on Facebook, and posted their passports, houses, addresses with the obvious risks that creates and we’ve seen so many people saying: ‘I just posted on Facebook, now I’ve been scammed five times.’ Who thought that that was going to be a good idea?,” added Lanovenko

Already reports from Poland indicate that women and child refugees who have just fled Ukraine are being targeted by pimps and sex traffickers operating alone and in gangs, according to charities working on the border.

The letter from the 16 organisations “with substantive experience leading resettlement programmes, delivering hosting schemes, supporting refugees and in anti-trafficking” also warns that the scheme is storing up a housing crisis for the autumn: “We are concerned that this scheme, as currently structured, bakes in a refugee housing and support crisis for the autumn. With hosts only having a duty to accommodate refugees for six months, a heavy burden will be placed on local authorities to pick up the pieces if new housing is required.”

The organisations, which also include the No Accommodation Network and Ecpat UK, say that 11,000 Afghans are stranded in hotels months after the fall of Kabul.

A spokesman for the Department for Levelling Up, Housing and Communities said: “No visa is issued by the Home Office until checks have been completed on the Ukrainian applicant as well as on every adult in a sponsor’s household. Local authorities will then run DBS checks on sponsors, with enhanced DBS with barred list checks for those housing families with children or vulnerable adults.

“Under the Homes for Ukraine scheme, Ukrainians will be guaranteed free access to NHS healthcare, including mental health care. They will also be able to work and receive benefits. The Government has also ensured that local authorities have appropriate levels of funding to support new arrivals.”