Jabeur aiming to reach a second Grand Slam final after losing the decider at Wimbledon earlier this year.

Tunisia’s Ons Jabeur has become the first African and Arab female tennis player to reach the semi-finals of the US Open.

Jabeur, who also claimed a notable first in July as the first woman from Africa to reach the final at Wimbledon, sealed a 6-4, 7-6 win over Australia’s Ajla Tomljanovic on Tuesday.

The 28-year-old will now face Caroline Garcia in the semi-finals after the in-form 17th-seed dispatched the 18-year-old Coco Gauff 6-3, 6-4 in Tuesday’s other quarter-final.

Jabeur said she had been infused with belief since reaching the Wimbledon final, where she was beaten in three sets by Kazakhstan’s Elena Rybakina. 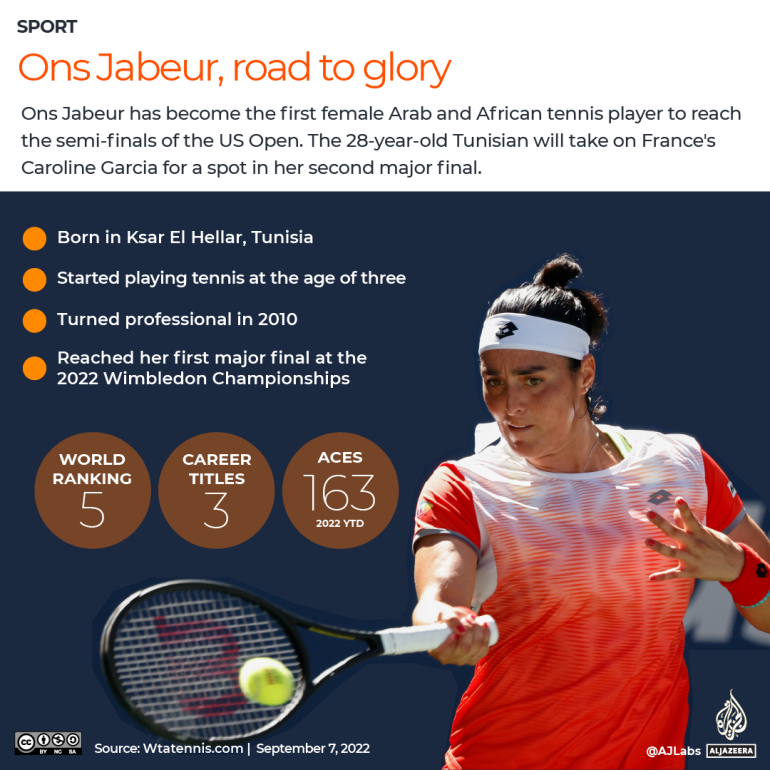 “I believe more in myself,” Jabeur said. “After Wimbledon, it was very positive. Even though I lost the final, I knew I had it in me to win a Grand Slam. And here I am in the semi-finals of the US Open.”

Jabeur is known affectionately as the “Minister of Happiness” by fans in Tunisia for the joy that her progress on court has brought to her homeland.

“We have a lot of courts [in Tunisia], especially in hotels,” Jabeur told Al Jazeera on the sidelines of the Qatar Total Open in 2020.

“So, I started playing because my mum used to go there and she loved tennis and her love for tennis made me also love tennis, which is unbelievable. I’m grateful for her to introduce me to this amazing sport.”

On Tuesday, she admitted she had let her frustration get the better of her when she banged her racquet in frustration several times after coughing up multiple service breaks in the second set.

“I think I’m gonna be fired from my job as Minister of Happiness,” she joked. “It is tough to manage my frustration. I apologise for my behaviour. I really wanted to keep calm but the racquet kept slipping away from my hand.”

Jabeur had reached the quarter-finals at the 2020 Australian Open and 2021 Wimbledon Championships, with her recent runner-up finish proving a breakthrough.

“I think the fact that I broke that barrier of being in the quarter-finals all the time, that did help with my confidence,” she said.

“Knowing that I could make finals in Grand Slams really helped my game, just trying to build that experience to go into second weeks in grand slams. It was very tough coming here, you know, just the hard court season like wasn’t that great for me. So I was trying to build more and more confidence on hard courts.

“Wimbledon helped a lot, for sure.”