Wrapped around a mature oak tree, a light-filled shipping container home embraces the outdoors in more ways than one.

In the East Hampton village of Amagansett, Manhattan-based MB Architecture has completed their largest-and most complex-prefab project to date: a 1,800-square-foot shipping container home that emphasizes indoor/outdoor living. 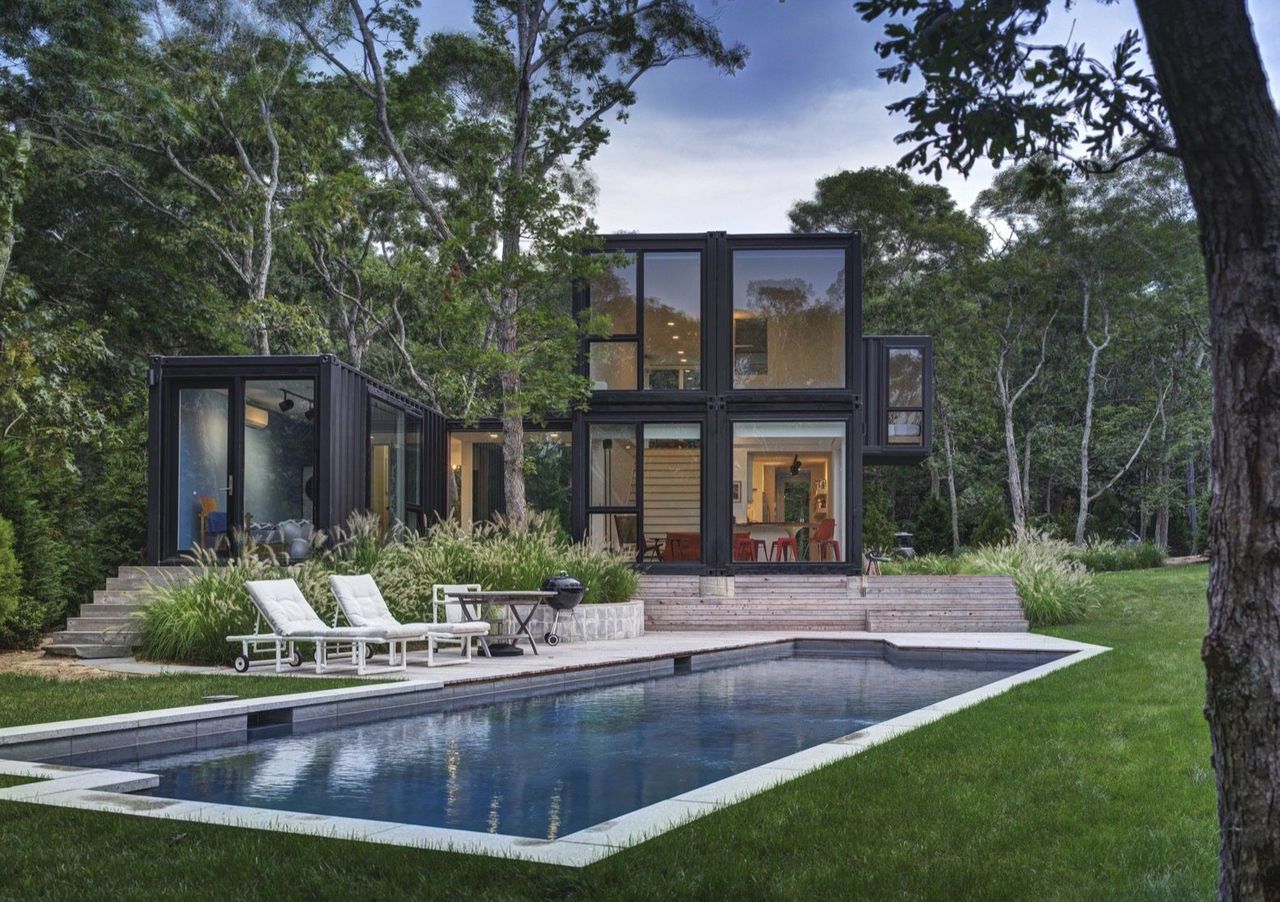 The container house is designed to wrap around an existing oak tree.

"[It’s the] culmination of 10 years of research prototyping," says Maziar Behrooz, founder of MB Architecture. His award-winning cargotecture work drew the attention of the clients, a couple with three young children, who had been looking for an alternative to the ubiquitous wood-shingled homes in the Amagansett area.

"The fact that our prefab projects are less expensive and take less time to build was an additional incentive," adds Behrooz. 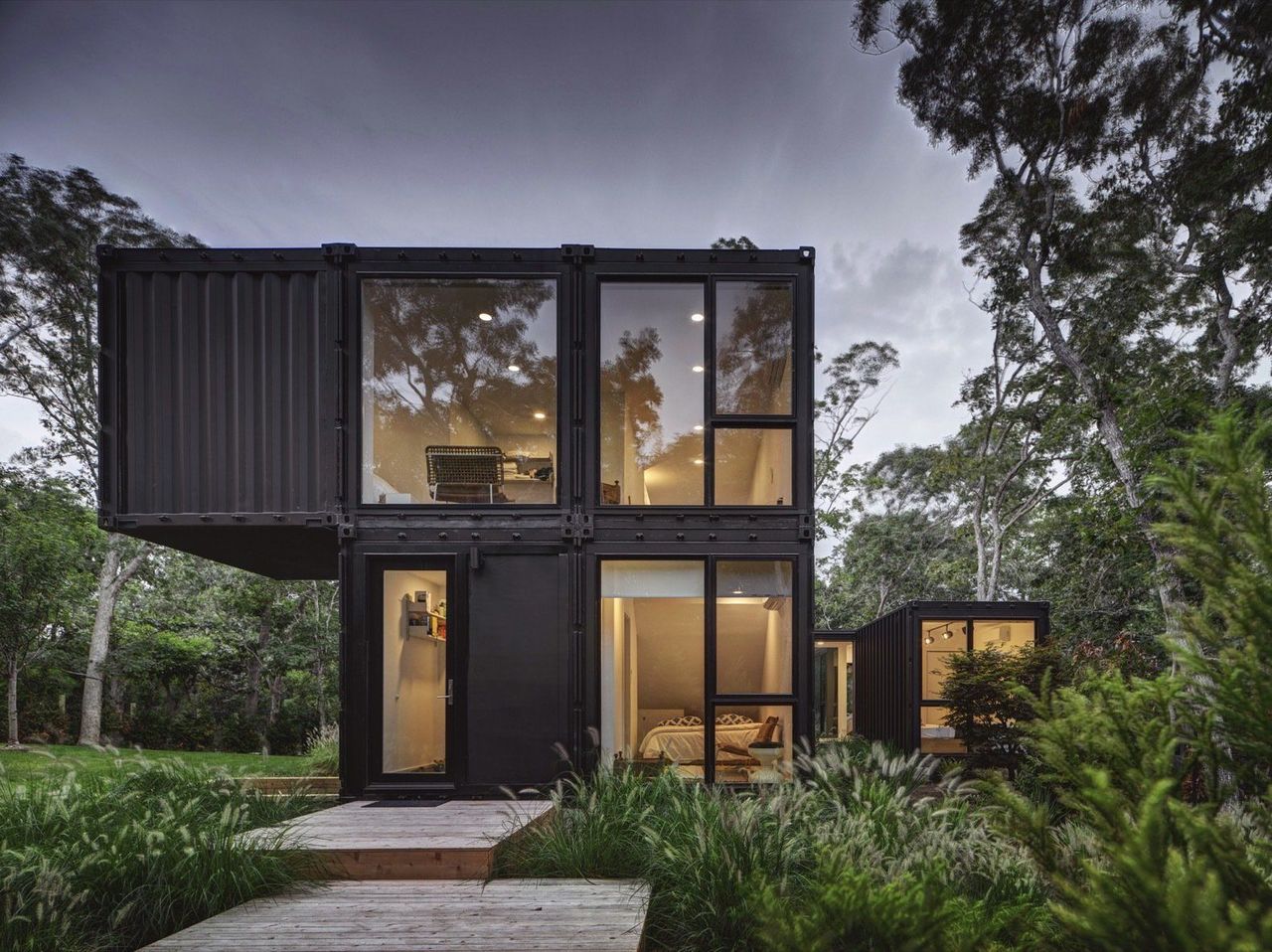 The home is located on a wedge-shaped wooded lot with only one neighbor to the north. Mahogany decking connects the front door to the parking pad.

The home, dubbed the Amagansett Modular House, is modeled after MB Architecture’s insta_house-a scalable, prefab structure made of four 40-foot-long shipping containers that can be stacked together and installed in just one day.

To meet the clients’ requirements for a four-bedroom, three-bath retreat, the architects expanded upon the insta_house blueprint with an additional 40-foot container on the north side-connected to the main double-height volume via a glassed-in walkway-as well as a 10-foot container that hangs off the second floor. 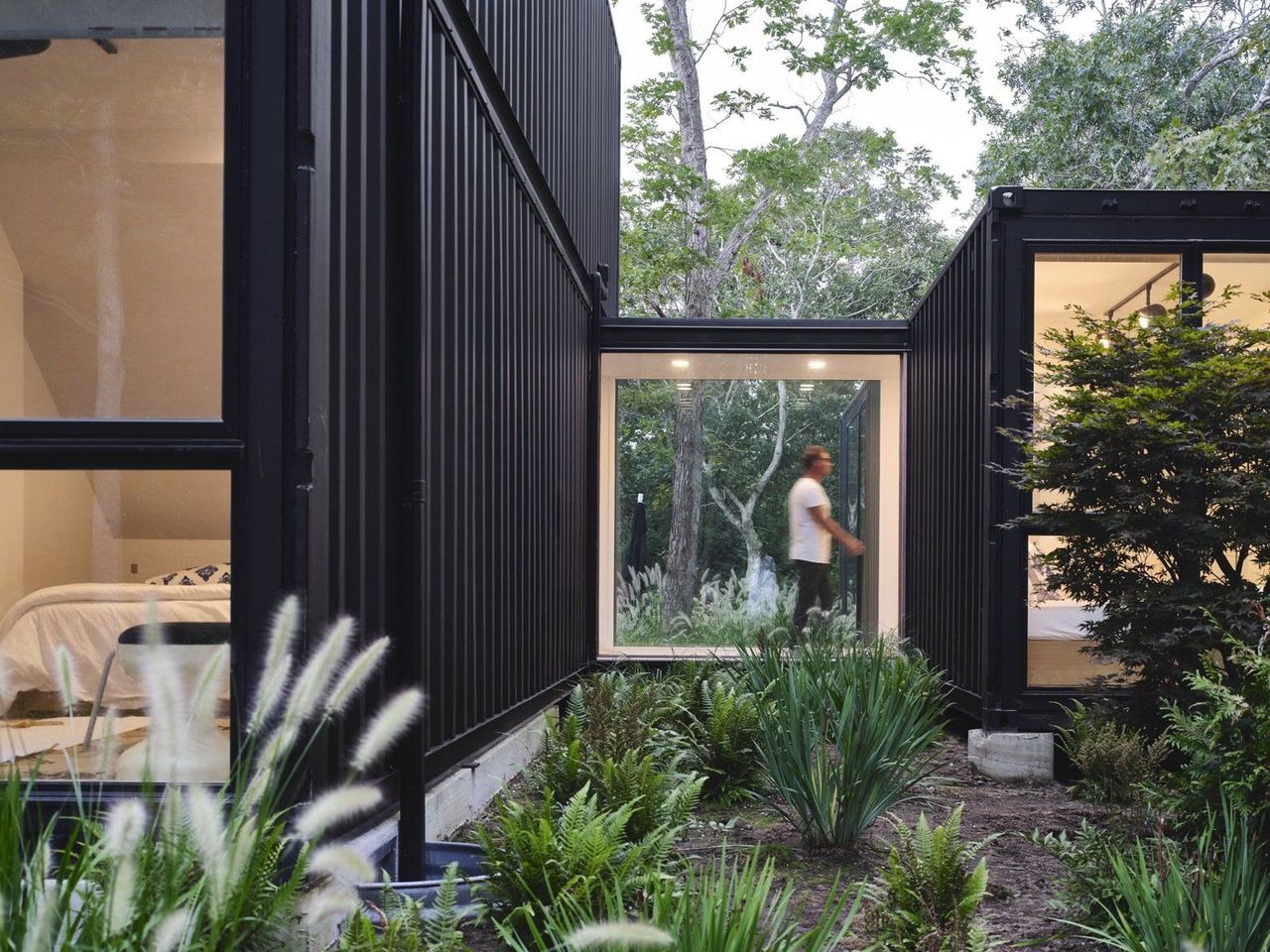 A glassed-in walkway connects the open-plan living areas to a separate bedroom wing. 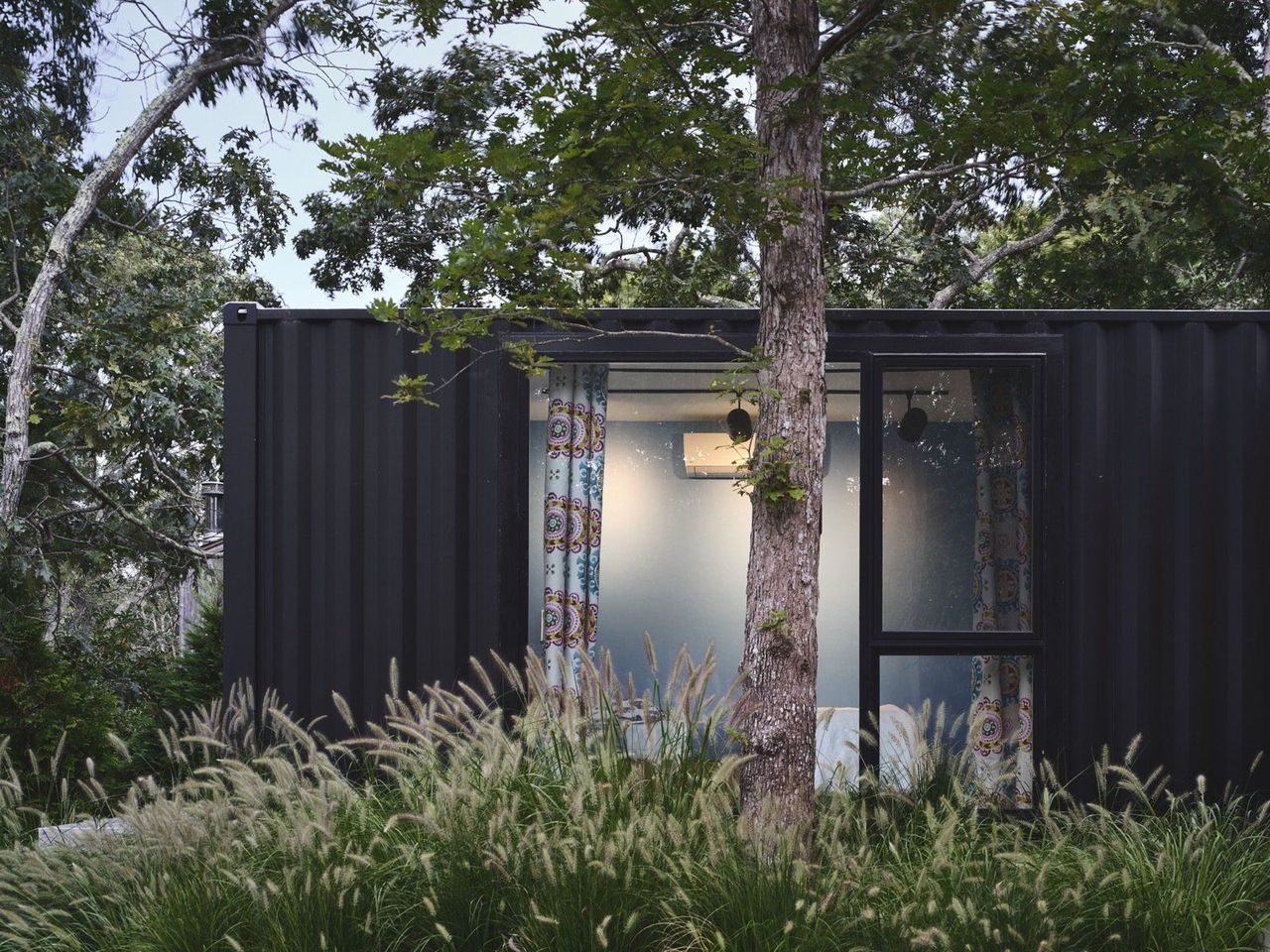 A glimpse into one of two bedrooms housed in the single, 40-foot container placed on the north side of the site. 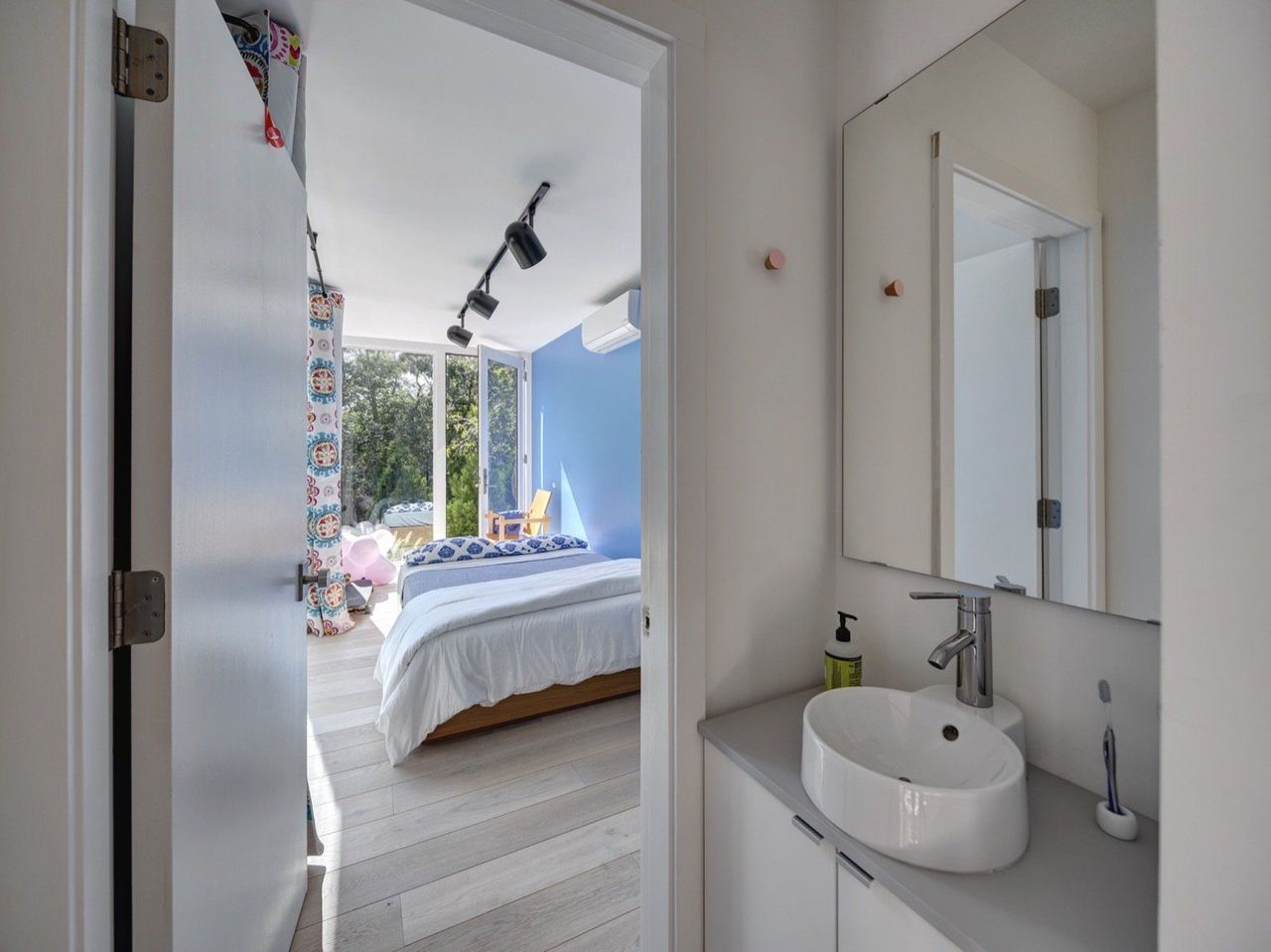 The separated bedroom wing includes one shared bathroom. Large windows and glazed doors fitted into either end of the container create an indoor/outdoor living environment.

These modifications also respond to the sloping site, which informed the placement and orientation of the west-facing building. The external corrugated metal walls were painted black to help the building recede into the landscape, while multiple floor-to-ceiling windows and glazed doors create seamless connections between the interiors and the outdoors. 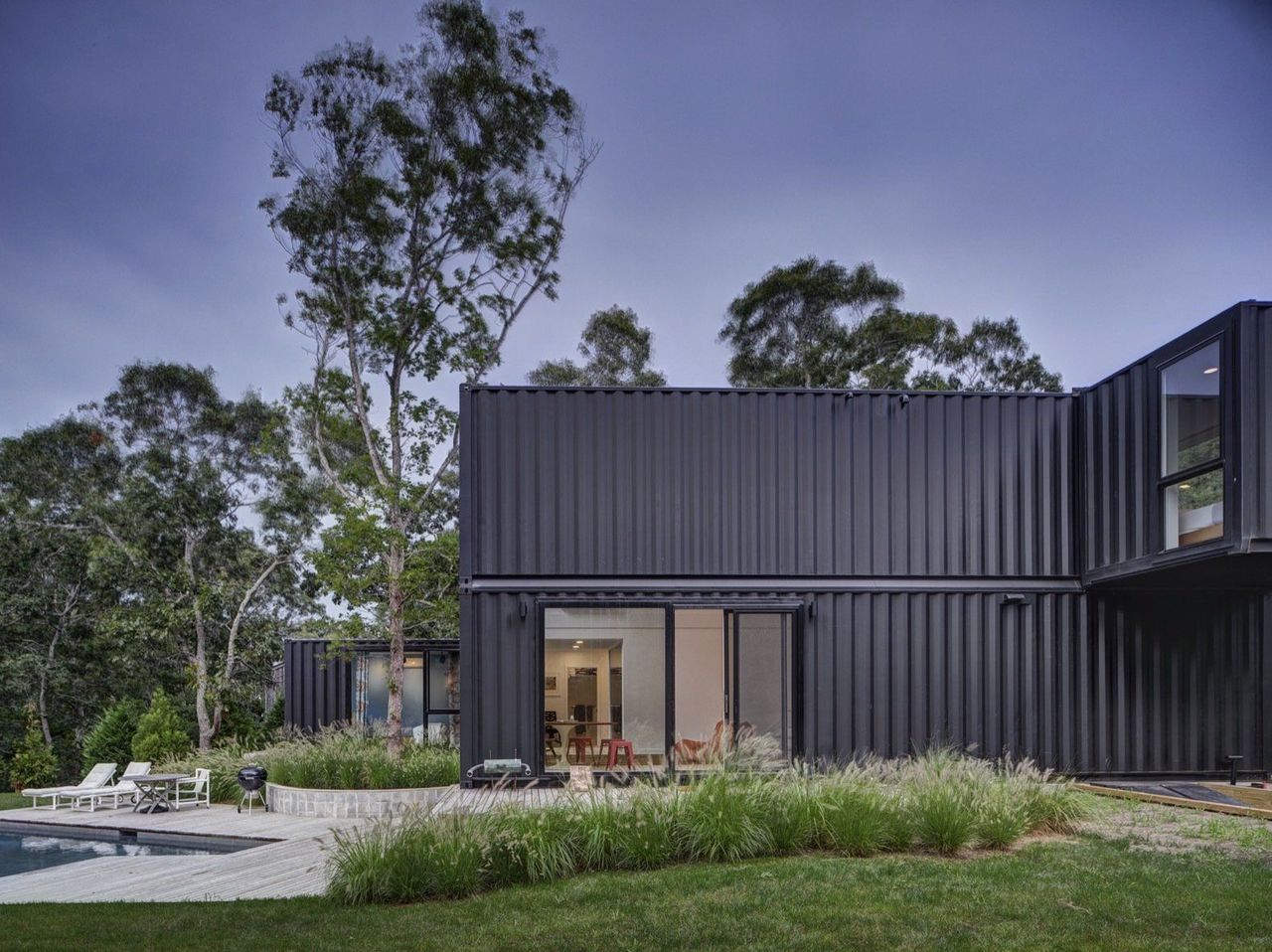 The architects applied BM marine-grade paint to the containers’ corrugated metal walls. The home is deliberately compact to match the scale of the neighborhood homes 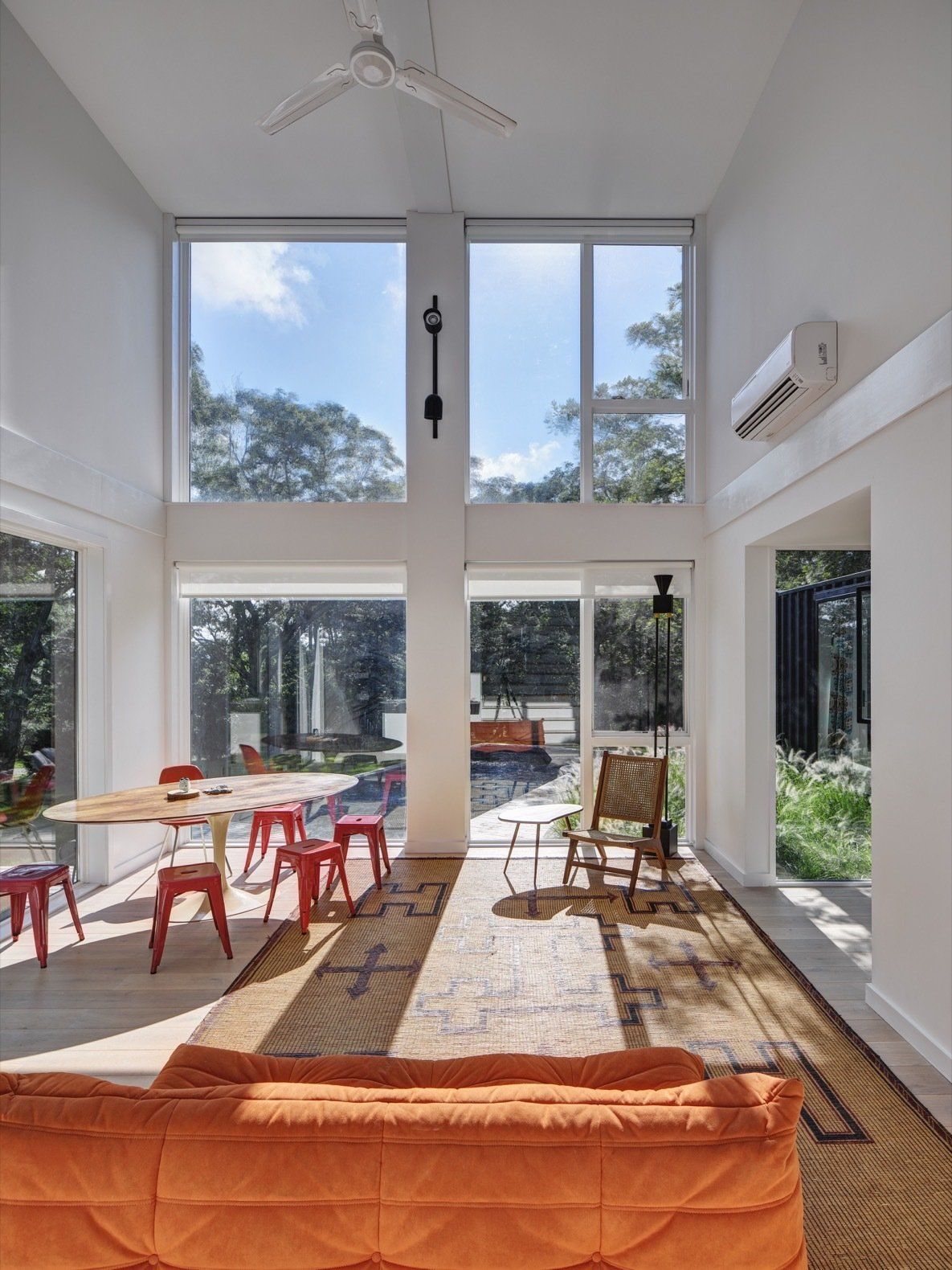 Taking advantage of the double-height space, the architects created a wall of windows to flood the living area with natural light and frame west-facing views. "At sunset, rays of light literally go all the way through the house," note the architects. 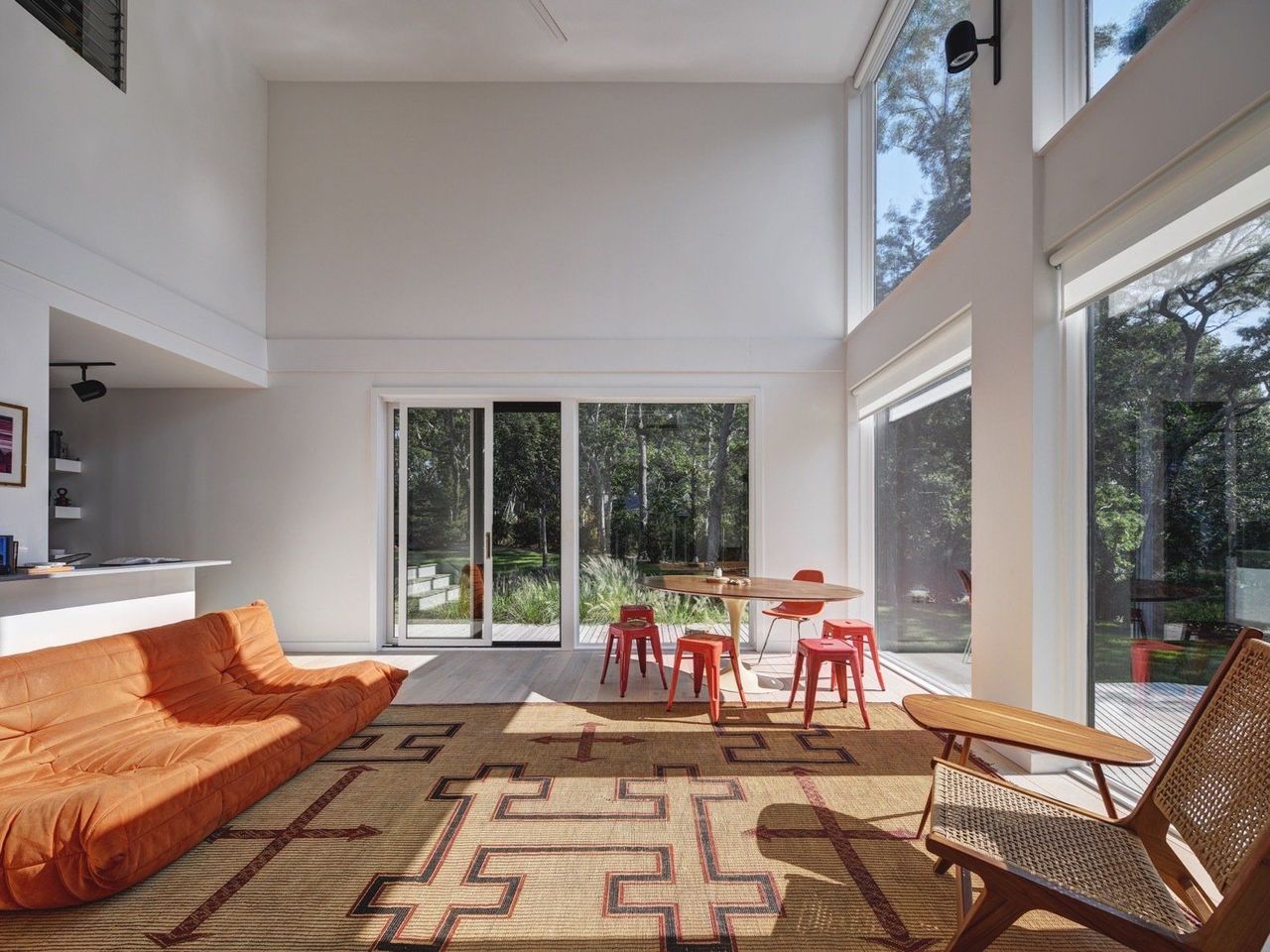 The sun-soaked living area is furnished with a vintage reed mat made by the Tuareg tribe of North Africa (purchased at a flea market), a Toga sofa from Ligne Roset, and a Saarinen table with Tolix red stools.

"We wanted to create a comfortable, playful, and fun interior for both kids and parents," explains Behrooz of the open layout and dramatic, geometric facade. "And to illustrate how a small house may feel very spacious." 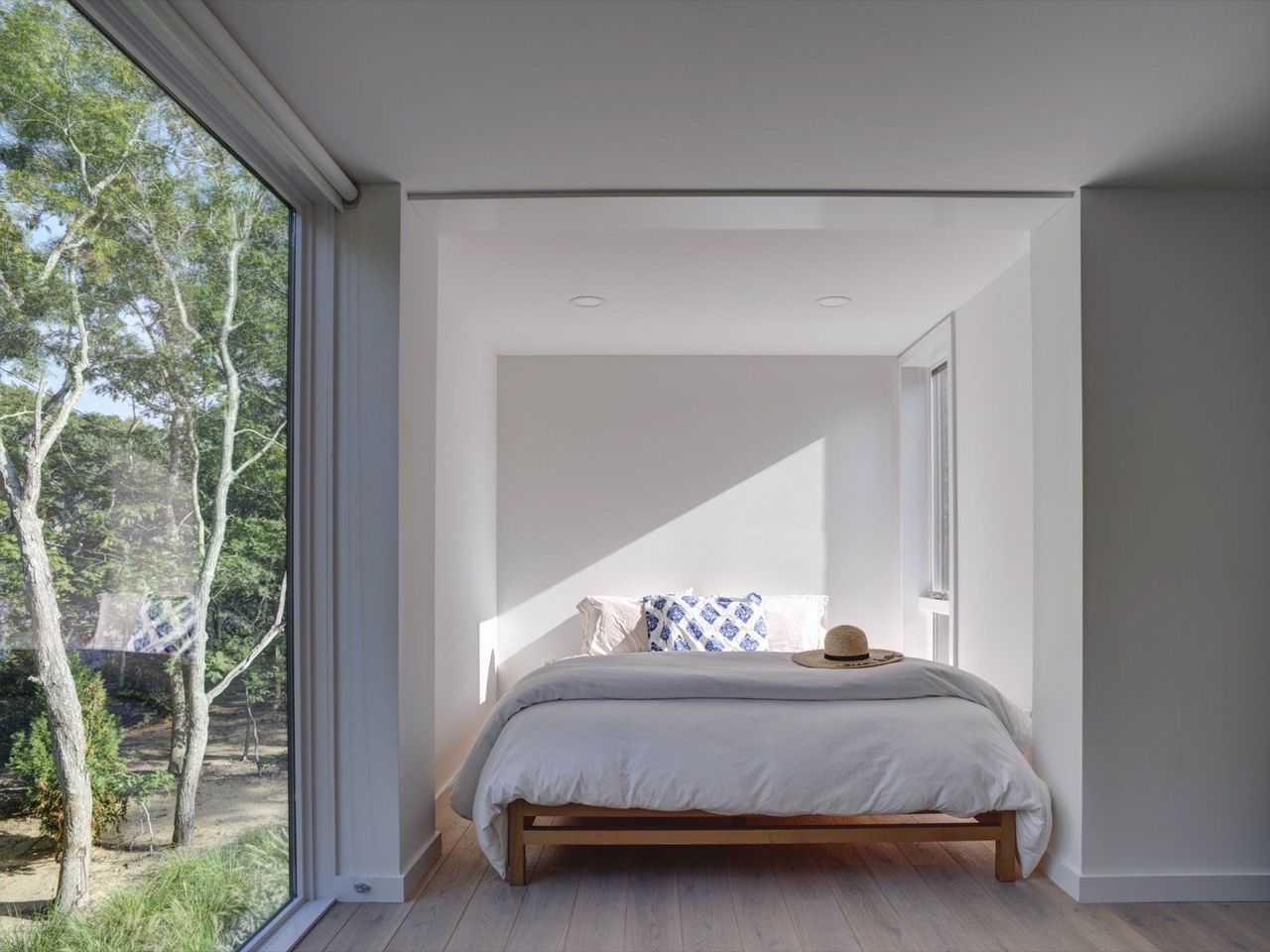 A 20-foot container cut down to half its length was attached to the second floor to house the master suite. 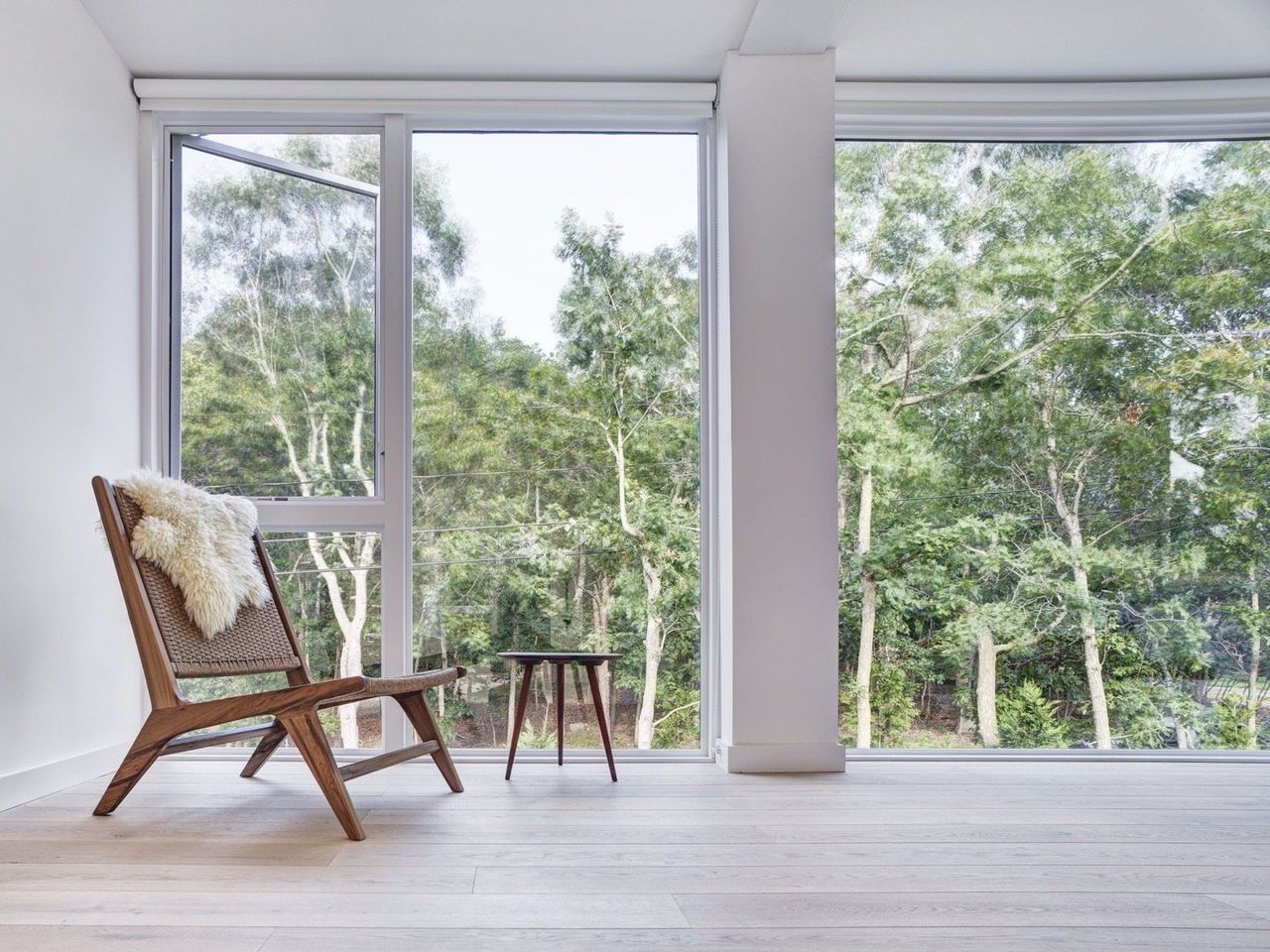 Large windows in the upstairs bedrooms create the illusion of being immersed in the treetops. The custom furniture is by Santiago Campomar. 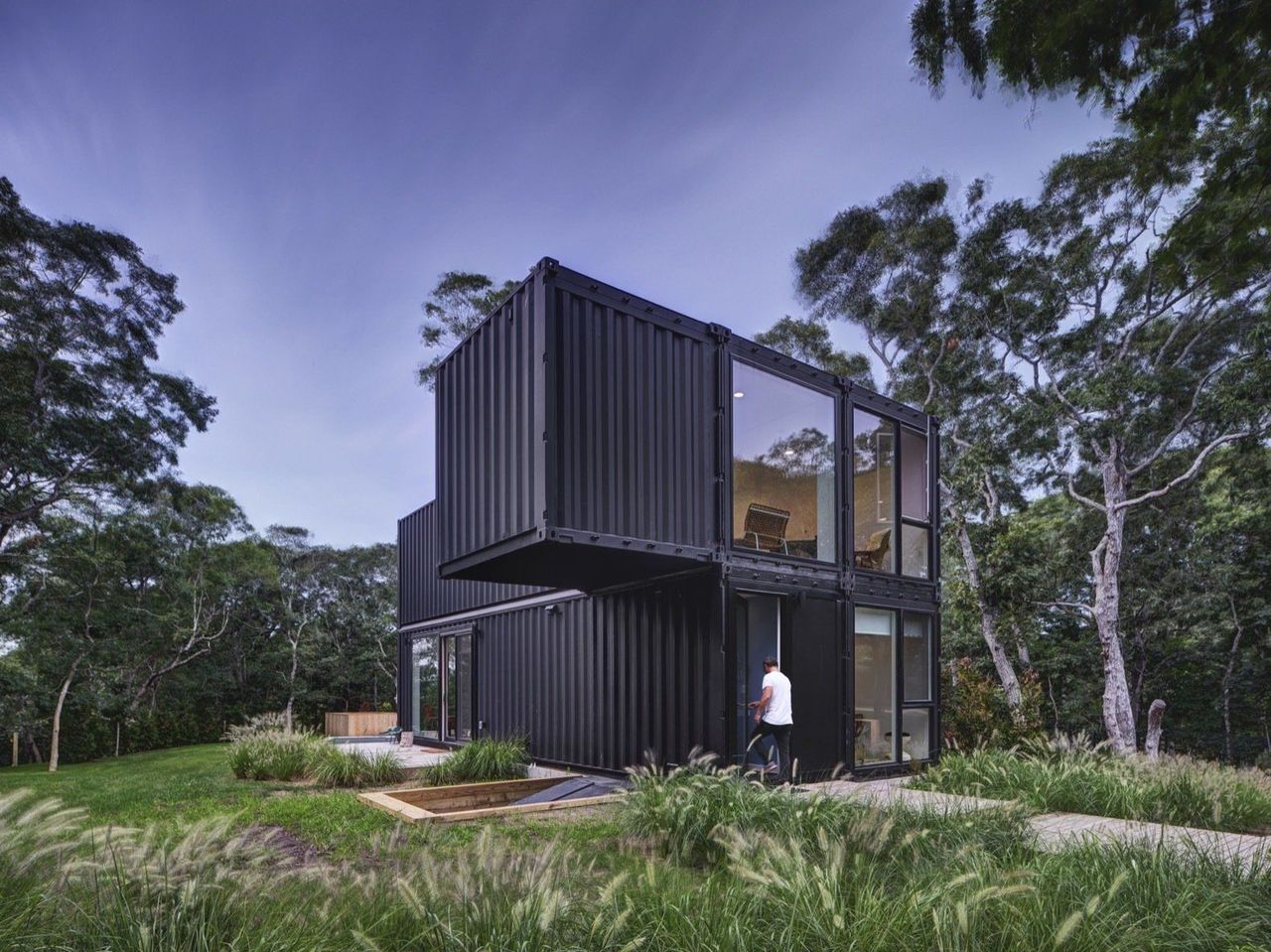 "The structural design of the 10' pop-out on the second floor is unique. There are no beams under it-it looks afloat," explains Behrooz, who notes that the pop-out was originally cut down from a 20-foot container. "Technically it is not a cantilever-but it is structured from the top (roof) and held back in tension, down to the foundation on the opposite side. It’s kind of a structural breakthrough-we used the inherent structural strength of the containers to our advantage."

The containers were prefabricated off site before being trucked to the site and installed in two days. The kitchen cabinets, bathroom tiles and fixtures, glassed-in walkway, landscape elements, and pool were added in the weeks after installation. 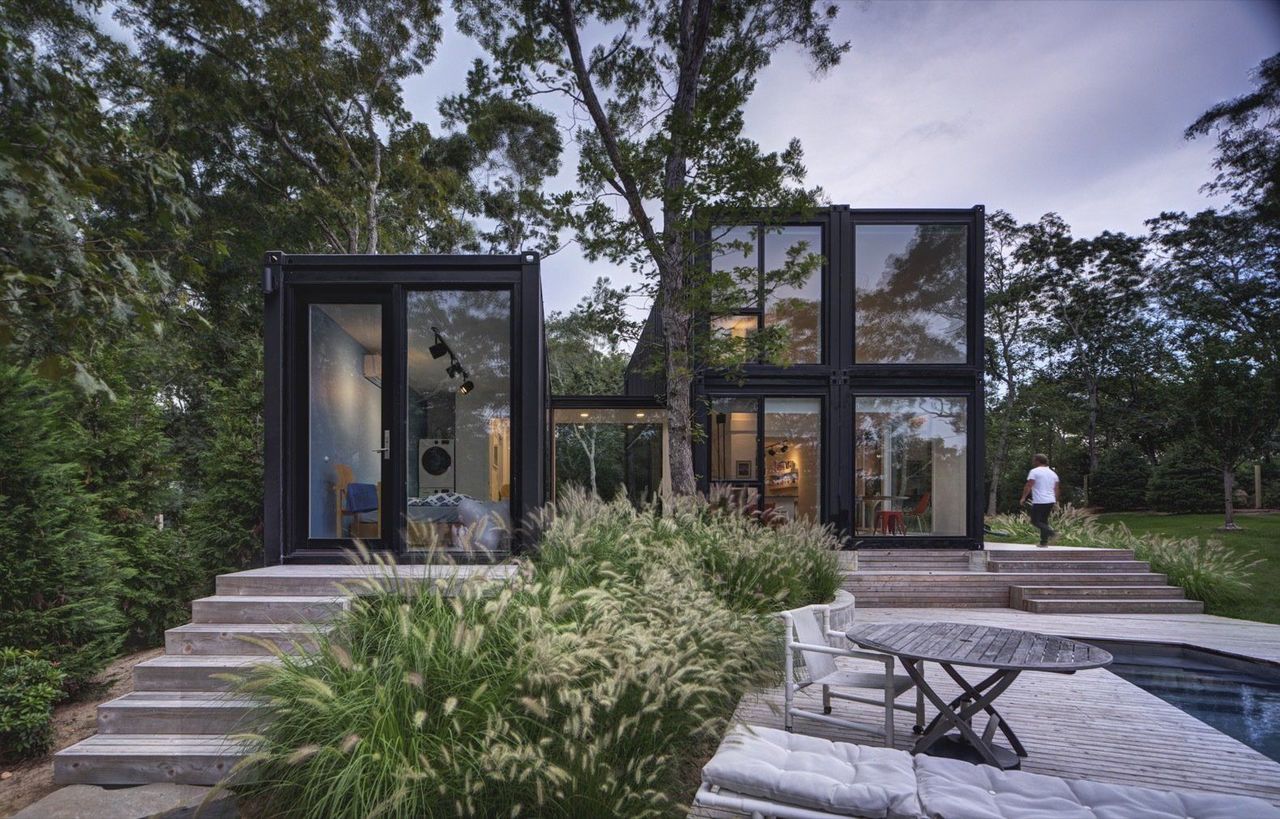 The architecture follows the natural contours of the wedge-shaped site: the building is placed on higher ground on the site’s wider east end, while exterior decking steps down to the pool to the west.

The speed and efficiency of construction also helped reduce costs, which, excluding the landscape elements and pool, were "in the low to mid $300s per square foot," says Behrooz. "While this is a very high number in, say, upstate New York, it’s significantly lower than average for its location on the east end of Long Island, where construction can cost $500 to $800 per square foot. Our cost of construction is region dependent." 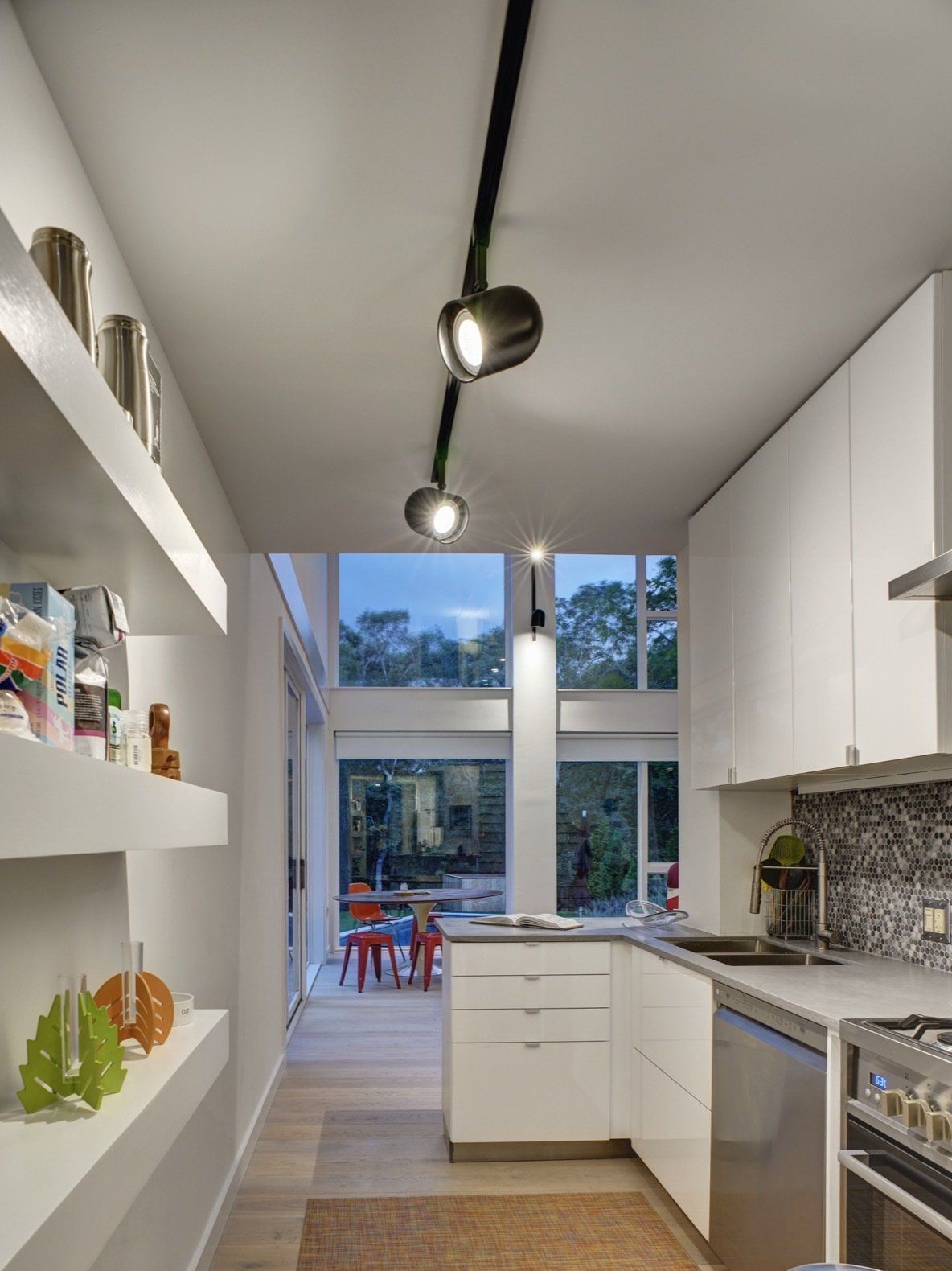 The minimalist kitchen is outfitted with Corian countertops. The floors throughout are bleached oak.

Perhaps the most surprising aspect of the project was how infrequently Behrooz met face-to-face with the clients. The busy couple chose to meet the architects a handful of times, and only twice on site-once when they first purchased the land, and the second time when the house was nearly complete. This arrangement that was somewhat unusual for the practice, which is accustomed to recurrent client meetings. 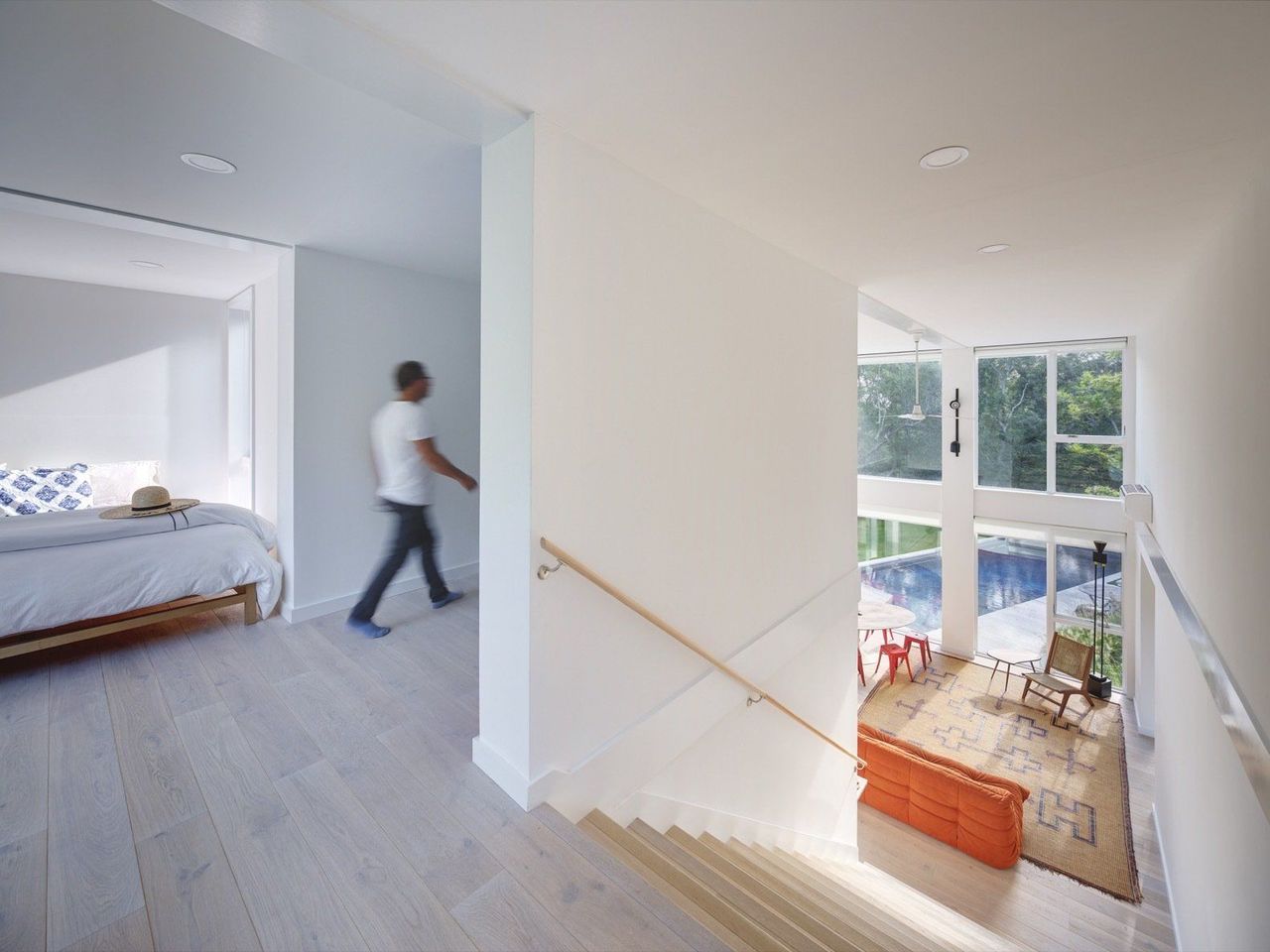 Two signature features of MB Architecture–designed prefabs are a double-height space and a wide staircase. "We love the wide staircase-it becomes a place to sit, and watch sunsets," says Behrooz.

"So, we were a little worried about how they would feel when coming, with their children, to see the finished house for the first time," says Behrooz. "Their reaction was super joyous, and each kid just ran into a room and found their space. Later that day, we received an email from them saying that the house ‘felt like a temple.’" 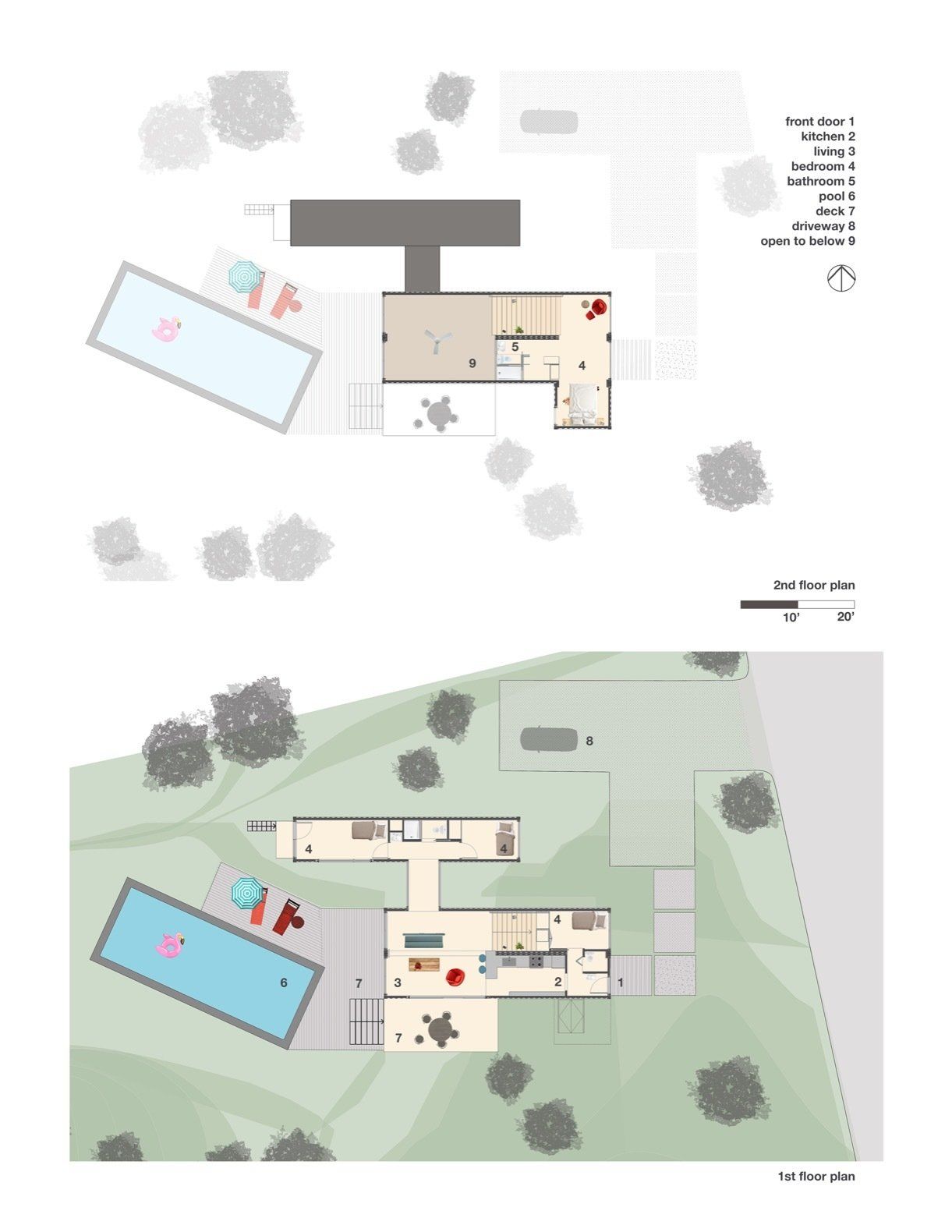 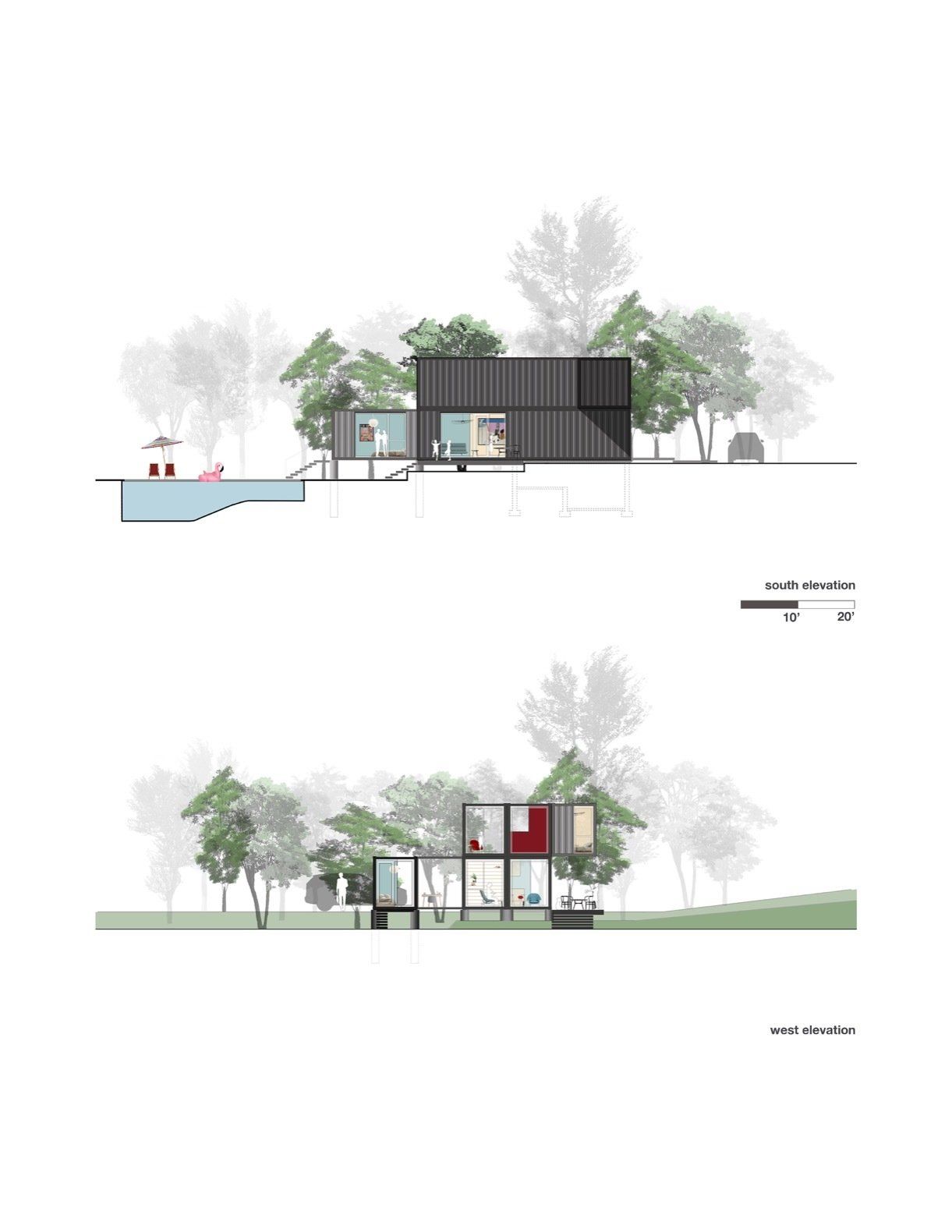