As she’d done before, Griselda Verduzco Armenta tried to cross Mexico’s border with the US earlier this week with dreams of being able to better provide for her two young daughters.

But the 32-year-old’s journey ended in tragedy when authorities say she fell from atop the US border wall in Arizona, accidentally became entangled in a climbing harness that she had used to scale the barrier, and was choked to death while upside down.

Authorities on Saturday released the most complete account yet of Verduzco’s death the night of 11 April, which vividly illustrated how perilous the journey across the US-Mexico border can be for migrants.

The native of Ahome, Sinaloa, Mexico, was trying to scale a section of the border fence near Douglas, Arizona, with the help of migrant smugglers-for-hire colloquially known as coyotes, when she lost her life, a woman identified as a cousin of Verduzco told the news outlet Telemundo.

Verduzco’s companions tried to use a rappelling harness to lower her from the 30ft-tall fence safely on the US side, said Carol Capas, of the sheriff’s office in Cochise county, where the tiny town of Douglas is located.

But her foot and leg became trapped atop the fence, which she had also apparently used a ladder to scale.

She flipped upside down and was trapped dangling like that for an unspecified, but lengthy, amount of time, Capas said.

Border Patrol agents found Verduzco unresponsive after Mexican emergency operators alerted them to a call about a woman being stuck on the fence.

She was taken to a hospital in the nearby city of Bisbee, Arizona, but doctors there pronounced her dead, Capas said.

The local medical examiner’s office has since conducted an autopsy, ruling Verduzco’s death an accident and determining that she was asphyxiated as a result of hanging upside down, Capas added.

Verduzco is among at least 7,000 people to have died on the US border since 1998 while attempting to enter the country, according to Guardian reporting first published in 2021.

The latest tragedy comes after Arizona in 2020 recorded its deadliest year for migrants’ unauthorized crossing of the US border, with authorities saying they discovered the remains of 227 people. 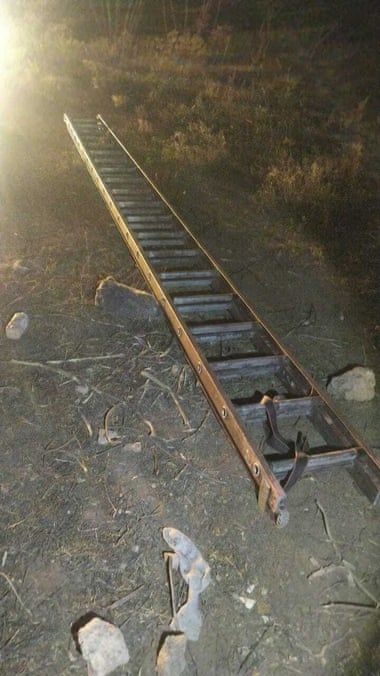 A ladder near a border fence near Douglas, Arizona, where a woman died on 11 April.

Earlier this month, a man died after falling from a section of the border wall in Texas.

Verduzco’s relative told Telemundo that the woman was raising a daughter who is about a year old and another aged nine.

The relative said Verduzco had attempted to cross the border into the US before, calling it “an obstinate dream” to make it into the country in hopes of finding a more secure future for her children.

“One says it’s better over there and everything,” the relative said. “But I say no.”

The relative said Verduzco was making the crossing with the help of so-called coyotes, but they abandoned her when she became trapped without a way down.

“The coyotes tried and tried to get her down, but they couldn’t,” the relative said, without elaborating on how she got the information from the scene at the fence.

The Mexican consul in Douglas, Ricardo Pineda Albarran, on Saturday issued a statement condemning those who purport to help people safely cross the US border without permission in exchange for a fee.

“They fooled this woman and her group that it was safe,” said Pineda, who is working with Verduzco’s family to return her remains to Mexico. “Imagine how distraught this family is. We condemn this.”

Authorities stopped short of identifying the section of barrier that Verduzco was trying to climb over. But some of the final border wall construction completed before the end of Donald Trump’s single presidential term was around Douglas, where workers erected 30ft-tall steel columns on US Bureau of Land Management federal property.

Images of the fence in question released by the Cochise county sheriff’s office show the barrier is comprised of steel beams.