Seeking a deeper connection to the world, Angela Maxwell set off to walk it alone. Six years and 20,000 miles later, she brought that connection home.

"Why?" It's a simple question, and one that people ask Angela Maxwell frequently. Yet until recently, the American struggled to answer why, exactly, she upended a perfectly fine life in pursuit of a big dream. But for Maxwell, "why" is a question worth answering. After all, she embarked on a journey that very few people attempt: in 2013, she decided to walk around the world – alone.

A solo walk of this magnitude wasn't something Maxwell had planned. In fact, she left only nine months after having overheard a conversation in her art class about a man who supposedly walked around the world.

Maxwell's journey did not sprout from a place of loss, defeat or personal crisis. When she decided to embark on a long-distance walk, she was in her early 30s, ran a successful business and was in a relationship. "I thought I was happy," she said, "but in retrospect, I realised that I was searching for more… for a deeper connection with nature and people – by living on less and connecting with the world around me." 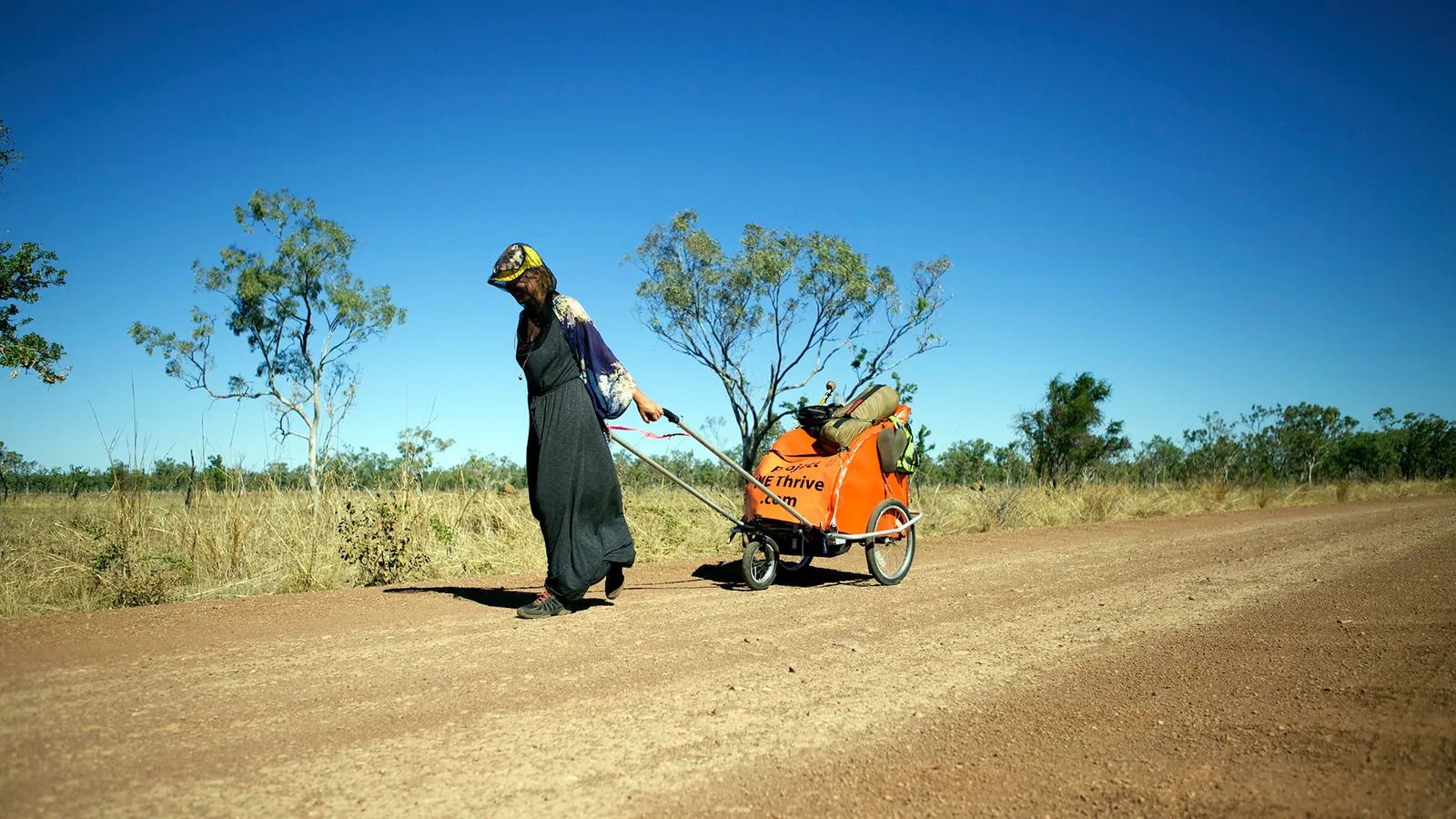 The best way to find that, she figured, was by setting one foot in front of the other. Walking would minimise her carbon footprint, plus the slow pace meant that she could fully immerse herself in nature, meet people she would otherwise only drive past and get to know other cultures in a way that is unique to long-distance walkers.

As she prepared, Maxwell found a whole world of women explorers to embolden her. She fell in love with the writing and slow travel style of Robyn Davidson, who traversed Australia with camels. She learned about long-distance walker Ffyona Campbell; and read up on Rosie Swale-Pope, who hitchhiked from Europe to Nepal, sailed around the world, crossed Chile on horseback and, at age 59, began jogging around the world.

"I read their books in hopes of finding encouragement – and I did – by learning about their challenges and struggles as well as their triumphs. Each woman's story was vastly different and it gave me the confidence to give my walk a try," Maxwell said. 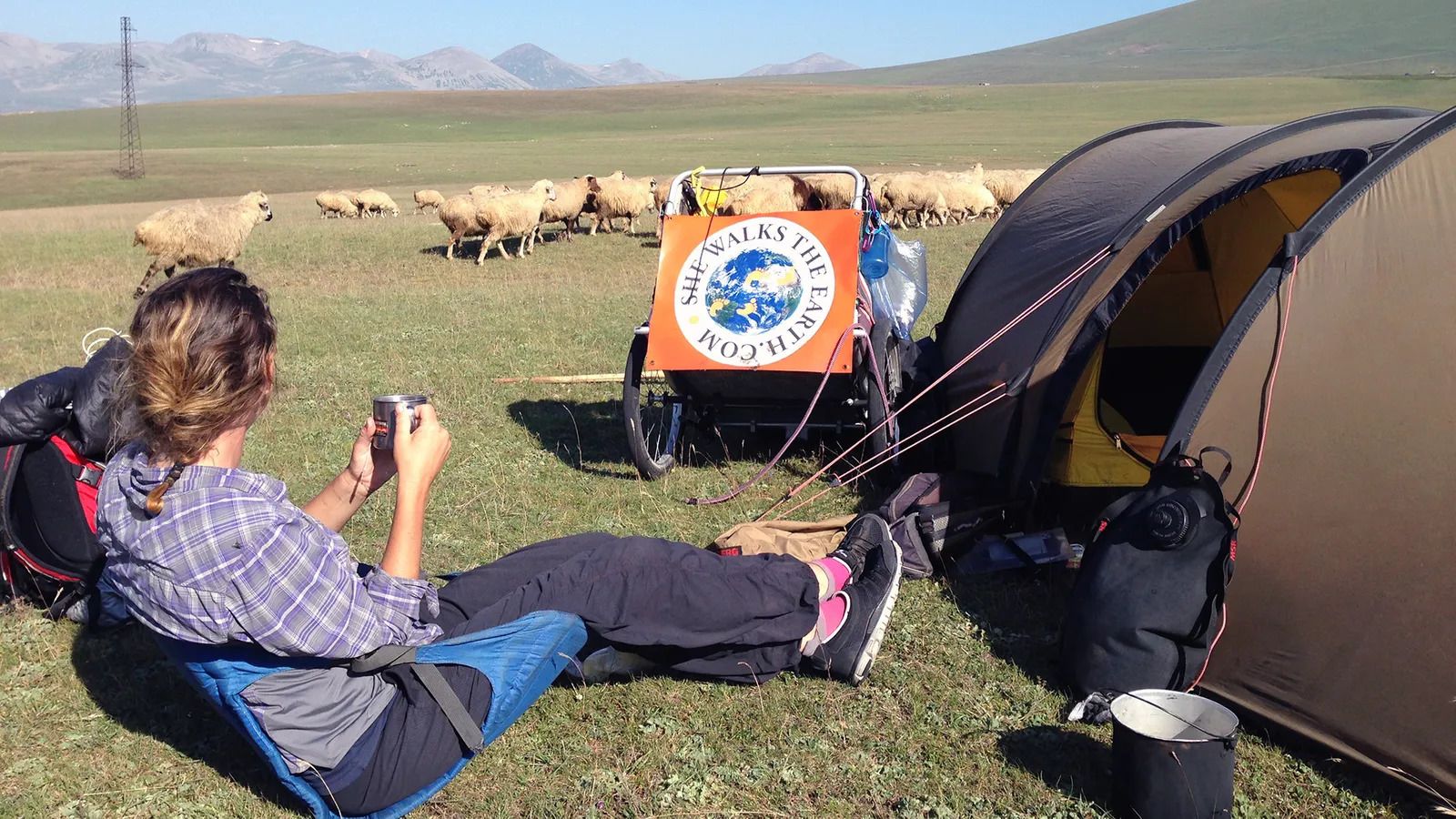 Once she made the decision to go, Maxwell sold all her belongings and organised the necessary gear. She packed a cart with 50kg of camping equipment, dehydrated food, a military-grade water filter and four seasons of clothing. Maxwell left her hometown of Bend, Oregon, on 2 May 2014 and headed into an adventure so grand it was probably best she didn't know exactly what was waiting for her along the track.

When I first connected with Maxwell over Skype in June 2018, she was already nearly four years into her journey, having walked more than 12,500 miles in 12 countries on three continents. Curious, I asked her what kind of person it takes to walk around the world. Her face gleaming, she quipped, "a stubborn one". She then added, "It's probably a combination of ambition, a little stubbornness and a pinch of passion – not for hiking as a sport, but for self-discovery and adventure."

Maxwell told me that even though she quickly found her routine – wake up around sunrise, have two cups of instant coffee and a bowl of oatmeal for breakfast, pack up, walk, pitch the camp for the night, eat instant noodles and snuggle up in the sleeping bag – no day was the same. Initially, she set out with a plan, but quickly realised the detours make the adventure. That's why, despite following a general direction, she would always trust her gut feeling of where to turn left or right.

Maxwell would suffer from sunburn blisters and heatstroke in the Australian desert and dengue fever in Vietnam. She would be attacked and raped by a nomad who broke into her tent in Mongolia; hear gunshots while camping in Turkey; and learn to sleep with one eye and one ear open, awake to the vulnerability of deep sleep. Even though it was impossible to know what they would be, Maxwell had anticipated hardships of all sorts. 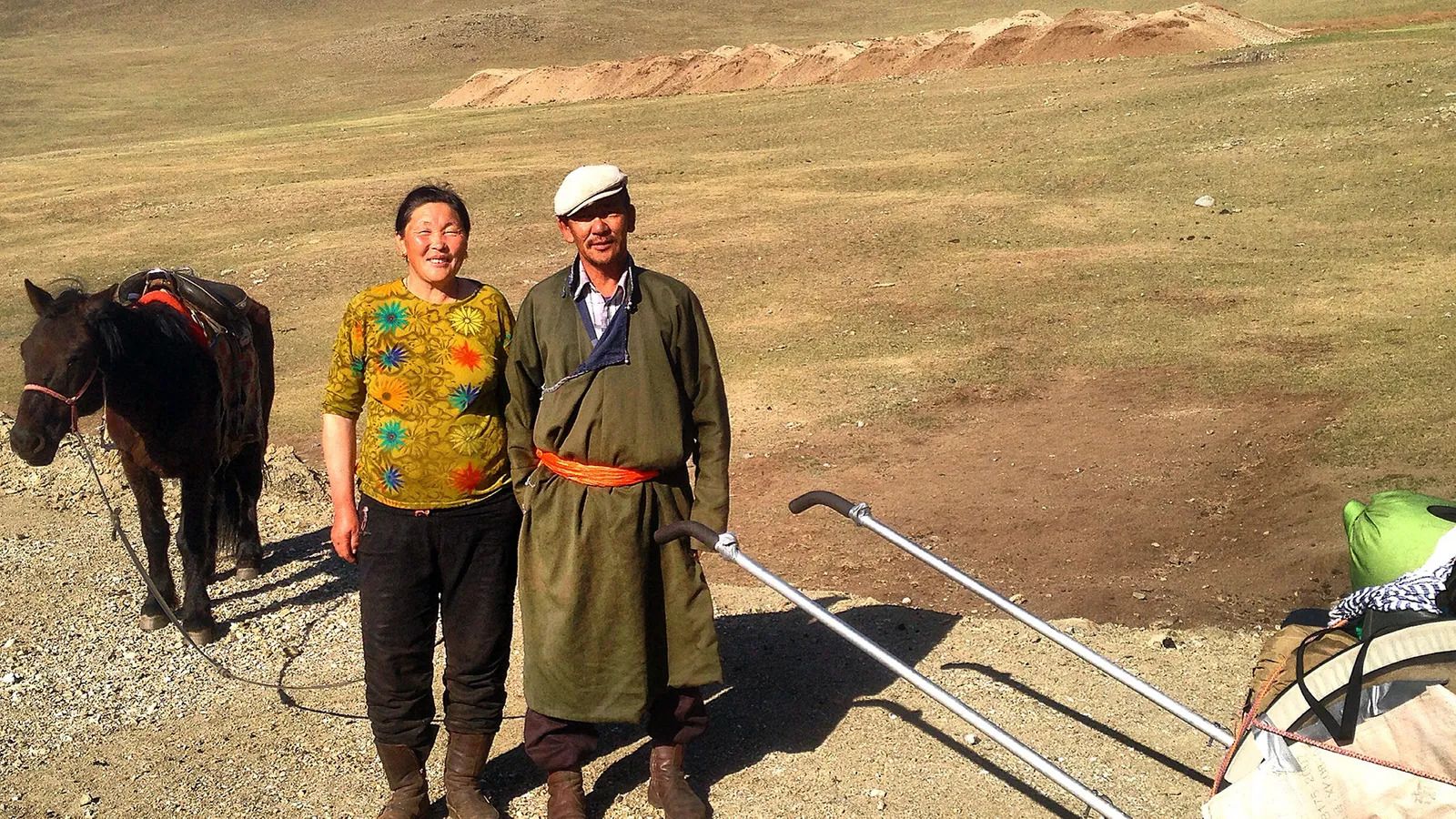 "Still," she said, "I didn't start walking because I was fearless – but rather because I was terrified. I was more afraid of not following my heart than I was of losing everything I owned and loved."

Coping with the trauma of the sexual assault turned out to be a defining moment, one in which Maxwell ultimately resolved to keep walking. While she was still scared, other women's stories of perseverance and strength helped her continue: "I was determined not to let the incident force me to give up this dream of mine and go home. I had left my whole world behind, had nothing to go back to and understood the risks inherent in my journey." Maxwell was walking to discover just how strong of mind and body she could be, even in the face of violence.

Along the way, her slow pace allowed her to be drawn – briefly but deeply – into other cultures. She roamed tiny seaside villages along Italy's Tyrrhenian Sea, soaking up the vibrant atmosphere and accepting invitations to talk, sit and drink wine. In Vietnam, exhausted after reaching the top of Hai Van Pass, she was greeted by an elderly woman who invited her to rest in her small wooden shack at the summit for the night. One friendship blossomed at the border between Mongolia and Russia and led to a reunion years later in Switzerland. Maxwell even became a godmother to the daughter of a woman she met in Italy. 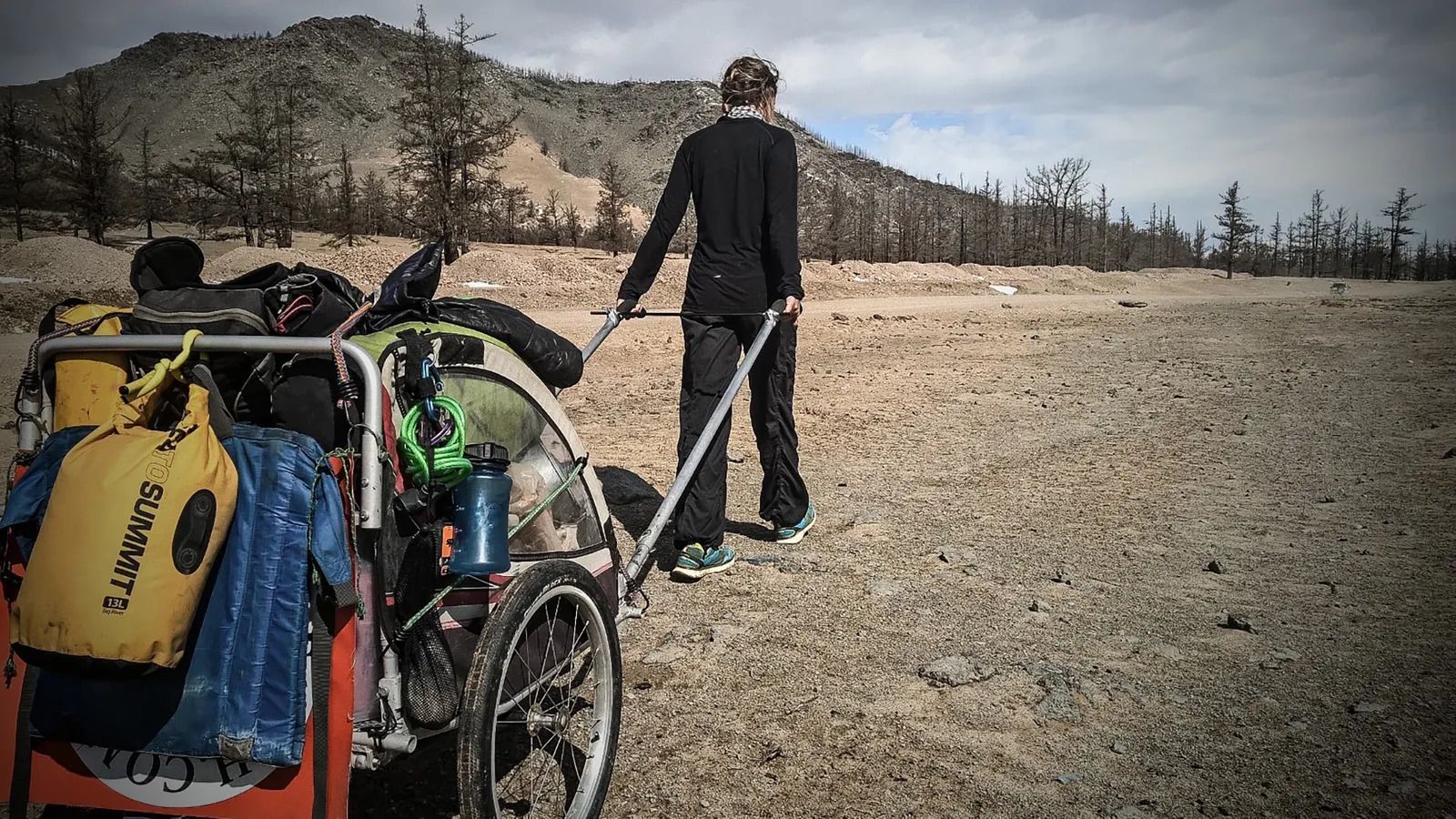 Whether these intercultural encounters lasted seven minutes or seven days, Maxwell always kept two things in mind. First, to be a good listener in order to learn. "Walking has taught me that everything and everyone has a story to share, we just have to be willing to listen," she said.

Along her journey, she learned generations-old family recipes in an Italian village, beekeeping in the Republic of Georgia and camel handling in Mongolia on the historical Silk Road. Second, Maxwell learned the importance of contribution. She chopped wood in New Zealand and handed out food to homeless people in Italy. In Sardinia, she helped an Italian farmer renovate his house.

More often than not, however, Maxwell's stories were her biggest contribution. She spoke at informal gatherings, schools and universities, and even on the TEDx stage in Edinburgh, sharing her experiences to inspire others. She became a voice for female empowerment, especially after she decided to continue walking despite the attack in Mongolia. "Quitting was never an option," she said. 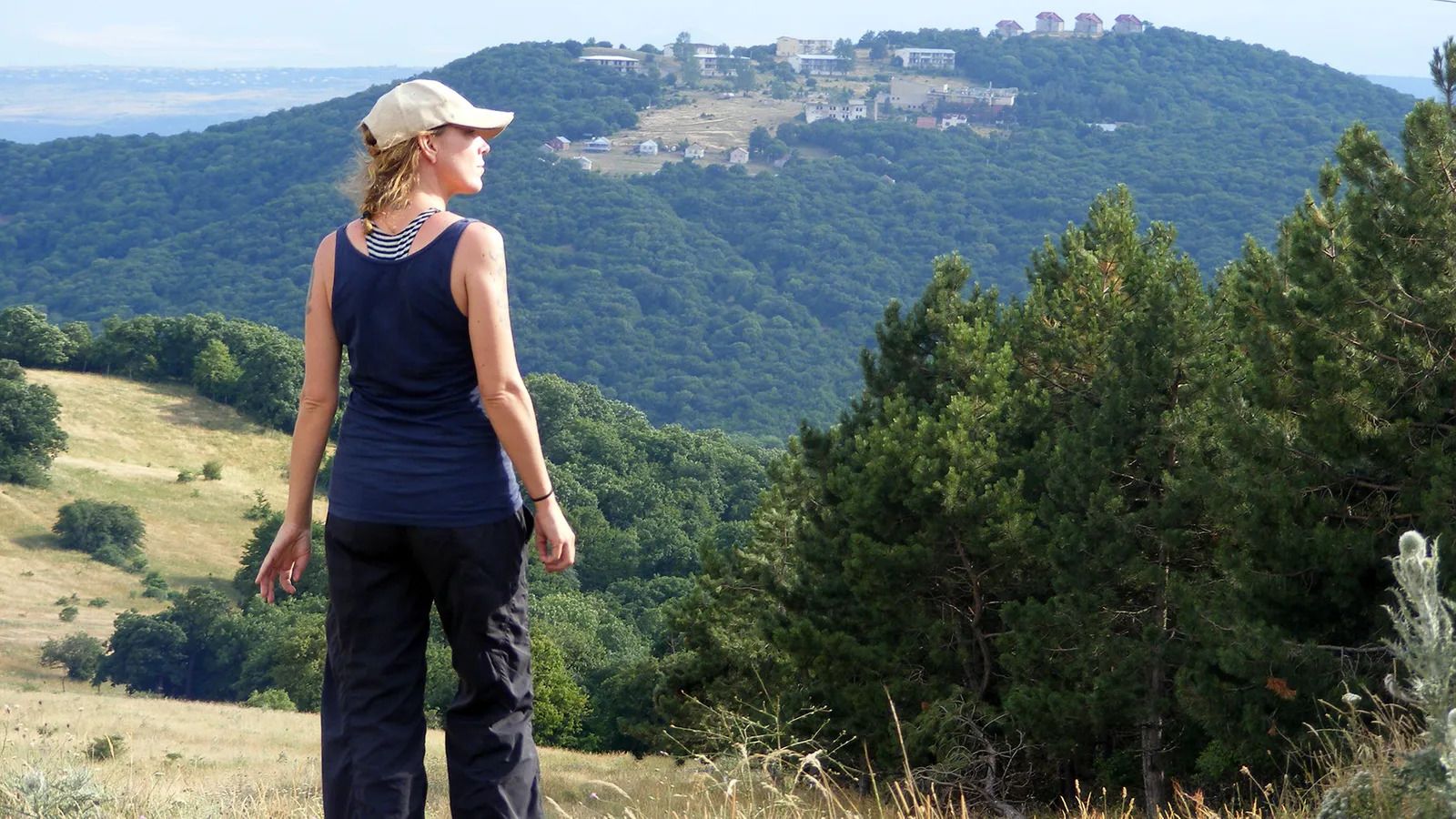 Maxwell walked with a general direction in mind, but always deferred to her gut feeling of where to turn left or right

Throughout her pilgrimage, Maxwell collected donations for NGOs such as World Pulse and Her Future Coalition that focus on supporting girls and young women. In total, she raised about $30,000.

Embracing curiosity and open-mindedness, Maxwell said, is a powerful way to "more deeply experience the world and its inhabitants". For six-and-a-half years, Maxwell chose a lifestyle of curiosity, uncertainty and extreme vulnerability. And she did so in search of something she could never be certain to find: personal happiness and a deeper connection to the world around her.

On 16 December 2020, Maxwell's pilgrimage ended right where it started: at the house of her best friend Elyse back in Bend. Just as she had answered the call to begin her journey, she knew the time was right to end it. She knew, too, that this adventure had become a way of living that she could return to at any time. For now, though, she's working on a book, planning future journeys and creating ways for women to find, express and embody courage in their daily lives.

Whether a walk leads halfway around the world or just down the road, Maxwell has shown the true worth of slowing down, paying more attention and giving more than we receive along the way.