Inspired by the idea of a living organism, Madeiguincho designed a 188-square-foot cabin that collects, stores, and reuses rainwater and produces food and energy.

When Gonçalo Marrote, João Filipe, and Pedro Paredes of Portugal-based architecture and woodworking studio Madeiguincho designed and built this 195-square-foot cabin in Lisbon, they had utopian ideals in mind. "We wanted to reimagine the typical way people live in contemporary society, so we envisioned a new type of dwelling that’s mobile, efficient, clean, and beautiful," Marrote says. 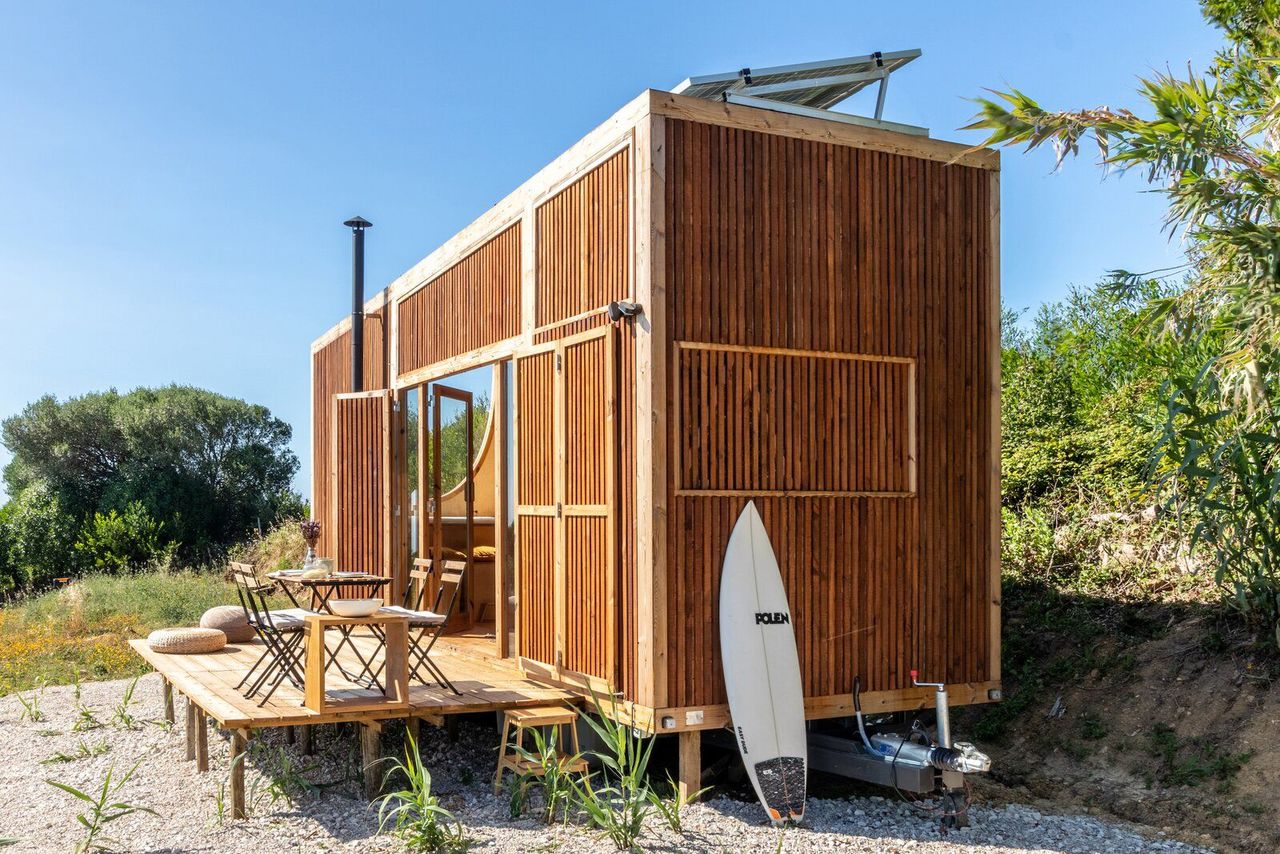 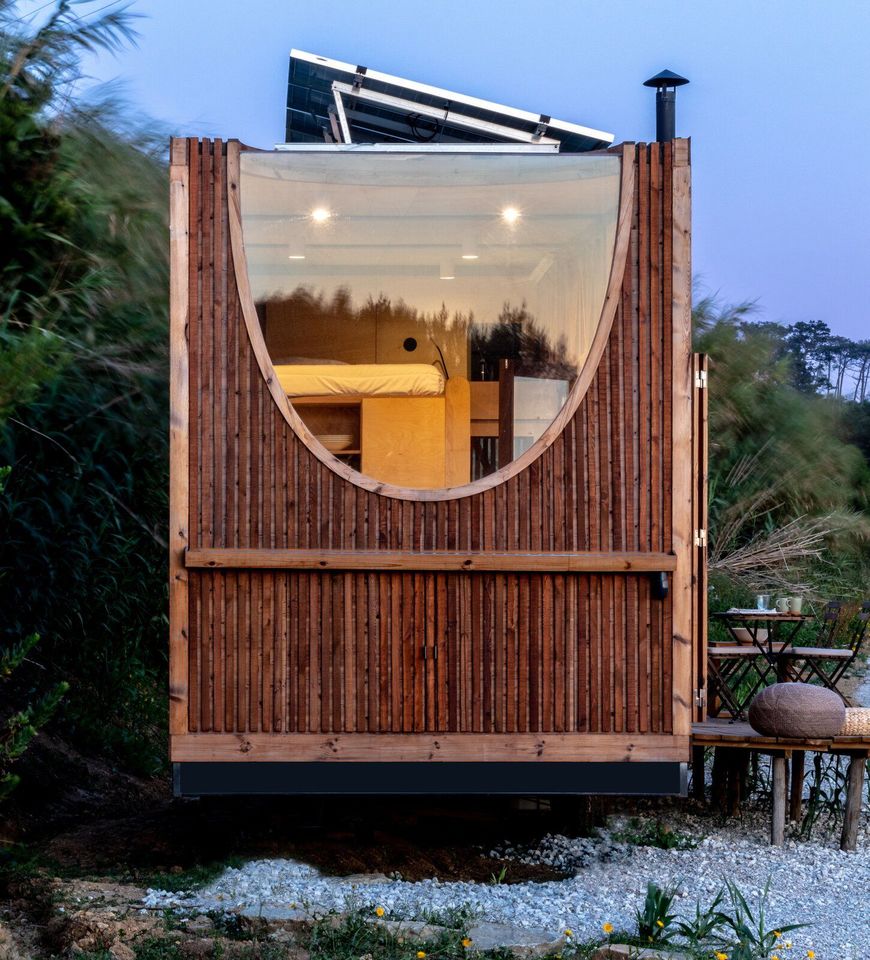 A large, oval window extends from the facade to the ceiling, flooding the cabin with sunlight and providing views of the land and the sky.

Inspired by the concept of a living organism, Marrote and his team designed the Ursa tiny house on wheels to be as sustainable as it is artful. Clad in caramel-colored wood siding with a massive oval window, the off-grid structure collects, stores, and reuses rainwater, produces food and energy, and is powered by photovoltaic panels and wind turbines. 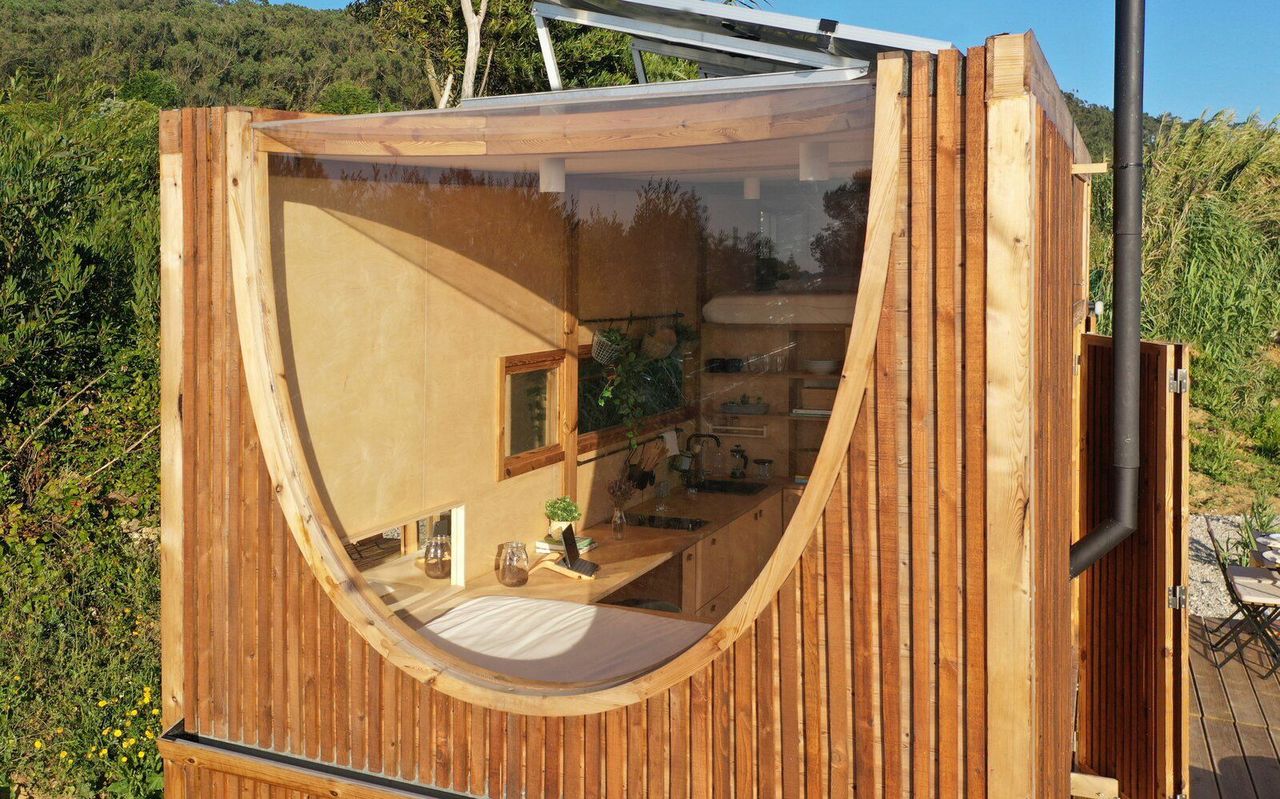 The oval window lends an artful aesthetic to the tiny cabin on wheels.

The cabin channels rainwater from its roof to a particle filter and then two large water tanks that can store a total of 650 liters. A pressurized system pumps water to the kitchen sink, the bathroom sinks, and the shower. A three-stage, reverse-osmosis filter beneath the kitchen sink provides drinking water. "Following use, all water is stored in a tank and later reused for watering plants," Marrote says. 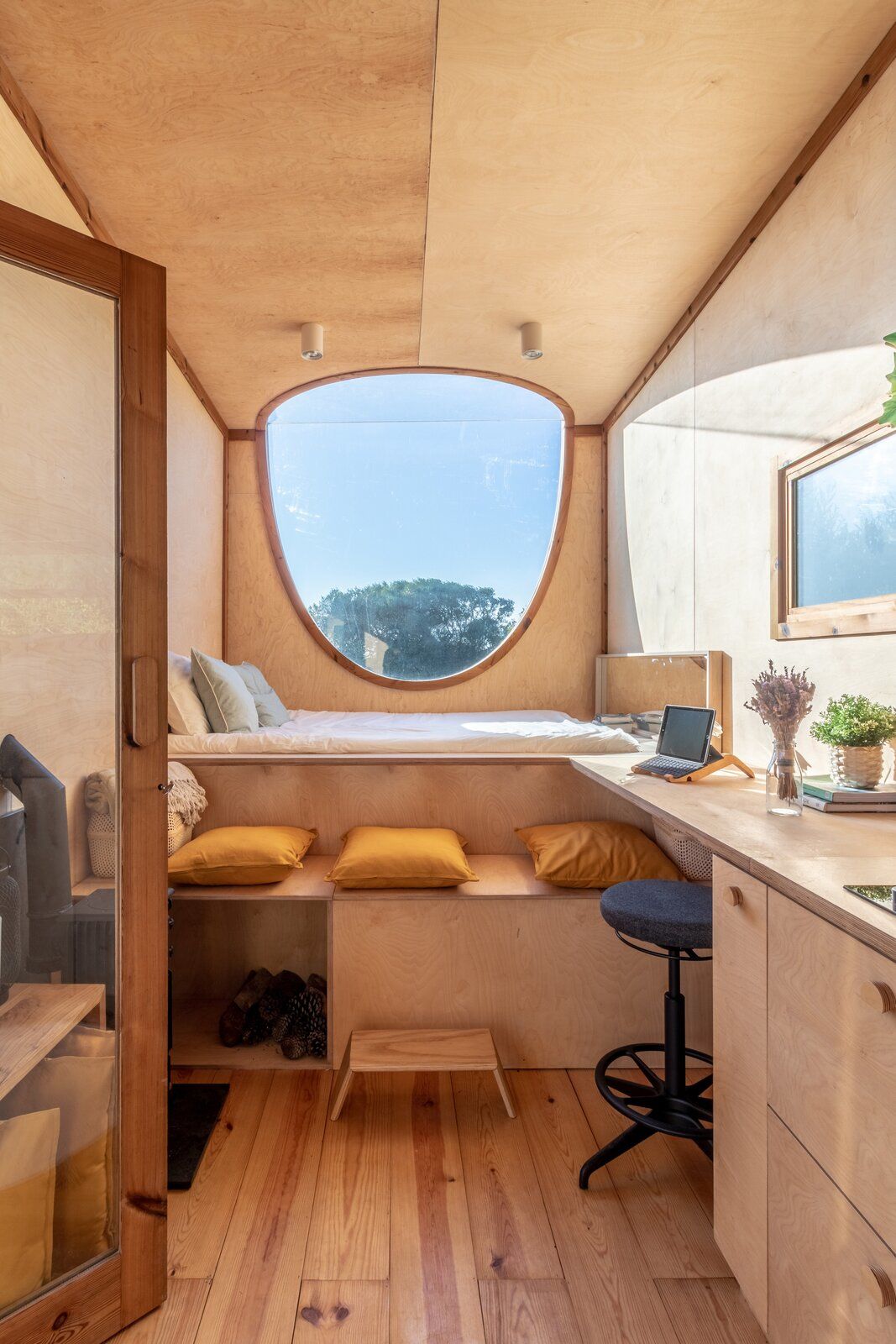 The interior of the cabin is outfitted with an open kitchen and a living space that converts to a sleeping area. Birch plywood wraps the interior, lending warmth and texture.

The tiny cabin can accommodate up to four people, and it features two sleeping areas, a workstation, a kitchen, a full bathroom, and a terrace. The kitchen water pump, refrigerator, and glass-ceramic cooktop are powered by five solar panels installed on the south-facing roof. The photovoltaics can be adjusted to a 30% incline that maximizes energy production throughout the year. "To close the off-grid cycle, we installed an electric dry toilet that produces compost," Marrote says. "It’s a mobile shelter that collects water and produces both energy and food." 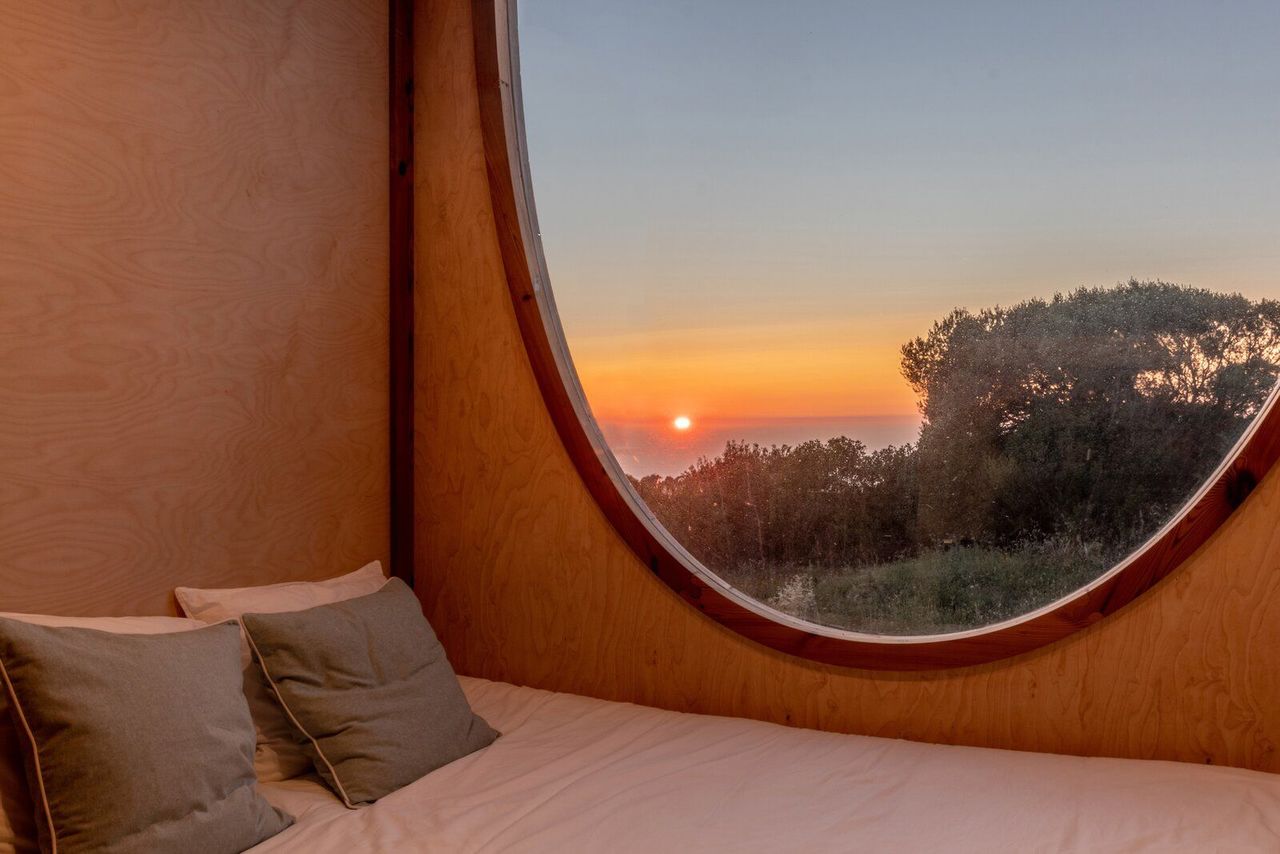 The daybed in the living area converts to a bed that sleeps two at night.

At 188 square feet, Ursa is the largest of Madeiguincho’s tiny cabins, which also include the 107-square foot Guincho and the 134-square-foot Abano. All three cabins are wrapped in Thermowood cladding and feature plywood interiors. "The birch plywood is simple, minimalistic, and no-frills," Marrote says. 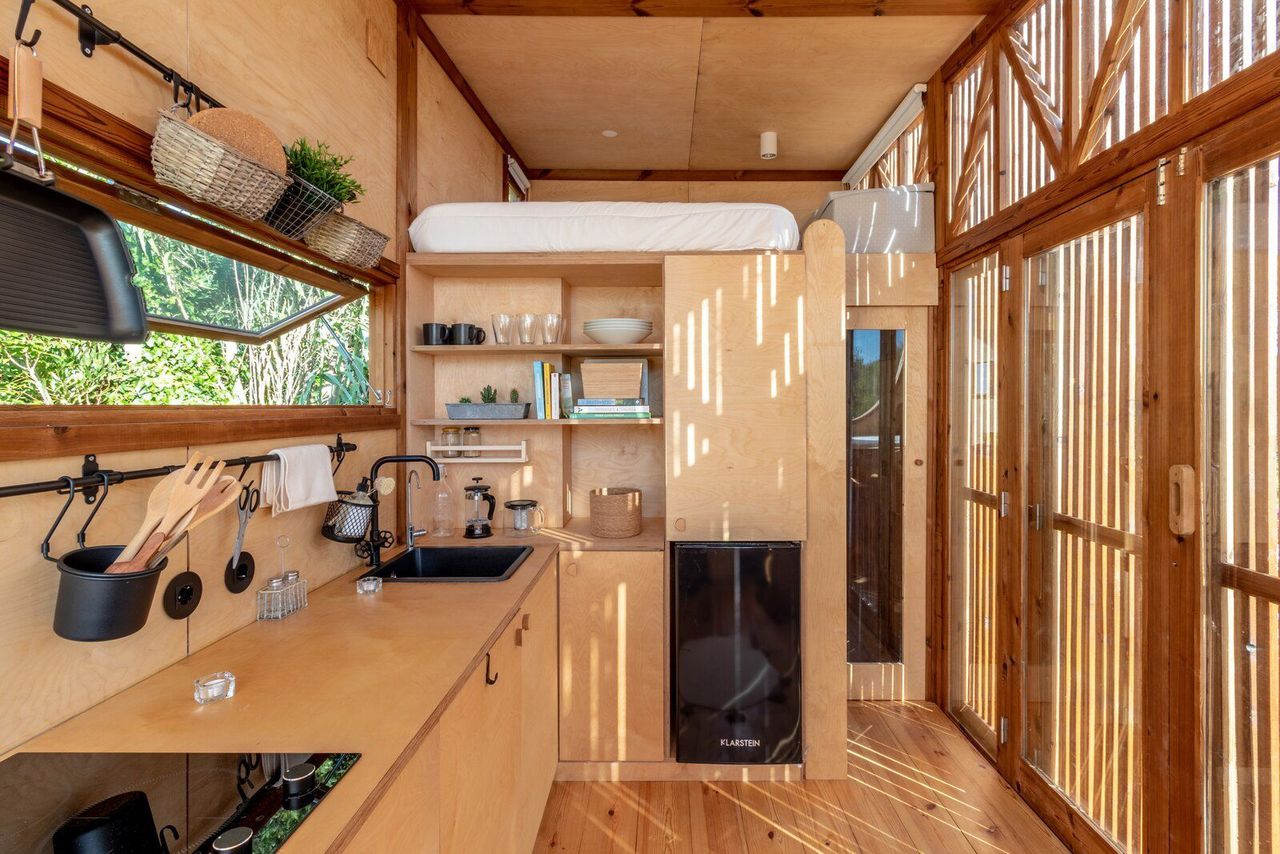 Vertical Thermowood shutters can be opened or closed, offering connection to the landscape or privacy when needed.

The design team was inspired by portholes when they created the massive oval-shape window. "This was the starting point," Marrote says. "Then we decided the window should continue from the facade to the roof, allowing residents to be constantly connected to the ocean, the stars, and the sky." 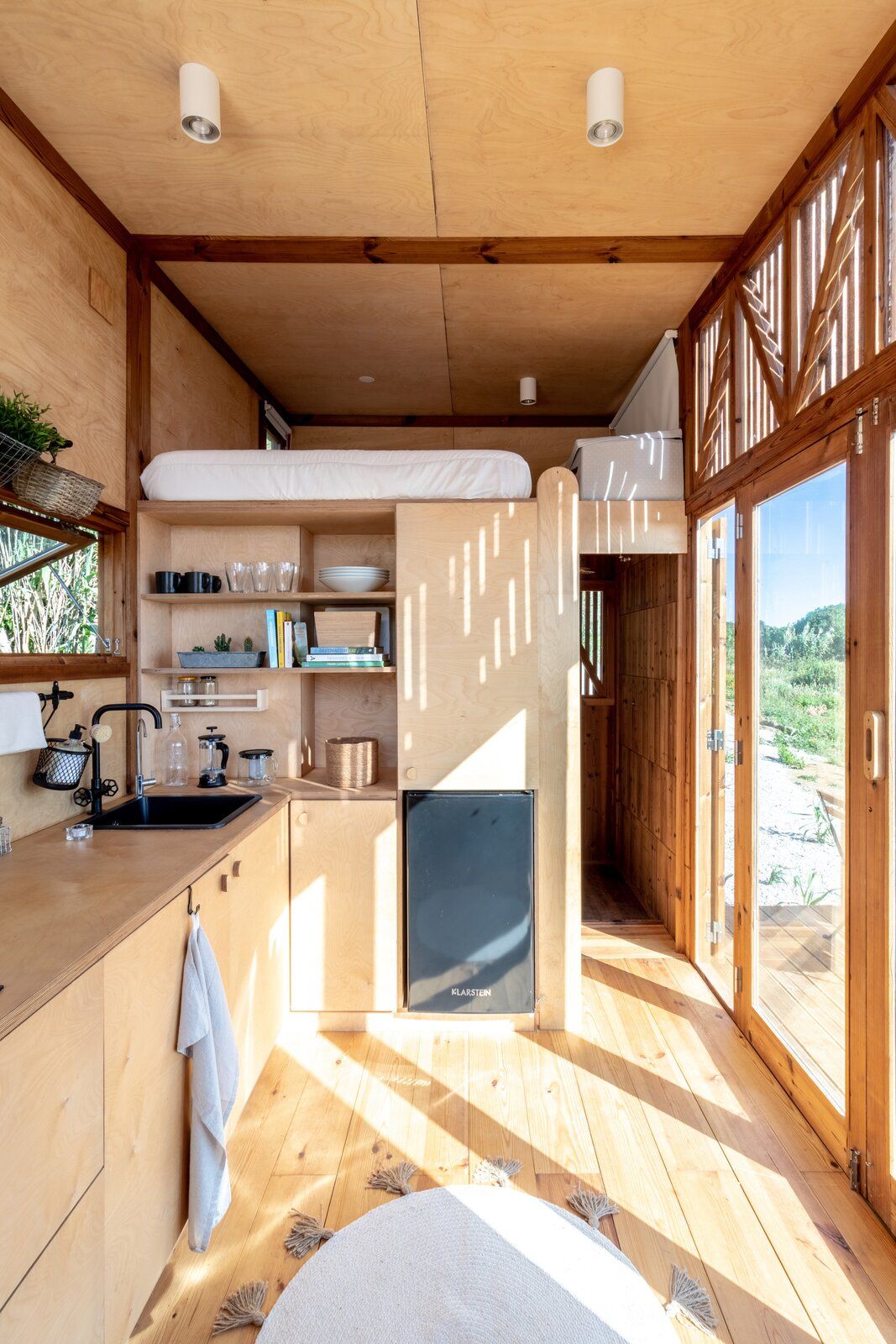 When the shutters are open, the interior of the tiny cabin feels connected to the landscape via the large glass doors in the kitchen area.

The aperture-like window brightens up the interior, but shutters can darken and close off the tiny home when residents desire privacy. "We designed this cabin with the possibility of being completely closed or open, and connected with the natural surroundings through the big oval window," Marrote says. 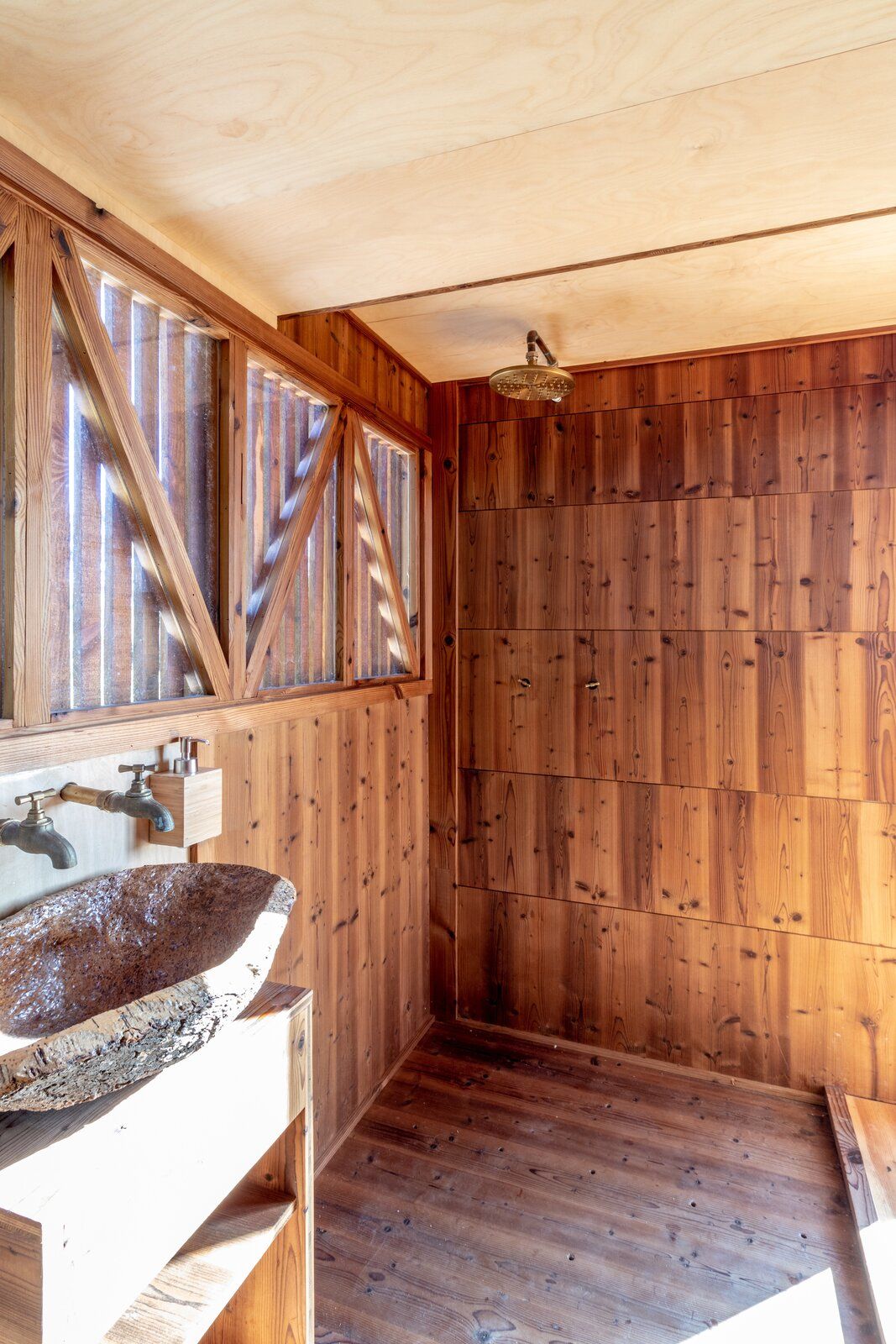 The bathroom is finished with a birch plywood ceiling, and Thermowood makes up the walls and the flooring in the wet areas. Brass fixtures contrast with the wood and add a touch of glam.

According to Marrote, compact residences like Ursa are here to stay. "The tiny home movement is going to last," the architect says. "The idea that we don’t need many things to live a quality life-and that we can do it with a smaller footprint-is changing the paradigm of construction, and making us rethink the way we live. Structures like Ursa help people disconnect from daily life and connect with nature. And in today’s housing market, they make it possible for people to buy a house without a mortgage or a loan that takes a lifetime to pay." 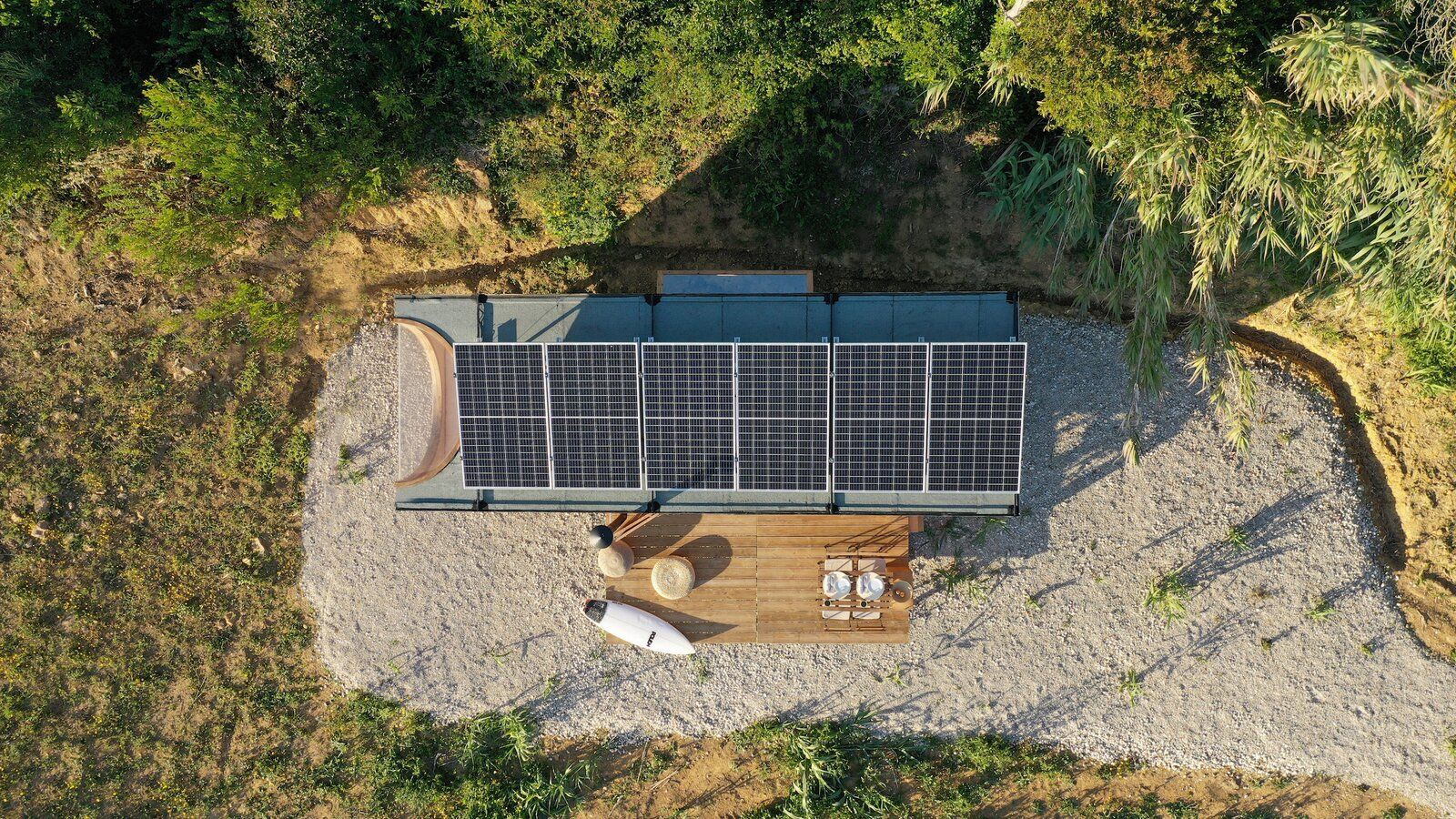 Rooftop solar panels produce energy for the tiny cabin, which features a large wood deck at its front facade. 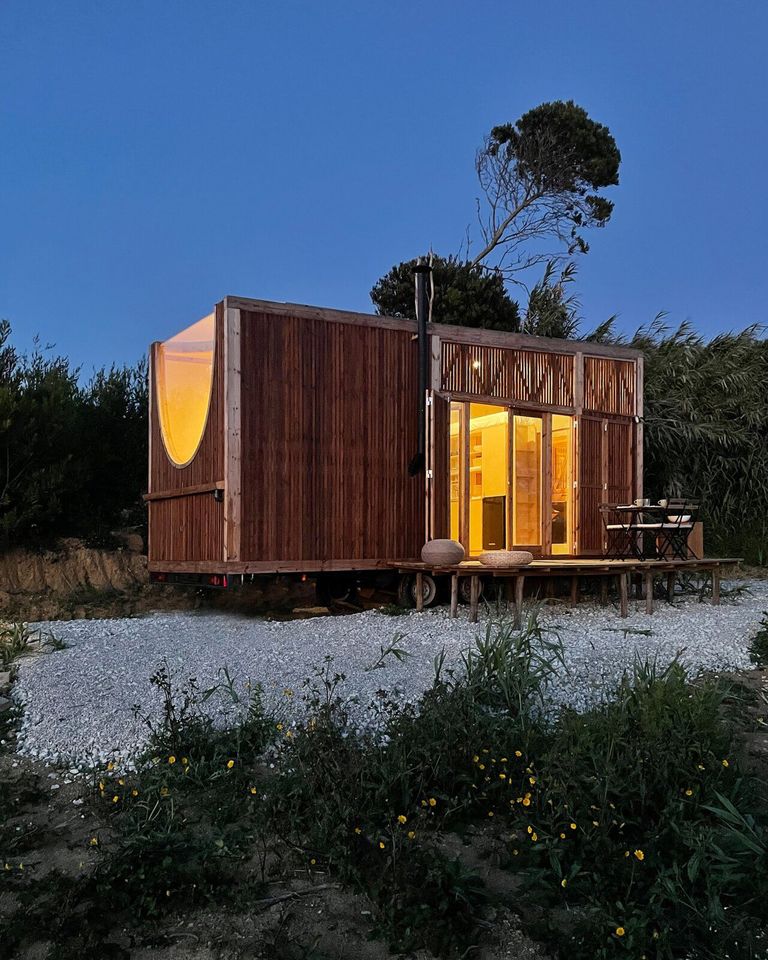 In the evening, warm light shines through the oval window and the large glass doors, creating a lantern-like effect.