But the video of one "contract", signed by an Indian couple at their recent wedding, has hit the headlines and gone viral on social media for its unusual content.

The fun list of do's and don'ts has been put together by friends of the newlyweds and is obviously not legally binding.

But since it was uploaded on Instagram on 22 June, a day after the wedding, the 16-second video of the bride and the groom signing the piece of paper has been viewed 45 million times.

There have been other instances in the past where a bride or a groom or their friends have drawn up such contracts, but the attention the latest video has been getting is mostly for the top item on the list - "only one pizza a month".

The advice is aimed at the 24-year-old bride Shanti Prasad - described by friends as "a pizza freak" - who married her college sweetheart Mintu Rai, 25, at a traditional ceremony in Guwahati, in the north-eastern state of Assam.

The couple met five years back when they joined the same commerce class and soon found themselves in a WhatsApp group. One day, when she missed college and asked for some help, Mintu readily obliged.

They started talking and became friends. Over time, romance blossomed and in February 2018, the couple went out on their first date.

"We bunked the last class of our day and went to a nearby pizza outlet. I knew I had to take her for pizza because she always talked about pizzas," says Mintu, who owns an electrical goods store in the city. 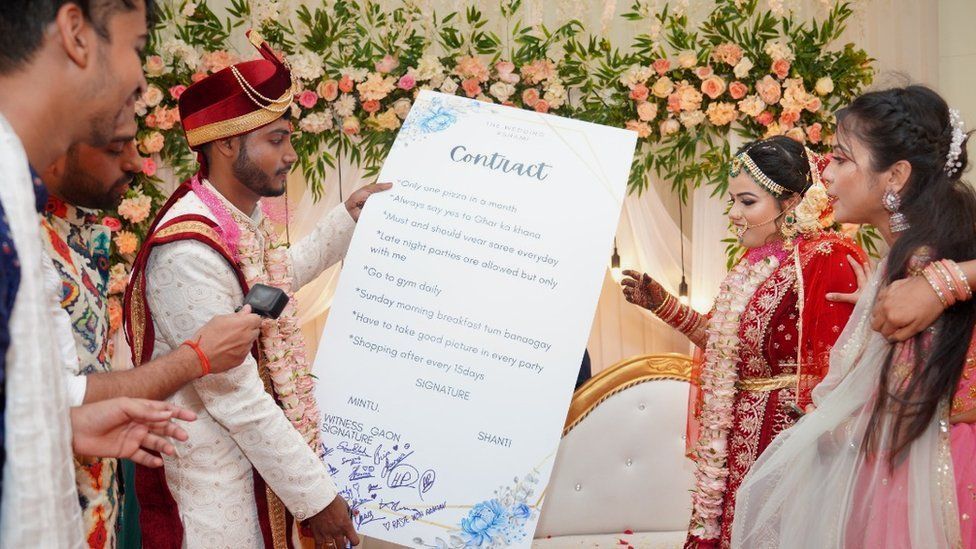 Adds Shanti, "I am very fond of pizzas. On dates, I would always say let's go and eat a pizza."

But after a while, Mintu who "also likes pizzas but can't eat them every day" started to complain.

"He would ask how much pizza will you eat? Let's get something else," says Shanti.

The couple say they have never fought over food - "at least not so far" says Mintu - but Shanti says "he would always complain to friends, he would say that how irritated he was that every time he had to eat a pizza and this had become a matter of jokes among all our friends".

"Her love for pizza is second only to her love for Mintu. I think she thinks about pizza in her free time and even in sleep," says Raghav Thakur, the couple's friend and classmate and also the brain behind the surprise wedding contract.

"Since we met in college in 2017, we've spent so much time together and become very close. We have seen their romance bloom and we wanted to do something unique, something memorable for them when they got married," he told the BBC.

"So, we brainstormed in our group and came up with eight points that we thought would work for them. Since she's a pizza freak, we put it right at the top," he explained. 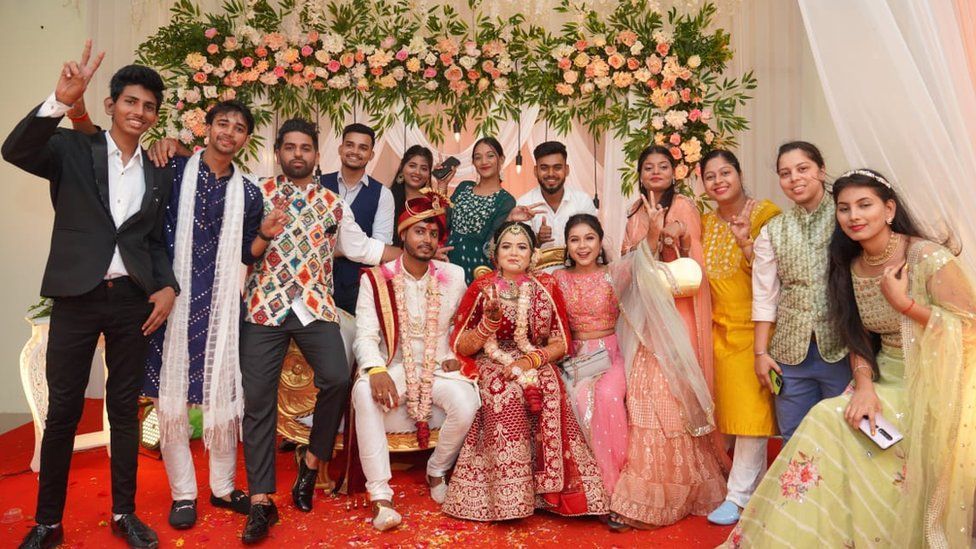 The contract, which took shape in the week before the marriage, included several other conditions - Mintu must cook breakfast on Sundays, he must take her shopping every 15 days and can go to late-night parties only accompanied by his wife. Besides limiting her pizza intake, Shanti had to agree to go to the gym daily and wear a sari every day - "because Mintu says she looks very beautiful in a sari", says Raghav.

"We had no idea that our friends were planning this for us. But then our classmates really know us well," says Shanti.

But what started off as a joke among friends quickly took social media by storm. Once the photography company uploaded the video on Instagram, it went viral, gathering millions of views and likes.

"We were busy with our wedding celebrations so we realised only three-four days later that the video had gone viral," Shanti said, adding that they were overwhelmed by the response.

"We never thought that it would travel so far. It was a surprise, a really lovely one. But I feel happy when people ask me about the video," added Mintu.

The couple are getting the contract framed so they can put it up on their wall. But Raghav says he has little hope that Shanti will abide by its conditions.

"She takes it as a joke. She keeps complaining that she's put on 3-4kg in the past few years, but I don't think that she's really serious about cutting down on her pizza consumption," he says, laughing.

He's right, says Shanti, and adds, "we've already had pizzas twice since the wedding and it's only been two weeks".