From diamanté-framed gazes to Old Hollywood waves, the Met Gala’s glittering guests turned out a host of standout beauty moments riffing on the theme of American fashion.

From edgy, of-the-moment statements to modern interpretations of iconic American glamour, here are the beauty trends that emerged from the night. 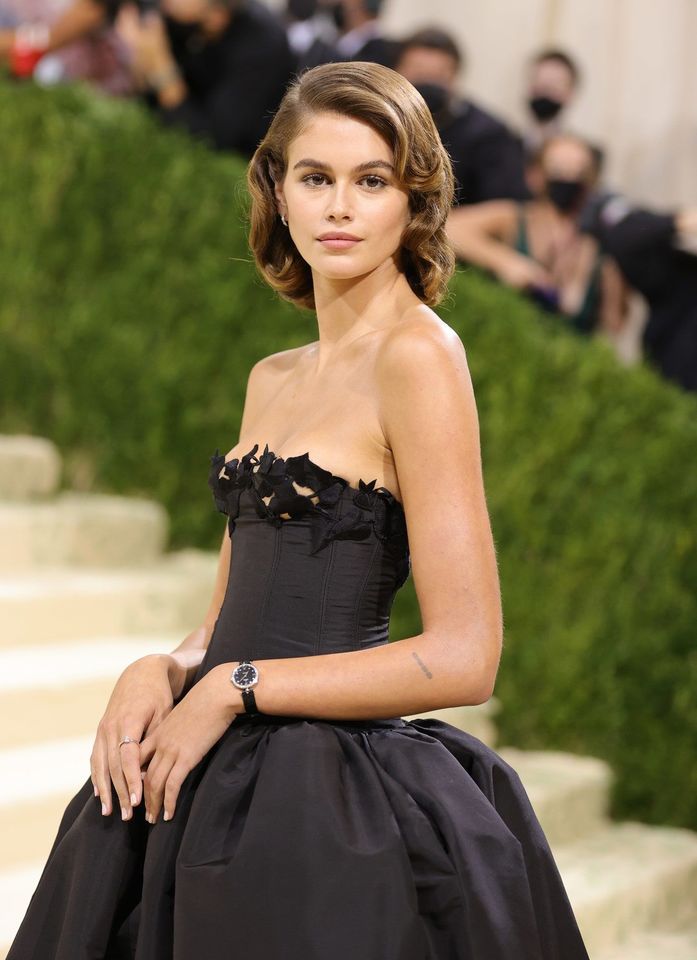 “I just feel like the hot girl culture needs to give Hollywood glamour,” said Megan Thee Stallion of her old-school finger waves, a look that was also embraced by Paloma Elsesser, who sported strong, glossy waves around her face. Others had specific references in mind with Billie Eilish recreating Marilyn Monroe’s voluminous, blown-out platinum bob and Yara Shahidi winking at Josephine Baker as she wore the famed performer’s signature kiss curl. 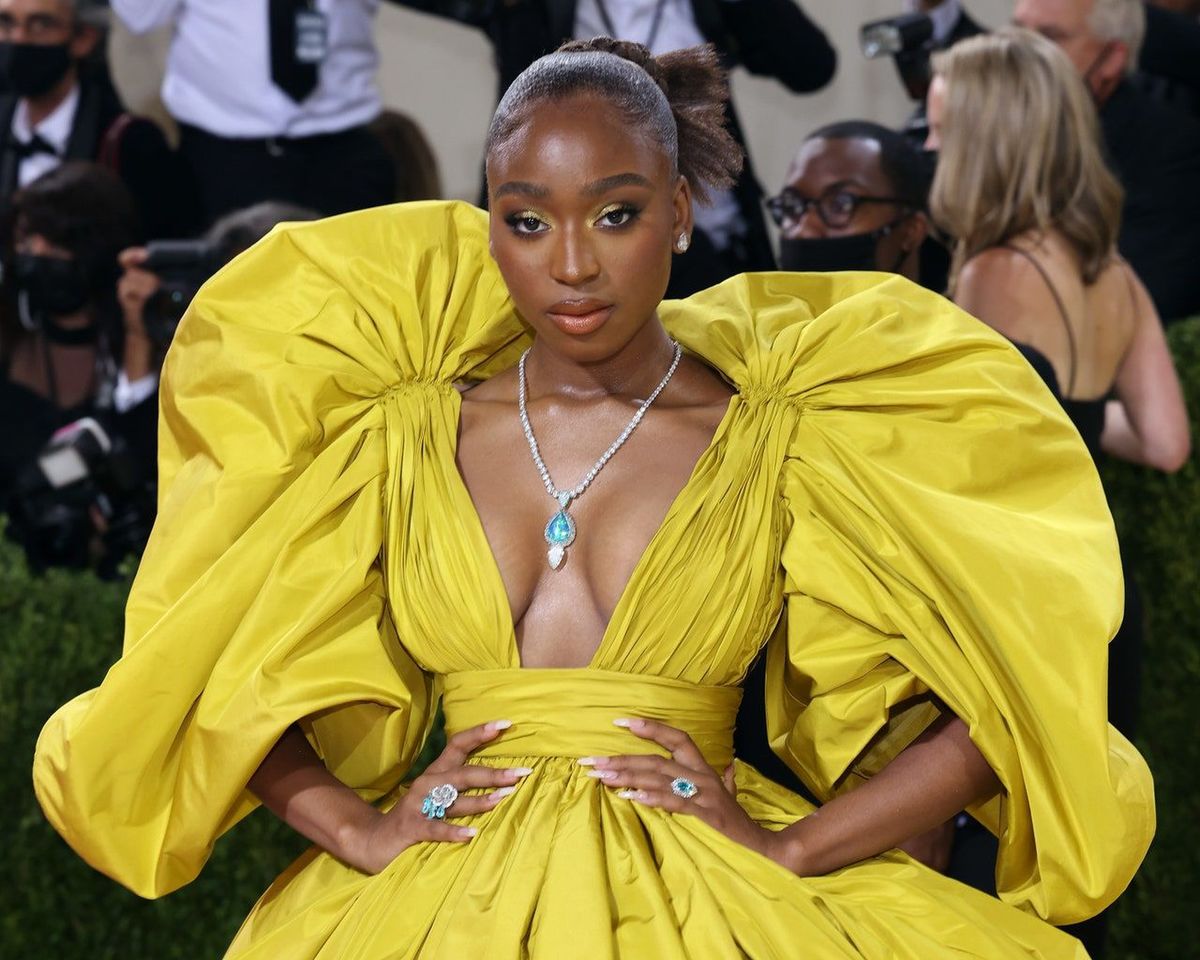 Sculpted hair came in all shapes and sizes.There were mesmerizing, intricate braided shapes, like Zoë Kravitz’s bouffant, Tessa Thompson’s cowboy hat, and Gemma Chan’s delicate duo of looped hoops. Then there were the MoMa-worthy, gravity-defying silhouettes from Naomi Osaka, Maisie Williams, and CL. 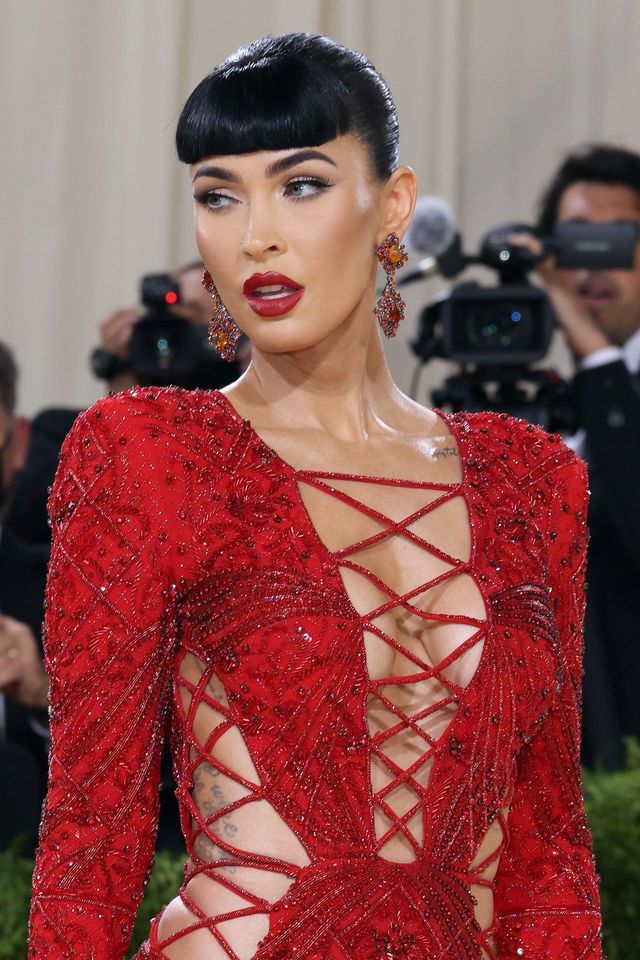 It doesn’t get more classic-or glamorous-than a striking deep red. And while a crimson lip is a foolproof strategy as demonstrated by Megan Fox in her fully realized nod to Bettie Page, it was also thrilling to see the color take other forms. Gigi Hadid showed off deep crimson waves pulled into a ponytail, while others displayed an array of eye statements, like Osaka’s draped gaze and Cara Delevigne’s scorched-earth smoky eyes. 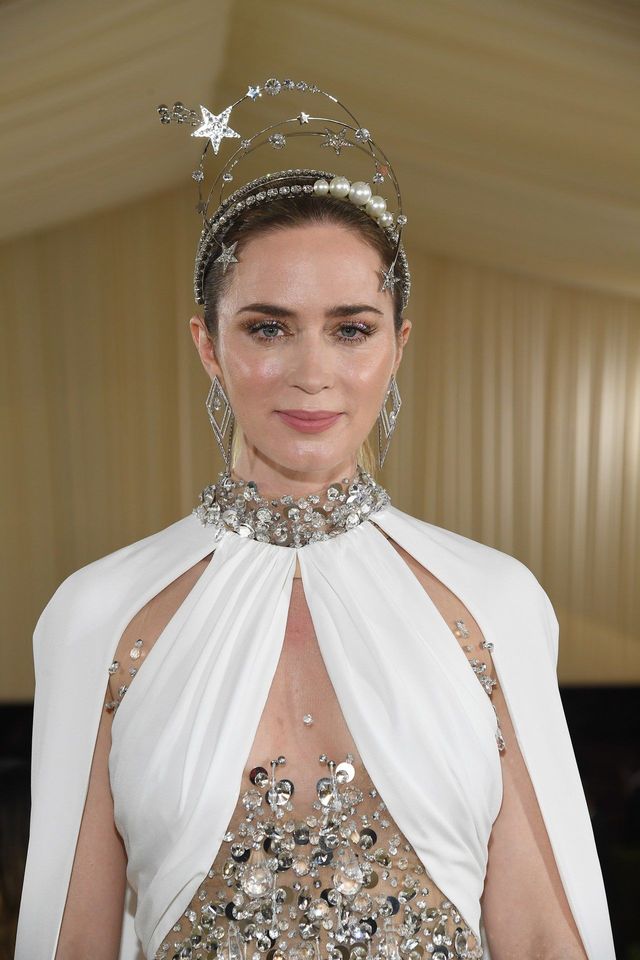 Headpieces were seen in many iterations, each one more intricate than the next. Lorde topped off her Bode look made from “repurposed antiques” with a beaded crown featuring a trio of sunbursts, while Emily Blunt paid tribute to Hedy Lamarr’s star crown with a celestial headpiece of her own. Finally, leave it to Iman to serve up the ultimate mic drop with her larger-than-life gold feathered headpiece. 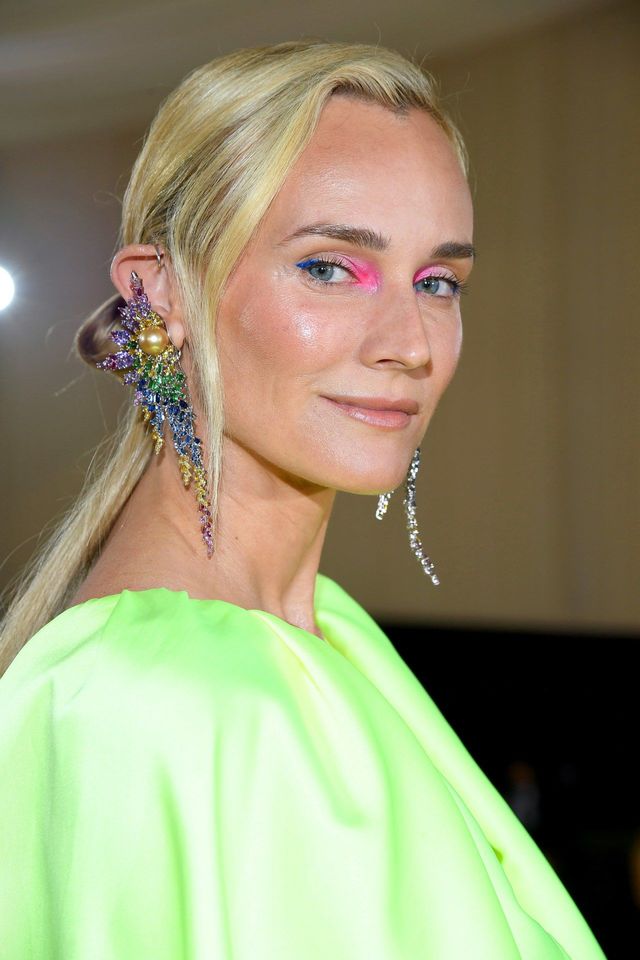 Among the red carpet’s biggest rebels were those who embraced retina-burning doses of color. Diane Kruger donned graphic touches of bright fuchsia and cobalt on the eyes, and both Whitney Peak and Emma Chamberlain wore strokes of equally bright green. Further proving that the tennis ball-inspired shade was truly the standout hue of the evening, both Kid Cudi and Frank Ocean wore buzz cuts in the can’t-miss color. 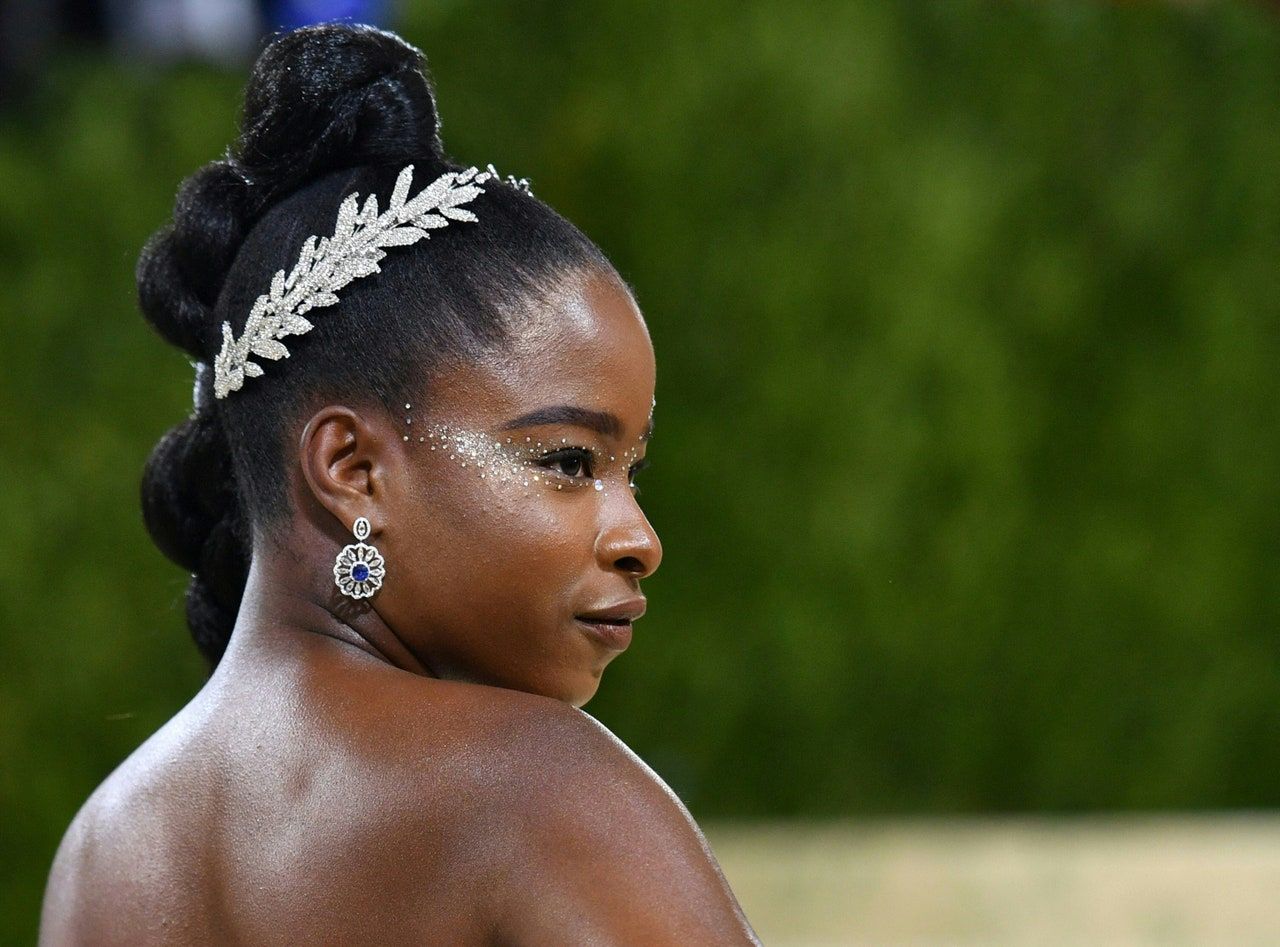 An accent of sparkling diamanté never hurts. Just look to the gazes of Amanda Gorman, Julia Garner, and Ella Emhoff for proof. And it’s not just the eyes that have it, but stylized manes as well. Both Alicia Keys and Saweetie embellished their sleek ‘dos with constellations of sparkling crystals. 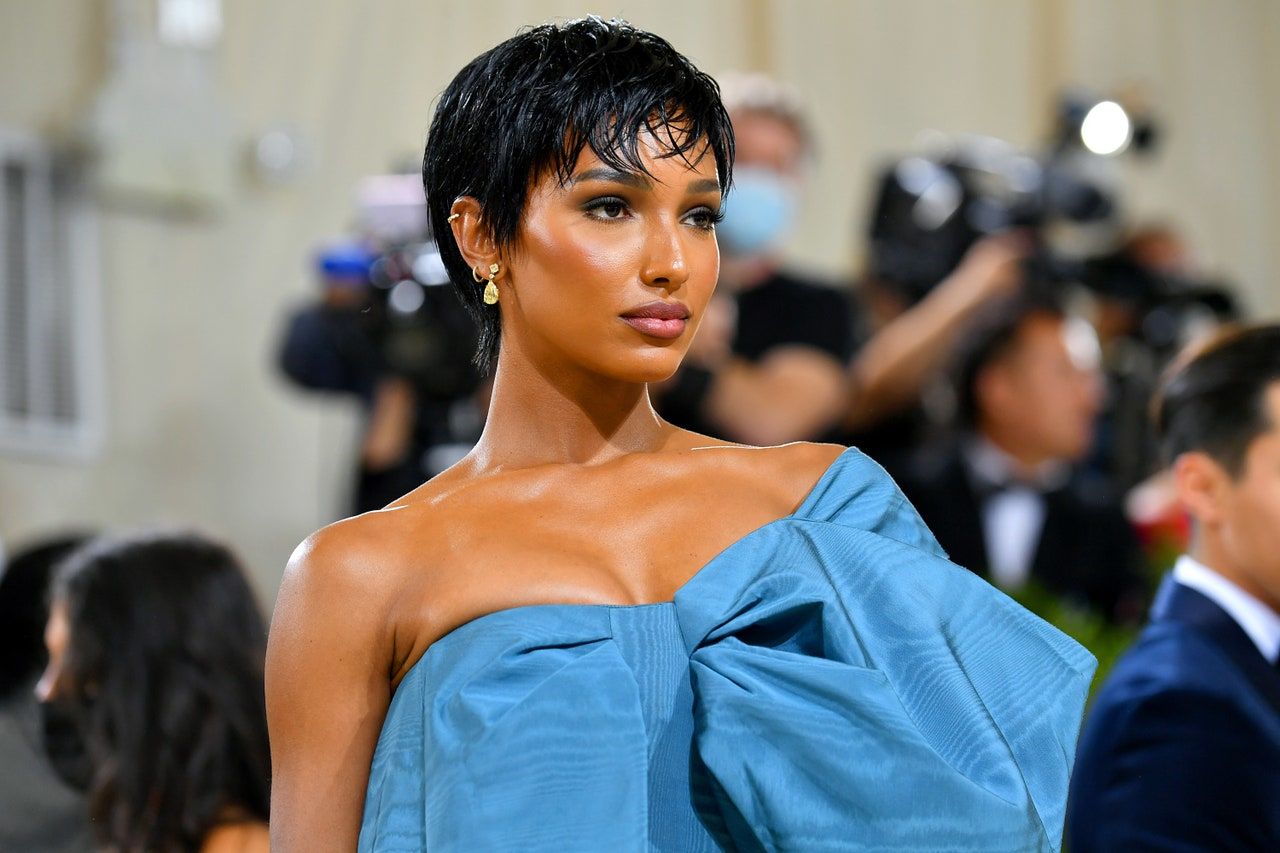 There’s nothing like a big chop to signal a new chapter. And many major stars were ready for change ahead of last night’s red carpet. Joan Smalls, Irina Shayk, Rebecca Hall, and Jasmine Tookes all revealed fresh pixie cuts, while Storm Reid showcased both a new crop and a platinum blonde dye job.