Whether it be show-stopping looks at major events or memorable night-out outfits, celebrities have always been apt to experiment with Haute Couture styles. Though the elaborate creations of leading couture houses may seem over-the-top to some, they are surely the perfect choice for celebrities looking to develop a distinct aesthetic.

And with Lady Gaga making waves across social media with high-fashion looks, celebrity couture dressing is back in the forefront. The singerขwho has never shied away from a daring fashion choiceขrecently wore a purple mini-dress from Valentino's Fall/Winter 2021 Haute Couture collection. Paired with futuristic Marc Jacobs sunglasses, the cape dress is immaculately crafted and made complete with fringe. Just a few months prior, Gaga wore a Schiaparelli Haute Couture gown to the Inauguration of President Joe Biden. 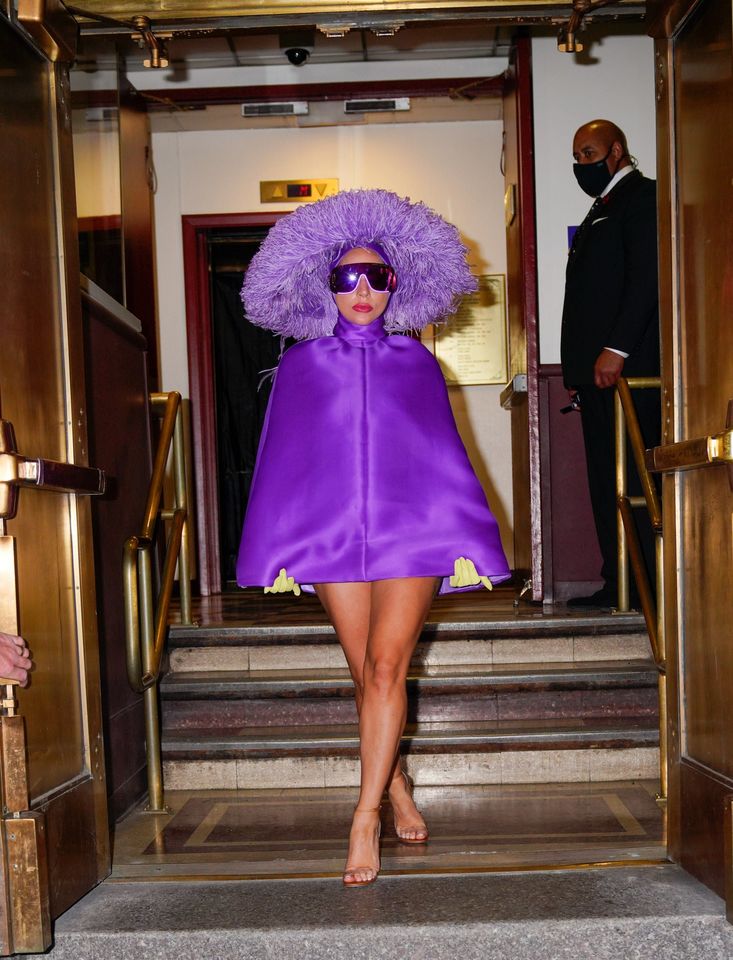 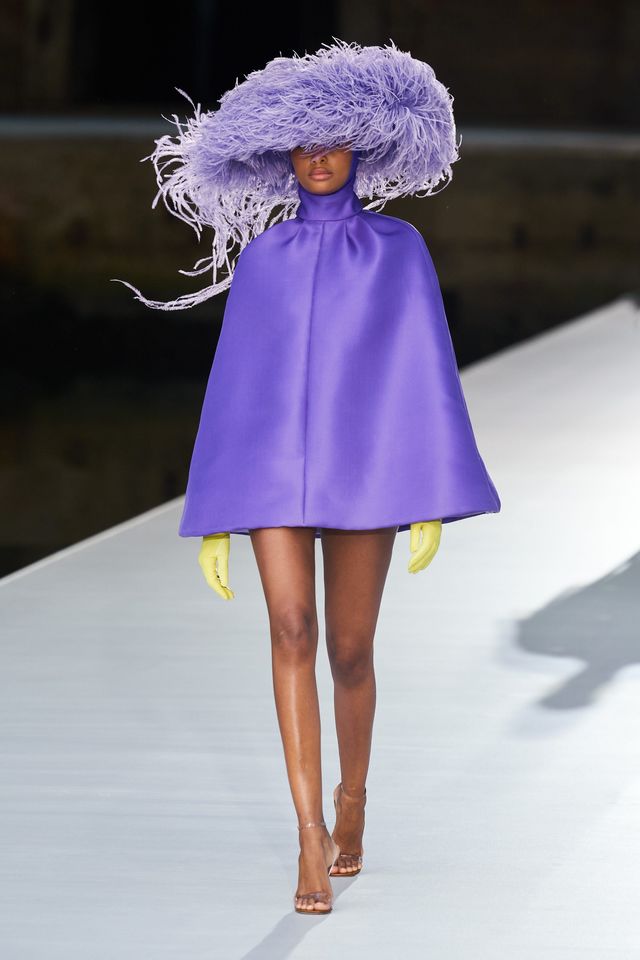 With high-profile celebrities opting for couture pieces, the historic craft is more relevant than ever. Though the price tag of these stunning creations are unattainable to most, they provide an unrivaled sense of fantasy and escapism. From Beyoncé in Givenchy to Kim Kardashian in vintage Thierry Mugler, couture makes the perfect vessel for celebrities to display their style. Here, see the most memorable times celebrities wore Haute Couture. 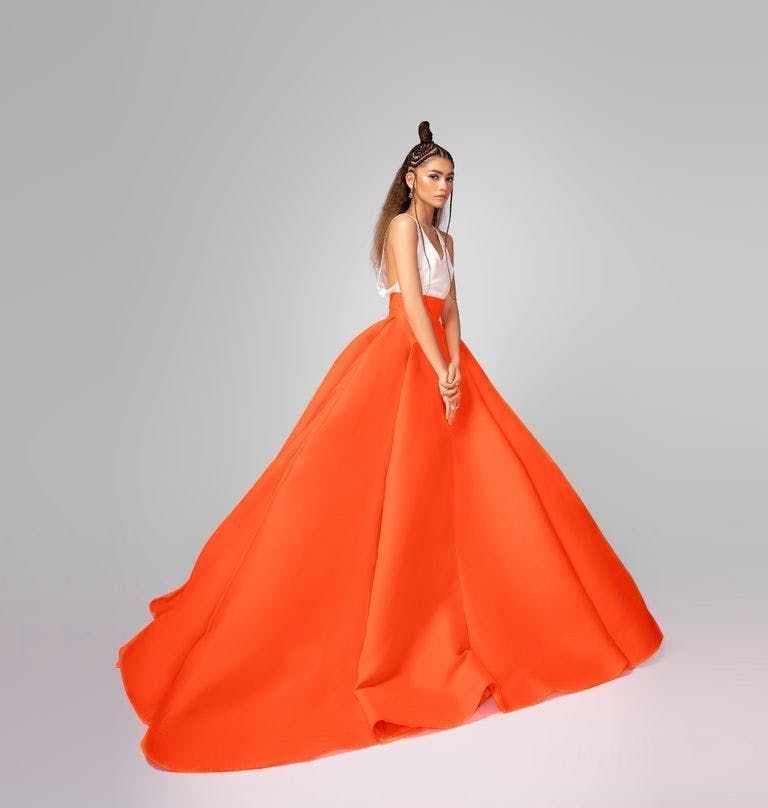 Zendaya in Valentino Haute Couture at the 2021 Critics' Choice Awards. 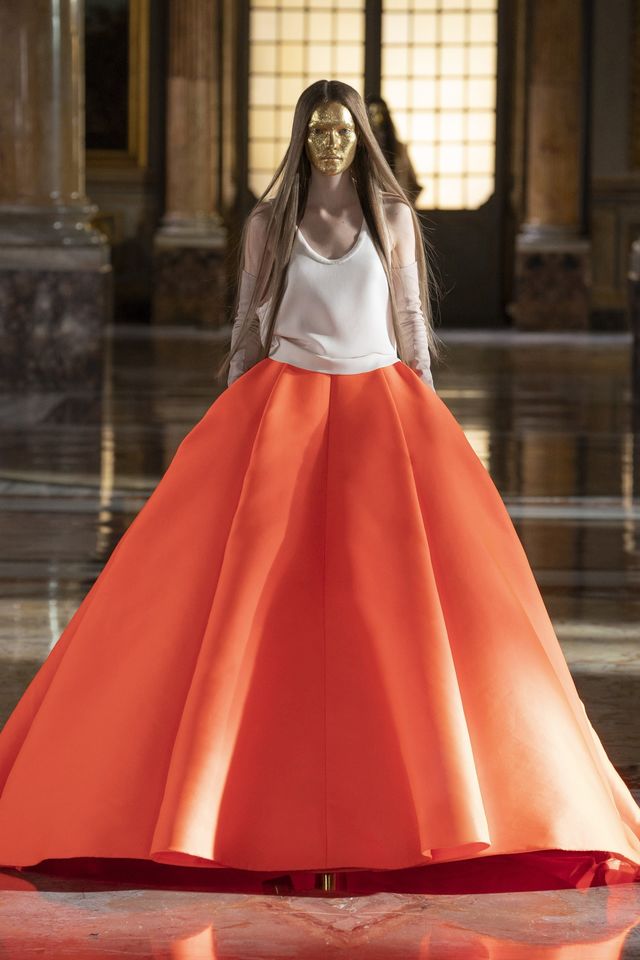 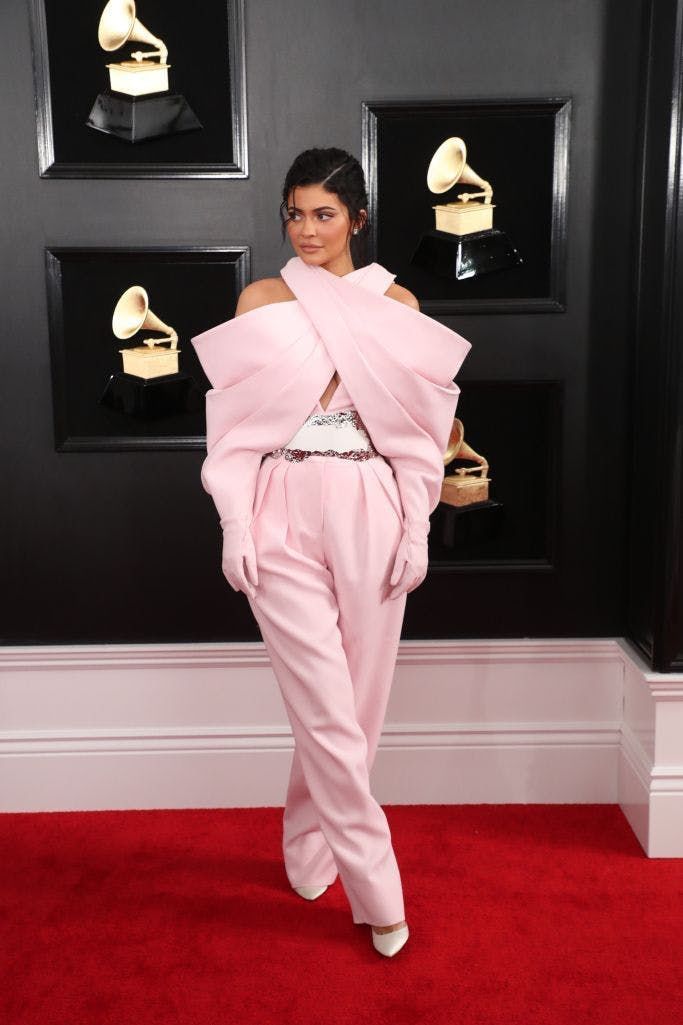 Kylie Jenner at the 2019 Grammy Awards. 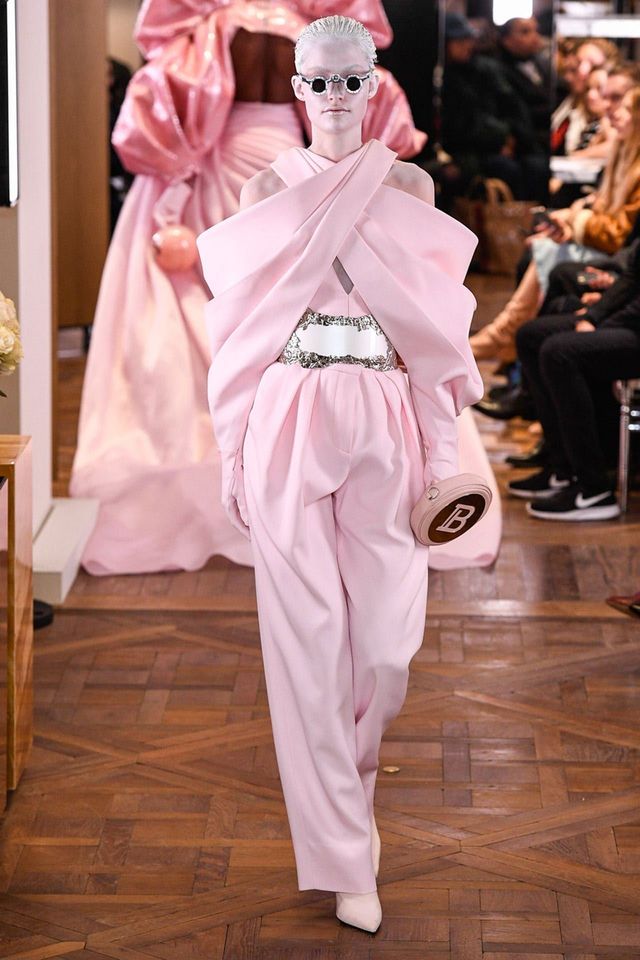 Forever a favorite of the Kardashian-Jenner family, Balmain couture was the stylish option for Kylie Jenner at the 2019 Grammy Awards. The star sported the all-pink ensemble which included an intricately crafted top that cascaded into opera gloves. 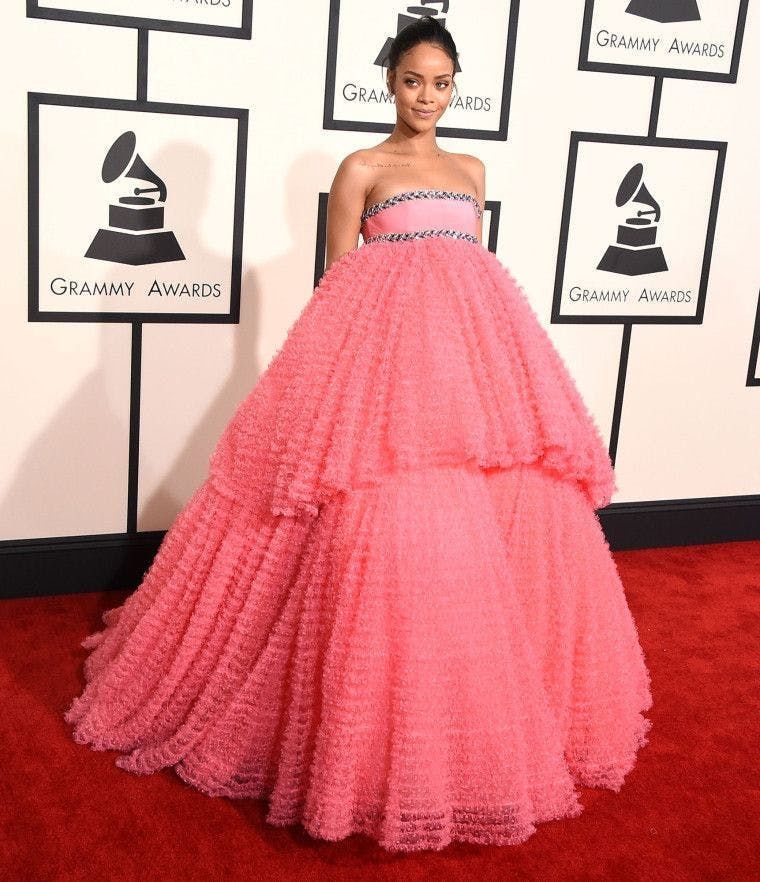 Rihanna at the 2015 Grammy Awards. 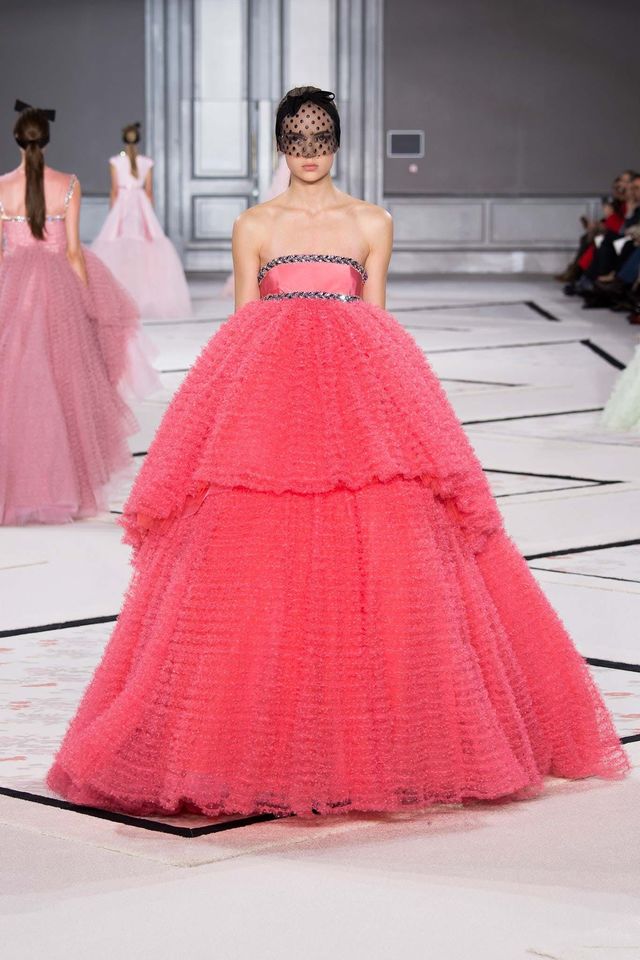 Music and business mogul Rihanna sported a a stunning tiered Giambattista Valli gown at the 2015 Grammy Awards. The dress, from the brand's Spring/Summer 2015 Haute Couture collection, is crafted in a pastel pink hue and features intricate embroidery. 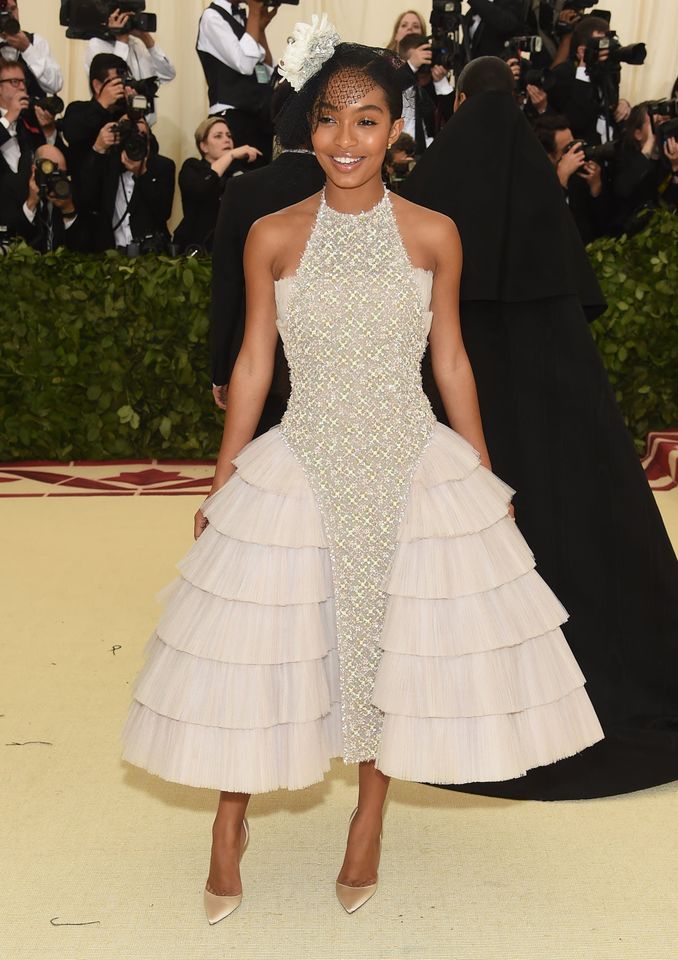 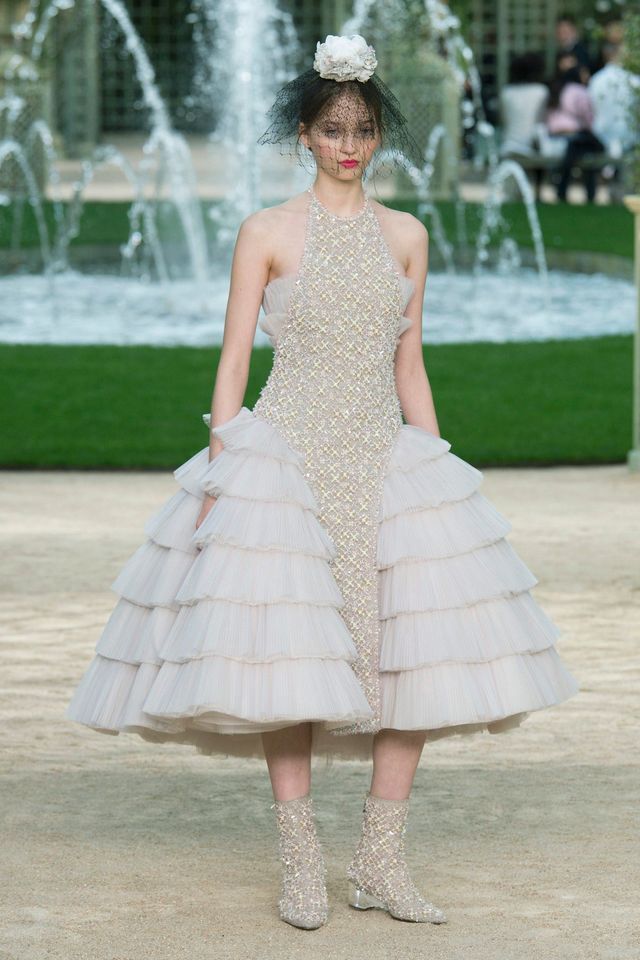 Yara Shahidi made a major style statement at her first ever Met Gala appearance in 2018. The model, actress, and activist sported a Chanel Haute Couture gown for the gala that featured an embroidered front panel and tiered sides. 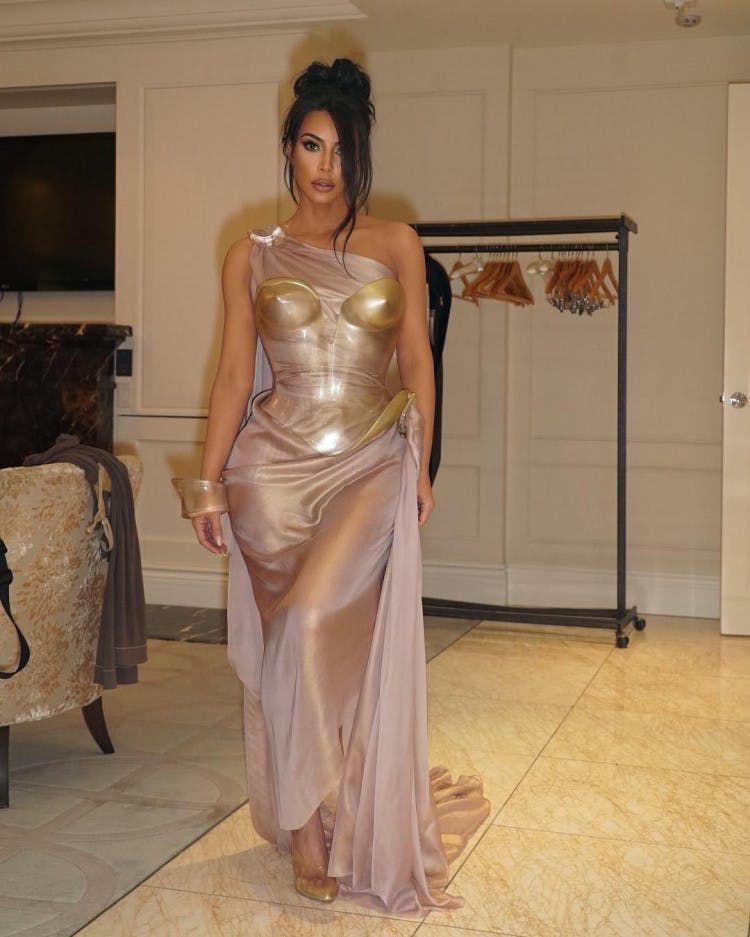 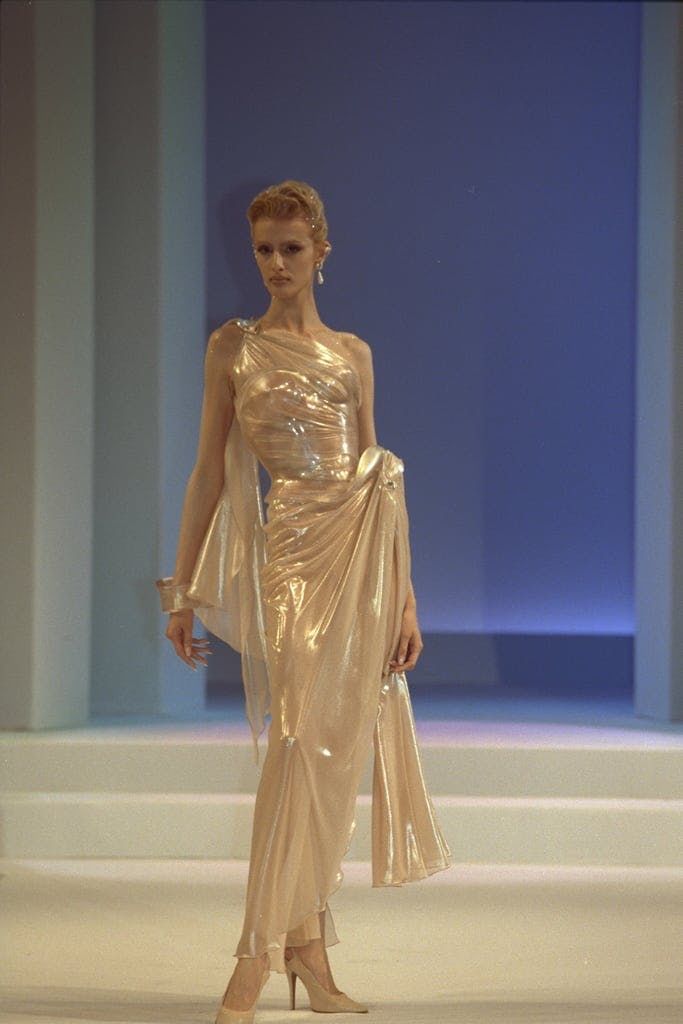 While attending an exhibition at the Montréal Museum of Fine Arts that honored Thierry Mugler, Kim Kardashian sported a memorable look from the designer's couture repetoire. The brand has been a favorite for Kardashian who regularly pulls from its extensive couture archives for high-profile events and appearances. 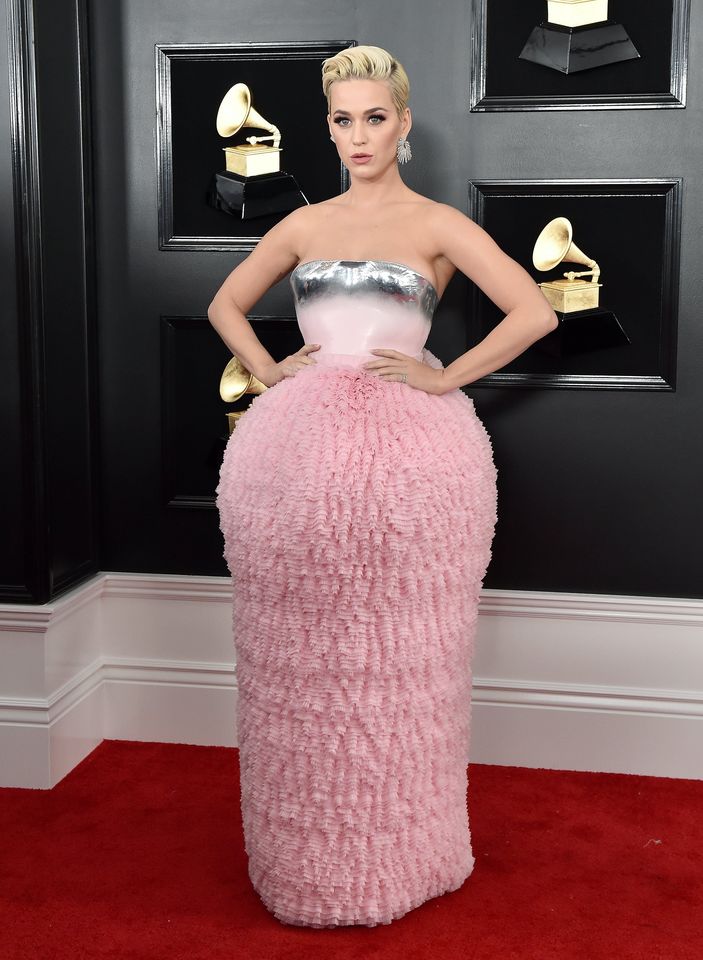 Katy Perry at the 2019 Grammy Awards. 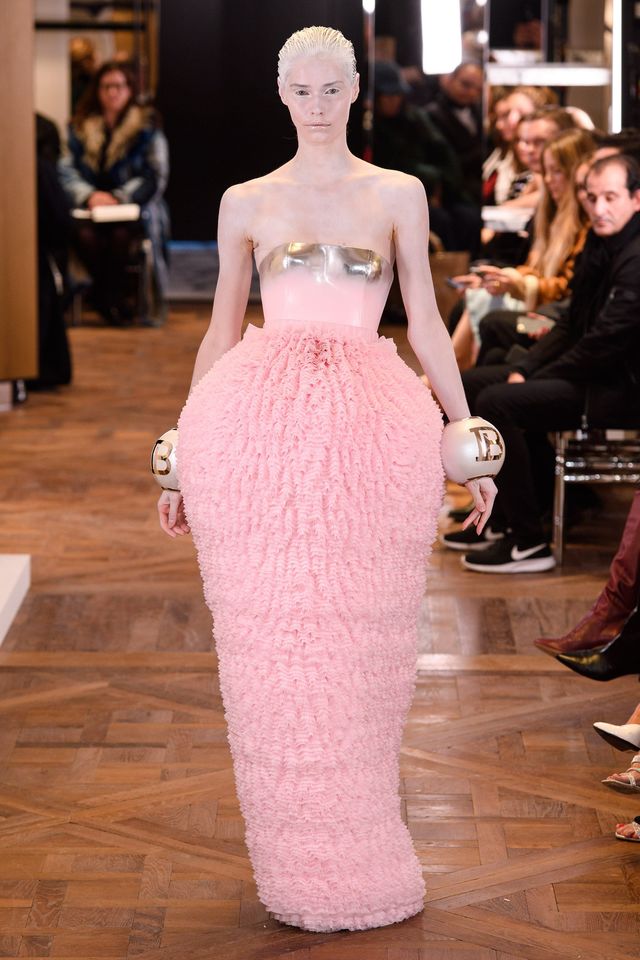 Like Kylie Jenner, Katy Perry also sported Balmain Spring/Summer 2019 Haute Couture at the Grammy Awards. With a structured bodice and intricate colorway, the star's billowing pink gown was a certain standout from one of the biggest red carpets. 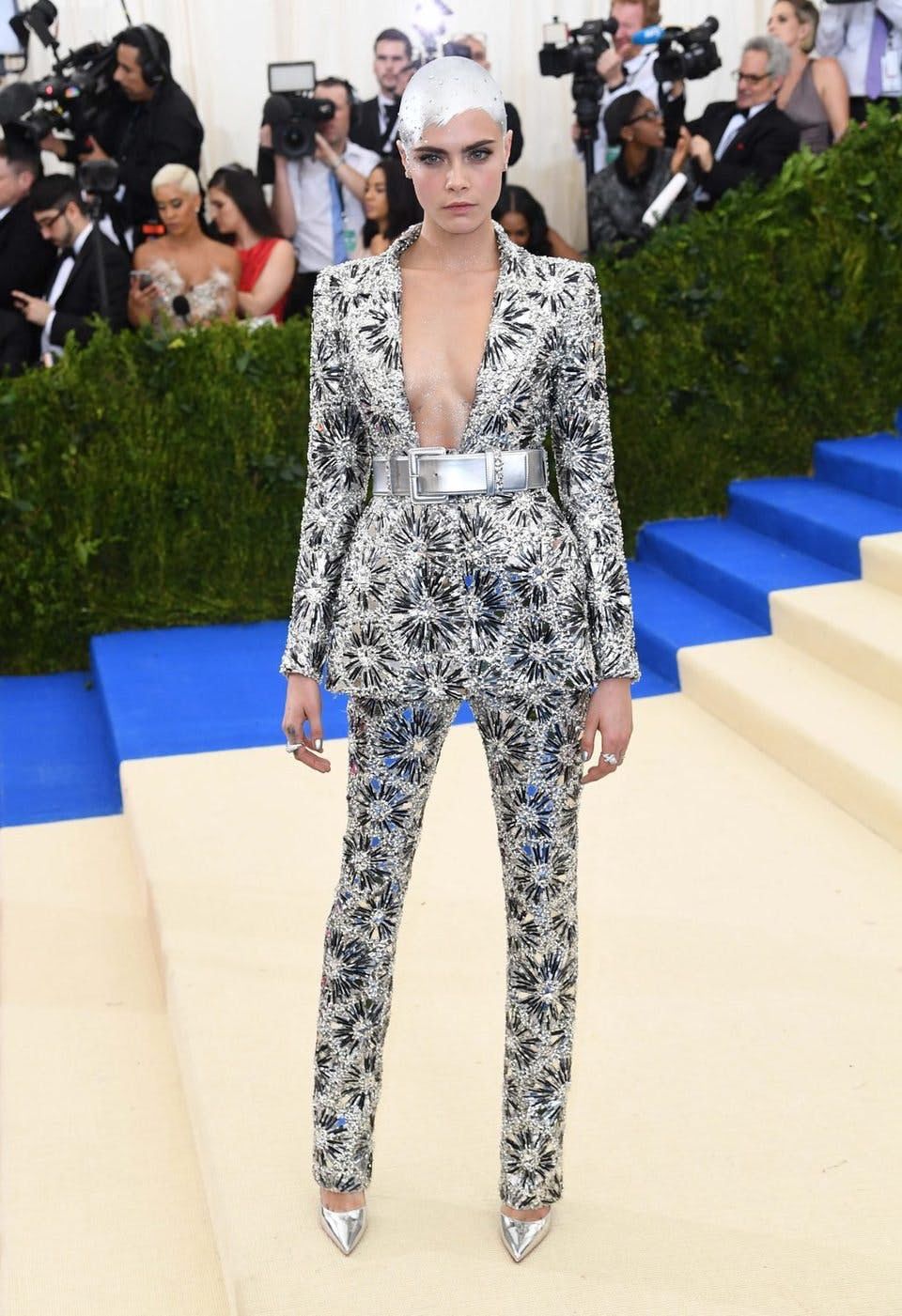 Cara Delevingne at the 2017 Met Gala. 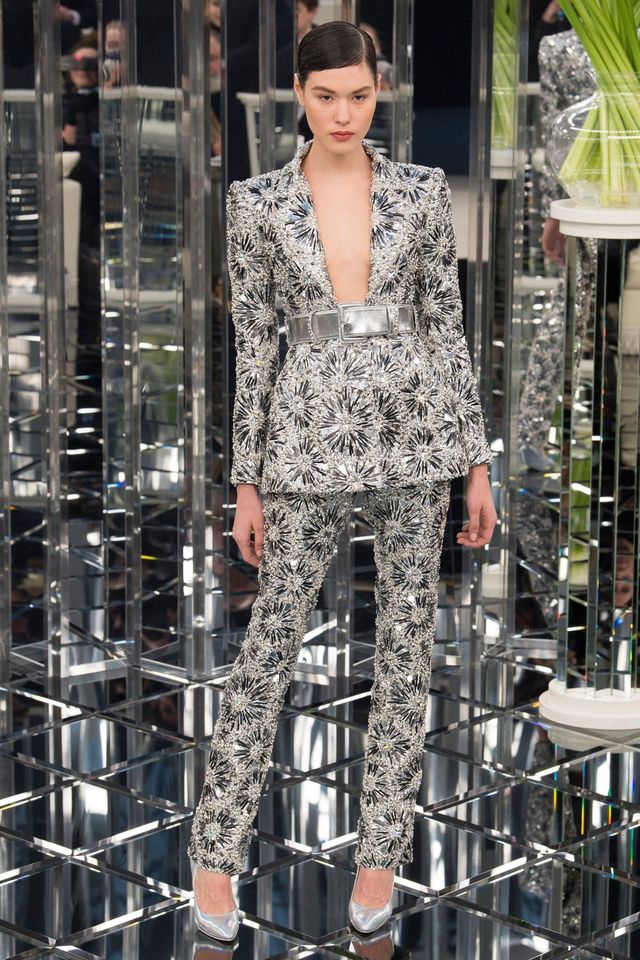 Coinciding with the Met Gala's futuristic theme for the 2017 event, Cara Delevingne sported a futuristic Chanel look for the event. The silver embroidered pant suit was made complete by coordinating accessories and slick hair from the model. 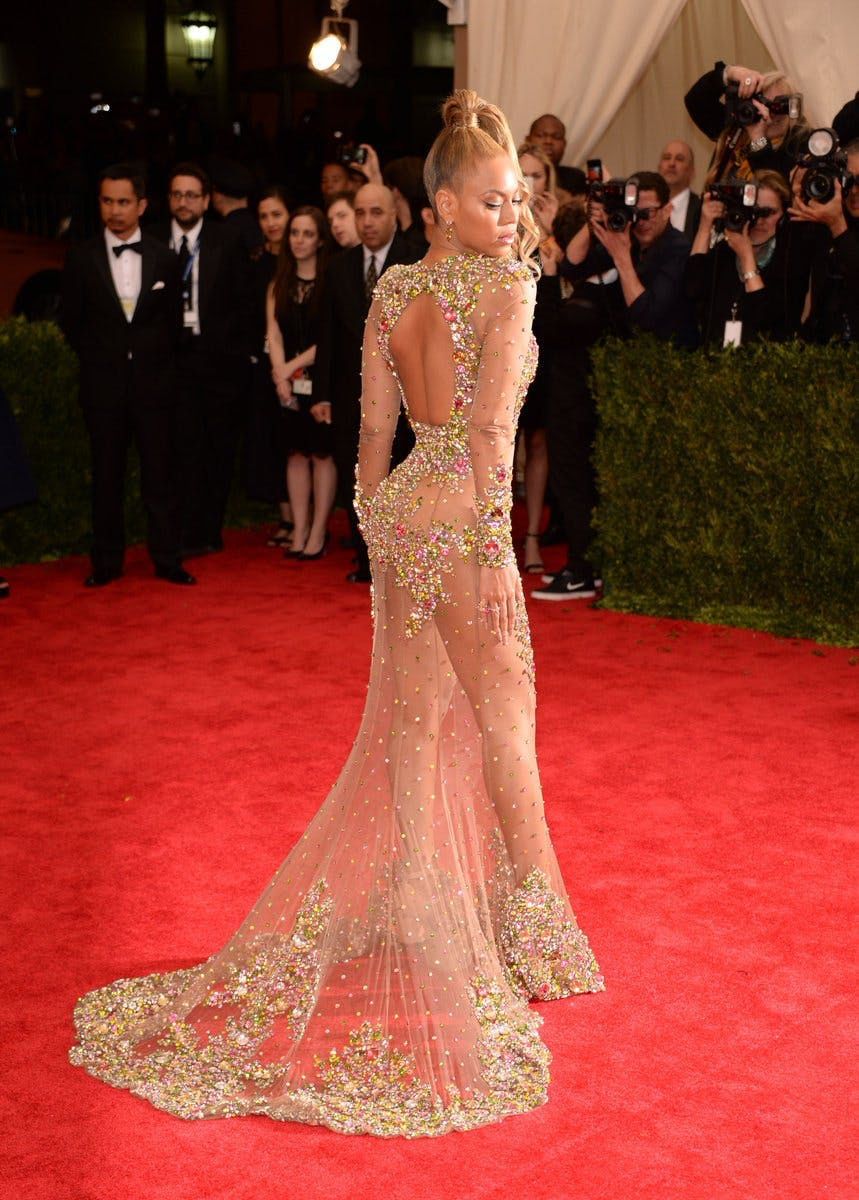 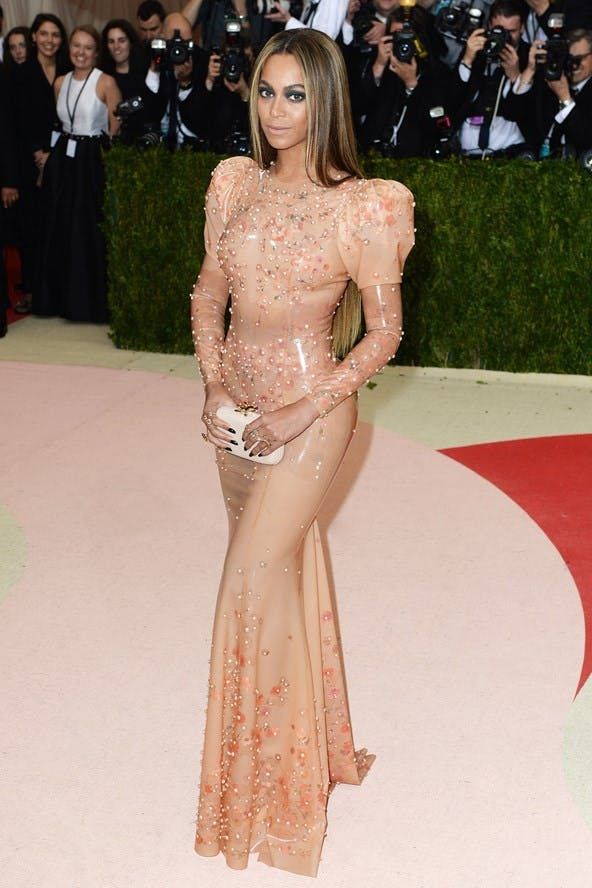 For both the 2015 and 2016 Met Gala, Beyoncé wore custom Givenchy Haute Couture looks that went down in fashion history. Working with then-creative director Riccardo Tisci, the star sported two looks that combined tailoring know-how with a certain aesthetic flair. 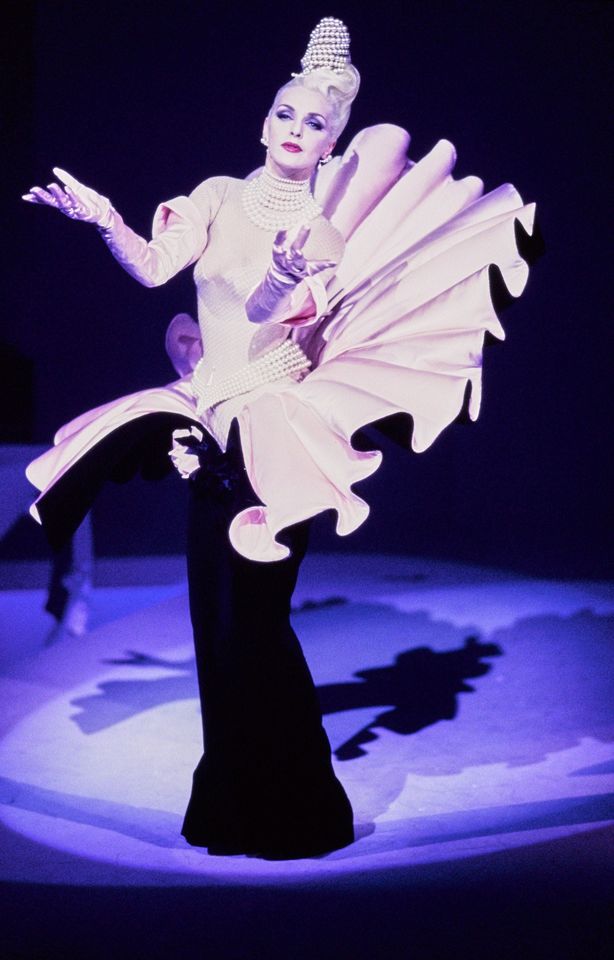 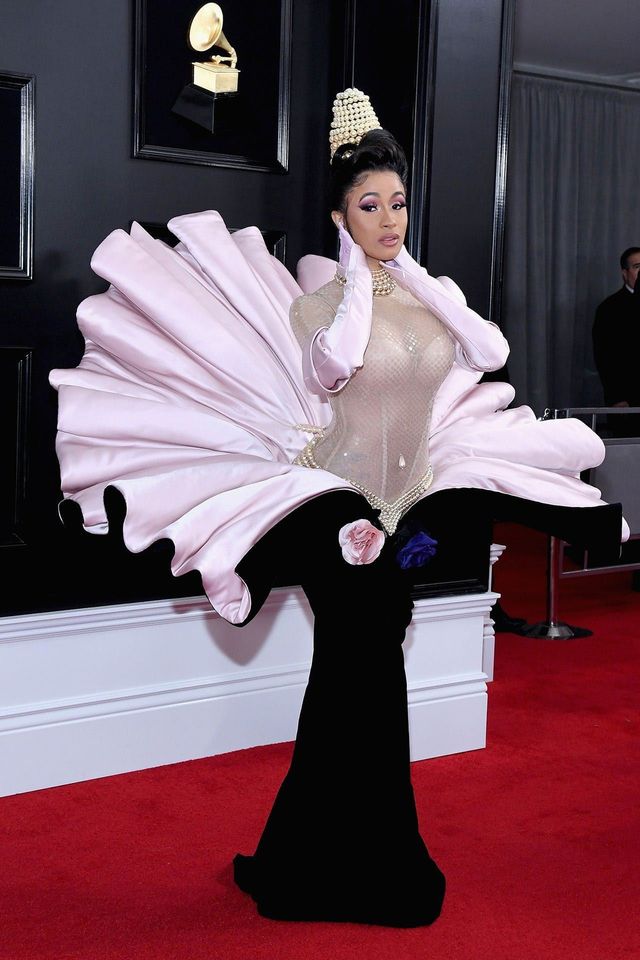 Cardi B featured a memorable couture moment from Thierry Mugler during the 2019 Grammy Awards. The singer sported the over-the-top gown that features pearl ornamentation and masterful tailoring on the red carpet and during a performance of her hit songs. 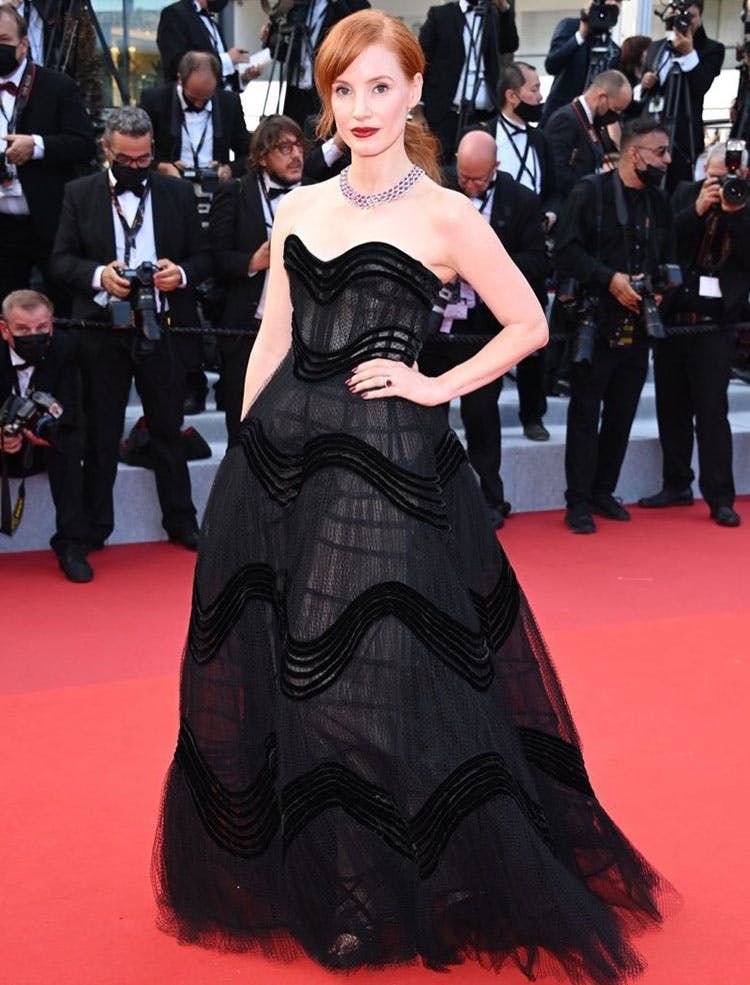 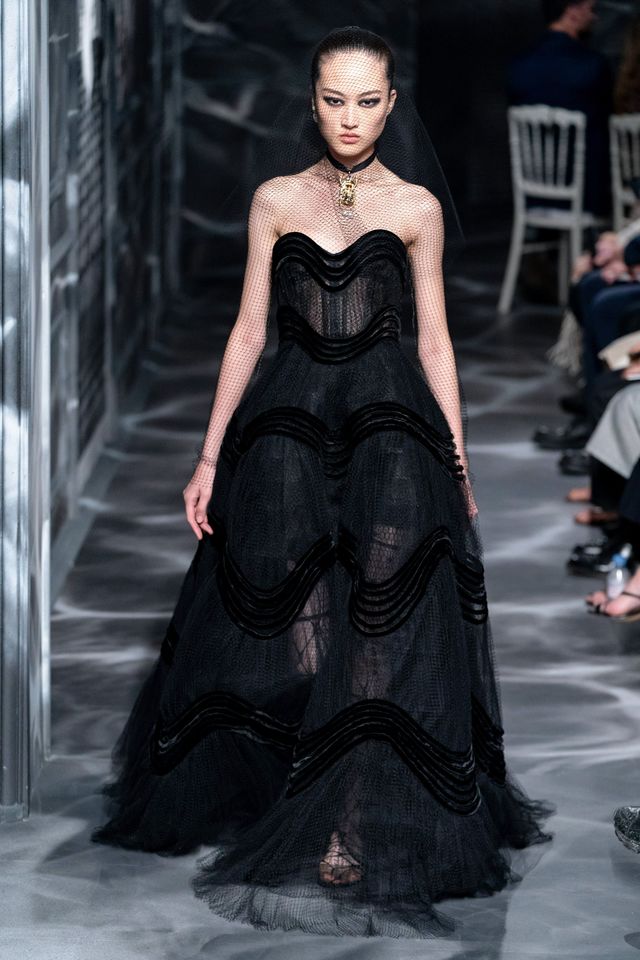 For the 2021 Cannes Film Festival, actress Jessica Chastain opted for a Christian Dior Haute Couture gown from the brand's Fall/Winter 2019 collection. The black gown featured a stunning bodice and sheer panneling throughout. 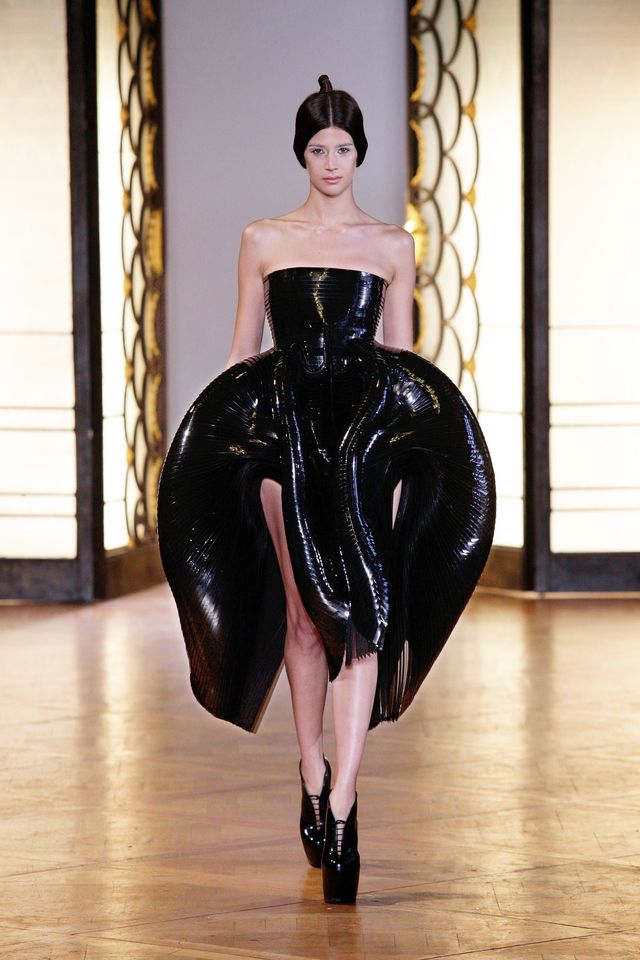 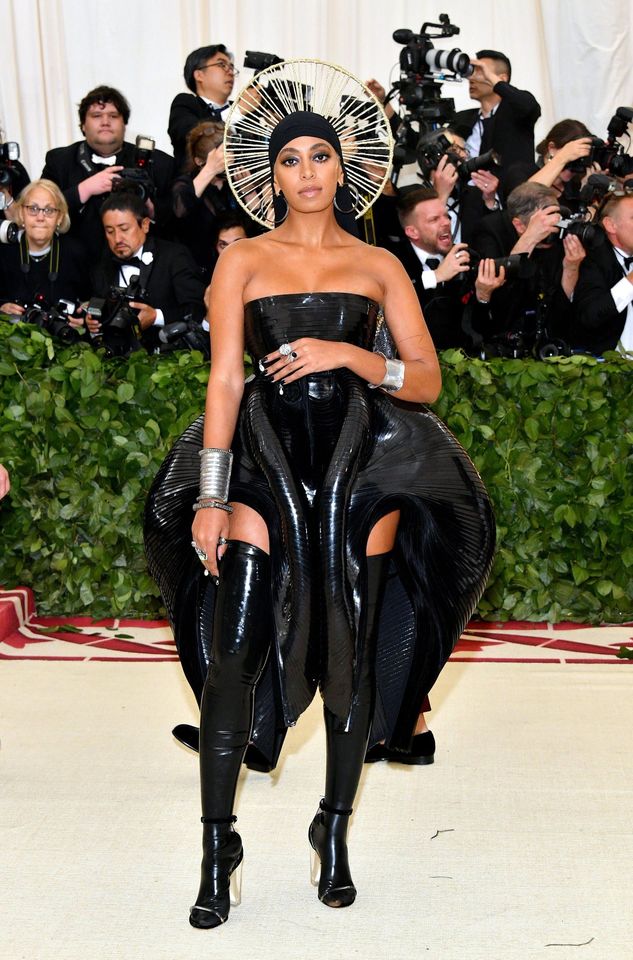 Artist Solange wore a sleek black Iris Van Herpen Haute Couture look at the 2018 Met Gala. The sculptural gown is from the brand's Fall/Winter 2012 couture collection and was reimagined by Solange through unqiue and forward-thinking styling.