From swingy bobs to jewel-toned pops of color, here are the seven standout hair and makeup trends from Paris Fashion Week.

Paris Fashion Week is always the grand finale of fashion month, and this fall 2022 season was no different, especially as the event saw the return of fully-fledged physical events–all the better for taking in both the most striking and subtle of beauty details. While hair was largely individual, certain statement-making trends emerged, such as fresh variations on the cool, jaw-length bob or the transformative powers of a nuanced fantasy hair color.

Makeup statements saw gazes washed in sumptuous shades that unapologetically celebrated the power of color, while shimmering metallics came in new and exciting forms, both on the eyes and lips—the latter by way of trompe l’oeil lip piercings. And because there can never be enough variations on a classic red lip, it was a thrill to see abstract takes that were still decidedly DIY-friendly. Here, the seven standout hair and makeup trends from Paris Fashion Week. 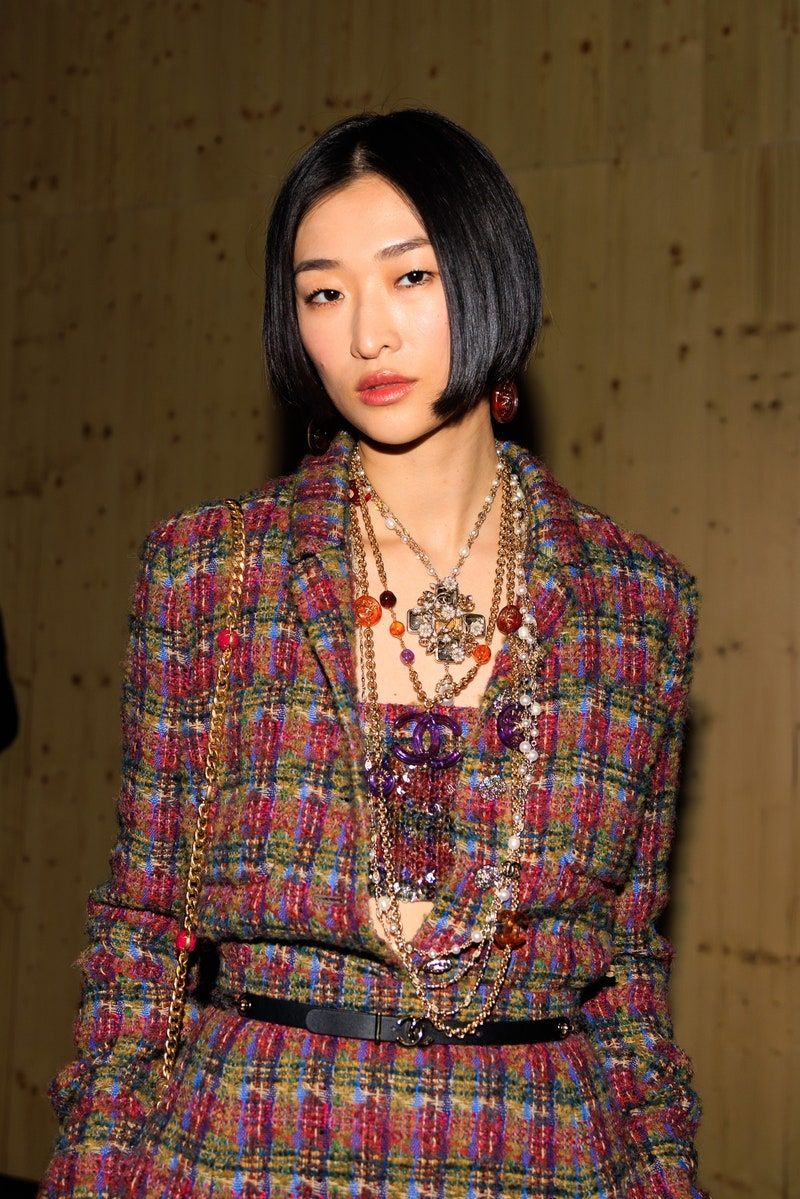 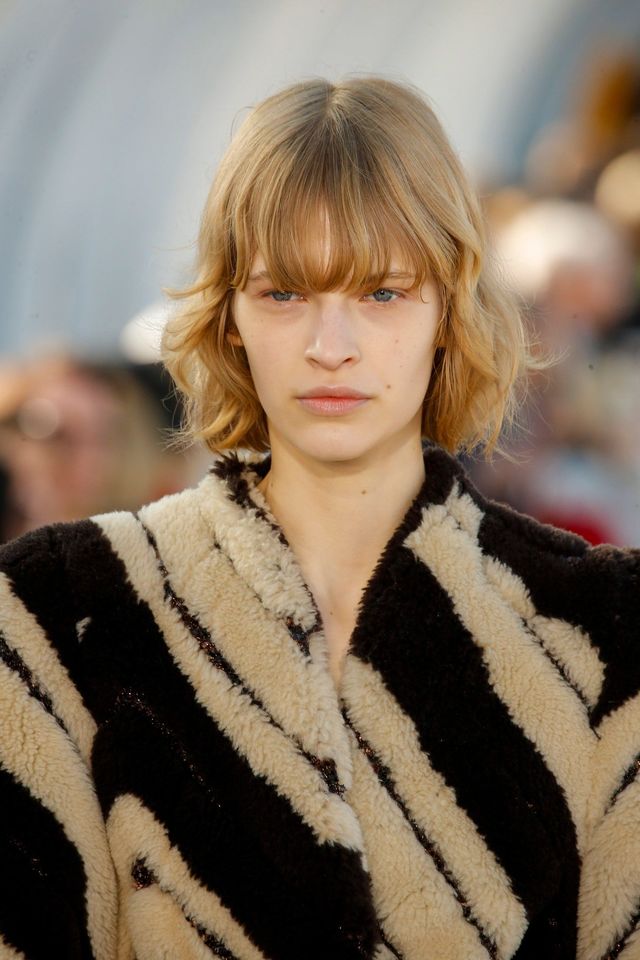 Consider it a reflection of the collective yearning for radical change: Fresh chops appeared on many a runway this season. A slew of different iterations were seen at Stella McCartney, where there were models with textured fringes and blunt, one-length chops alike. Then there was Chanel, where hairstylist James Pecis cut a total of 15 sharp Vidal Sassoon-esque bobs to complement the collection, which was partially inspired by England in the ’60s. “It’s rare that people want a really sharp jawline bob,” admits Pecis. All the more reason to embark on a new scene-stealing chapter. 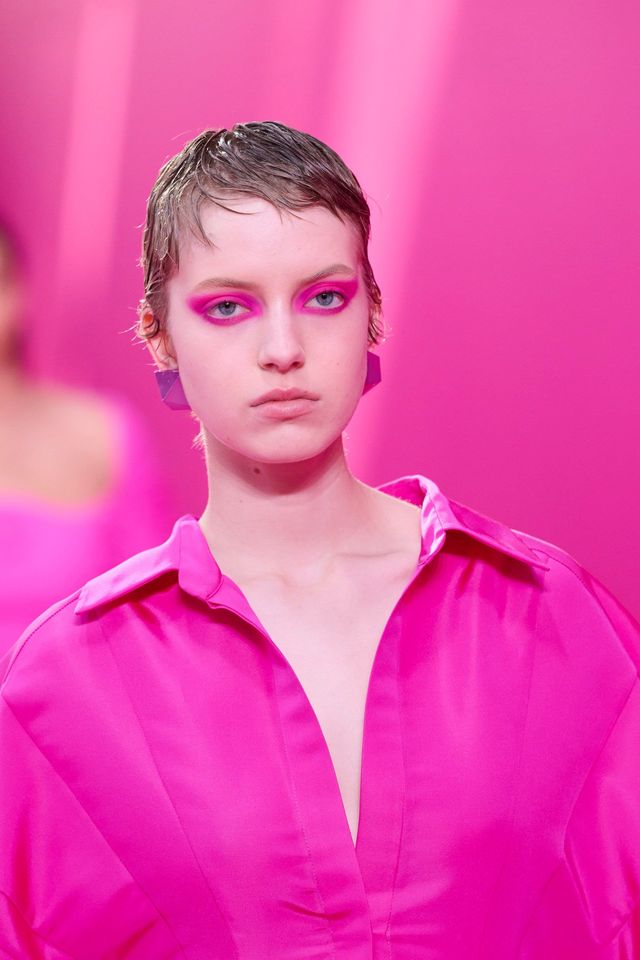 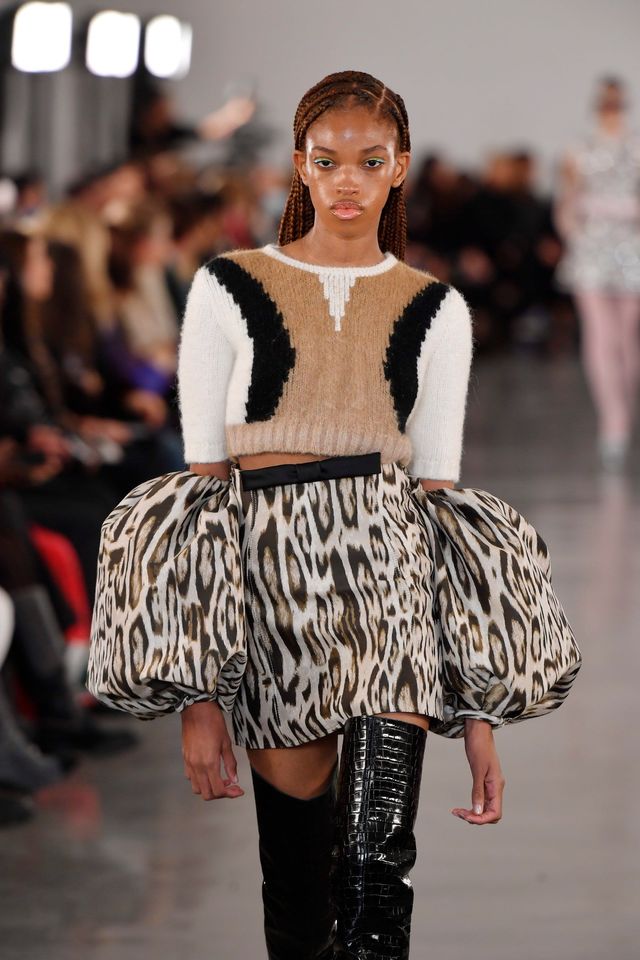 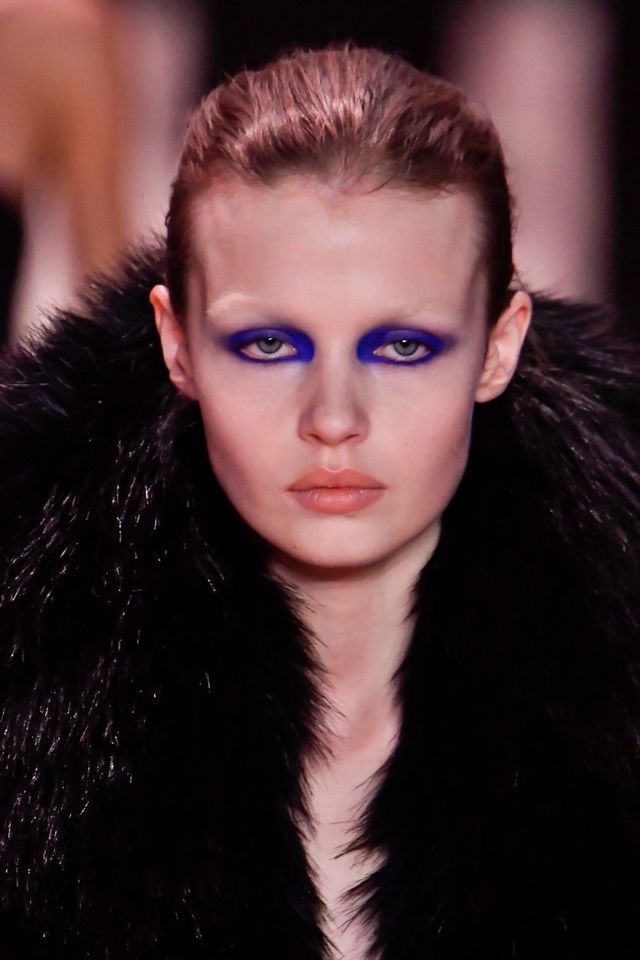 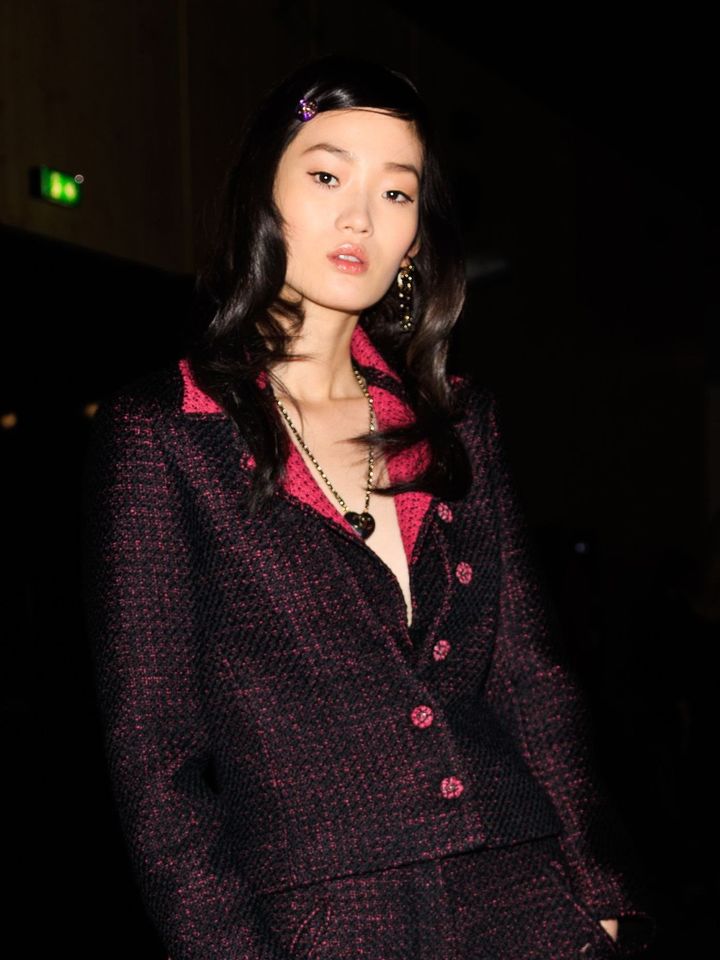 Of all this season’s color statements, it was the ones cast in rich jewel tones that made the greatest impact. At Saint Laurent, the almost entirely black collection was accentuated by shocks of saturated violet and Yves Klein Blue. Stark bleached brows only added to their boldness. Inspired by the “freedom, individuality, curiosity, and invention of pink,” makeup artist Pat McGrath coordinated Valentino’s graphic cat eye statements to the fuchsia collection. Taking things into 3D territory, eyes were punctuated with holographic winged stickers that reflected an electric shade of peridot green at Giambattista Valli. At Chanel, gem-minded hues arrived on the show’s array of Margot Tenenbaum-style logo barrettes. 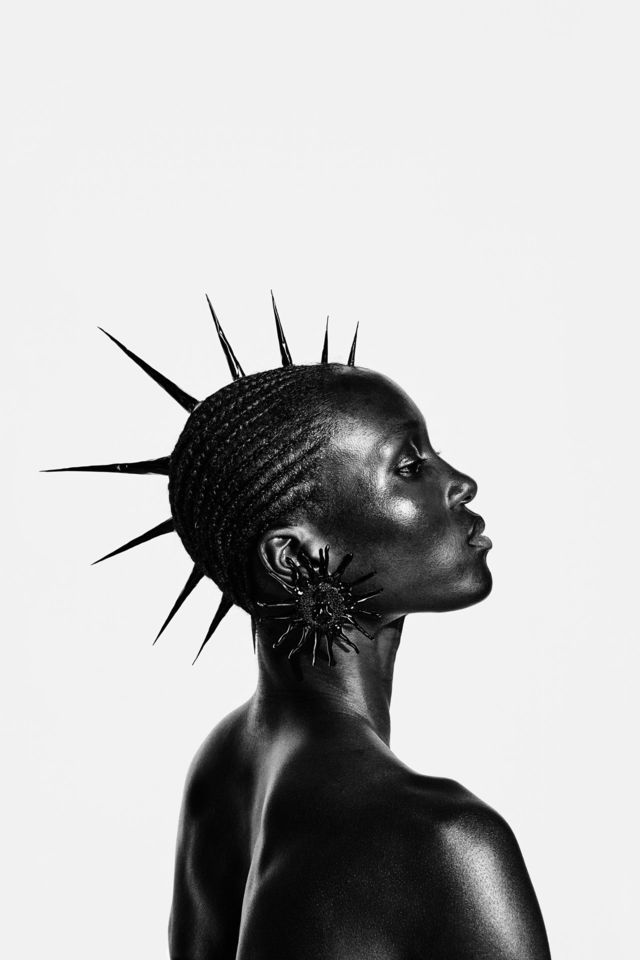 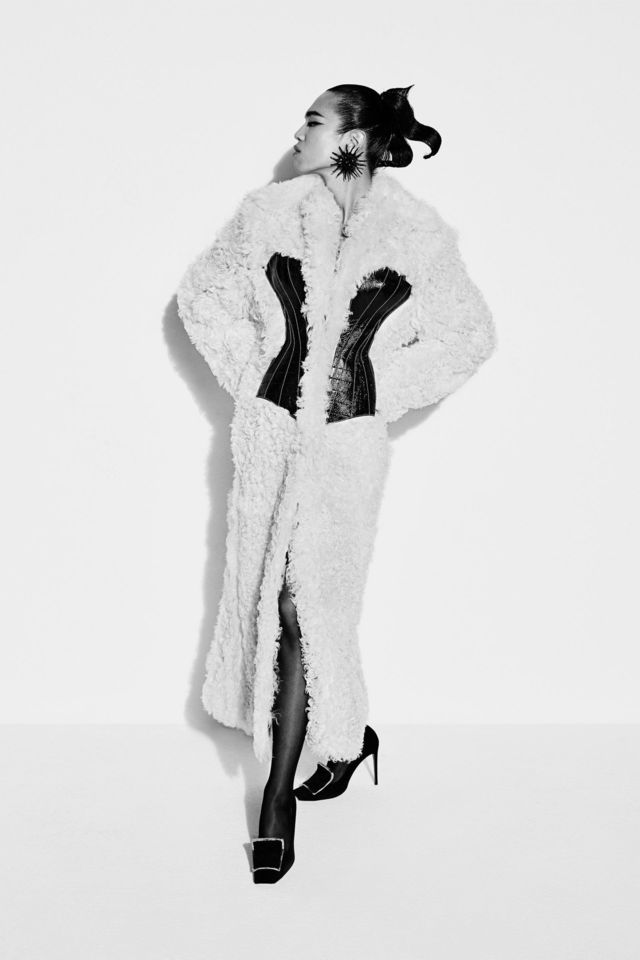 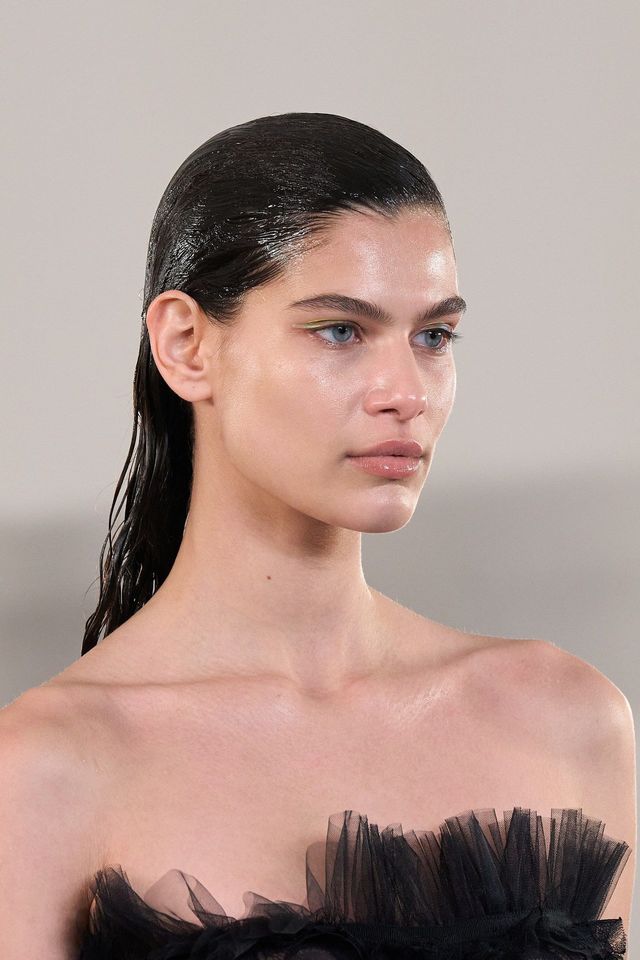 This season, sculptural hair (a runway mainstay), was both gravity-defying and slicked back and downwards—all thanks to Cyndia Harvey. For Schiaparelli, the pro crafted individual styles that were suspended in the air, such as model Dara’s sleek updo characterized by aerial, rippled shapes, and another model’s cornrow updo featuring a mohawk-like arrangement of thin, razor-sharp spikes. On the other side of the spectrum, were the seemingly sopping wet, glossy slick-backs at Giambattisa Valli. “They said wet, so I gave drenched,” Harvey wrote on Instagram. 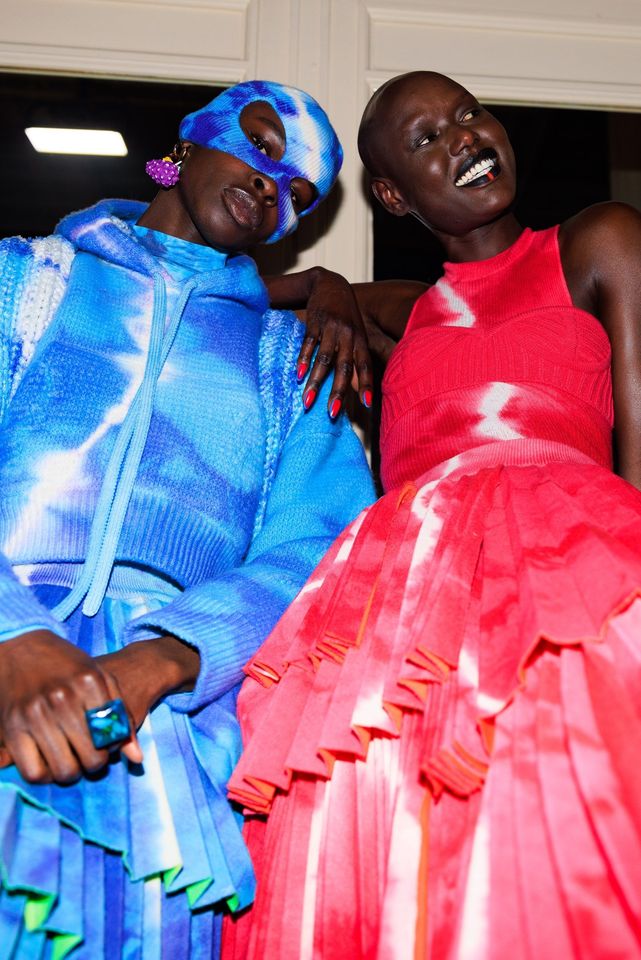 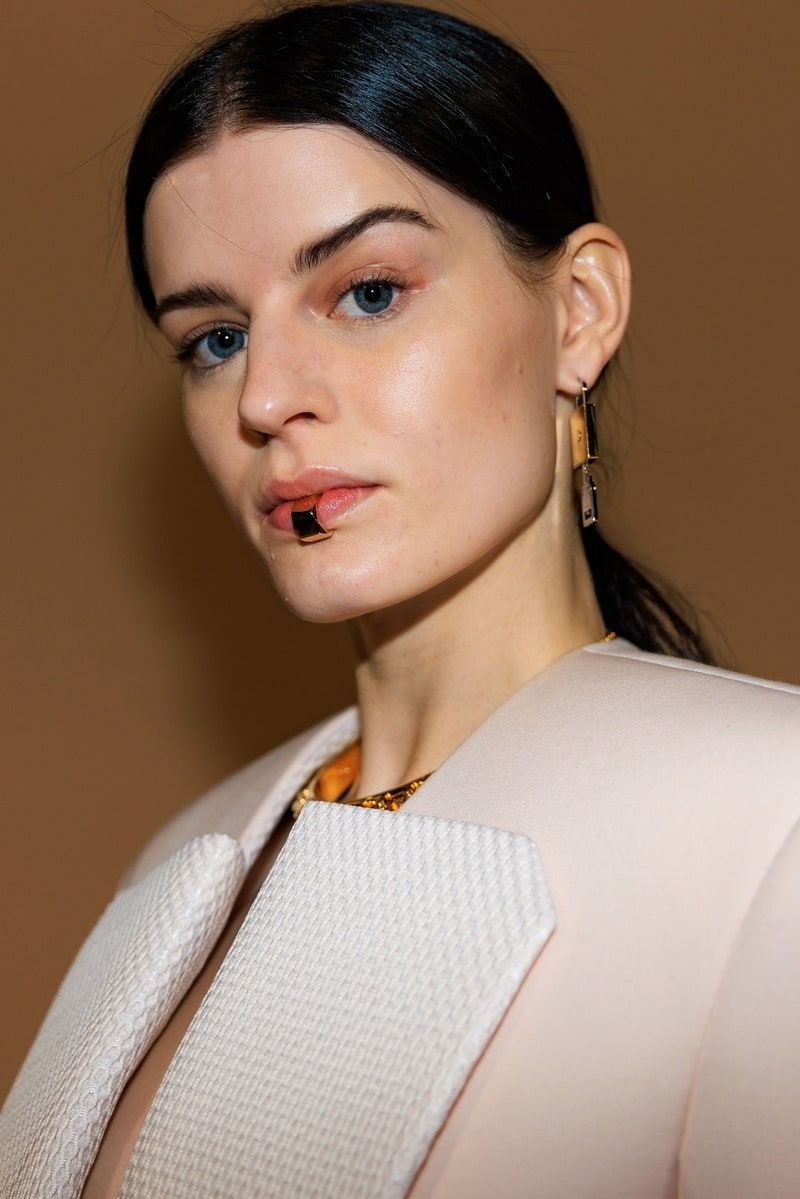 If you don’t want to commit to a permanent piercing, there are plenty of non-committal tricks. One such hack was demonstrated by the fluorescent trompe l’oeil lip rings at Off White, which makeup artist Cécile Paravina delivered in high contrast color combinations like jet black and hot pink. Another strategy is a lip cuff, which the Balmain runway showcased by accenting bare pouts with metallic gold and silver designs on the center of the lower lip. Or, for the most extreme statement of all, consider Givenchy’s temporary face piercings, which were pressed along the forehead above the eyes, showcasing the beauty of stick-on metal gems. 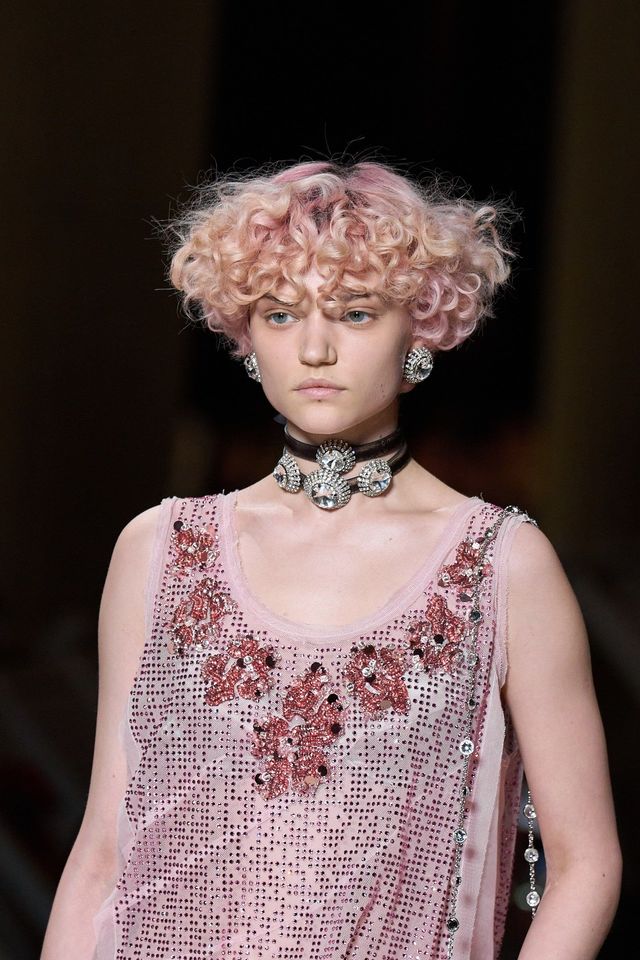 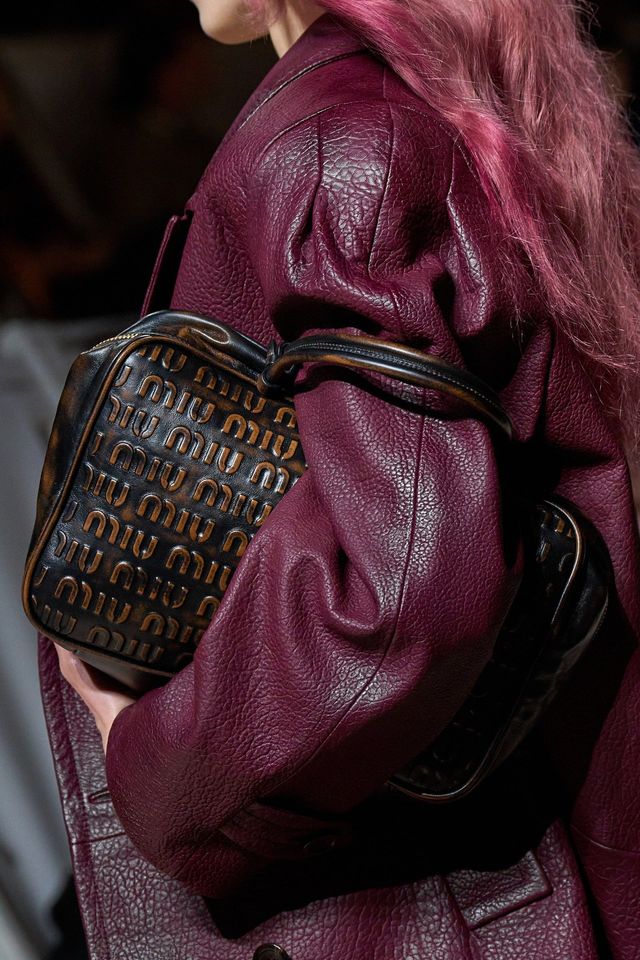 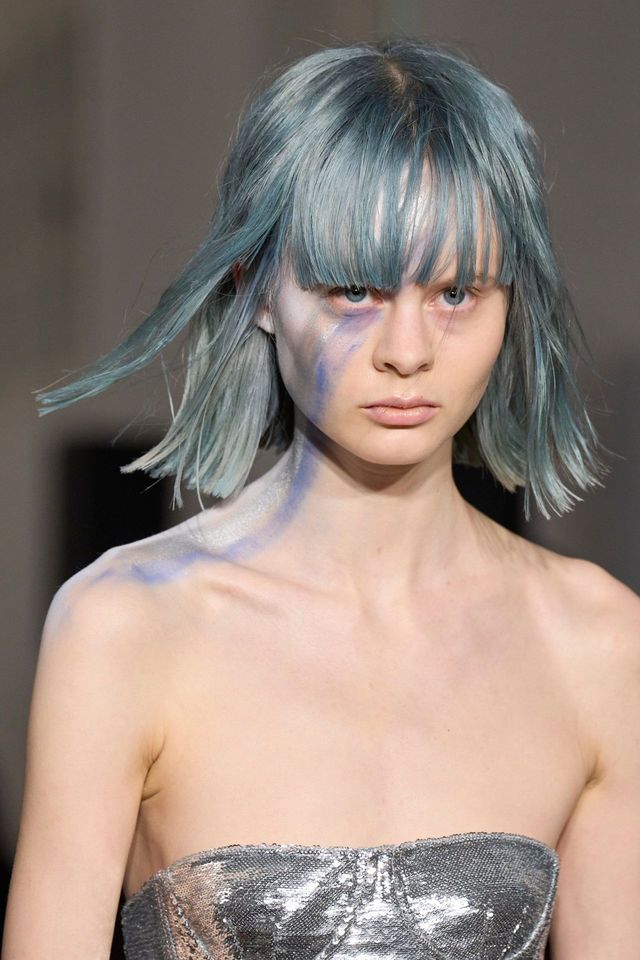 The beauty of this season’s biggest fantasy hair color trend is that the artificial hues only get cooler with each wash. There was no greater display of this notion than at the Miu Miu show, where one model had hazy burgundy lengths and another two had cropped halos of ringlet curls in baby pink and banana powder yellow. Another standout moment came courtesy of Rokh, where one model turned heads with her faded gray blue-toned lengths. 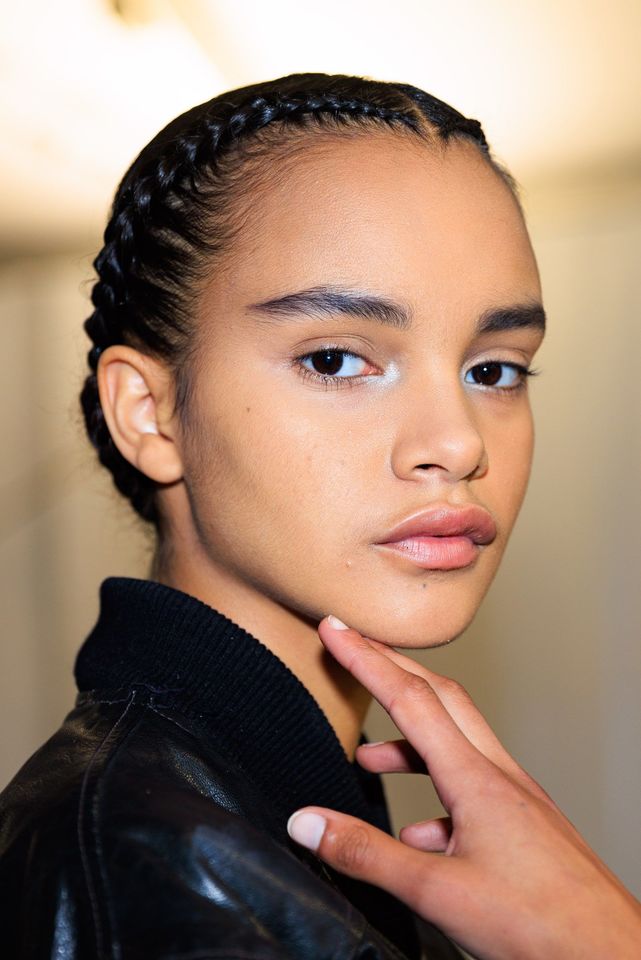 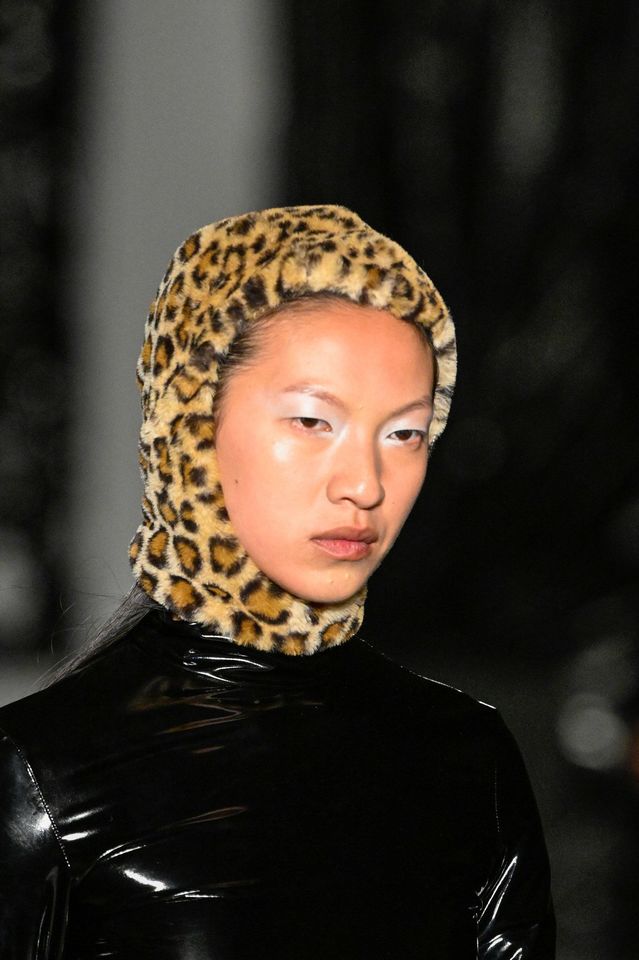 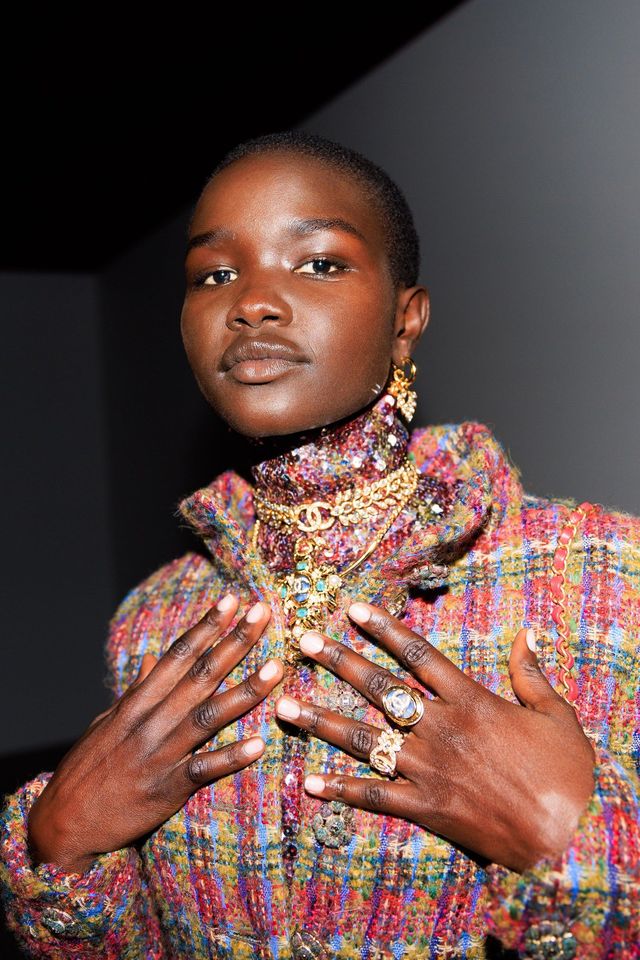 “It’s almost like a luminous spot of silver on the inner corners,” makeup artist Peter Philips said of this season’s directional Dior eye. “It’s very easy to wear, draws attention to your eye, and is something you can combine with almost any makeup. It adds vibrancy to your look.” The fruits of a strategically placed wash of metallic on the eyes was also on display at Vaquera, where pro Fara Homidi shaded select model lids in a silver white that emitted a soft celestial glow. 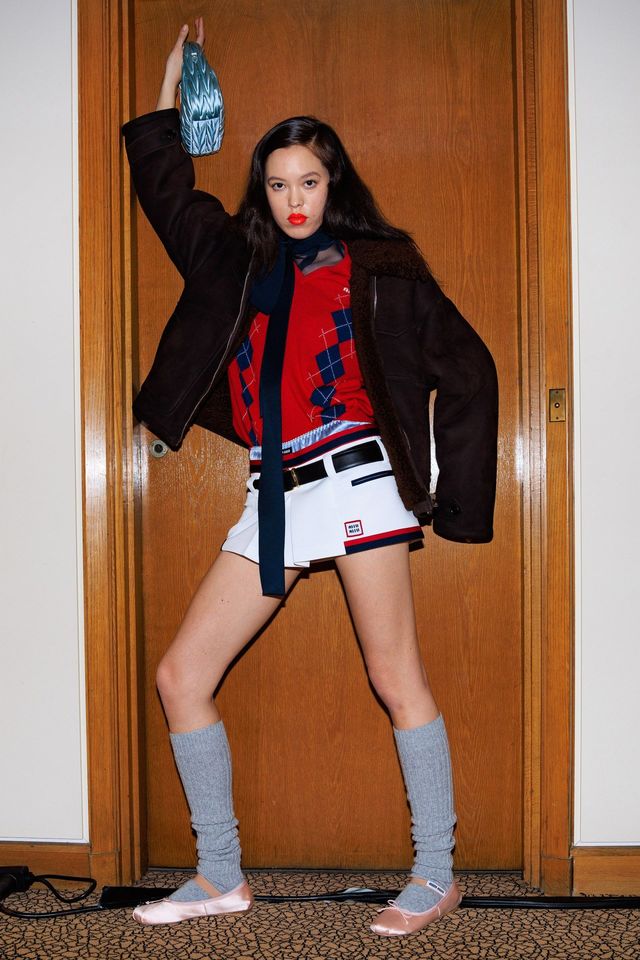 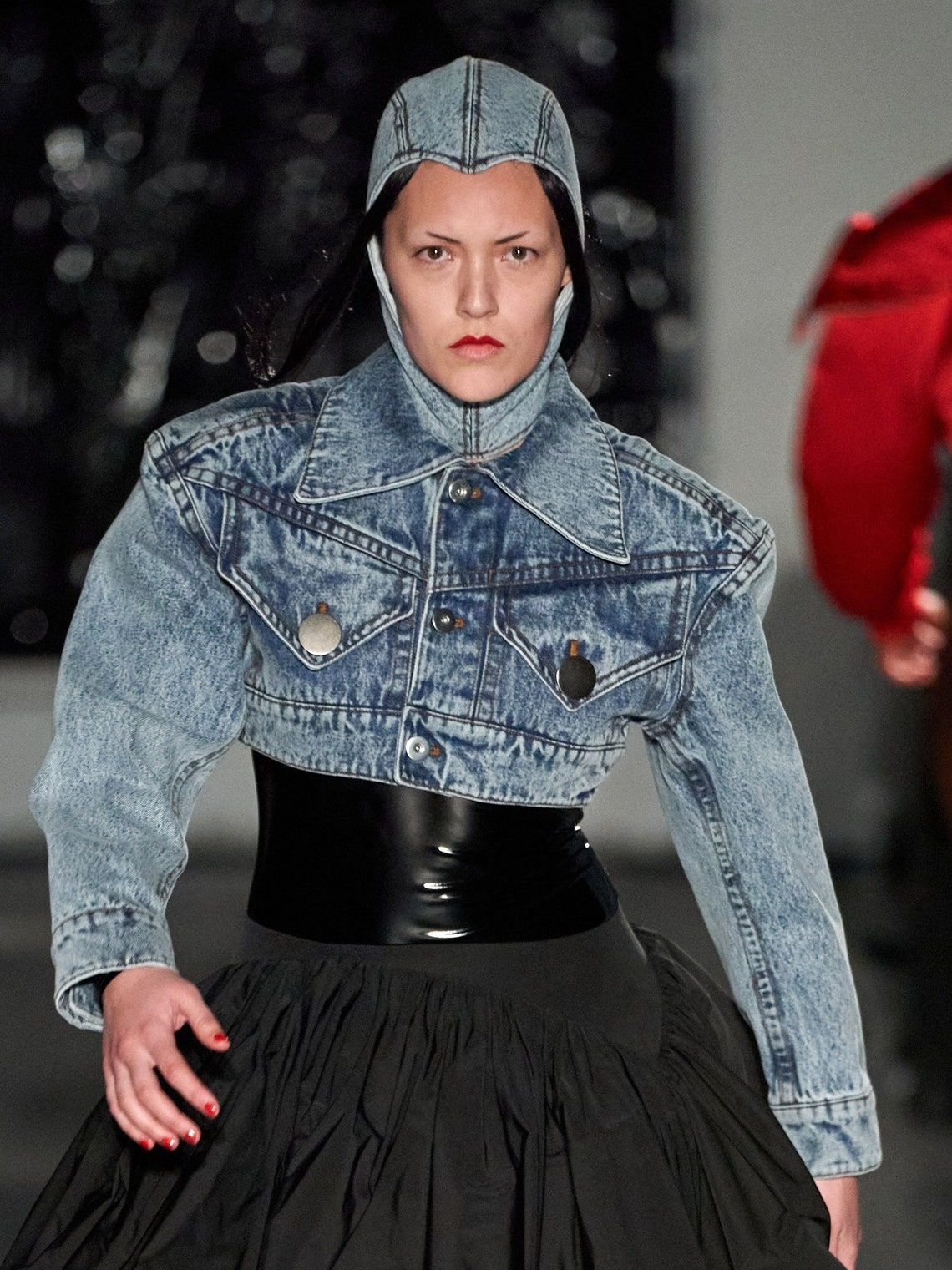 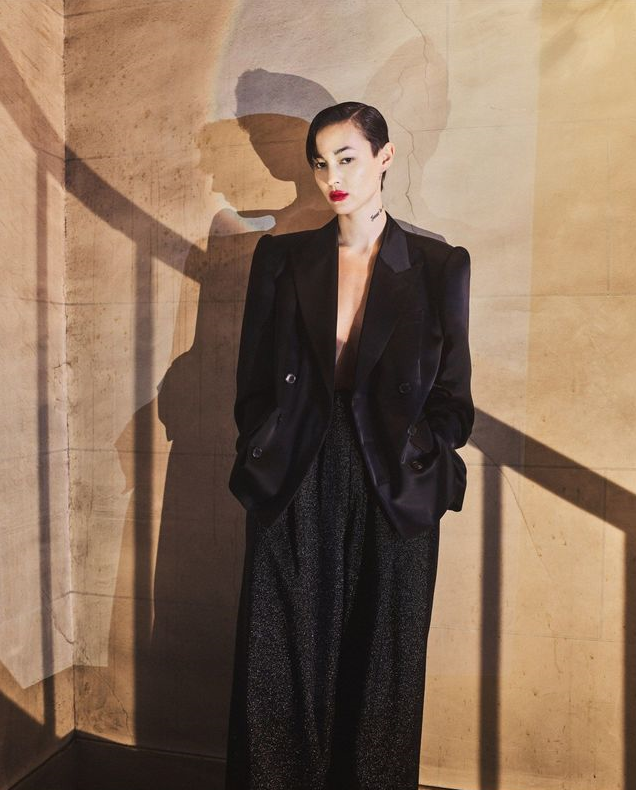 Dries Van Noten
How to make the perennially classic red lip feel fresh? Experiment with shape and finish. At Miu Miu, makeup legend Pat McGrath further projected neon bright coral red pouts by adding a slick of clear gloss to vinyl–and light-catching!–effect. Then there was that deconstructed crimson lip at Vaquera, which saw Homidi saturating the top lip in red pigment and leaving the bottom nearly bare. Finally, an ombré effect was presented at Dries Van Noten in a fuchsia-tinted red, a blurred finish welcoming a little imperfection.