A look back at the top seven hair and makeup trends of the spring 2022 season.

Fashion month has come and gone. Now it’s time to meditate on all we saw-including the through lines that will come to define spring’s beauty trends. Once again, post-pandemic dreams of freedom and revelry are coming to life on the runway in the form of celestial applications of glitter and artful hair characterized by vibrant color, directional craft, or well-placed ornaments. The Y2K redux is also at play, with the sleek center parts and more-is-more shine that were beloved at the turn of the millennium making an undeniable return. Looking ahead, this season’s most memorable eye statements saw an embrace of electric pigments that were exuberant and future-looking in neon shades and streamlined shapes. Here, a look back at the top seven beauty trends of the spring 2022 season.

Shine and sparkle came out swinging at New York Fashion Week, from Collina Strada’s hazes of earthy “fairy garden” glitter on the ears, hands, and feet to LaQuan Smith’s sexy winged eyes in rich ruby red and navy blue shades. It only gained momentum from there. “It’s like they’re little diamonds dancing around the skin as they walk and move to the music,” said makeup artist Inge Grognard of the Y2K-esque body glitter backstage at Blumarine, where hairstylist Anthony Turner was also administering washes of shimmer to give long, brushed-out waves a hologram-like glow. In Paris, ethereal shine appeared at Lanvin, where makeup artists smudged cellophane-like violet pigment on the lids, adding an extra pop of glittering marigold on the inner corners to color-blocked effect. 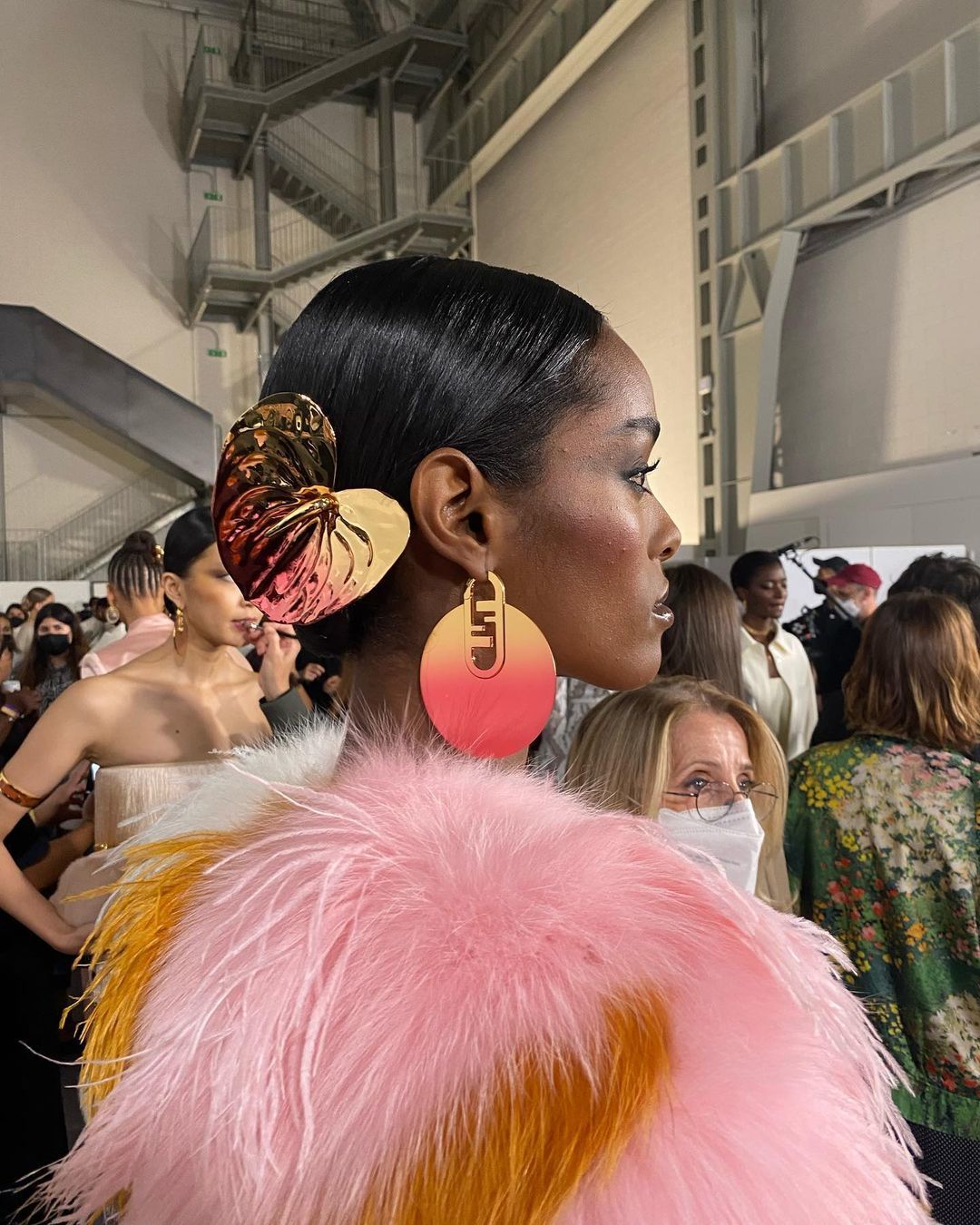 There was a trove of statement-making hair accessories to take in this season. Among the standouts were Maryam Nassir Zadeh’s chunky geometric barrettes and Tory Burch’s stacks of metallic and monochrome barrettes, which added a dose of downtown–New York polish to wispy, raked-back hair. Then in London, Simone Rocha served up sparkling tiaras and Yuhan Wang introduced small, colorful crystal bloom baubles. Most arresting of all? At Fendi, anthurium hair pins, cast in Murano glass and designed by Fendi scion Delfina Delettrez, were fastened into ’70s-inspired waves and sleek chignons in an ode to fashion illustrator Antonio Lopez. 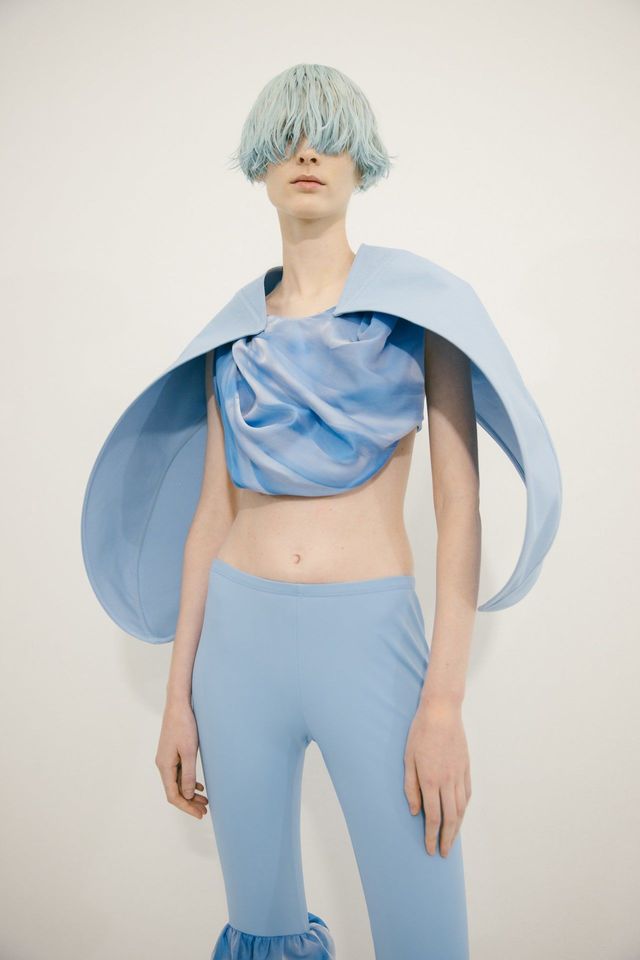 “It’s hair as an accessory-almost like how you’d pair a handbag with a certain outfit,” said hair legend Guido Palau backstage at Loewe, where choppy wigs in subversive vivid shades like deep turquoise and amethyst purple were the ultimate statement. Palau’s philosophy summed up the attitude at many shows, like Halpern and Dries Van Noten, where unexpected cuts, materials, and psychedelic shades-most impactful in combination-made the case for getting experimental. 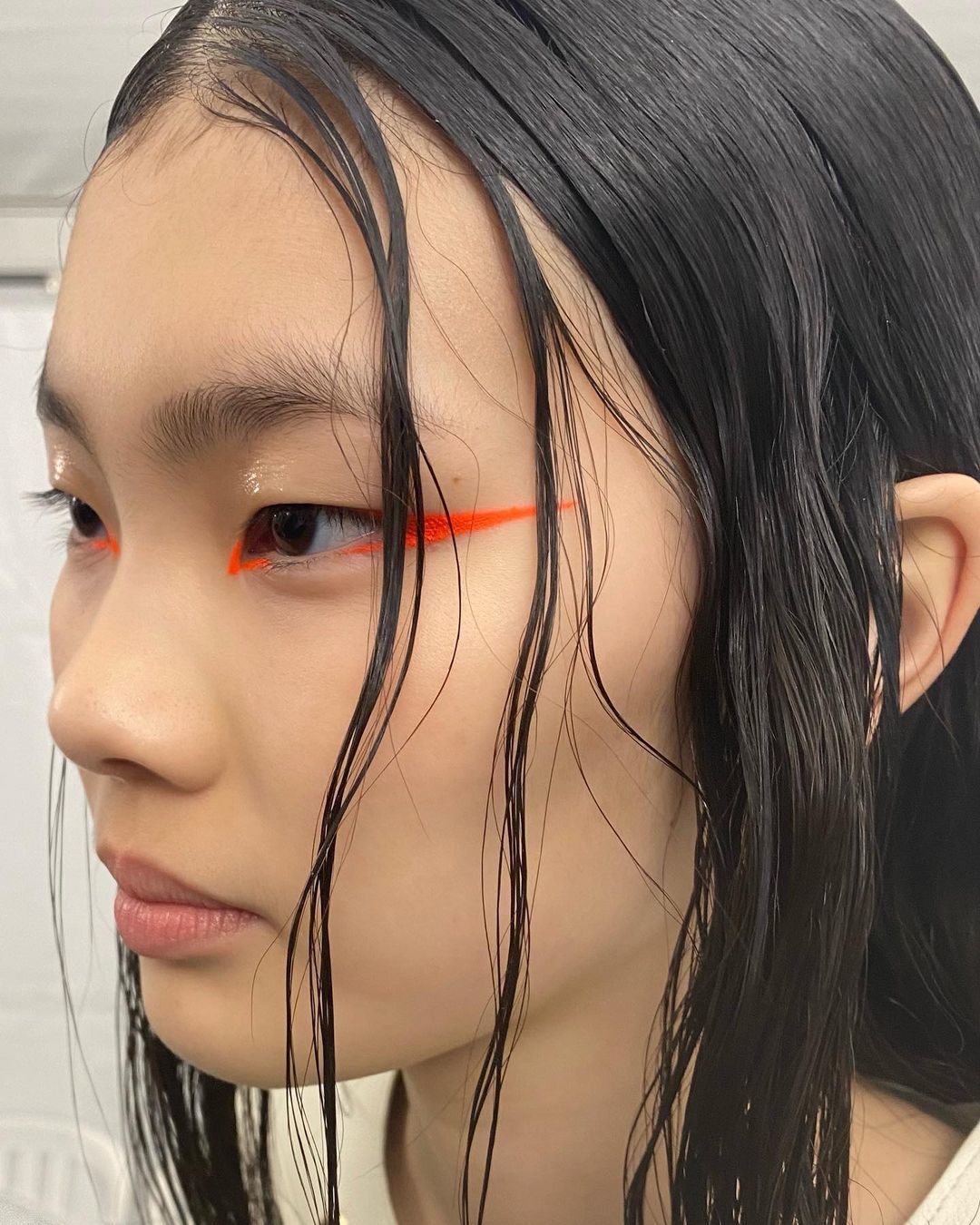 There was plenty of traditional black eye paint throughout the month, but it was the acid-bright strokes and dashes of color that are most seared into our memory. At Proenza Schouler, saturated washes of electric fuchsia and tangerine on the lids broke the mold, while at Versace and Chloé, bright smudges of color were the linchpin of every look. Perhaps the most extreme instance was Weinsanto, where the most blinding shade of hot pink was saturated on the eyes, cheeks, or center of the lips.

Lip gloss continues to be laid on thick and unapologetically in Y2K fashion. To top off the fully realized disco glam looks at Fendi, there were high-gloss nude and bold red pouts. At Blumarine, it wasn’t just the lips, but the lids too that received slicks of transparent MAC Lipglass to catch the light and reflect the surrounding gleam. Then at Giambattista Valli, makeup artist Isamaya Ffrench played up dewy complexions with glossy lips in shades of coral and dark berry, while at Nina Ricci models sported lacquered pouts that leaned more au naturel.

Call it the Gen Z effect-the obsession with middle parts continues. From the lived-in bobs at Chanel to the myriad of poker-straight partings at Prada, the universal appeal of a sleek, symmetrical center part was continuously on display. It does, after all, lend itself to all lengths and textures. Not to mention the style’s eternal French girl appeal (see: the parade of interpretations at Hermès).

Whether by way of painterly strokes of pigment or decorative decals, embellishment catapulted otherwise bare complexions to a different dimension. Echoing the illustrated beadwork on the clothes at Rodarte, makeup artist James Kaliardos freehanded intricate fine art designs around select model gazes to trippy, living canvas effect, while at Kenneth Ize, lids, noses, and elongated talons were dripping in metallic gold paint in a surrealist spirit. Taking things to another dimension, 3D makeup looks inspired awe at Luar, where pearl decals accented razor-sharp cat eyes, and Etro, with a constellation of metallic silver gems decorating the under eyes. Finally, there were the heart-stopping sequined lips at Acne, which took texture and shine to the next level.