Rishi Sunak has been accused of failing to do enough to help embattled hospitality businesses through the Omicron wave after refusing to bring back furlough for the hardest-hit firms.

Succumbing to intense pressure to offer financial support amid a collapse in pre-Christmas trade for pubs, restaurants and hotels, the chancellor announced a £1bn bailout package on Tuesday consisting of business grants and help with sick pay.

However, it drew an angry response from bosses who told Sunak he was failing to grasp the severity of the Omicron shock to the economy and that a lack of clarity from the government over the need for further pandemic restrictions was making matters worse.

Comparing the plan to a “dud cracker on Christmas Day”, Tim Rumney, the chief executive of the Best Western hotel chain, which employs 10,000 staff in the UK, said a return to furlough was vital if the current Covid wave continues.

“It’s just so disappointing and underwhelming in every sense. It doesn’t go far enough in our opinion, it doesn’t go deep enough and it’s too little too late,” he said.

Michael Kill, the chief executive of the Night Time Industries Association, said a stuttering open/close approach to government restrictions was “crucifying business” during a pivotal period for trading before Christmas.

“Every pound of help is much needed. But this package is far too little and borders on the insulting,” he said. 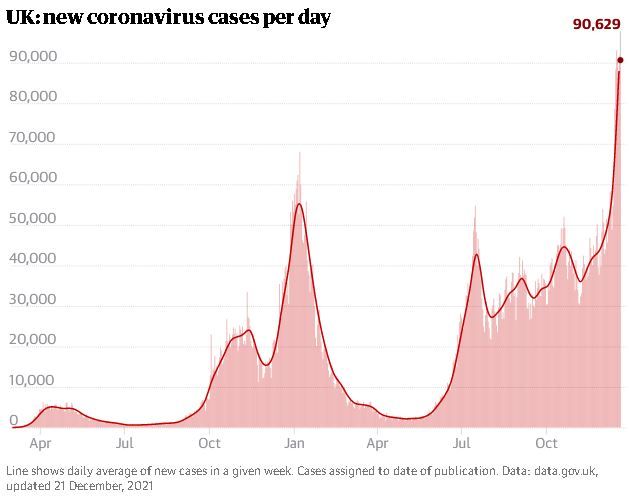 Sunak said the government was intervening because “the spread of the Omicron variant means businesses in the hospitality and leisure sectors are facing huge uncertainty, at a crucial time”.

*  Grants for hospitality and leisure businesses in England, worth up to £6,000 per premise. The Treasury has set aside £683m for these payments, which will be administered through local authorities and will be available in the coming weeks.

*  Further grants for businesses in England, worth £102m, intended to help businesses most in need, and again administered through local authorities.

*  An extra £30m for arts organisations , paid through the culture recovery fund.

In addition, the Scottish government will receive £150m, the Welsh government £50m and the Northern Ireland executive £25m under the Barnett formula to offset the England-only spending.

It follows pressure on the chancellor to reboot the multibillion-pound furlough job support scheme to cushion the financial blow for firms and to help workers amid a worsening economic outlook and a cost of living squeeze.

Frances O’Grady, the general secretary of the Trades Union Congress (TUC), said the measures announced by the chancellor amounted to “abandoning” workers ahead of Christmas and as the pandemic worsened.

“The economic support measures announced today are not conditional on employers keeping workers on and covering their wages. And they do nothing to fix the gaping holes in our sick pay system,” she said.

The Treasury’s statutory sick pay rebate scheme covers employers’ costs, rather than supporting an employee directly, and does not boost the amount available. The TUC estimates 238,000 hospitality workers – about one in six of the workforce – do not qualify for statutory sick pay.

“Millions of workers will go into Christmas worrying for their jobs and anxious about what they will do if asked to self-isolate. The chancellor must go back to the drawing board,” O’Grady said.

No firm has been legally required to close under plan B, which was announced by Boris Johnson for England earlier this month and which extended the use of face masks, required Covid passes for some venues and encouraged working from home.

But the move to plan B was quickly followed by advice from Prof Chris Whitty, the chief medical officer for England, that people should limit their socialising over Christmas to people and events that “really matter” and this, combined with a surge in Covid cases, led to dramatic falls in the number of people going to pubs, restaurants and shows.

The measures announced by the Treasury on Tuesday are intended to compensate for the loss of earnings that businesses are already suffering.

Ministers have not ruled out imposing further restrictions on socialising after Christmas, which could lead to calls for a further bailout for hospitality.

When Sunak was asked in an interview if businesses would be offered more support if the rules tightened again in the coming days, he gave a non-committal answer.

He said he would always respond “proportionately and appropriately”, but he said the business grants he was announcing were “comparable to the grants that we provided for hospitality businesses when they were completely closed earlier this year”, and said other help for business was already in place until the spring.

Shevaun Haviland, the director general of the British Chambers of Commerce, said the measures were “a positive starting point” that would provide “some welcome respite” to firms hardest hit by the latest Covid wave.

But she urged the Treasury to ensure grants were paid out quickly, and said more help may be needed. “If restrictions persist or are tightened further, then we would need to see a wider support package, equal to the scale of any new measures, put in place,” she said.