What can ants and meerkats teach us about parenting? Evolutionary biologist Nichola Raihani uncovers the ancient social instincts that still shape our families today.

I wrestled the remote control off my children and perched on the sofa, bracing myself for what was coming. It was March 2020, and caseloads of a novel and dangerous coronavirus were rising quickly here in the UK. Our Prime Minister was about to announce a lockdown. Schools and nurseries were going to close. Like millions of other parents, I was about to become my young children's de facto school teacher. The idea filled me with dread.

I wasn't the only one feeling that way. My phone buzzed as messages flooded the school WhatsApp channel, with parents wondering how they were going to fit the demands of their day jobs around fronted adverbials and long division.

Over the months that followed, many parents felt a crushing toll on their mental and physical health. More lockdowns and school closures ensued, along with reports of a worrying increase in levels of parental stress, anxiety and depression. Many asked themselves why this was so hard. Shouldn't we be naturally good at raising our young without outside help? Didn't humans cope without schools and daycare in the past, after all?

As an evolutionary biologist, I do not hold the answers to all pandemic-related family crises, but I can say one thing for certain: as a species, humans are spectacularly ill-equipped to deal with parenting in isolation. 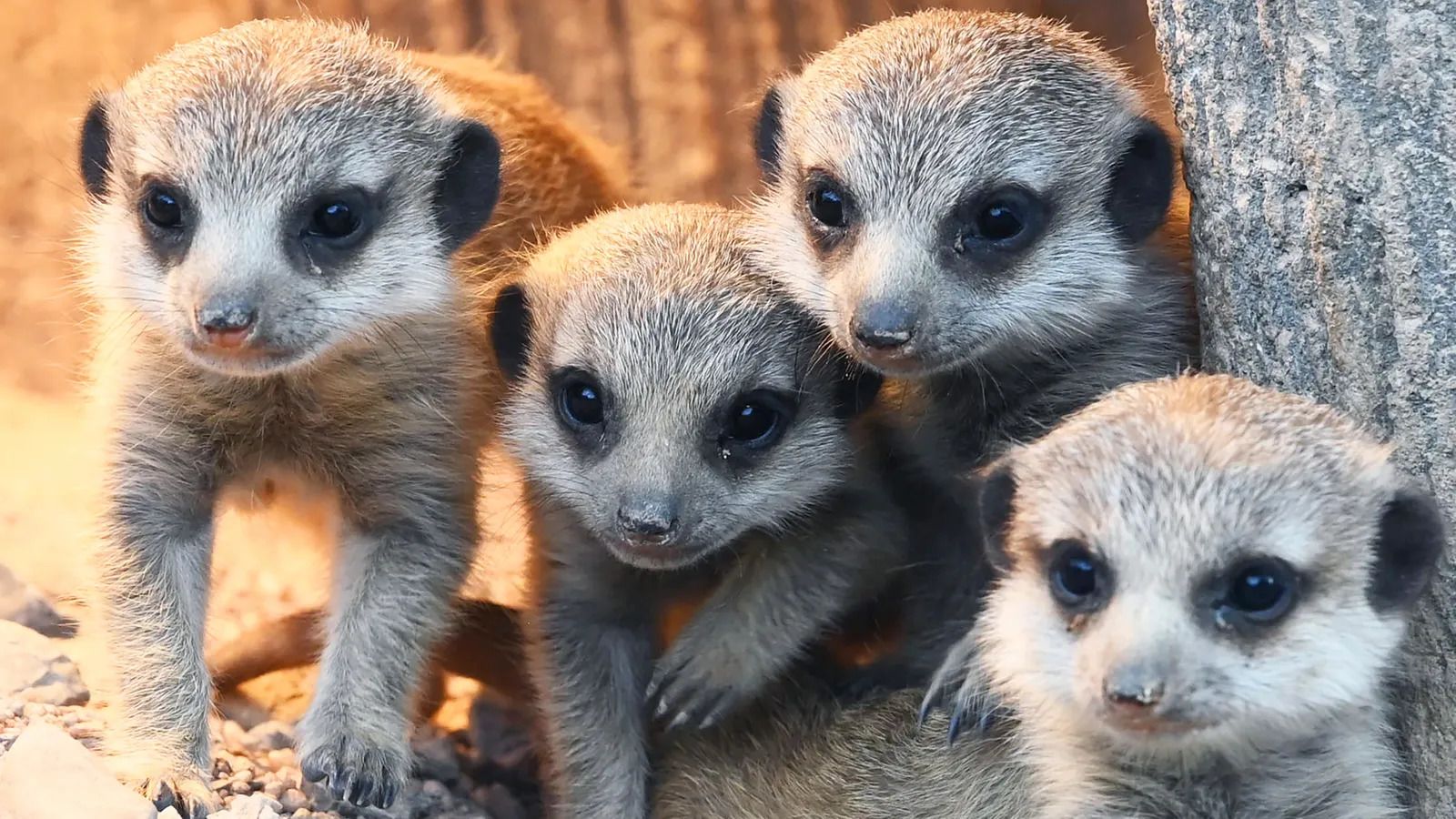 From an evolutionary perspective, it is not surprising that many of us felt so overwhelmed. Despite the common idea that modern family life consists of small, independent units, the reality is that we would often benefit from help from others to raise our offspring. For much of human history, extended families provided that help. In contemporary industrialised societies, where smaller family units are common, teachers, babysitters and other caregivers have allowed us to replicate that ancient support network.

This collaborative way of raising children makes us unique among great apes. Called "cooperative breeding", it is more similar to how seemingly more distant species like meerkats and even ants and bees live – and it has given us crucial evolutionary advantages.

Cooperatively breeding species live in large family groups where individuals work together to raise offspring. Perhaps surprisingly, other apes, such as chimpanzees, do not parent that way. Although humans and chimpanzees both live in complex social groups, comprising kin and non-relatives, a closer inspection reveals some stark differences. Chimp mothers raise their infants alone, with little or no assistance from anyone else, not even the father. The same goes for gorillas, orangutans and bonobos. What's more, female apes do not undergo a physiological menopause, meaning they remain fertile all their lives. As a result, it is quite common for a mother and a daughter to be raising their own offspring at the same time. This limits the potential for ape grandmothers to help with their grandchildren.

As a species, humans are spectacularly ill-equipped to deal with parenting in isolation 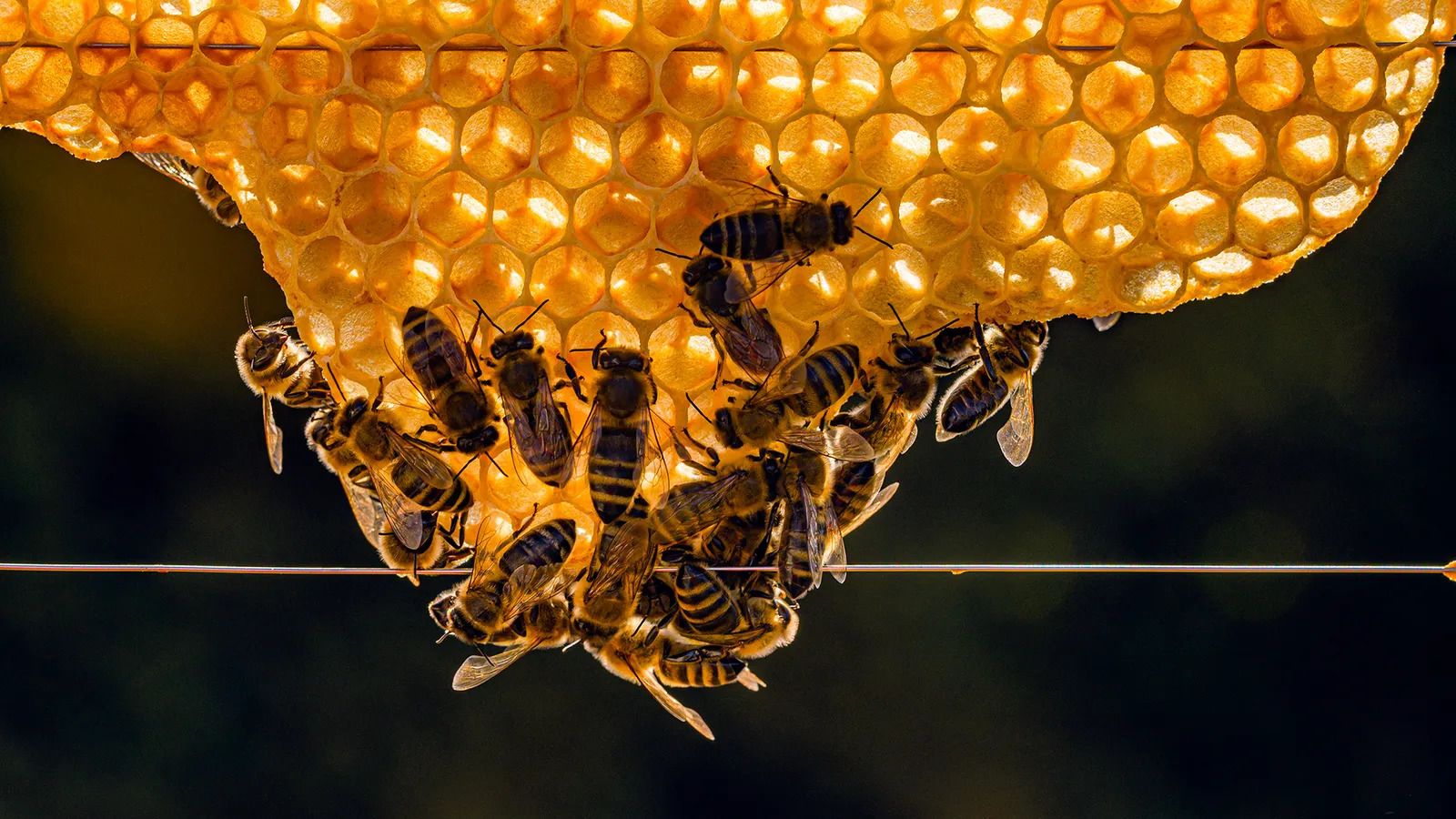 We are clearly different. For most of our time on Earth, humans have lived in extended family units, where mothers would have received assistance from many other family members. In many contemporary human societies, this is still the case. Human fathers are often involved in raising offspring, although the extent of paternal investment varies quite a bit across societies. Infants also receive input from a variety of other relatives, including older siblings, aunts and uncles, cousins and, of course, grandparents. Even small children can play a vital role in helping to sustain and protect younger ones. In such a setting, the burden of looking after children very rarely falls onto one person alone.

Abbey Page, a biological anthropologist who has worked extensively with the Agta, a hunter-gatherer society from the Philippines, says we are only beginning to understand the full extent of such traditional support networks. For example, among the Agta, children as young as four are often already productive members of the family.

"The contributions of children have often been overlooked," says Page. In the past, due to strict concepts of what constitutes work and play, researchers tended not to notice that a child could be playing around one moment and grabbing fruit from a bush the next. "Children are definitely subsidising themselves (in such hunter-gatherer societies)," she says.

Agta children also help by protecting their younger siblings from danger. Page recounts a time she was sitting in one of the Agta family huts with a four-year-old boy and his infant sister. All three were sat on the floor when a scorpion entered. Page admits she was flummoxed: "I was not helpful in the slightest." Fortunately, the young boy knew what to do: "He immediately jumped up, got a stick from the fire and bashed the scorpion, and then jumped up and down on it a few times." This simple act potentially saved his sister's life. 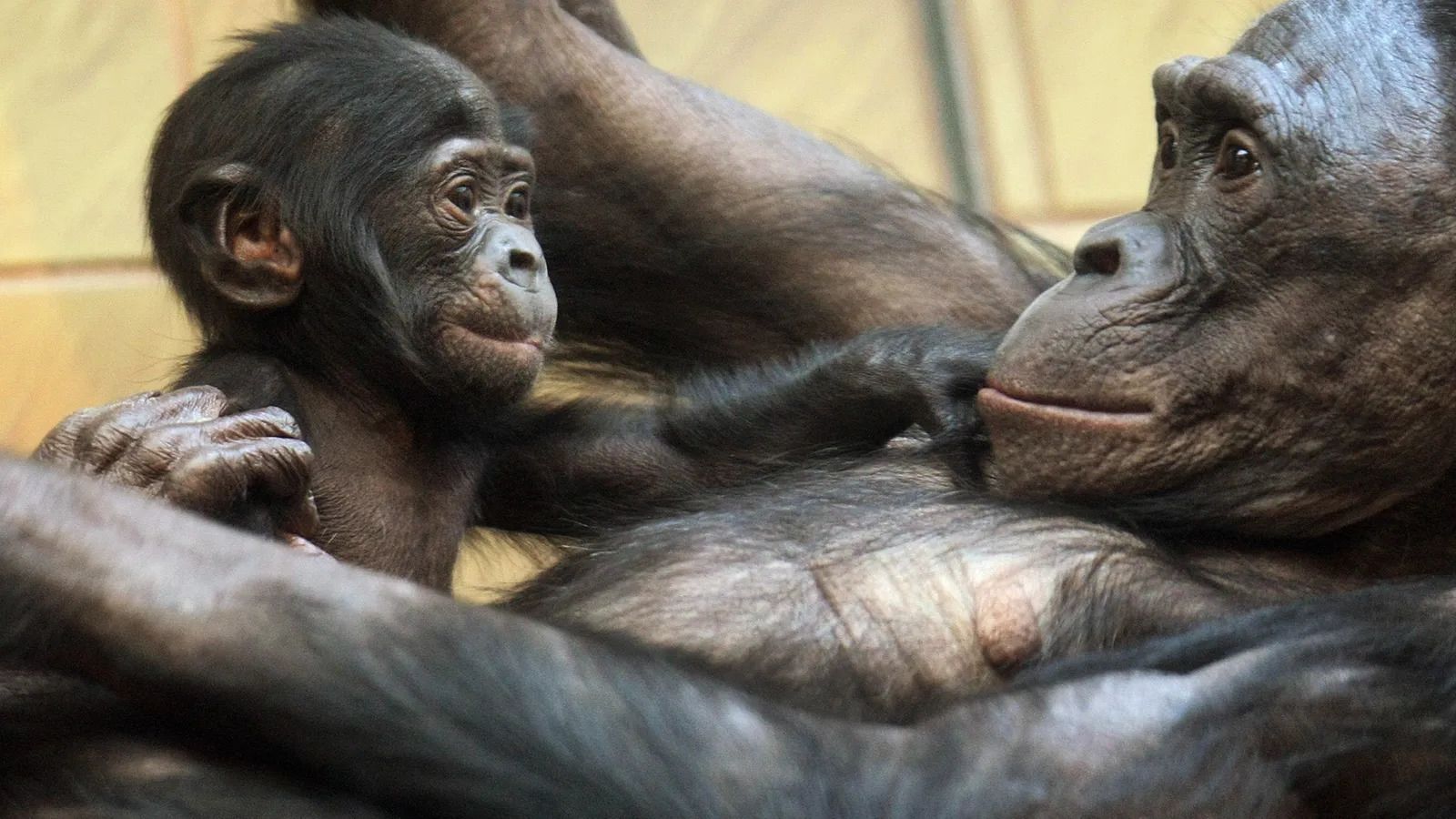 Bonobo mothers are solo parents, unlike humans, who have evolved in extended families

The experience prompted Page to reflect on what counts as meaningful childcare. In the West, childcare typically means that a responsible adult, often a parent, not only watches over a young child, but provides intensive engagement and stimulation. When parents are unable to achieve this, for example because they are busy working, they may feel guilty or inadequate. But Page's research uncovered many other ways children can be looked after and thrive, without that intense focus on the parents alone.

In fact, sibling care, with older offspring helping to raise their younger siblings, is a defining characteristic of cooperatively breeding species. Meerkats forage for food that can be shared with youngsters, and babysit younger pups at the burrow. They teach pups how to safely handle dangerous prey items. Females even produce milk to feed their younger siblings. Just like the child who saved his sister from the scorpion, some of the most important forms of care in these cooperative societies also involve protecting younger individuals: keeping them safe from predators and out of trouble. 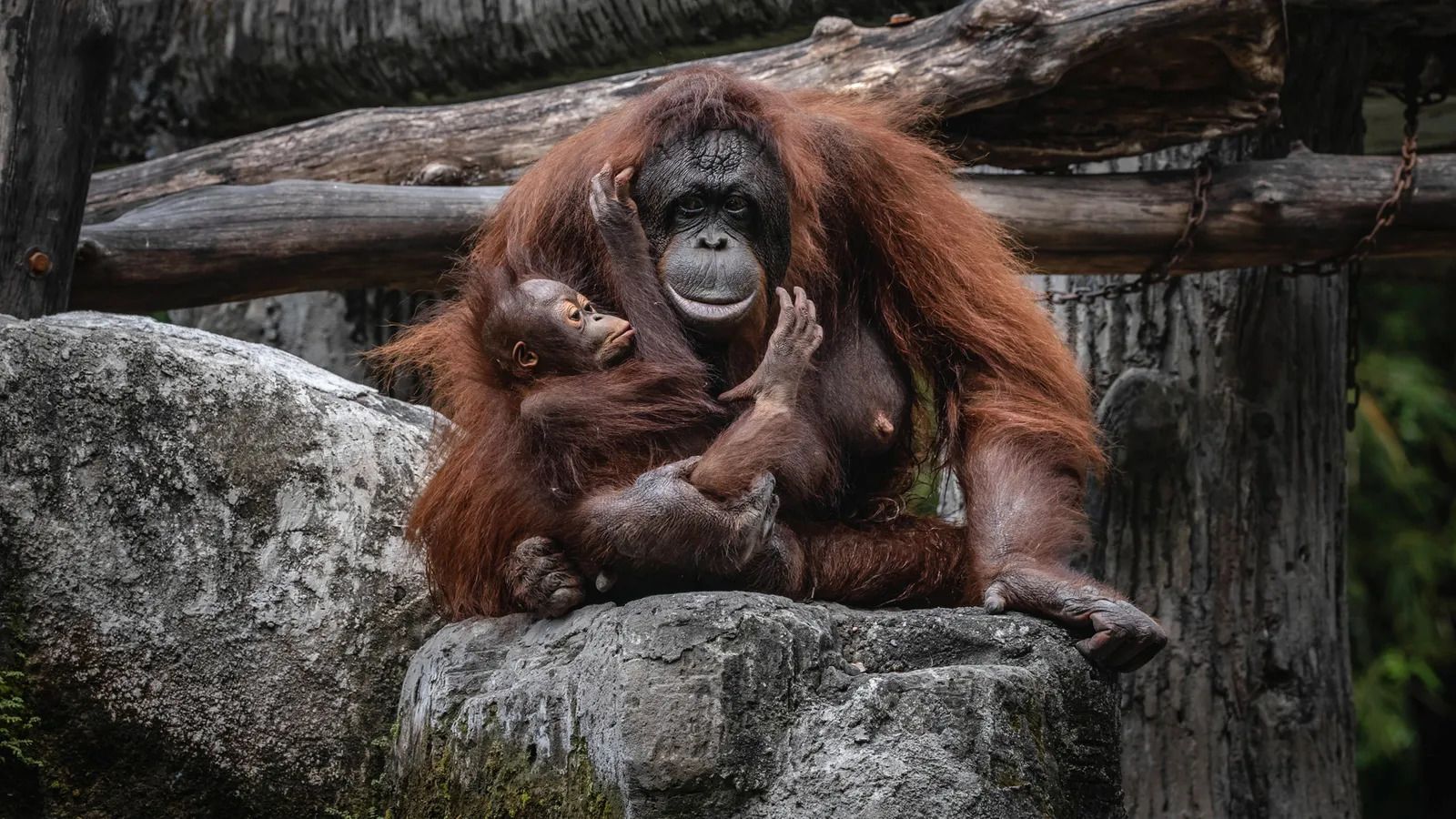 Orangutans are also closely related to us, but are more used to parenting alone

Cooperative breeding has a crucial advantage over more solitary forms of child-rearing: it can make a species more resilient, and likely evolved as a means to weather adversity.

Many cooperatively breeding species are found in the hottest, driest regions on the planet. Early humans also inhabited harsh regions where food would have been difficult to find, needing to be gathered, scavenged or killed. Collaboration was a pre-requisite for survival in a way that it isn't for contemporary great apes. Our ape cousins all inhabit relatively stable, benign environments – essentially giant salad bowls – where the food they need to sustain themselves and any dependent offspring is much easier to come by.

Humans were apparently the only apes who could survive in such difficult environments: great apes are absent from the fossil record in these regions.

Paradoxically, our cooperative tendency, which allowed us to survive and thrive for so long, may have made the current crisis much harder from a psychological and practical point of view.

During the lockdowns, we were cut off from our support networks: the grandparents, aunts and uncles, but also, the schools, nurseries and playgroups that all helped mimic our ancient human group structures. Not only that, but we were expected to fall back on our small family units as if this was an instinctive thing to do. For many of us, it felt near-impossible, and there was no real explanation for why it felt that way. After all, our Western notion of the family places so much emphasis on maternal care and so little on the contributions of other family members. The expectation was that mothers and fathers, or even mothers alone, would be amply sufficient as caregivers.

However, according to Rebecca Sear, a professor of evolutionary demography at the London School of Hygiene and Tropical Medicine, this idea of the self-sufficient nuclear family reflects the experiences and worldviews of Western researchers rather than historical reality. The idea of the nuclear family, sustained by a male breadwinner, became particularly entrenched during the post-war period, a time when "academia was full of rich, white, Western men who looked around at their own families and just thought that that was how it's always been", Sear says.

The term "nuclear family" only emerged in the 1920s. The family structure itself, which centres on two parents and a relatively small number of children, is older, and may be linked to the Industrial Revolution, as the shift from farming to manufacturing allowed for more independent lifestyles. An alternative explanation is that policies of the Western Church in the Middle Ages, which banned marriages among cousins and other extended family members, caused family units to shrink. But even though the nuclear family is such an ubiquitous concept in 20th Century Western research and popular culture, including countless novels, films and TV shows, Sear explains that it's actually rather anomalous, even in the West.

"Co-residence of just parents and children is relatively rare worldwide," says Sear. "There is a lot of variation in family structures worldwide, but what is common is that parents get help in raising offspring and that’s true even in the Western middle classes." 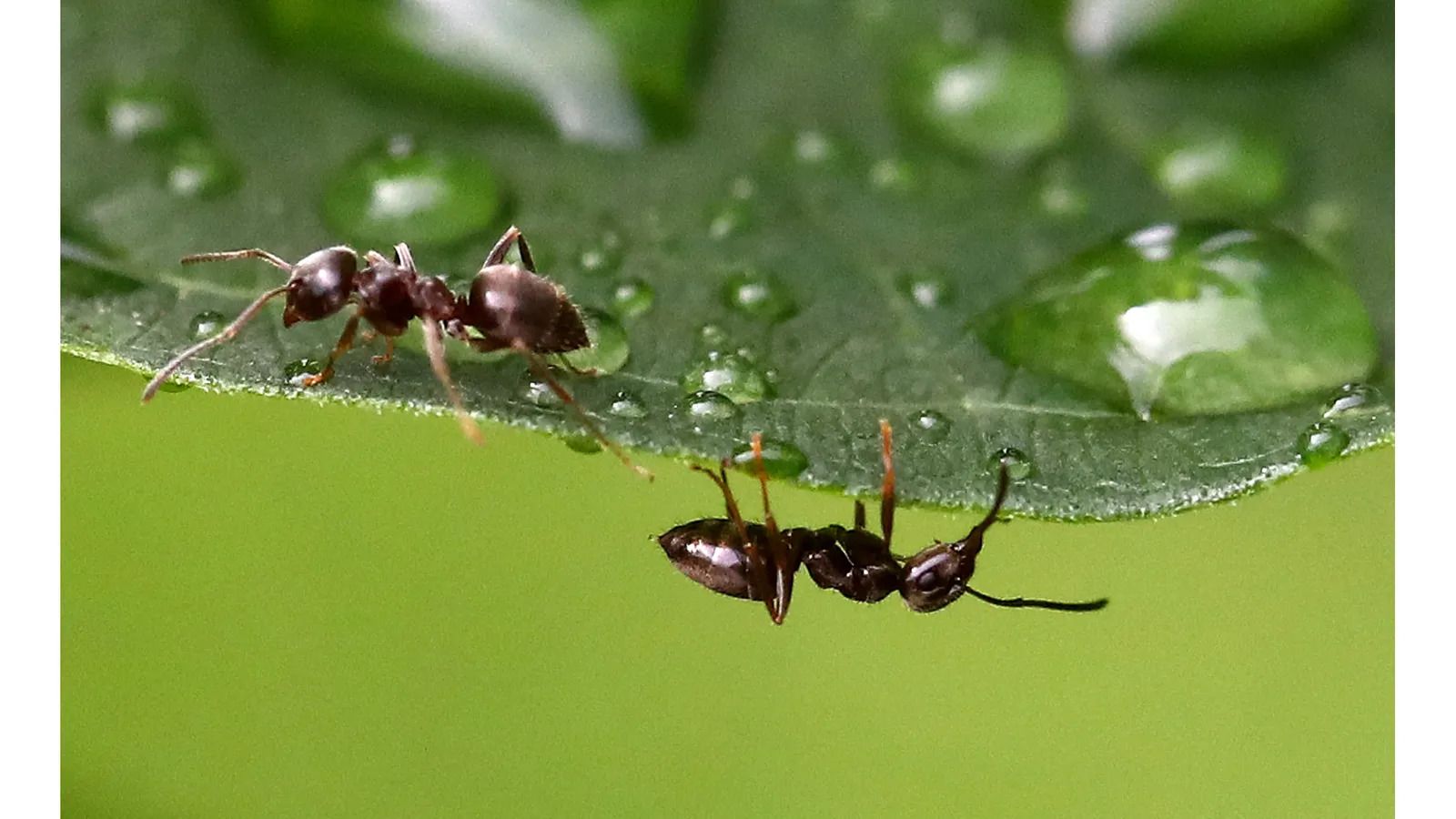 When it comes to our family structures, we have more in common with ants than with other great apes

The typical arrangement for humans is not a single pair raising their young in isolation, she explains. Instead, we usually need and receive help when it comes to raising children. Nor is the idea of women as mothers and homemakers as traditional as it is sometimes made out to be. In historical and contemporary subsistence societies, women play a significant role in producing for their families: women are breadwinners, too.

With this different perspective on the human family, perhaps our expectations of parenting during the pandemic would have been different. Instead of assuming that parents, and especially mums, should (and would) carry the burden, we might have acknowledged the crucial role of other family members and caregivers. With an understanding of how much we rely on one another to raise offspring, we might have gone easier on others – and ourselves – when we were struggling.

Expecting humans to parent like chimpanzees is a bit like isolating an ant from her colony: we aren’t necessarily cut out for it – and often it doesn’t go well. Admitting that we need others is not a sign of failure, but is the very thing that makes us human.