Early in January, China’s state news agency Xinhua posted a video reminding young Chinese men born in the year 2000 that they were eligible to get married. “Post 00s have reached legal marriage age,” it declared.

The hashtag swiftly popped up in the top-searched list of Weibo hot topics, but many read it as the government’s attempt to put pressure on them. “Who dares to get married these days? Don’t we need to make money?” one questioned. “Stop nagging me!” said another.

Under Chinese law, men can marry from 22 and women from 20. Young Chinese people’s mixed response to state media’s message came as the country faces what some analysts described as a “demographic timebomb”. Last week, China’s government reported its population growth rate had fallen to a 61-year low, with births barely outnumbering deaths in 2021, despite efforts to encourage Chinese couples to have babies in the last few years.

“Young Chinese’s attitude towards marriage poses a big threat to Beijing’s effort to alter the looming demographic crisis,” said Dr Ye Liu, a senior lecturer at King’s College London’s Lau China Institute. “Coupled with a higher level of education and economic betterment, this will become a bigger headache in the years to come.”

A growing number of young people across east Asian societies are delaying getting married as the region becomes more prosperous. Yet in urban China, this change has been especially swift, said Wang Feng, a sociology professor at the University of California, Irvine. Comparing Chinese census data in 1990 and 2015, Wang said that the share of never-married Chinese women in their late 20s had shot up by eight times in the span of 25 years.

Census data from the years 2000 and 2010 show that college-educated young Chinese between the ages of 25 and 29 are most likely to be single. And women in developed Chinese cities, in particular, have fewer ambitions to get married.

On social media and in daily life, the resistance to early marriage is strongly on display. In 2017, for example, a Shanghai-based chamber choir performance struck a chord with millions of young Chinese people facing the same dilemma across the country. The viral song Spring Festival Survival Guide – or What I Do Is For Your Own Good in English – told insisting Chinese parents: “My dear family, please just let me live my own life.”

Vicky Liu, who is from northern Tianjin and was born in 1997, is one of those young Chinese. She said as soon as she graduated with a master’s in England last year, her parents began to arrange blind dates for her. “But I am an adult woman. I want a career and a good circle of friends. I just don’t want to be tied into a family life too soon.” 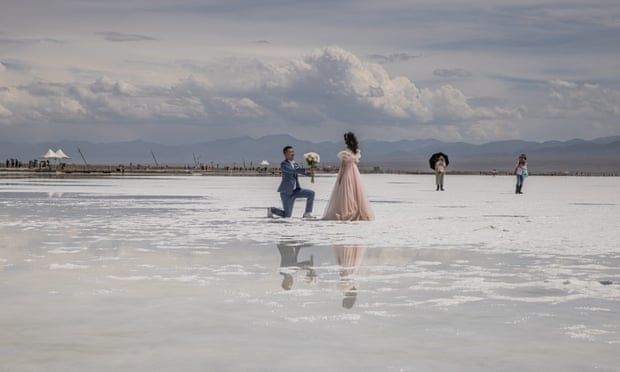 Younger Chinese generation couples want ‘to have it all – career and family as well as self-fulfilment’, says expert.

The attitude has alarmed the authorities further as the decline in population growth has become more evident in recent years. To reverse the trend, Beijing scrapped the decades-long one child policy in 2015, and last May it introduced a three-child policy. One economist, Ren Zeping, even suggested the government should print more money to fund a baby boom. Ren has been banned from posting on social media following this comment.

But Ye Liu, of Kings College London, said that these policies are “masculine” and they are “disconnected” from the reality facing China’s generation Z today. “What they want is a better career future, an opportunity to have it all – career and family as well as self-fulfilment. Without these, it’s hard to convince them to have babies first,” she said.

This is particularly the case with young Chinese women, she added. “Gen Z Chinese women have more education than previous generations. They are more likely to prioritise their career rather than get married after a university education.”

Wang agreed and said that in reality, Chinese women were “severely under represented” in political and economic power. “China has a long way to go to create a more gender equitable society. But the difficulty here is that it is not achievable simply via the state issuing policy documents.”

Yi Fuxian, of the University of Wisconsin-Madison, also the author of Big Country with an Empty Nest, said there were tangible measures the government could take to assuage the situation. “For example, job opportunities for young Chinese and help with the cost of living – in particular, the cost of property. The government should also make it easier for young couples to raise children.”

For Vicky Liu, there is more to it. “[My parents’] logic is that as a woman I don’t have too long to find an ideal husband. For them, I have to get married, be pregnant and become a mother as soon as possible. Chinese parents simply won’t accept their daughters remaining single for too long.”