The 30-year-old on the toll of not living as his ‘true self’ before coming out, switching to Team GB and unease at China hosting the Winter Olympics

‘I think of that person, or look at photos of that person, and it feels like a lifetime ago,” Gus Kenworthy says as he remembers winning a silver medal for the United States as a freestyle skier at his first Winter Olympics in Sochi in 2014. So much has changed since then. He is now about to compete for Great Britain, the country of his birth, in his third and final Olympics in Beijing and Kenworthy will ski as a gay man, an LGBTQ+ activist and an actor.

The most important facet of his transition is that, as Kenworthy says: “I’m just much happier now than I was back then when I wasn’t living my life authentically. I wasn’t being my true self and it definitely took a toll.”

Kenworthy will soon talk eloquently of his misgivings about competing in China, where there is disregard for some basic human rights, but I ask him first about Sochi. He had not come out then but was he distressed by homophobia in Russia? “It ate away at me. In the buildup to the Games we did lots of media training about the anti-LGBTQ legislation they had in place that foreigners wouldn’t be exempt from. We were told not to talk about it. You couldn’t paint your nails or wear anything rainbow. I remember being really upset – but I was still in the closet and I was scared.”

Even before he returned home in American glory, Kenworthy felt distinctly uncomfortable. “In the media aftermath we had so much emphasis on our lives as young men because it was a US sweep [in the slopestyle] and the other two guys were single. I had a boyfriend but we were deeply in the closet and so to all intents and purposes I was also single. We competed on February 13 and on Valentine’s Day we were on the Today show talking about our celebrity crushes, who we would want as our Valentine and our favourite kind of girl. I just lied. I went on this whole media tour where I felt I was lying the entire time. I was very depressed and absolutely hated myself.”

Did tabloid speculation that he was dating Miley Cyrus offer fleeting relief from such questions or simply deepen his unease? “Both. I was trying to keep up this facade I was straight. It sounds grimy but there’s also a culture around those events where you’re pulling girls at parties. I was sleeping with women and really trying so hard to fit this other narrative. But I cried after sleeping with women sometimes. It certainly was never the same after I slept with a man.” 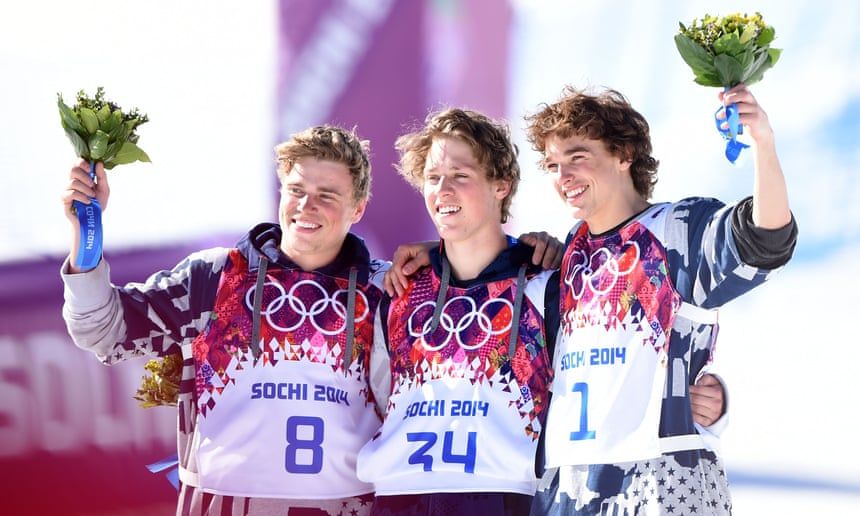 Kenworthy, Joss Christensen (centre) and Nicholas Goepper celebrate their medal wins for the United States in the men’s ski slopestyle at the Sochi 2014 Winter Olympic Games.

“I only told Michael because my first boyfriend and I were still in the closet and trying to figure ourselves out. He worked on the snowboard tour and we were inseparable. Nobody knew that we were together but we started to get grief. If one of us was anywhere without the other person, people would go: ‘Where’s your boyfriend?’ They were joking. But there was one skier, someone I had really looked up to, who was really harassing, He’d be like: ‘Hey, faggot, where’s your boyfriend?’ Super-vulgar, super-crass and really hurtful.

He and the other skier were both associated with the same company and Kenworthy told his agent to sever their link. He remembers now that “Michael said: ‘You have a contract.’ I was like: ‘I don’t care. Get me out of it.’ I explained why and he was like: ‘He’s joking, it’s locker room talk, just brush it off.’ I broke down crying and told him the truth. Michael was wonderful and said: ‘I’ll get you out of the contract and I will keep your secret until you are ready to tell somebody.’ Michael’s just a very sweet straight guy and like a father figure to me now.”

The same damaging terminology echoed around him. “I don’t think people were trying to be malicious but if a ski course was bad they’d say: ‘This course is so gay.’ It would be multiple times a day. ‘This is gay, that’s gay, don’t be a faggot.’ That language takes a toll on you.”

Before he came out in 2015, Kenworthy felt so unhappy he came close to retiring. But a fellow skier, Justin Dorey, who is now his coach, changed his attitude. “My relationship had ended,” Kenworthy says, “and I remember feeling pretty alone. I was gay and I wanted to enjoy that part of myself but I felt I couldn’t do that because of my sport. I was not skiing well and so I thought: ‘It’s because I’m gay and so I want to quit.’

“My agent and I decided I would finish the season and then I was going to come out. Once I made that decision I went on a winning spree and climbed back to being the No 1 ranked skier. That was important because I felt like I was going to get a lot of shit. But Justin’s reaction was one of the biggest things that got me wanting to come out publicly. He actually asked me at the X Games in 2015: ‘Are you gay?’ I remember freezing and then saying: ‘Yeah, I am.’ His reaction was like: ‘No way? That’s fucking cool!’ I was like ‘What?’”

Kenworthy laughs. “Justin kept saying: ‘That’s so cool. You should tell people.’ He said that the X Games are meant to be counterculture and going against the grain. But he was like: ‘You actually go against the grain.’ I had never thought of it like that and suddenly I told a few friends and every time I felt the weight being lifted.” The support Kenworthy received after coming out publicly in an interview with ESPN transformed his life: “I was prepared to lose a lot coming out. In the end I lost nothing and gained so much.”

He noticed how people began to change their behaviour around him. “There were times in competition where I would hear someone say: ‘Oh my God, the judges are being so g-.’ They would catch themselves and say ‘bad’ instead. I would be like: ‘Thank you for catching that, for making an effort.’”

Kenworthy was disappointed not to win a medal at the 2018 Winter Olympics in Pyeongchang but a kiss he shared with his boyfriend Matthew Wilkas before the slopestyle qualifying went viral after it was captured by NBC’s cameras. Kenworthy was the first gay athlete to kiss his partner on network television. “I was a medal favourite but I couldn’t put it together on the day. But my legacy in Pyeongchang was that kiss. It amplified my story and put an exclamation mark on it. I didn’t even know we were being filmed so to have it broadcast to the world felt amazing.” 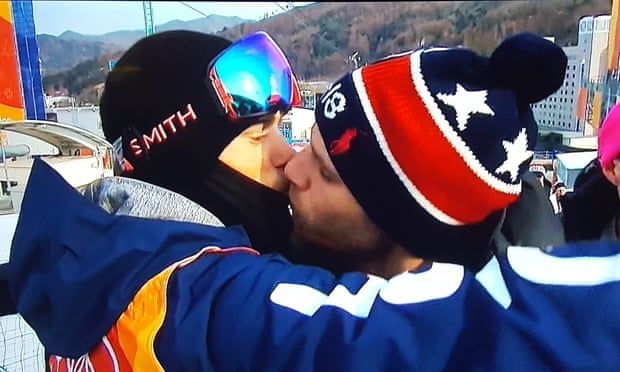 The 30-year-old was born in Chelmsford to an English mother and an American father and, when he was two, the family moved to Colorado. “I was very confident I could still make the US team,” he says of his switch to represent Britain in Beijing. “But qualification is really rigorous and at the last minute, and there’s lots of risk if you’re sick or hurt before qualifying. That’s your entire Olympic experience gone, and there are so many people fighting for those spots. So part of it was strategic.

“I knew I could have a different approach to the Games and have time to focus on the actual run, and the tricks I want to do, instead of fighting tooth and nail for my spot. And because it is my last Olympics, my swansong, I thought it would be a sweet, poetic way to end, waving the union jack for my mom at the bottom of the run. But c’est la vie. Covid means she’ll be watching on television.”

In terms of China hosting the Games, Kenworthy says: “The IOC has the power to really make a positive difference and if you’re a country with horrible human rights issues and bad stances on LGBTQ issues, you shouldn’t be allowed that giant honour and prestige of hosting the Olympics. And in countries where homosexuality is punishable by death or jail, you shouldn’t be allowed to compete in the Olympics at all.” 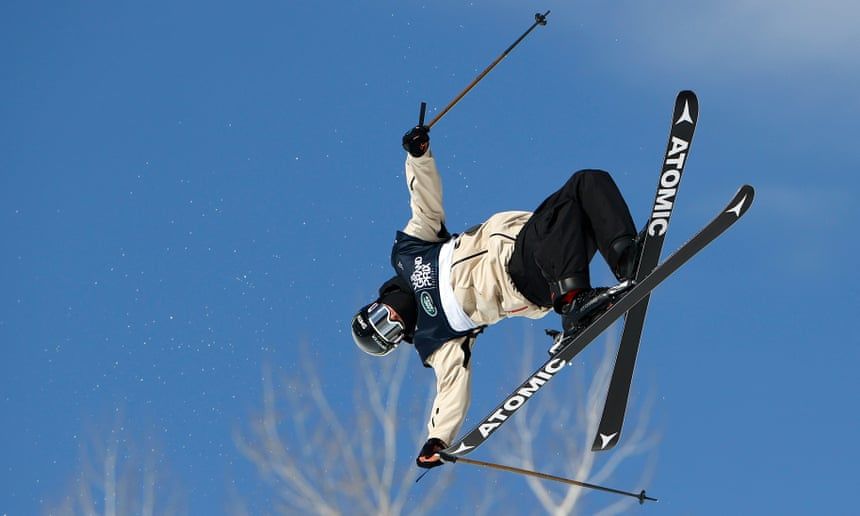 Gus Kenworthy in action in the men’s freeski halfpipe at the 2021 Grand Prix World Cup in Aspen, Colorado.

Does he support the US and UK governments’ diplomatic boycott of the Beijing Games? “Yes, I do but I don’t think it does anything. It sends a message but it doesn’t create any actual change. Real, systemic change happens at the very top with the IOC. This should be in terms of which countries are allowed to host and which countries are allowed to participate, and certain criteria should be met in order to be eligible for either of those.

“Adam Rippon and I were the first two openly gay men to go to the Winter Olympics for Team USA, which is insane. But last year I was in Tokyo doing correspondent work for NBC and one of our stories was the fact that there was more LGBTQ representation than in any other Olympic Games. It was the first time that there were trans and non-binary and gay and lesbian athletes. That felt like such a milestone.”

While working at the summer Olympics, Kenworthy saw his friend Tom Daley. “Tom was a huge inspiration when I was coming out. I already followed him as an athlete and thought he was super-talented, smart and articulate. I got so much comfort from his coming out story. We met years ago in Los Angeles and have stayed in touch. He continues to be an inspiration. I was there, in person, when he won gold in Tokyo. There was almost no one there and so it was one of the most surreal experiences of my life to be standing poolside watching [Daley and Matty Lee] get gold. I burst into tears and then I got to interview Tom.”

Even more than Daley, who has become a significant cultural figure in Britain, Kenworthy transcends sport in the US. The television producer Ryan Murphy handpicked him to play a starring role in American Horror Story and Kenworthy tells me that, in terms of acting, “I put myself on tape for an audition yesterday in my hotel room. My phone was stacked up on a pile of books, filming it. I haven’t even sent it yet, but I think it went pretty well.”

Whether he ends up in television or the movies, politics or entertainment, Kenworthy is likely to build on his sporting success and personal courage to carve out an even more layered identity. And so, when I ask him to sum up his mood as a proudly gay athlete about to enter his final Winter Olympics for a new country, Kenworthy pauses. “If I was going to distil it in just one word it would be ‘grateful.’ I feel very grateful for everything I’ve been able to do and become.”