Berlusconi, 85, seemingly undeterred by health woes, sex scandals and advanced age, posted a photo on Facebook in which he is gazing into the eyes of his 32-year-old lover Marta Fascina.

Former Italian prime minister Silvio Berlusconi has flaunted his relationship with his girlfriend - 53 years his junior - on social media in one final charm offensive for the Italian presidency.

Berlusconi, 85, seemingly undeterred by health woes, sex scandals and advanced age, posted a photo on Facebook in which he is gazing into the eyes of his 32-year-old lover Marta Fascina, an MP in his Forza Italia party.

Fascina is Berlusconi's latest romantic conquest after he broke off his previous relationship with Francesca Pascale in 2020, who at the ripe age of 34 was simply too old for him.

The former prime minister's overt affection on social media is said to be part of a presidential campaign in which Berlusconi has already set about harassing parliamentarians to get them on side like 'a squirrel collecting nuts'.

Italy will choose a new head of state early next year, and with no official candidates yet to be announced, Berlusconi has launched the so-called 'Operation Squirrel' in an attempt to overcome a string of scandals and become president. 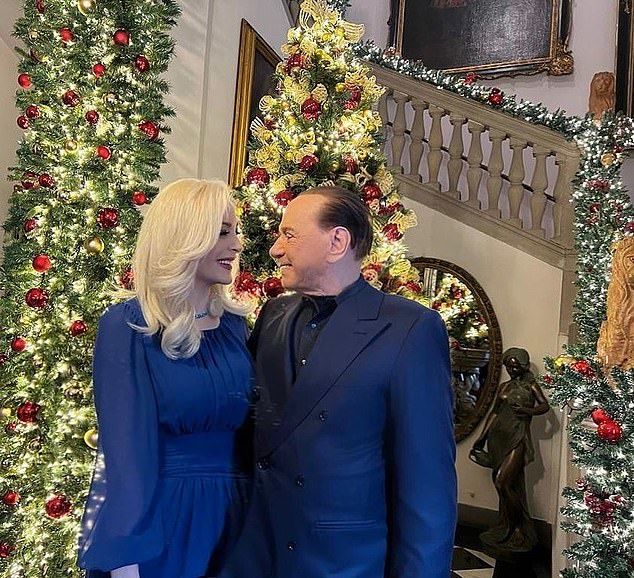 In this image posted on Facebook, 85-year-old former Italian prime minister Silvio Berlusconi (R) gazes into the eyes of 32-year-old Marta Fascina, an MP in his Forza Italia party, wishing her a happy birthday 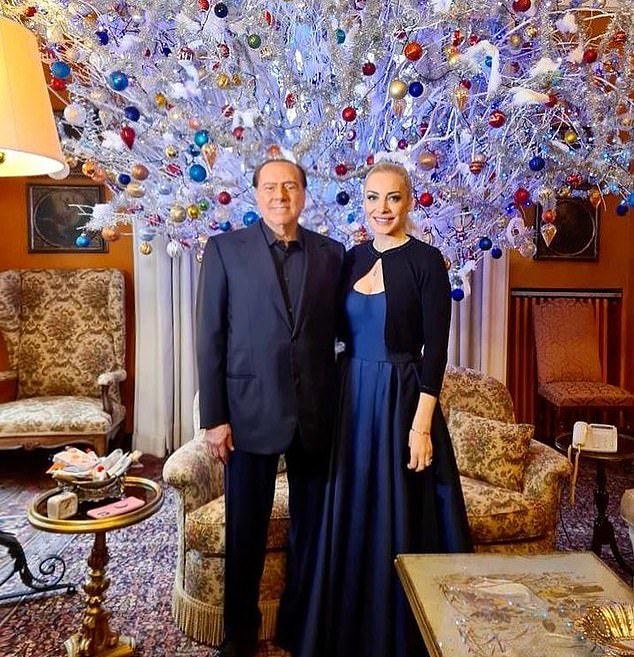 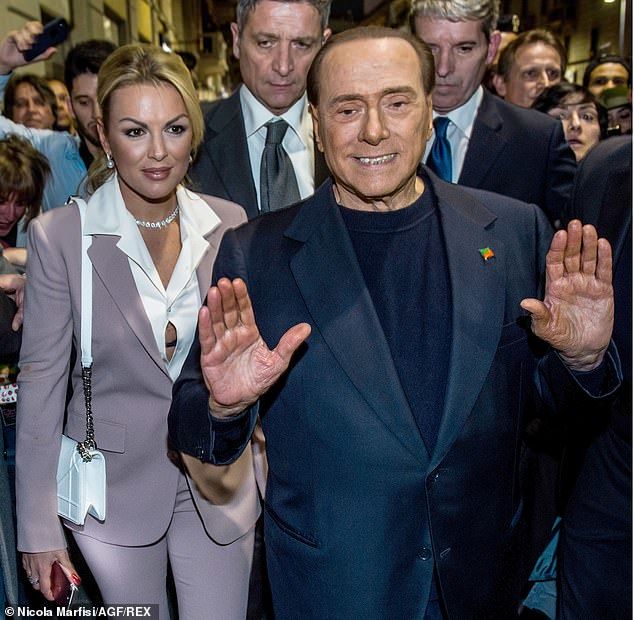 Fascina is Berlusconi's latest romantic conquest after he broke off his previous relationship with Francesca Pascale (left) in 2020, who at the ripe age of 34 was simply too old for him 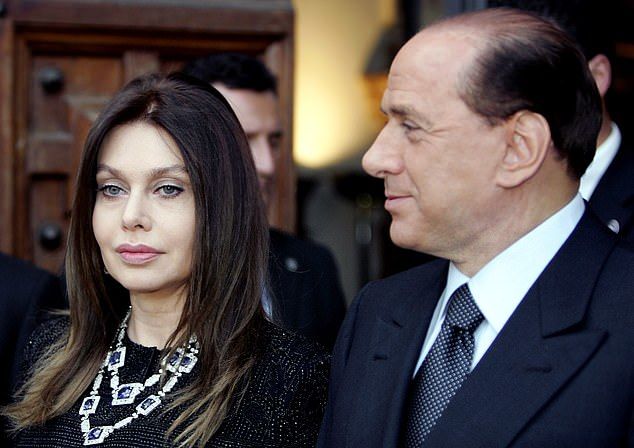 Berlusconi's second wife, Veronica Lario (L), divorced the scandal-ridden media mogul in 2010 after he was caught on multiple occasions sniffing around younger women

There are substantial obstacles lying in Berlusconi's path to the presidency, yet he is promoting himself with the gusto that helped him win three parliamentary elections and become Italy's longest-serving post-war premier.

'I've met him twice in the last two weeks and he was totally fired up,' said a lawmaker from Berlusconi's Forza Italia party, who asked not to be named.

'He is very persuasive; there are many MPs who have switched party repeatedly who might listen to him and there are reports of paintings being given as gifts,' the political commentator Antonio Polito said.

But the billionaire media mogul is a highly controversial figure.

Though Berlusconi's penchant for younger girlfriends is evident, the 85-year-old has been the subject of several sex scandals with prostitutes, and is still on trial for bribing witnesses in an underage prostitution case.

The former PM was previously convicted of paying £6 million to underage Moroccan prostitute Karima El Mahroug, also known as 'Ruby the heart-stealer', for sexual services between February and May 2010, but was later found not guilty on appeal.

El Mahroug was reportedly an attendee of one of Berlusconi's many 'bunga bunga' sex parties held at his private villa. 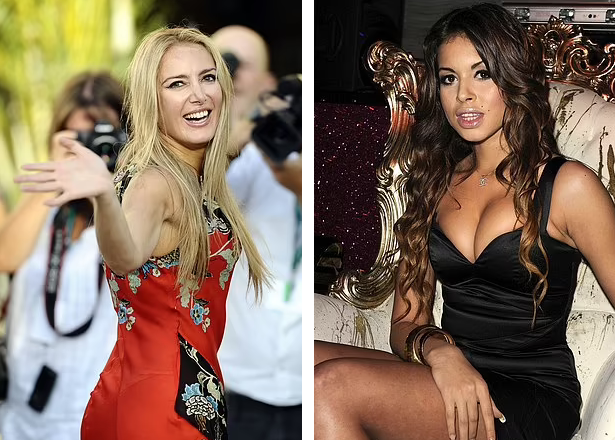 Though Berlusconi's penchant for younger girlfriends is evident, the 85-year-old has been the subject of several sex scandals with prostitutes, and is still on trial for bribing witnesses in an underage prostitution case (left: Italian escort Patrizia D'Addario. Right: Moroccan prostitute Karima El Mahroug)

Besides his reputation for 'bunga bunga' parties, Berlusconi was temporarily barred from public office after a conviction for tax fraud in 2013, and has been accused of several cases of embezzlement.

Analysts believe such a divisive personality will find it hard to muster the broad support needed to elect a president, but Berlusconi has proved nothing if not persistent - both in his romantic conquests and in his drive to overcome adversity.

Aside from his miraculous return to public office after numerous scandals, the media mogul has also battled a string of health issues in the past two decades.

In late 2006 he was admitted to hospital with a minor heart problem after fainting, and underwent heart surgery in a US hospital in January 2007.

He later had major heart surgery in 2016 and has also survived prostate cancer, which he revealed in 2000 after having endured the disease for three years.

At the time he described his cancer ordeal as 'a nightmare lasting months', but said his battle with coronavirus last September had been the 'most dangerous challenge' of his life. 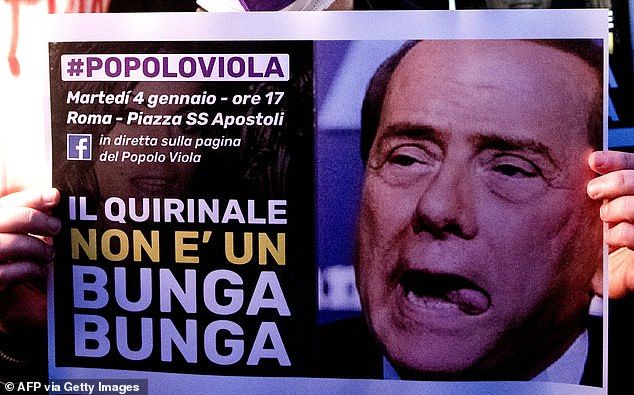 A man holds a poster depicting former Italian premier and billionaire media tycoon Silvio Berlusconi and reading 'The Quirinal is not a Bunga Bunga'. The Quirinal Palace is a grand building set on one of Rome's hillsides and is the official residence of Italy's president 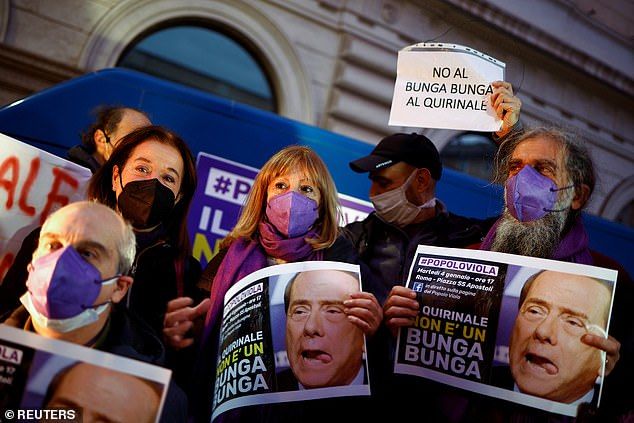 Though he has not yet officially announced his presidential candidacy, there is already outrage in Italy at the prospect of the disgraced, scandal-ridden former PM becoming head of state (pictured: a protest against Berlusconi's candidacy to the presidency of the Italian republic in Rome on January 4, 2022)

Yet despite all of the above, Berlusconi is ploughing ahead with his unofficial campaigning, presenting himself as an experienced elder statesman of European politics.

Candidates for president do not usually declare themselves in advance of the election in parliament. However, Berlusconi's name has been put forward repeatedly in the media, and he has not tried to dampen speculation that he wants the job.

Asked about his presidential prospects at a conference in October, he said, referring to himself in the third person: 'I think Silvio Berlusconi can be useful to the country... I won't back down and I'll do what my country needs.'

He will encounter stiff resistance - some Italians have already taken to the streets of Rome to protest his potential candidacy, holding placards which read 'The Quirinal (Italy's presidential palace) is not a bunga bunga'.

If he were to become president, he would be the first to lead office while on trial. 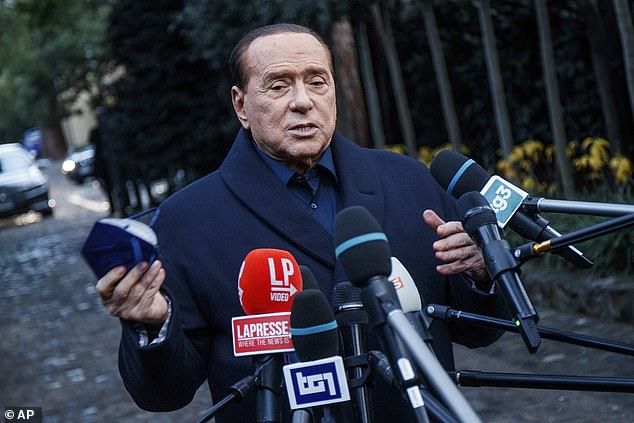 Gianfranco Rotondi, a veteran Forza Italia MP and a former minister under Berlusconi's last government said his former boss has a '50-50 chance to make it' in voting which starts around January 20.

Lorenzo Castellani, a political historian at Rome's Luiss university, said he predicted Berlusconi's attempt to fade, but expected him to be 'one of the kingmakers' in the presidential race.

The frontrunner in January's elections is currently Mario Draghi, the current prime minister, while sitting president Sergio Mattarella has also been mentioned as a credible option, despite saying he wants to retire.

Italian presidents are elected by approximately 1,000 national and regional lawmakers in a secret ballot.