"I am ashamed of what l am doing, but what choice do l have?" says Neda, a divorcee in Tehran.

By day she works as a hairdresser, but by night she works a second job as a prostitute, feeling forced into selling her body for sex just to make ends meet.

"I live in a country where women are not respected, the economy is crushing, and the price of everything is going up almost every day," she continues. "I am a single mum. I must take care of my son. Prostitution pays well, and now l am planning to buy a small house in downtown. This is the sad reality of my life. I am literally selling my soul."

In 2012, Iran announced a national programme to tackle prostitution. However, according to unofficial reports by non-governmental organisations (NGO) and researchers, the number of people working in the sex industry has only gone up.

Iran's conservative religious establishment has officially long denied the existence of sex workers in the country. Instead, authorities allude to prostitution there as a Western plot designed to corrupt youth, or blame women for falling foul of unscrupulous men.

Unofficial data also suggests Iran's sex workers are getting younger. Statistics from various NGOs suggest that in 2016 girls as young as 12 were involved in prostitution.

Aftab Society, an NGO dedicated to treatment of drug-addicted women in Iran, said in 2019 that there could be almost 10,000 female sex workers in the capital, roughly 35% of whom were married.

According to Amir Mahmoud Harrichi, a professor of social welfare at Tehran University, the figure for the number of female sex workers in Tehran could be twice as high.

Given the comparative lack of job opportunities for women in Iran and absence of gender equality, many women living below poverty line have been forced to exchange sex for money. However, the work comes with great risks.

"Men know that prostitution is illegal in Iran and incurs grave punishment for women, so they use it to their advantage," says one part-time sex worker, Mahnaz, a student at a university in Tehran

"It has happened to me on various occasions that l had sex with someone but he didn't pay me and I couldn't go to the authorities."

Mahnaz says the cost of living in Tehran is very high and that doing other jobs will not pay her bills.

Following the Islamic Revolution in Iran in 1979, a number of sex workers were executed by the new regime and brothels were closed down. In an effort to legitimise using women for sex, the practice of what is known as zawaj al-mutaa or "pleasure marriage" - one that is subject to a contract that specifies its length and the amount of compensation to the temporary wife - became more prevalent.

Under Iran's Shia Islamic system, a mutaa marriage is allowed, and is not considered as an act of prostitution. The practice is widespread in the holy cities of Mashhad and Qom, which are visited by Shia pilgrims from all over the world. Videos on social media show Iraqi men seeking sex in Mashhad, where officials argue that they are just engaging in temporary marriages.

Now, there are countless online services offering a mutaa marriage in Iran, including on Telegram and WhatsApp, with such groups claiming they have governmental approval. 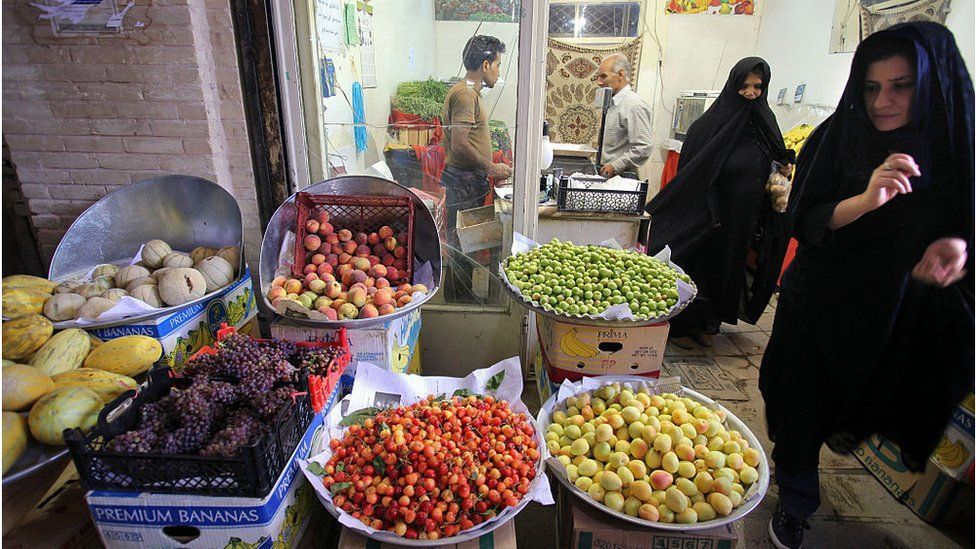 The cost of living has soared in Iran, making it difficult for some to afford basic supplies

One driving force behind the soaring cost of living that underlies the growth in prostitution has been the economic sanctions imposed by the US over Iran's nuclear programme. Since last year, inflation in Iran has gone up 48.6%. Unemployment has also risen and for many who do have jobs, they aren't paid well.

Against this backdrop, there has also been an increase in the number of men aged between 20 and 35 who have sex with women in exchange for getting paid. The phenomenon of male sex worker is spreading amongst major cities in Iran.

One such person is Kamyar, a 28-year-old supermarket cashier, was living with his parents until last year and could not pay for his expenses without the help of his father. He can now afford to rent an apartment in central Tehran and is hoping to move abroad one day.

"I find my customers through social media accounts," he says. "These women are usually in their 30s and 40s. I once had a client who was 54. They treat me well, pay good money and always sleep the night at their place. And through word of mouth, I am getting lots of clients."

Kamyar is a trained engineer but he sees no future for himself in a field that he always loved.

"I always wanted to become an engineer. But there is no job out there for me," he says.

"I loved a girl, but we couldn't marry because I had no proper job. I am not proud of what I'm doing now. Sleeping with strangers for money was not on my wildest dream growing up. Of course, I feel ashamed, but it pays the bills. I'm in a country where misery is the only thing I imagine for my future."