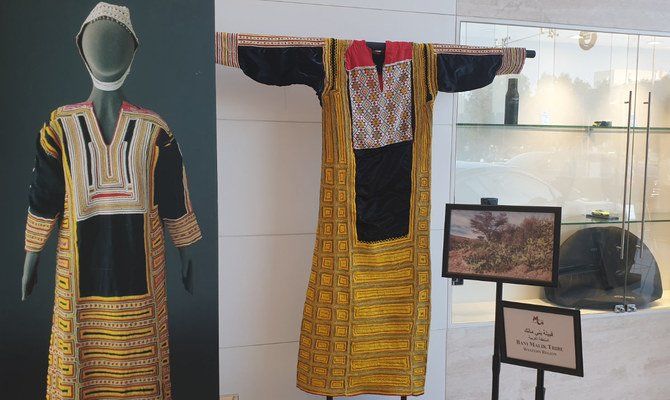 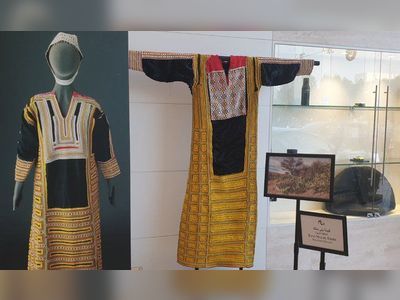 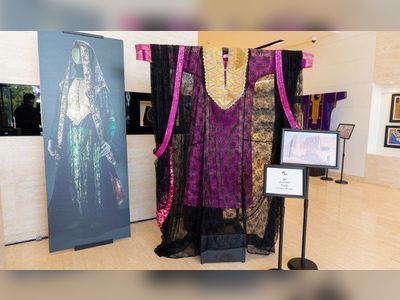 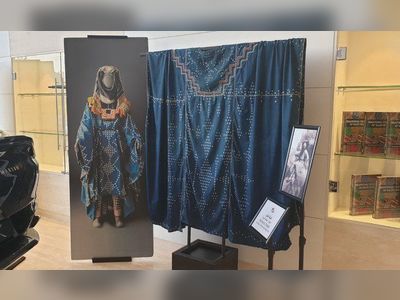 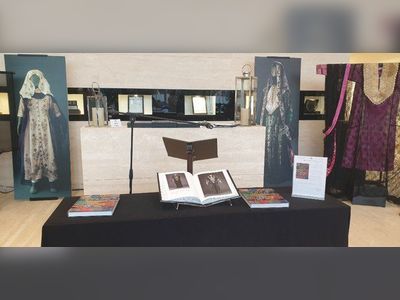 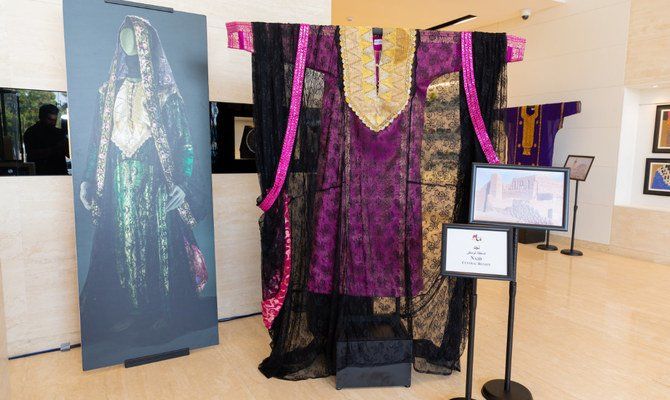 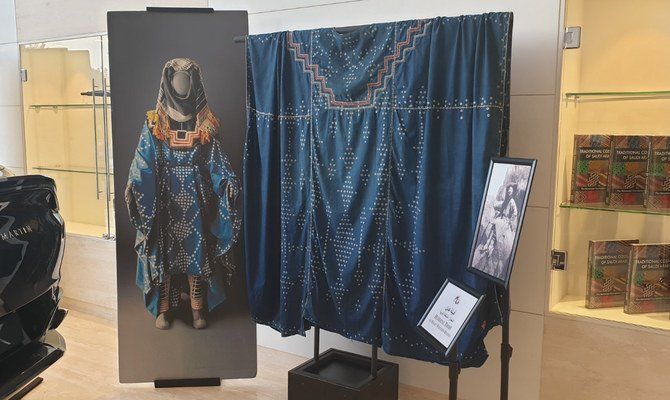 A book entitled “Traditional Costumes of Saudi Arabia” made its debut on Monday at a ceremony in Jeddah with the attendance of the city’s Mayor Saleh Al-Turki, academics, artists, and others interested in the Kingdom’s cultural history.

Born out of 14 years of collaboration with the Mansoojat Foundation, this book pays homage to Saudi Arabia’s rich textile heritage.

From the Labah Sadr of the Bal Harith tribe (a silver necklace decorated with colored glass beads, often recycled from old car lights) to the resplendent jasmine headdresses worn by people from Jazan, “Traditional Costumes of Saudi Arabia” captures the stunning scope of traditional accessories and garb.

The Mansoojat Foundation is a UK-registered charity founded by a group of Saudi women who share an interest in the traditional attire and heritage of Saudi Arabia.

To make this book possible, Mansoojat collected approximately 1,400 clothing items, many of which required extensive restoration. 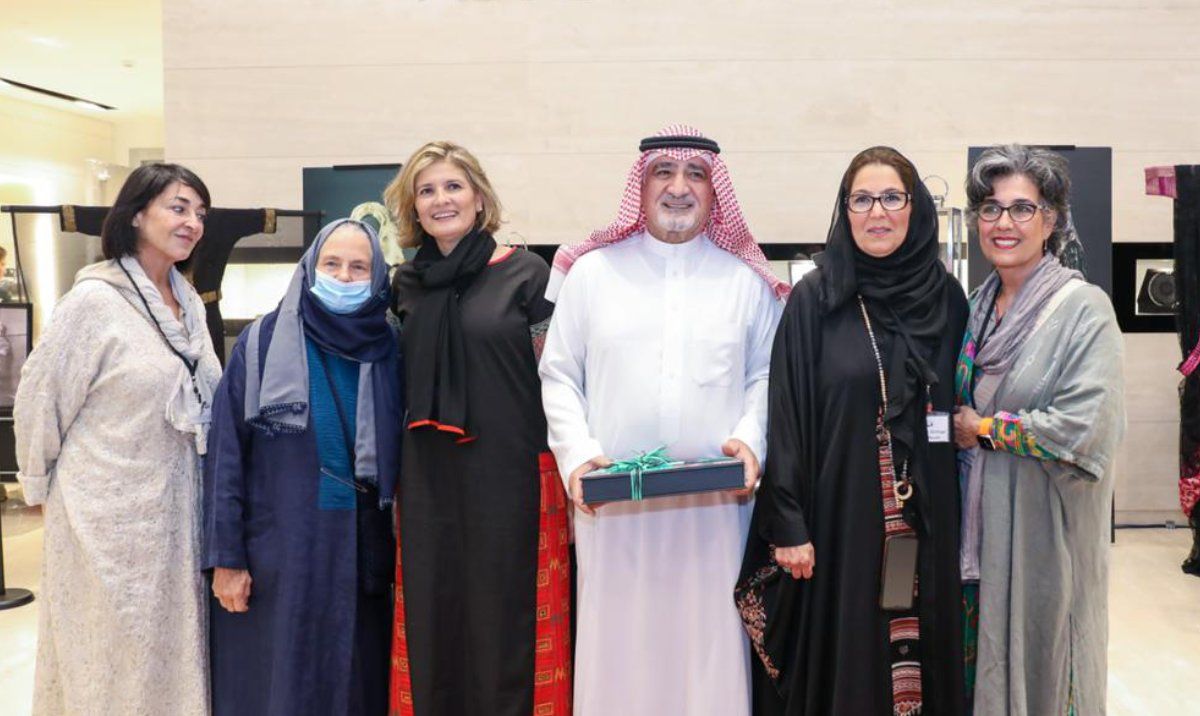 Mayor of Jeddah posing with members of Mansoojat Foundations.

“We intend to showcase the costumes of some of Saudi Arabia’s regions, to understand and learn about the different geographical regions, the different tribes and cultures, the layers and intricacies of society, as well as the vibrant and colorful textiles and crafts that are part of Saudi Arabia’s heritage,” said Lamia Al-Ghalib, a member of the Mansoojat Foundation.

“Organizing the book into logical chapters has been a challenge. In some instances, costumes had to be grouped by tribe and in others by geographical location,” she added.

“Classifying and documenting the costumes took us years of studies, research, field trips, and consultations with both academics and local experts. We succeeded in working with specialists for each region because they were obviously familiar with their history, cultures and traditions.”

The book, Al-Ghalib explained, features images of models wearing the outfits in combination with other accessories, which “gives a real-life representation of what these items would have looked like when used and helps bring (them) to life.”

Preserving costumes that are no longer worn and celebrating those that remain at the heart of communities, the book provides valuable insight into the history of Saudi Arabia through the voices of its oldest inhabitants.

The mayor of Jeddah expressed his admiration for the book, its informative contents, and the outstanding work of those who helped realize it.

Meanwhile, Ali Hussein Alireza, managing director of Aston Martin Saudi Arabia, where the ceremony was held, also expressed his happiness in hosting the official launch of the book, telling Arab News that it was vital to preserve the Kingdom’s history.

“Historical preservation is extremely important to Saudi Arabia, and I personally know the efforts these ladies went through to complete this great project,” he said.

“I am so proud of the women involved in writing this book because of the work and dedication that have been put into collecting, restoring, researching, and documenting to keep the old customs of Saudi Arabia alive for new generations,” he added.

The book, which is divided into 20 chapters according to region or tribe, was edited by Al-Ghalib, Alireza, and Richard Wilding.

According to Al-Ghalib, Mansoojat’s mission is to preserve and revive the traditional attire, textiles and embroidery of the Kingdom, to promote and conduct academic research on the history and culture of the region, and to raise public awareness of this unique heritage.

The book is not only a showcase for the Mansoojat Foundation but a window into the culture and society of Saudi Arabia.