Salma al-Shehab, a Leeds University student, was charged with following and retweeting dissidents and activists

A Saudi student at Leeds University who had returned home to the kingdom for a holiday has been sentenced to 34 years in prison for having a Twitter account and for following and retweeting dissidents and activists.

The sentencing by Saudi’s special terrorist court was handed down weeks after the US president Joe Biden’s visit to Saudi Arabia, which human rights activists had warned could embolden the kingdom to escalate its crackdown on dissidents and other pro-democracy activists.

The case also marks the latest example of how the crown prince Mohammed bin Salman has targeted Twitter users in his campaign of repression, while simultaneously controlling a major indirect stake in the US social media company through Saudi’s sovereign wealth fund, the Public Investment Fund (PIF).

Salma al-Shehab, 34, a mother of two young children, was initially sentenced to serve three years in prison for the “crime” of using an internet website to “cause public unrest and destabilise civil and national security”. But an appeals court on Monday handed down the new sentence – 34 years in prison followed by a 34-year travel ban – after a public prosecutor asked the court to consider other alleged crimes.

According to a translation of the court records, which were seen by the Guardian, the new charges include the allegation that Shehab was “assisting those who seek to cause public unrest and destabilise civil and national security by following their Twitter accounts” and by re-tweeting their tweets. It is believed that Shehab may still be able to seek a new appeal in the case. 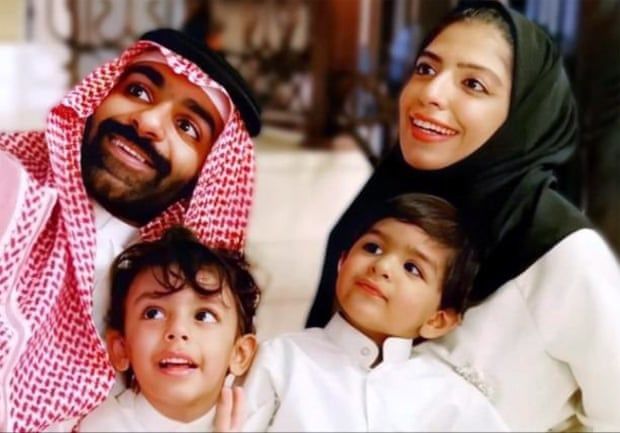 Salma al-Shehab and her family.

By all accounts, Shehab was not a leading or especially vocal Saudi activist, either inside the kingdom or in the UK. She described herself on Instagram – where she had 159 followers – as a dental hygienist, medical educator, PhD student at Leeds University and lecturer at Princess Nourah bint Abdulrahman University, and as a wife and a mother to her sons, Noah and Adam.

Her Twitter profile showed she had 2,597 followers. Among tweets about Covid burnout and pictures of her young children, Shehab sometimes retweeted tweets by Saudi dissidents living in exile, which called for the release of political prisoners in the kingdom. She seemed to support the case of Loujain al-Hathloul, a prominent Saudi feminist activist who was previously imprisoned, is alleged to have been tortured for supporting driving rights for women, and is now living under a travel ban.

One person who knew Shehab said she could not stomach injustice. She was described as well-educated and an avid reader who had arrived in the UK in 2018 or 2019 to pursue her PhD at Leeds. She had returned home to Saudi Arabia in December 2020 on a holiday and had intended to bring her two children and husband back to the UK with her. She was then called in for questioning by Saudi authorities and eventually arrested and tried for her tweets.

A person who followed her case said Shehab had at times been held in solitary confinement and had sought during her trial to privately tell the judge something about how she had been handled, which she did not want to state in front of her father. She was not permitted to communicate the message to the judge, the person said. The appeals verdict was signed by three judges but the signatures were illegible.

Twitter declined to comment on the case and did not respond to specific questions about what – if any – influence Saudi Arabia has over the company. Twitter previously did not respond to questions by the Guardian about why a senior aide to Prince Mohammed, Bader al-Asaker, has been allowed to keep a verified Twitter account with more than 2 million followers, despite US government allegations that he orchestrated an illegal infiltration of the company which led anonymous Twitter users to be identified and jailed by the Saudi government. One former Twitter employee has been convicted by a US court in connection to the case.

One of Twitter’s biggest investors is the Saudi billionaire Prince Alwaleed bin Talal, who owns more than 5% of Twitter through his investment company, Kingdom Holdings. While Prince Alwaleed still serves as chairman of the company, his control over the group faced questions in the US media, including the Wall Street Journal, after it emerged that the Saudi royal – a cousin of the crown prince – had been held captive at the Ritz Carlton in Riyadh for 83 days. The incident was part of a broader purge led by Prince Mohammed against other members of the royal family and businessmen, and involved allegations of torture, coercion and expropriation of billions in assets into Saudi coffers.

In a 2018 Bloomberg interview of Prince Alwaleed, which was conducted in Riyadh seven weeks after his release, the billionaire acknowledged he had reached a “confirmed understanding” with the Saudi government, apparently in connection to his release, which was confidential.

More recently, Kingdom Holding announced in May that it had sold about 17% of its company to the PIF, where Prince Mohammed serves as chairman, for $1.5bn. That, in turn, makes the Saudi government a significant indirect investor in Twitter. According to Twitter, investors do not play a role in managing the company’s day-to-day business.

The European Saudi Organization for Human Rights condemned Shehab’s sentence, which it said was the longest prison sentence to ever be brought against any activist. It noted that many female activists have been subjected to unfair trials that have led to arbitrary sentences and have been subjected to “severe torture”, including sexual harassment.

Khalid Aljabri, a Saudi who is living in exile and whose sister and brother are being held in the kingdom, said the Shehab case proved Saudi Arabia’s view that dissent equates to terrorism.

“Salma’s draconian sentencing in a terrorism court over peaceful tweets is the latest manifestation of MBS’s ruthless repression machine,” he said, referring to the crown prince. “Just like [journalist Jamal] Khashoggi’s assassination, her sentencing is intended to send shock waves inside and outside the kingdom – dare to criticise MBS and you will end up dismembered or in Saudi dungeons.”

While the case has not received widespread attention, the Washington Post on Tuesday published a scathing editorial about Saudi Arabia’s treatment of the Leeds student and said her case showed that “commitments” the president had received on reforms were “a farce”.

“At the very least, Mr. Biden must now speak out forcefully and demand that Ms. Shehab be released and allowed to return to her sons, 4 and 6 years old, in the United Kingdom, and to resume her studies there,” it read.