The UK health secretary has criticised people who have chosen not to be vaccinated against coronavirus as they “take up hospital beds” that could be used for patients in need.

Sajid Javid said the unvaccinated – about 5 million people or 10% of the eligible population – were having a damaging impact on society and creating extra pressure on the health system.

“They must really think about the damage they are doing to society,” Javid told Sky News on Sunday. “They take up hospital beds that could have been used for someone with maybe a heart problem, or maybe someone who is waiting for elective surgery.” 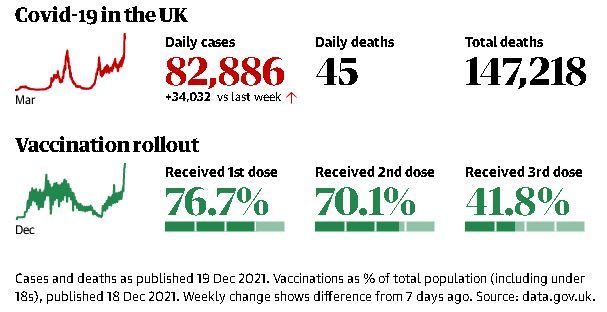 About nine out of 10 of those needing the most care in hospital are unvaccinated.

Javid’s comments came after Prof Stephen Powis, the medical director of NHS England, said the health service was on a “war footing”, with plans being developed to treat 15% of Covid patients at home, with remote monitoring of their oxygen levels.

The strategy would allow patients “the same care they would [receive] in hospital but from the comfort of their own home”, Powis told the Sunday Times. “This is better for patients, it is better for their families and it is better for the NHS, as it limited the spread of the virus, which we know at the minute is rising exponentially.”

Powis added that plans for “care hotels”, in which the NHS would pay for patients to be looked after by live-in carers, were being drawn up, with three hotels in southern England already operating. An army of 20,000 NHS reservists – former doctors, nurses and non-clinical staff – may be called on to solidify services.

Javid on Sunday did not rule out the possibility of further Covid restrictions. He said ministers were discussing Covid data “almost on an hourly basis” with advisers.

Scotland is ahead of other UK nations in vaccinating its population, with 9% of eligible people still unvaccinated, compared with 10% in Wales, 11% in England and 14% in Northern Ireland.

Out of 57.5 million over-12s in the UK eligible for the vaccine, 51.1 million had received one jab (89%) while 6.4 million (11%) had not, according to data from the UK’s health agencies for vaccinations delivered up to 5 December.

The UK broke its record daily Covid case tally three days in a row this week, with cases jumping above 90,000 on Friday. On Sunday, the total number of Omicron cases detected surged to more than 37,000.

As of 16 December, there were 7,611 people in UK hospitals with Covid and 875 occupying ventilation beds, according to government data.