The Oscars film academy has condemned Will Smith for slapping Chris Rock at Sunday's ceremony, and has launched a formal review of the incident.

A statement said it would "explore further action and consequences" in accordance with California law, and the body's standards of conduct.

Smith slapped Rock in the face on stage after the comic made a joke about the actor's wife, Jada Pinkett Smith.

The incident cast a pall on what should have been Hollywood's biggest celebration and overshadowed others' achievements, one member of the Academy of Motion Pictures, Arts and Sciences - which organises the Oscars ceremony - told the BBC.

"I woke up so bummed out about what Will Smith did," said the member. "To me, he stole the limelight. I don't think that was the place to be so violent. Most people were shocked. There were children there. It was a place to celebrate." She asked not to be named.

Monday's statement from the organisation behind the Oscars said: "The Academy condemns the actions of Mr Smith at last night's show. We have officially started a formal review around the incident and will explore further action and consequences in accordance with our Bylaws, Standards of Conduct and California law."

Actor and comedian Tiffany Haddish, who co-starred with Jada Pinkett Smith in the 2017 comedy Girls Trip, described the exchange to People magazine as "the most beautiful thing I've ever seen". She said Smith had stood up for his wife.

However, many said Smith was wrong to use violence.

Marshall Herskovitz, a film producer, tweeted early on Monday morning: "I call upon the Academy, of which I am a member, to take disciplinary action against Will Smith. He disgraced our entire community tonight."

Roger Ross Williams, a black member of the Academy's board of governors, told the Hollywood Reporter that the confrontation drove him to tears because "it reinforces stereotypes about black people and it just hurts me to my core".

Actor Wendell Pierce, whose credits include HBO's The Wire and Treme, said he was hoping for "a public act of contrition" from Smith.

But he pointed out that Rock once produced a documentary on how black hairstyles are tied to identity.

"That film showed an appreciation for Jada's, and Black women's, struggle with the disease of alopecia. The joke did not. It insulted and provoked," he wrote on Twitter.

On social media, some users suggested Smith's actions could have violated the Academy's code of conduct and wondered whether Smith would be asked to return his award for Best Actor, which he collected onstage shortly after slapping Rock.

The code states the Academy is "categorically opposed to any form of abuse, harassment or discrimination", including members acting "in a manner that violates standards of decency".

It also reserves the right for the Academy board to suspend or expel those in violation of the code.

However, Hollywood insiders like actor Whoopi Goldberg have said it is unlikely Smith will lose his award.

"We're not going to take that Oscar from him," she predicted. "There will be consequences I'm sure, but I don't think that's what they're going to do."

Smith earned the award - his first - for his portrayal of Richard Williams, the father of tennis legends Venus and Serena Williams, in the film King Richard.

In a tearful acceptance speech, he apologised to his fellow nominees - but not to Rock - and said "love will make you do crazy things". 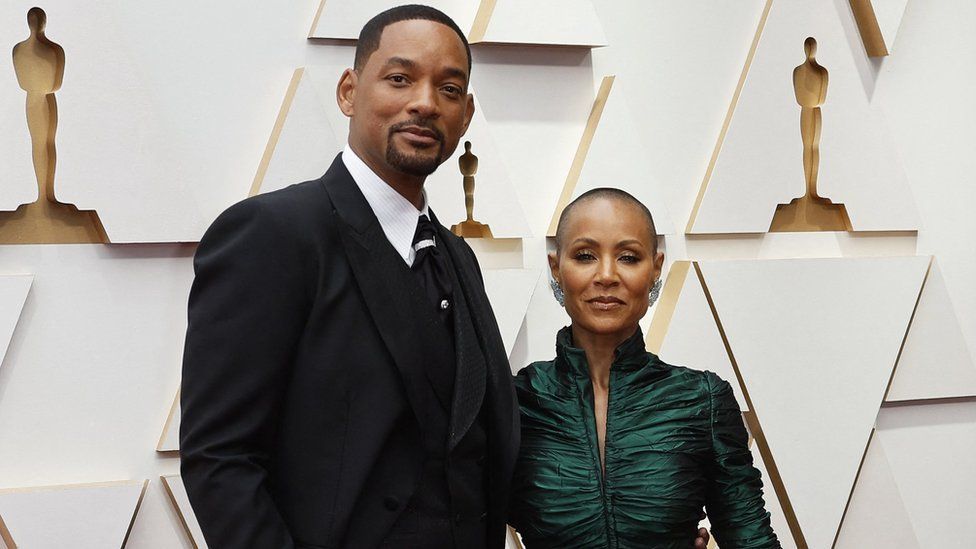 His wife has previously described hair loss due to her autoimmune disease as "terrifying".

She looked unamused when Rock quipped to her: "Jada, can't wait for GI Jane 2," in an apparent reference to her shaved head and a 1997 film in which the titular character sports a buzz cut.

Moments later, Smith walked on stage and struck Rock before returning to his seat and shouting: "Keep my wife's name out of your [expletive] mouth."

"Now we all have to worry about who wants to be the next Will Smith in comedy clubs and theatres," she wrote.

Rock declined to press charges and has not commented publicly about the slap.

In the moments after the altercation, he quipped that it was probably "the greatest night in the history of television", before presenting the award for best documentary.