Betty White was US television's Golden Girl with the heart of gold, celebrated for her comic acting abilities from TV's early days up to the 21st Century, while remaining committed to her animal activism.

"I have to keep acting so that I can afford to keep doing my charity work!" she joked to The Hollywood Reporter in 2018.

Born in Illinois in 1922, White became one of America's original screen stars, enjoying a career that encompassed eight decades and earned her many accolades.

As an only child, she moved with her family to Los Angeles during the height of The Great Depression, and in the late 1930s began working as an actress and model. Her fledgling career had to be put on hold, though, during the Second World War, when she went to work with the American Women's Voluntary Services.

After the war, White continued with her showbiz ambitions with mixed success, before landing her own radio show and then appearing on Al Jarvis's Hollywood on Television variety talk show.

She died on Friday, weeks before her 100th birthday. 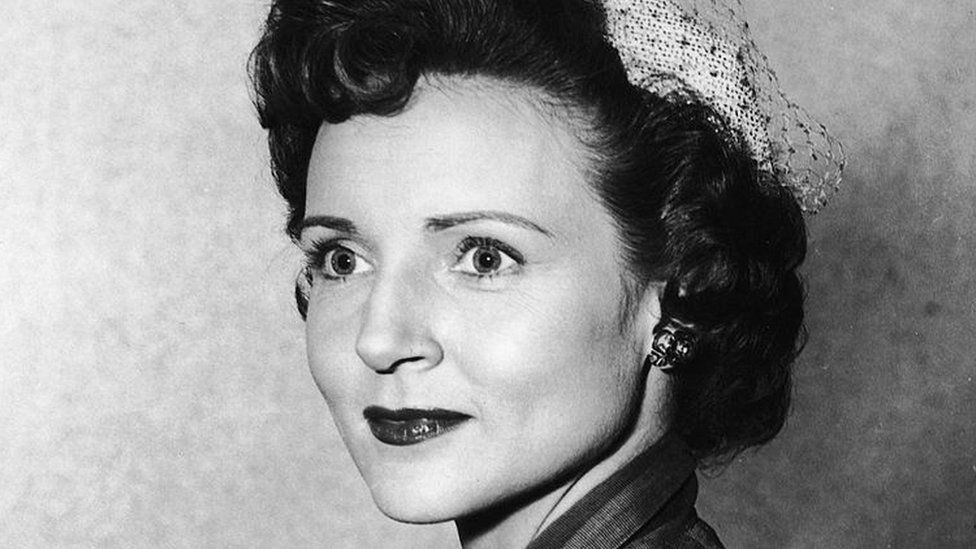 Clearly a burgeoning talent, she took over the reins of the TV show in the early 1950s, and was subsequently nominated for her first Emmy Award for best TV actress in 1951. It was the new awards' first ever category to recognise the achievements of women on the box.

Next came the TV sitcom Life with Elizabeth - a show she launched herself, alongside George Tibbles. "He wrote and I produced," she explained. "I was one of the first women producers in Hollywood."

White kept her profile high with many chat show appearances, and met her third husband (and "love of my life") Allen Ludden on the game show Password in 1961. The couple were married from 1963 until Ludden's death in 1981. 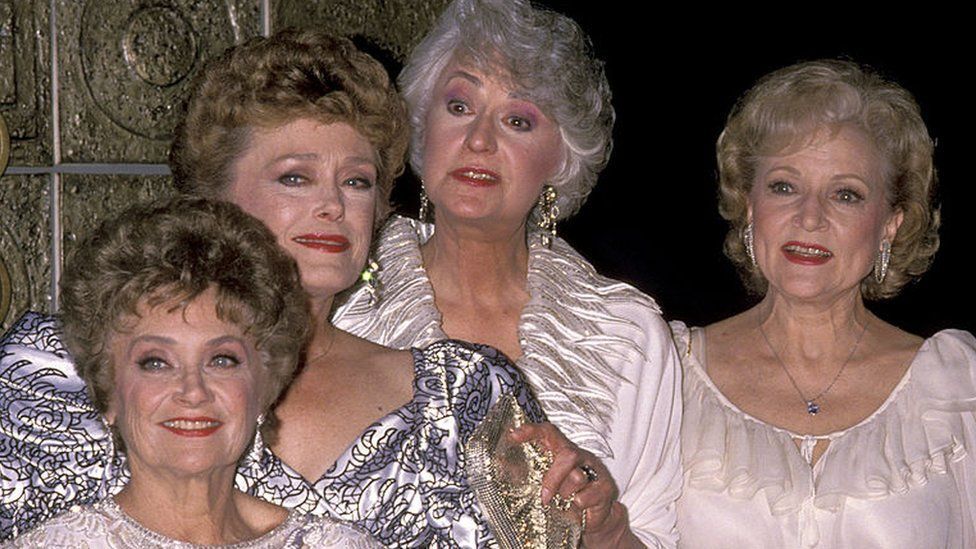 The actress's biggest role so far came as Sue Ann Nivens on The Mary Tyler Moore Show in the 1970s. Her sharp-witted character, who had an eye for the men, worked alongside the sitcom's titular star in a fictional Minneapolis television newsroom.

The job won White two more Emmy Awards and set her up for what would become her most famous role, as the naive-but-loveable Rose Nylund in The Golden Girls, which carried her through the 1980s and 90s.

Nylund was a Norwegian-American who moved to Miami after the death of her husband and formed a later life bond with three other women, played by Beatrice Arthur, Rue McClanahan and Estelle Getty.

In 1986, it won the Emmy for outstanding comedy and White scooped the individual award for best comedy actress. 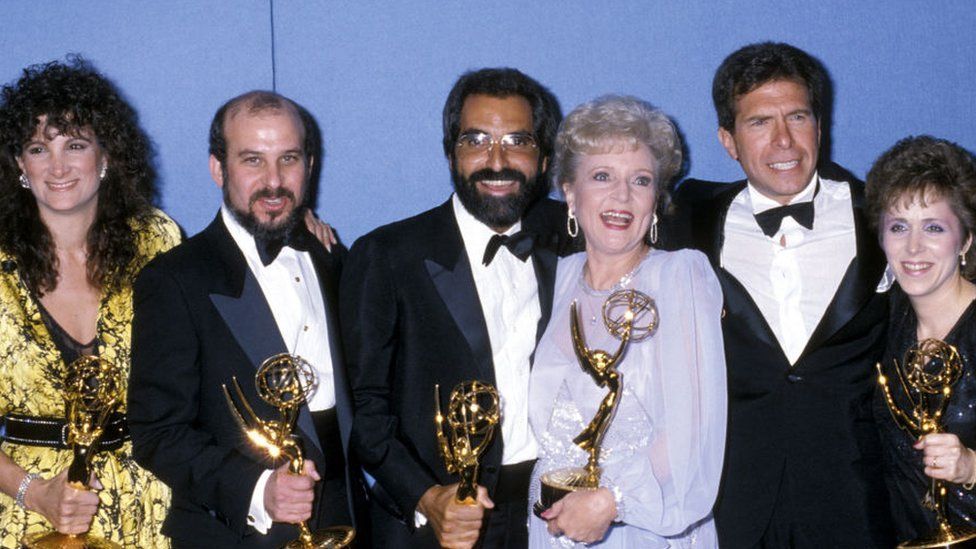 "I am the lucky one who gets to come up and pick up this beautiful golden girl," she said in her acceptance speech. "But Estelle and Rue and Bea and I all thank you - we're a match-set, you can't split us up."

After The Golden Girls went off air in 1992, White - who was by then also a published author - appeared in the short-lived spin-off Golden Palace.

She also had a recurring role on soap opera The Bold and the Beautiful from 2006 to 2009, and hosted several other entertainment shows, including the prank show Betty White's Off Their Rockers. 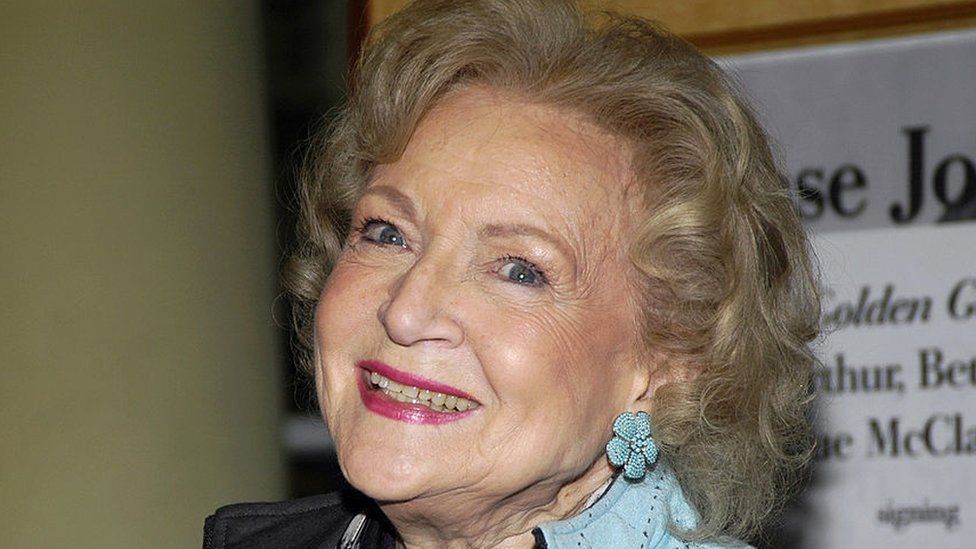 As well as winning awards, White has been described as "one of the nicest women in showbusiness"

But her career caught fire again in 2010, when she starred in another sitcom, Hot in Cleveland, opposite Valerie Bertinelli, Jane Leeves and Wendie Malick.

"It's just a terrific show. The chemistry between the girls is so great," White told Newsweek.

The same year, the veteran also became the oldest ever host of Saturday Night Live, following a Facebook campaign to get her on the prime-time show.

Her 90th birthday in 2012 was marked with an all-star television special featuring her old co-star Tyler Moore, Ellen DeGeneres and Carl Reiner, as well as Tina Fey and Ed Asner.

Animals (real ones, not toys) were always a passion, and she worked closely with the Los Angeles Zoo and the Morris Animal Foundation for more than four decades.

"I'm actually the luckiest old broad alive," she said. "Half my life is working in a profession I love and the other half is working with animals." 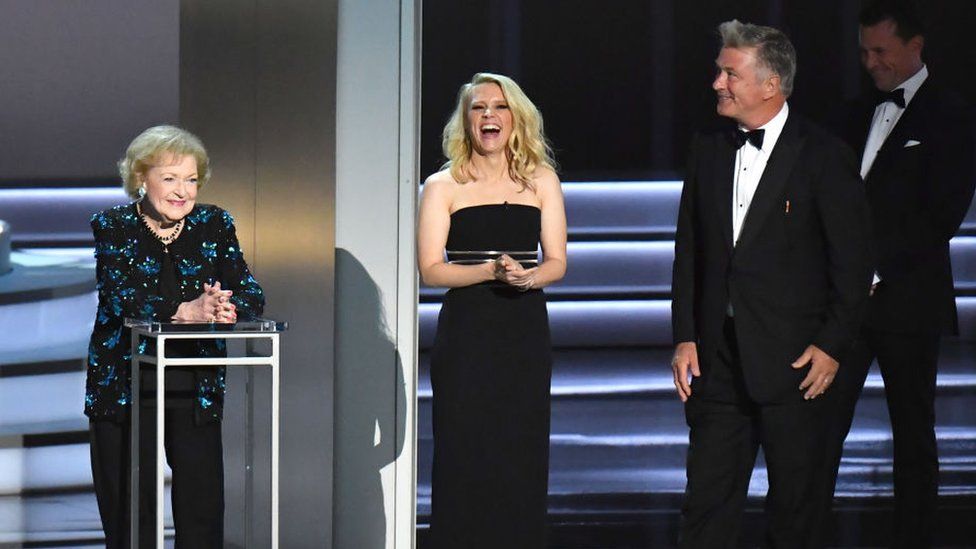 White entertained Kate McKinnon, Alec Baldwin and co on stage at the Emmy Awards in 2018

In 2015, she was honoured with a lifetime achievement Emmy Award - her eighth Emmy in total.

"She is one of the most beloved female performers in the history of television," said Bob Mauro of the National Academy of Television Arts and Sciences, who described White as an "American institution".

"Betty's career as a female pioneer has followed television from literally the beginning of the medium, winning her first Emmy Award in 1952, to the digital-streaming future, winning again in 2010."

Emmy vice-president David Michaels went on to say that White was "also one of the nicest women in showbusiness".