Art object or machine for living in Architect William Massie’s personal prefab project takes the mass out of mass customization to create a one-of-a-kind wonder. 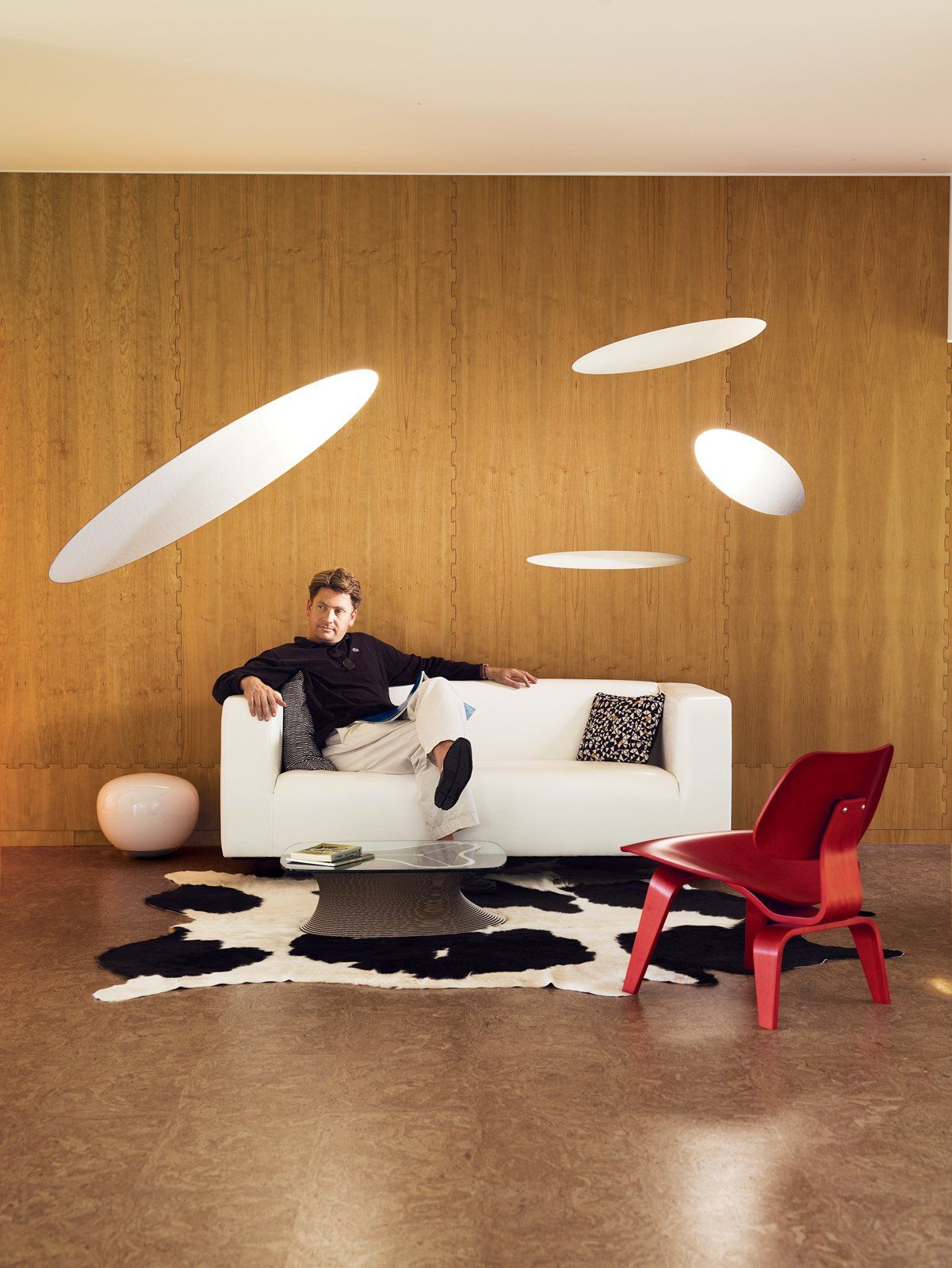 William Massie relaxes inside the utterly unique interior of his America House 08. 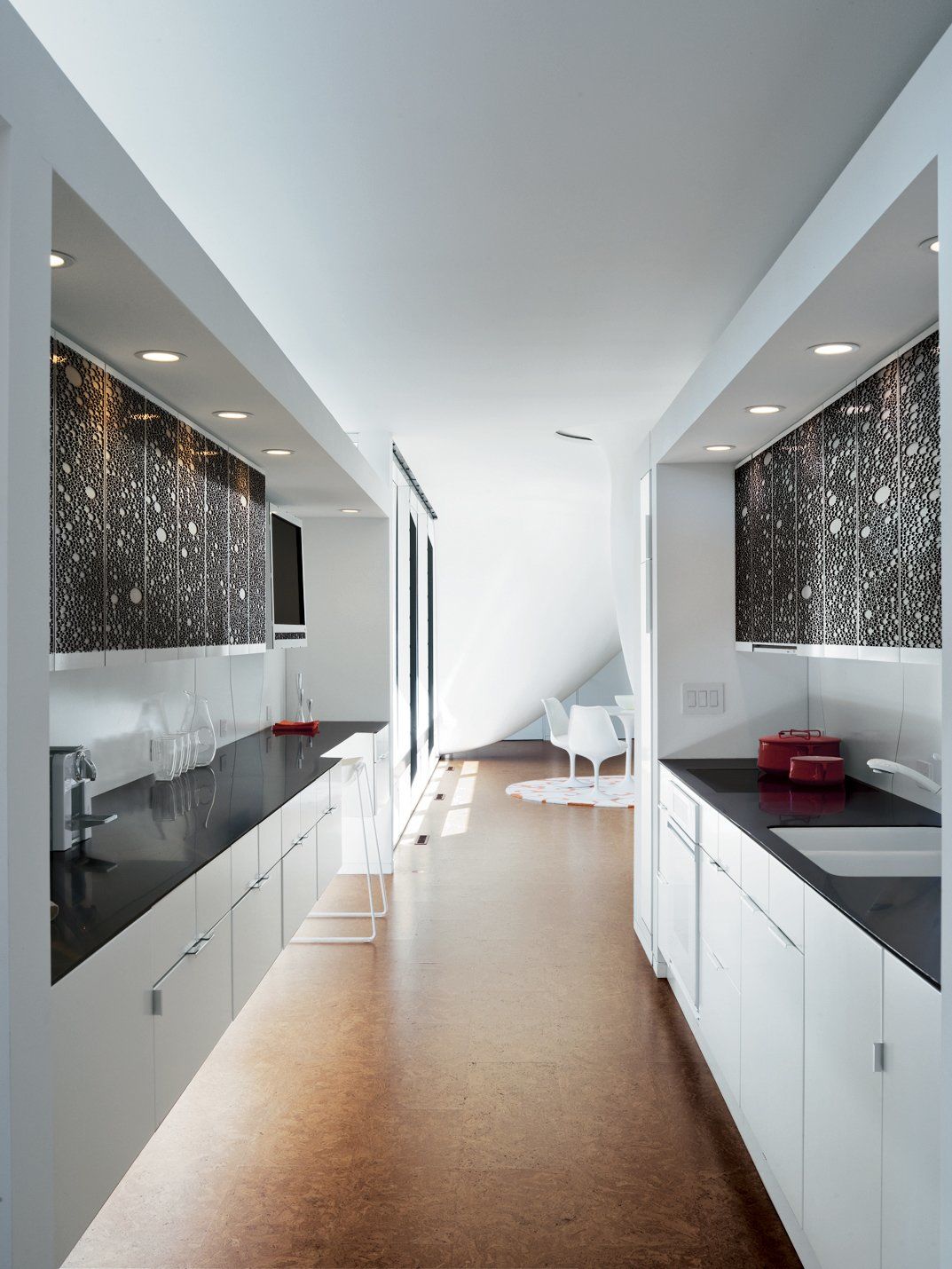 The kitchen is a long sleek space. 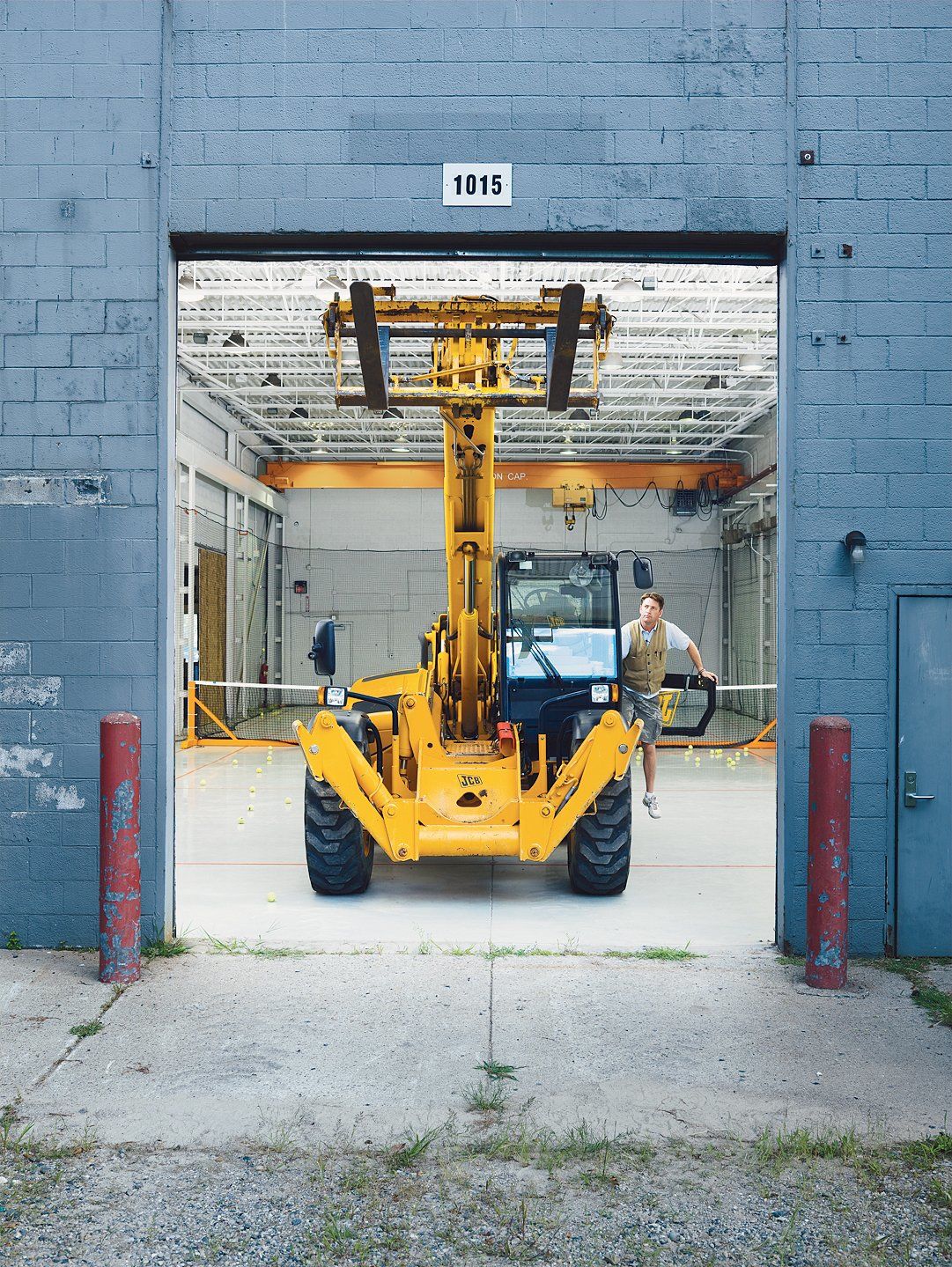 Milling technologies at various scales helped give the house its unique textures and spaces. The result is as much a demonstration piece of domestic construction techniques as it is a place to live.

William Massie always longed to live, work, and build in the same place. For most of his career, the charismatic architect, known for championing the latest design technologies, had to travel long distances in order to construct his experimental homes.

Then, in 2005, after becoming head of the architecture department at the Cranbrook Academy of Art in Bloomfield Hills, Michigan, Massie had less time to do even that. Shortly after relocating for the job, he came across a former tool-and-die factory that was for sale in nearby Pontiac. At 10,000 square feet, it was large enough to erect a house in. Massie snapped it up. Finally, he could work on his residential designs close to home and in his own time.

Last summer, the architect completed the first home to come off of his factory’s highly idiosyncratic production line. An all-white, superbly elegant, 2,500-square-foot modernist box, the steel-framed house, which was built in sections, is easily recognizable for its roof line that parabolically plunges at one point to form a dimple.

The house, which Massie dubbed the American House 08, was built to move: No sooner was it completed than the architect jumped behind the wheel of his dual-axle GMC truck and towed many of its components five miles along Woodward Avenue to Cranbrook. The house was reassembled on a lawn outside the art museum, next to a towering sculpture by Mark DiSuvero. After the addition of cork flooring and newly plastered ceilings, the house, part of an exhibition on Massie’s work, was opened to the public. But the 08 still faces a much longer and yet to be determined journey: to its eventual client.

For Massie, creating this "transportable" house proved inspirational. "It is the culmination of everything—the digital technology, the prefabrication techniques, and more formal architecture—that I have brought to my designs," he states. Walking inside, it is clear why. Massie’s grasp of domestic space, honed by a reverence for early modernists like Richard Neutra and Rudolf Schindler—he once lived in a Neutra house in Bozeman, Montana—has been enhanced by the freedom that designing inside his factory allows.

At first, all he did was erect the steel frame. Abandoning the standard practice of deciding a house’s layout before construction, Massie spent hours walking around inside to figure out, from the occupant’s point of view, what it would be like to live there. "There was never a need to finalize beforehand where the bathroom wall should be or where the front door had to be placed," he recalls. For the first time in his career, Massie found himself free of demanding clients. "They are not good coconspirators," this obsessive experimenter confesses. And experiment he did. Sometimes his search for different materials meant roaming up and down the aisles of Lowe’s and Home Depot, both equidistant from his factory, on his Segway. At other times, he would simply sit in a chair and see that a certain window could be higher. "I was able to play constantly," the 46-year-old exults.

The result of this approach (Massie refers to it as "subtly improvisational") is an interior that responds immediately, albeit quietly, to an occupant’s needs. Massie lowered the ceiling, creating space between the ceiling and the roof and making the house feel less like a solid block. He then made sure that the views from the master bedroom both to the living area and to the outside spoke directly to the choices offered by the house: Is it time to go outside to the lawn or return to the main space?

Some decisions were straightforward. In keeping with modernist tradition, skylights and floor-to-ceiling windows in the living room invite natural light inside; the question for Massie, as he wandered around inside his frame of a house, was simply how to use that light. He soon decided that shade, even darkness, would make the master suite feel more separate, so he inserted a 34-foot-long panel to bisect the wall of glass. The darkened room thus feels apart from the rest of the house and, appropriately to Massie’s original idea, more private.

When Massie attended Columbia University back in the late 1980s, he and his classmates believed that the computer would revolutionize design. For many, that ended up meaning greater dexterity with programs like AutoCAD. Massie, however, was determined to use this new technology in the construction process itself, not merely as a design tool.

For over a decade, attaching his computer to a laser cutter, he learned how to draw intricate shapes—such as jigsaw patterns for wood paneling—and have the machine cut them out seamlessly. He then bought his own computer numerically controlled (CNC) milling machine, which could drill down into a material to create molds. He was thus able to redefine how standard materials such as concrete, wood, and even rubber were used. They no longer had to be flat or rectangular—they could become sculptural forms.

As soon as one steps inside the 08, the results of these battle-tested skills are evident. Two sculpted pods dominate the living room. One is the reverse of the roof dimple while the other houses a large stand-alone bath and shower. Both are made from the same structural insulated panels (SIPs) that in-fill the exterior, but, thanks to the laser cutter, these panels were sliced into even smaller pieces and pushed into dramatic shapes.

Massie’s computer-design wizardry is not confined to grandiose gestures. The cabinets—which look like thin sponges—are simply whiteboard sculpted out by the laser cutter according to a pattern set up on the computer (when viewed at the right vantage point the varying ellipses all condense to form perfect circles). In the master suite, two small rectangular sections of the walls have been filled with translucent rubber cubes also cut on this machine. "They allow light through as well as some exciting shadowy movement," Massie says.

Sometimes there seems no end to these flourishes. Orange rubber molds fill in the elliptical recesses on the house’s solid end walls; from certain angles the torqued shapes flatten out to form perfect circles. The bathroom sinks are made from the same colorful material. Surprisingly, though, the house does not feel self-conscious. "I don’t like design to be fetishized," he says flatly.

The 08 seems to amplify Massie’s own freewheeling spirit. During my visit he invited friends and family in for drinks. A built-in projector shone an episode of Twin Peaks onto the wall of the sculptured shower pod. LEDs in the floor beamed different colors onto each side of the dimple. With the rest of the living room subtly lit, it became a New York cocktail lounge. Those inside soon forgot, if they ever knew that what they were sitting in had been prefabricated in sections, transported to the site, and then bolted one to the other. Of course, this is the way Massie wants it. This architect came to the idea of transportability to satisfy his own design ambitions, not because he was obsessed with prefab.

When the house is moved again, some interior surfaces, such as the plaster ceilings, will, in Massie’s words, "have to be sacrificed." Redoing them, and reinstalling the floor, will cost about $20,000. The total transport cost, apart from any work to connect the house to the site, will be nearly $45,000. The cost of the house itself? $750,000. But the new owner will be getting something unlike any other prefab: a one-of-a-kind house by William Massie.

The architect is asking the buyer to view the 08 as a work of art. To that end, he has contemplated putting it up for auction on eBay. Like many of Massie’s ideas, this seems outlandish. Then again, so did buying an abandoned factory in suburban Detroit. The architect would have it no other way. 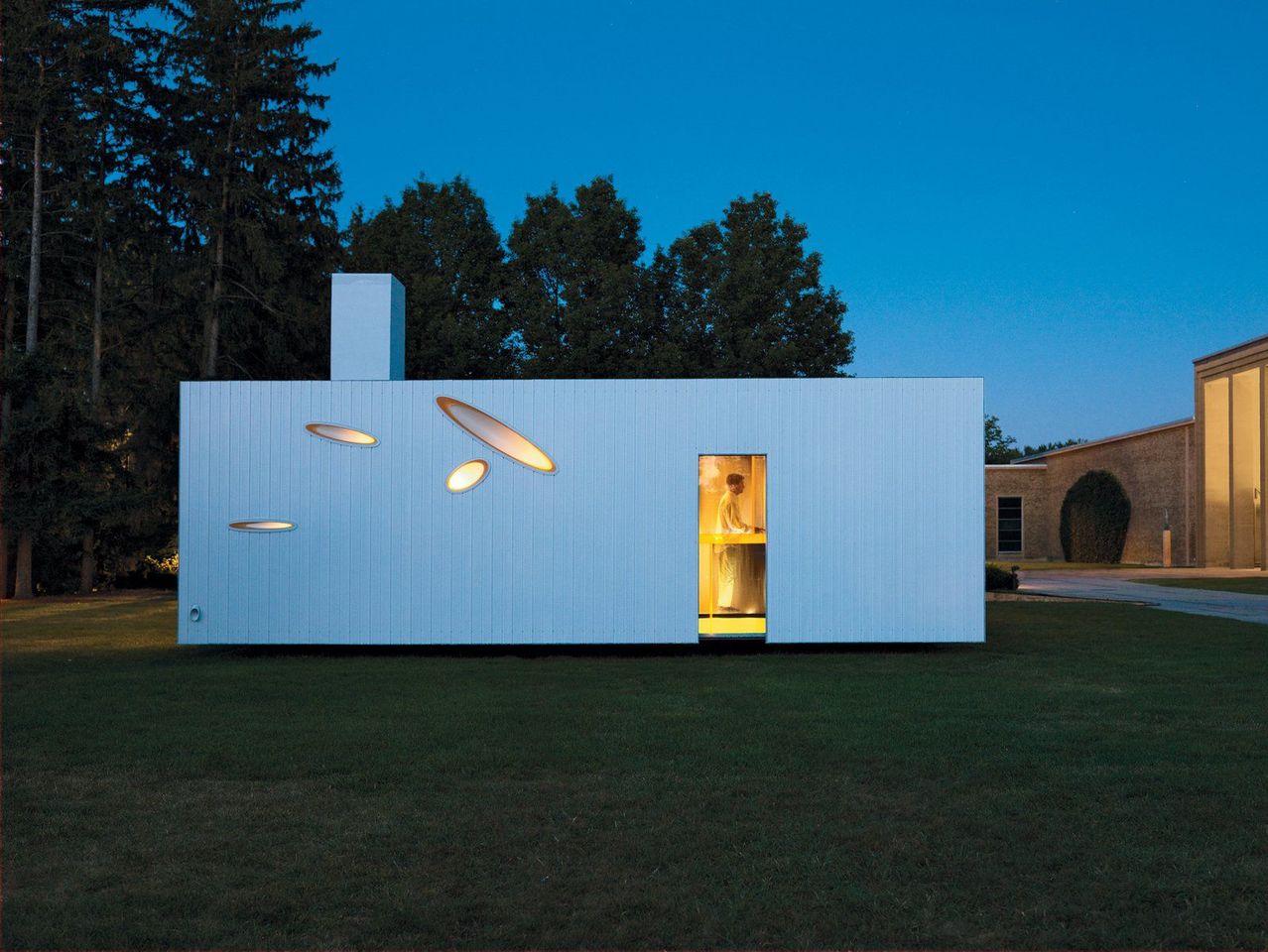 Seen from the outside, angular slits offer tantalizing glimpses of the home's interior. 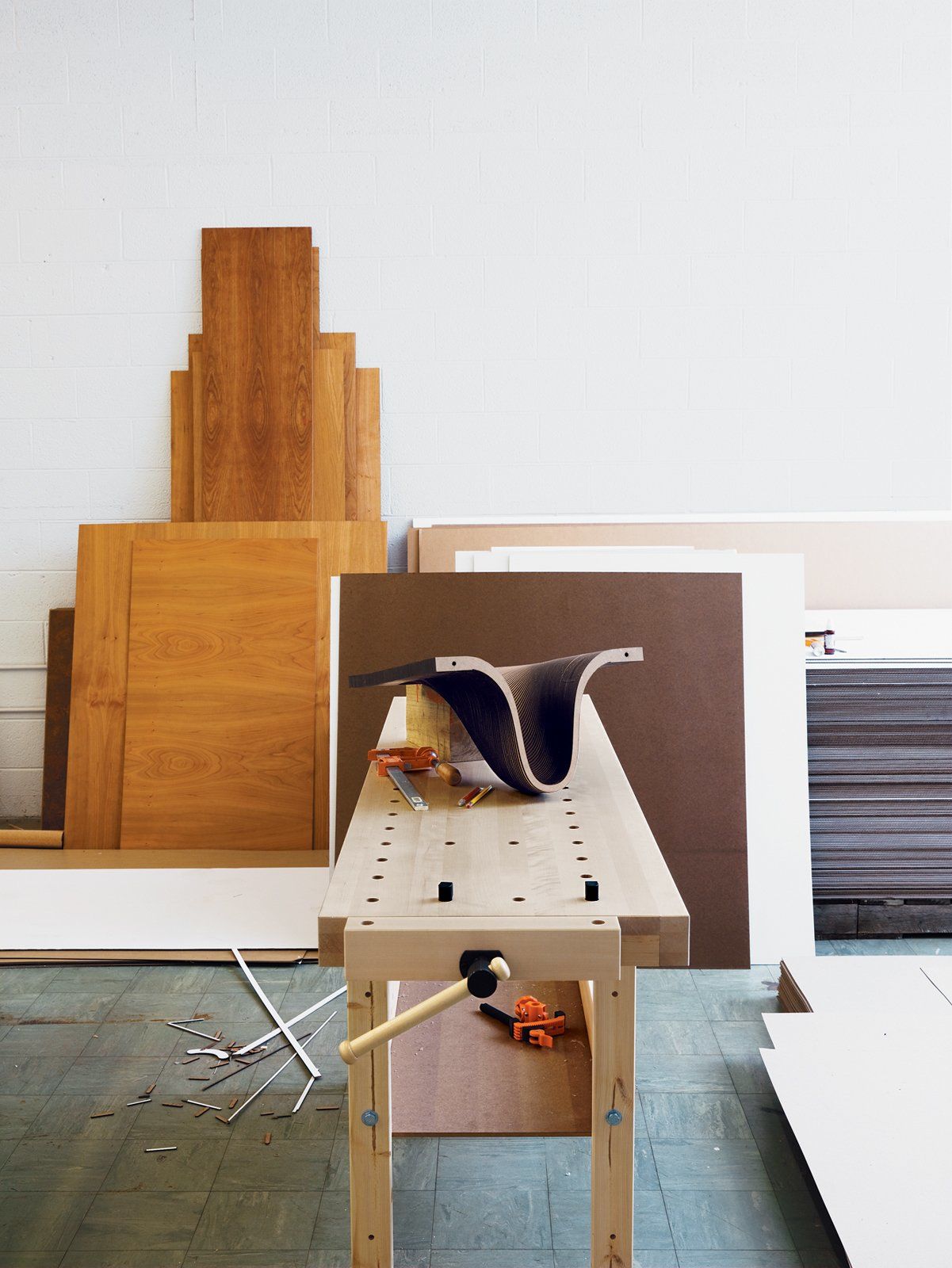 William Massie's factory was itself a spatial influence on the 08 project. The two main doors to the warehouse had originally been designed to allow a standard trailer to back inside. Thus, no section of the house could be wider than the trailer (12 feet). Although each section was designed with these dimensions in mind, getting them out proved tricky. In the end, Massie came with with a solution after building a test model. 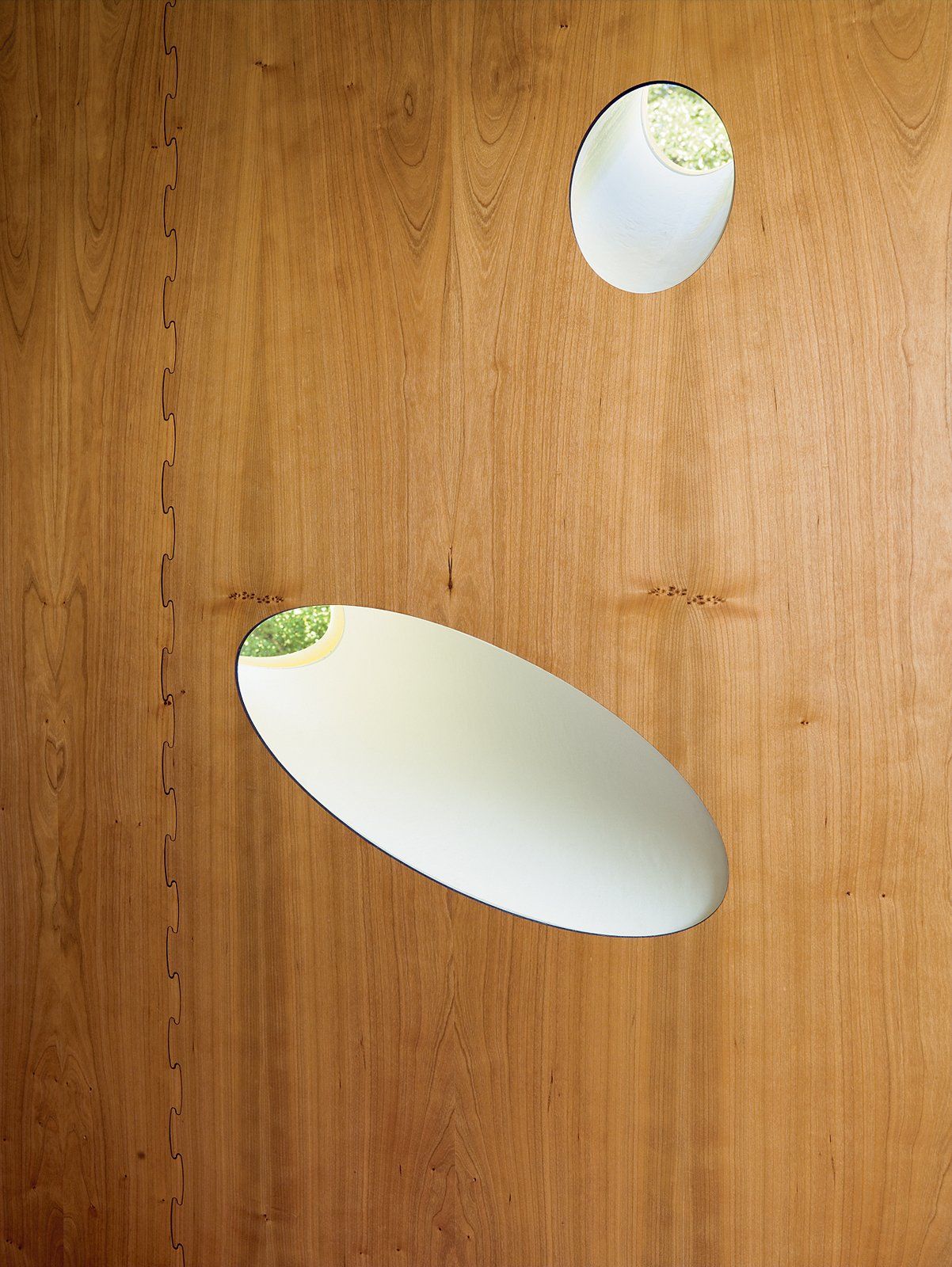 Irregular milled perforations form intriguing light wells in the skin of the house. 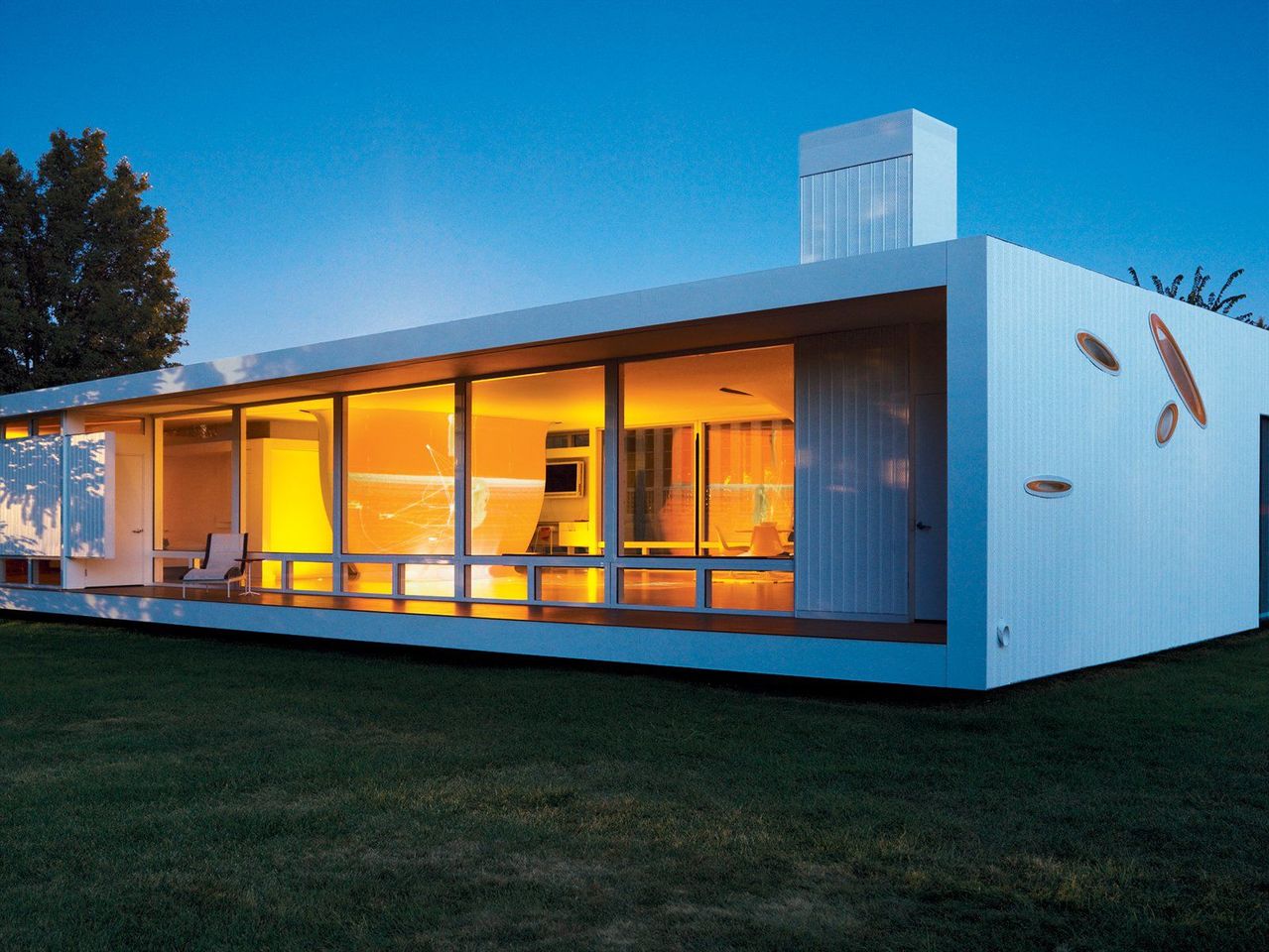 The curving, bulbous walls of the bath and shower reveal an unexpected secondary role as a screen for film projections, giving the house a sci-fi glow. 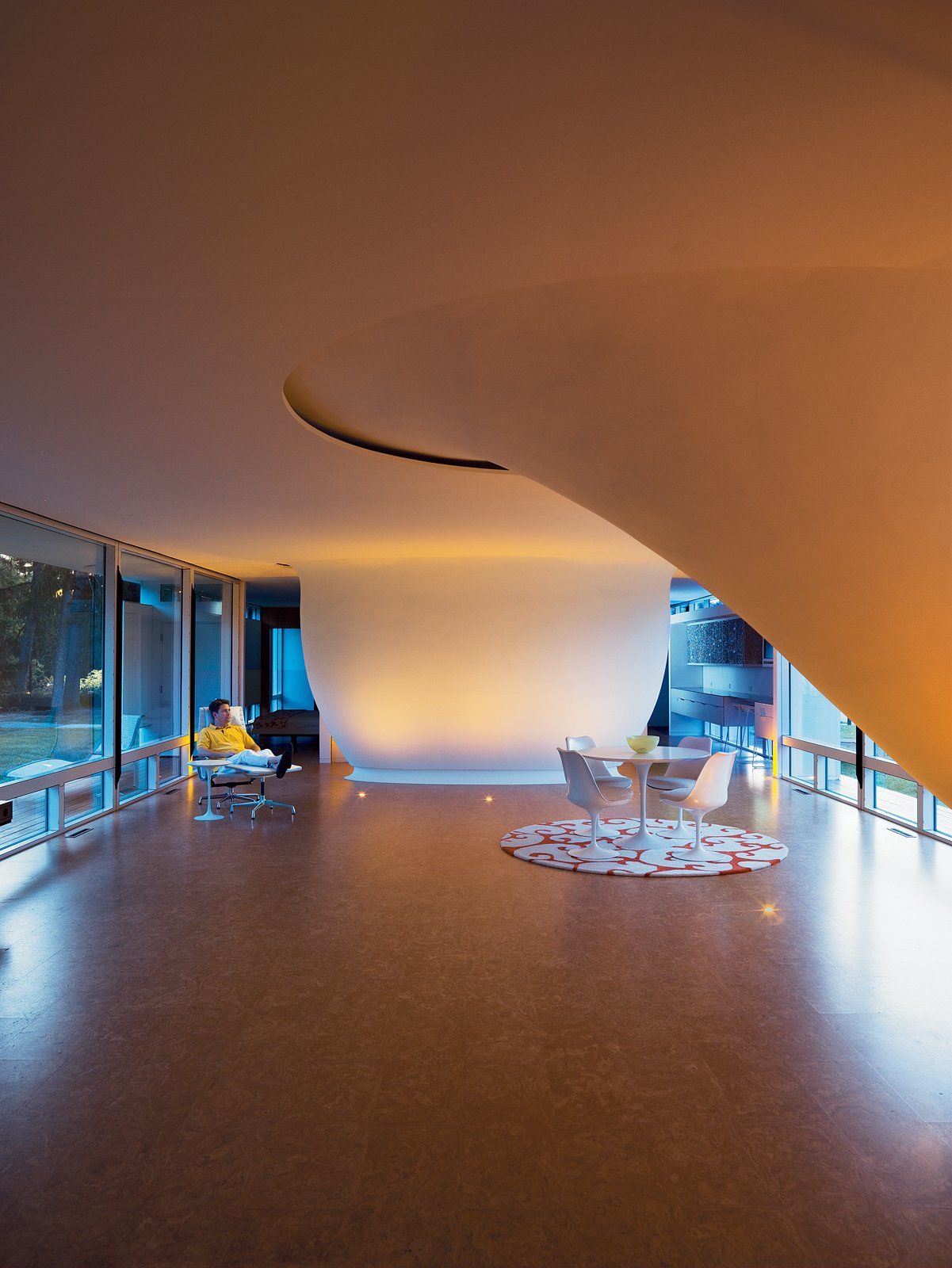 The inner dimple, not far from the front door, separates the entrance from the living space. 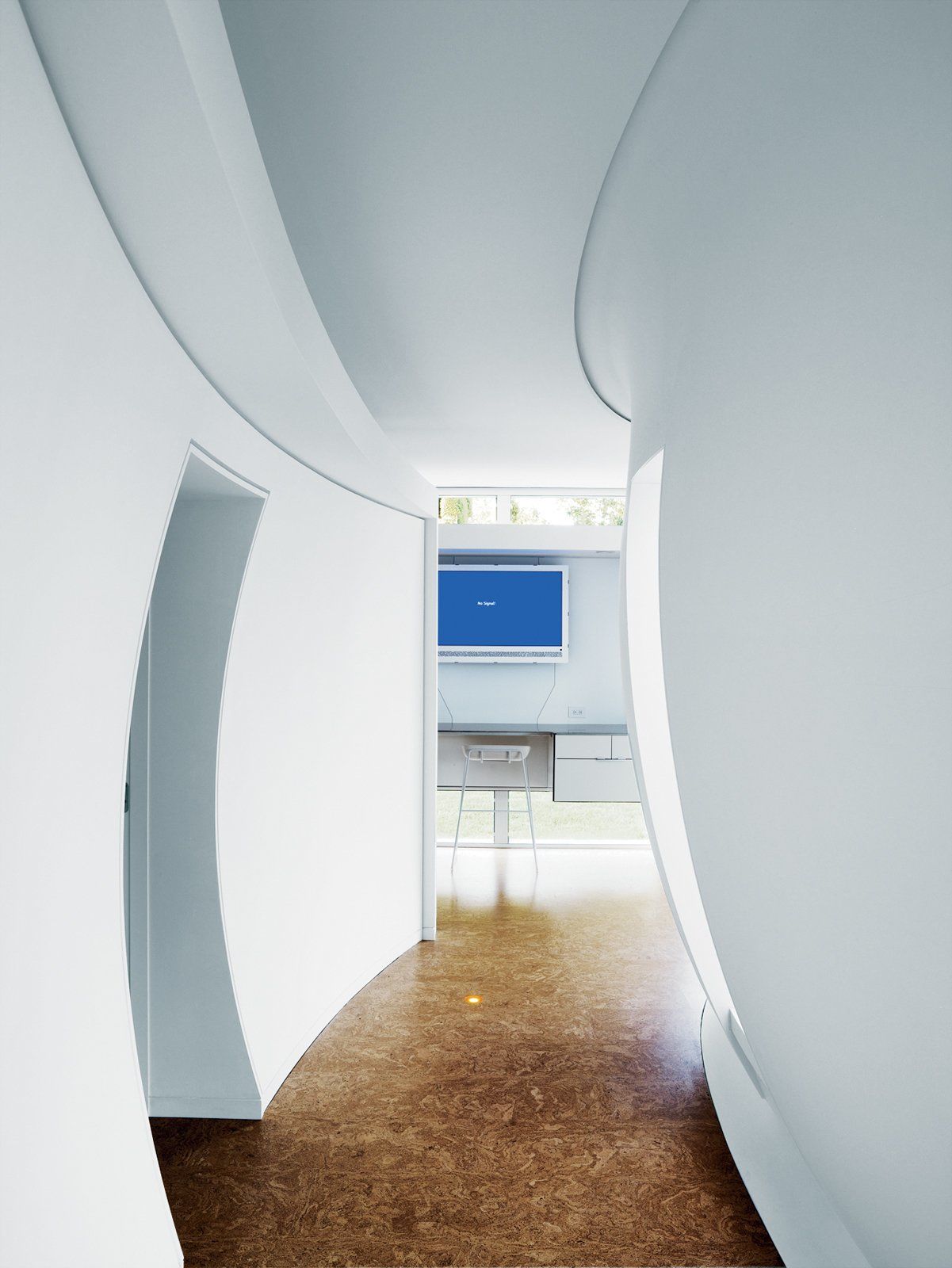 Up close the dimple forms a voluptuous hallway. 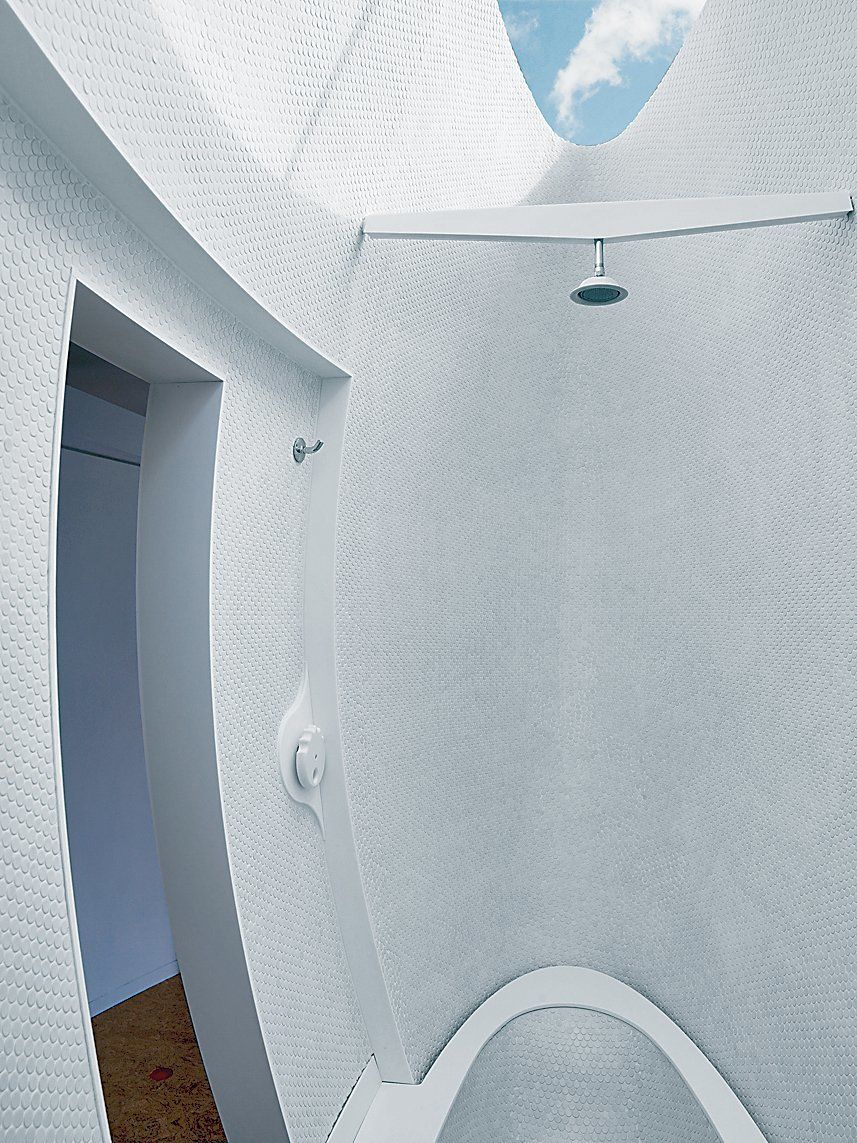 The curving exterior of the podlike bath and shower cuts an elegant form at the other end of the room. 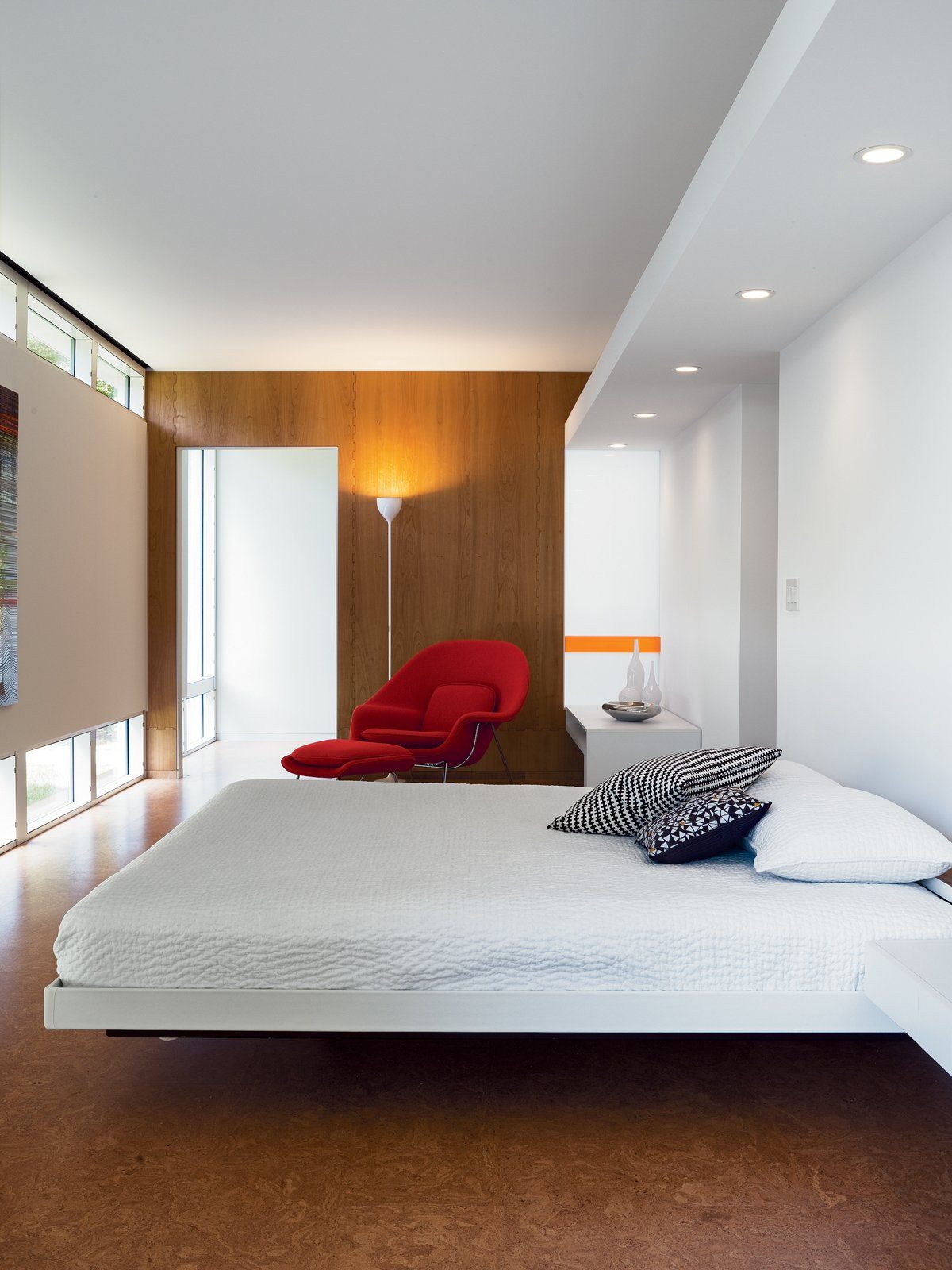 The bedroom is a comfortable show of geometric regularity.