The hearing in London follows fresh allegations about his conduct by British resident Corinna zu Sayn-Wittgenstein in a new podcast.

She accuses the ex-king of spying on and harassing her after their relationship broke down in 2012.

The former king, who abdicated in 2014, denies any wrongdoing.

Juan Carlos, who lives in the United Arab Emirates (UAE), did not attend the hearing - and a ruling is expected in several weeks.

He is appealing against a High Court decision in March, which rejected his claim that English courts had no jurisdiction over the case because he has state immunity as a royal.

"Whatever special status the defendant retained under the law and constitution of Spain, he was no longer a 'sovereign' or 'head of state' so as to entitle him to personal immunity," High Court judge Matthew Nicklin said at the time.

The former king was allowed to challenge part of that ruling. His lawyers are now making their case for immunity at the Court of Appeal in London for the period before he abdicated in 2014, when he was succeeded by his son Felipe VI.

Ms zu Sayn-Wittgenstein, a German-born businesswoman who lives in England, filed the harassment case in 2020.

She said the 84-year-old former king, who is married, had caused her "great mental pain" as a result of "a continuous and ongoing campaign of harassment" against her after their relationship ended. 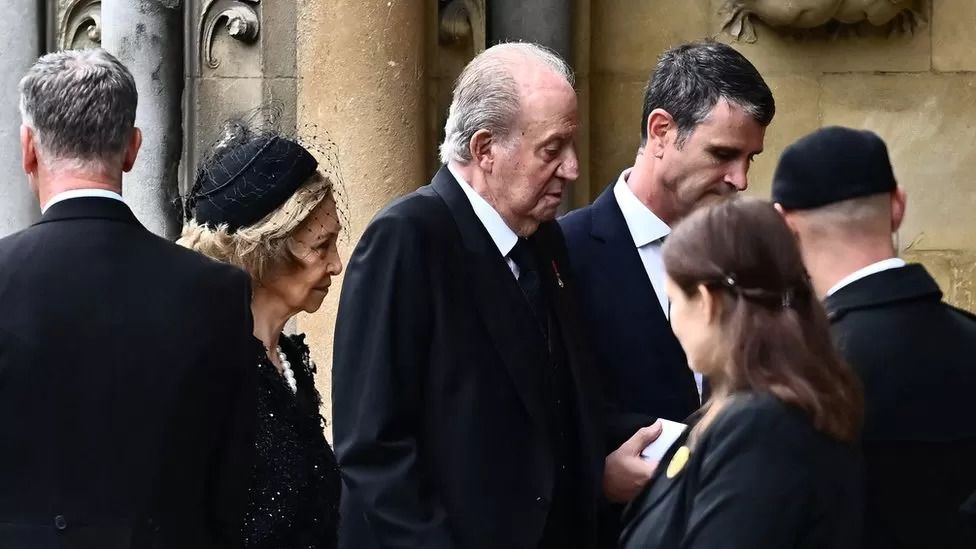 Juan Carlos (centre), alongside his estranged wife Queen Sofia, attended the funeral of Queen Elizabeth II in London in September

She is seeking damages over claims he pressured her to return gifts worth €65m (£56m; $65m), as well as allegations of break-ins and intimidation.

She said it began after the relationship broke down following the couple's notorious hunting trip to Botswana in 2012. The then king broke his hip and had to be flown home, sparking public anger amid a financial crisis and record unemployment figures in Spain.

Juan Carlos was credited with overseeing Spain's transition from dictatorship to democracy in 1975. But he abdicated the throne in 2014 following a series of scandals involving his family, including a corruption investigation involving his daughter's husband, Inaki Urdangarin, who was later jailed.

The former king has spent more than two years in self-imposed exile in the UAE, after leaving Spain over allegations of fraud which were eventually dropped. A Swiss investigation into a multi-million dollar payment from Saudi Arabia was closed because of insufficient evidence.

The legal case resumes as new details emerge of the relationship between Spain's former monarch and his ex-lover in a podcast called Corinna and the King.

In it, Ms zu Sayn-Wittgenstein, 57, speaks openly about the corruption allegations surrounding Juan Carlos when he was still king, saying he presided over a "court of miracles".

She alleges he would return from trips "happy as a five-year-old and there would be bags full of cash", which she alleges was "a very habitual situation".

She also recalls a story of him calling up the owner of "a great chateau of Bordeaux wines" asking for some to be sent, and "the next thing you know, 20 cases of this priceless wine would arrive".

"His wish was everyone's command, and people were literally falling over backwards just to please him," she adds.

He returned to Spain earlier this year to visit his family, and attended Queen Elizabeth II's state funeral at Westminster Abbey in London in September, alongside his estranged wife Queen Sofia.