Lifted on stilts above a steep site, the sharp-cornered Catton House recalls the form of a spaceship.

Canada’s most renowned architect and urban planner, Arthur Erickson prioritized a relationship with the landscape in his projects spanning residential, commercial, and civic work. One of his most notable designs, Robson Square, weaves together government buildings and public landscape in downtown Vancouver, turning the conventional high-rise on its side when it was completed in 1983. Decades earlier, he took a similarly daring approach to the Catton House, which rises from a challenging cliffside lot in West Vancouver and is now on offer for $4,798,000, or approximately $3,830,000 in U.S. currency. 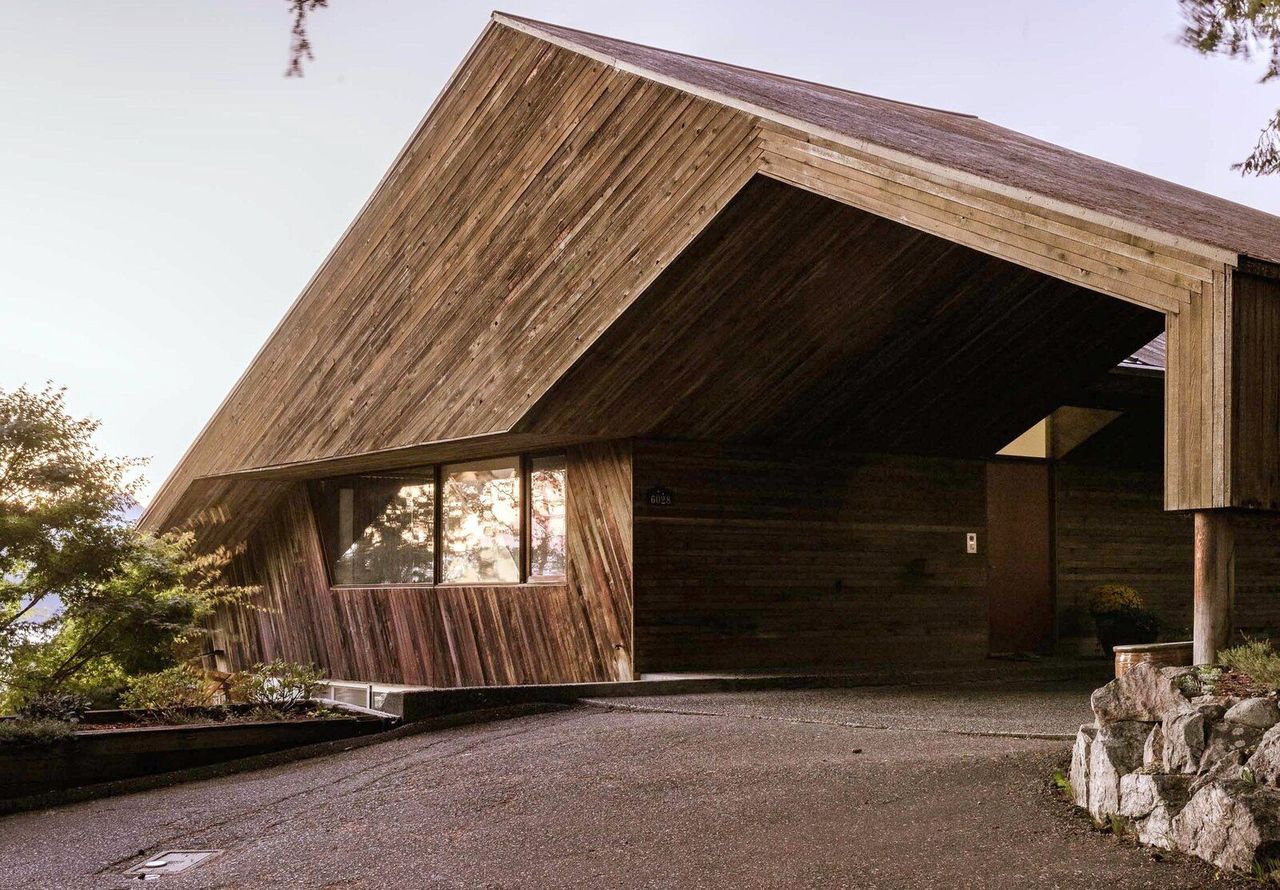 Commissioned in 1968 and completed in 1970, the Catton House-also known as the Starship House for its futuristic shape-is a four-bedroom, two-bathroom residence clad in cedar. A carport leads to the home’s uppermost level.

The home was commissioned in 1968 by Jean "Tuffy" Catton and her husband, Don, who were close friends of Erickson while he studied architecture at McGill University. In Arthur Erickson: An Architect’s Life, scholar and biographer David Stouck details the painful process that eventually birthed the three-story Catton House. Erickson quickly blew through the couple’s original $40,000 budget, straining their relationship, but delivered what the architect would call "a work of art…which reads like a piece of sculpture carved from a single block of wood." 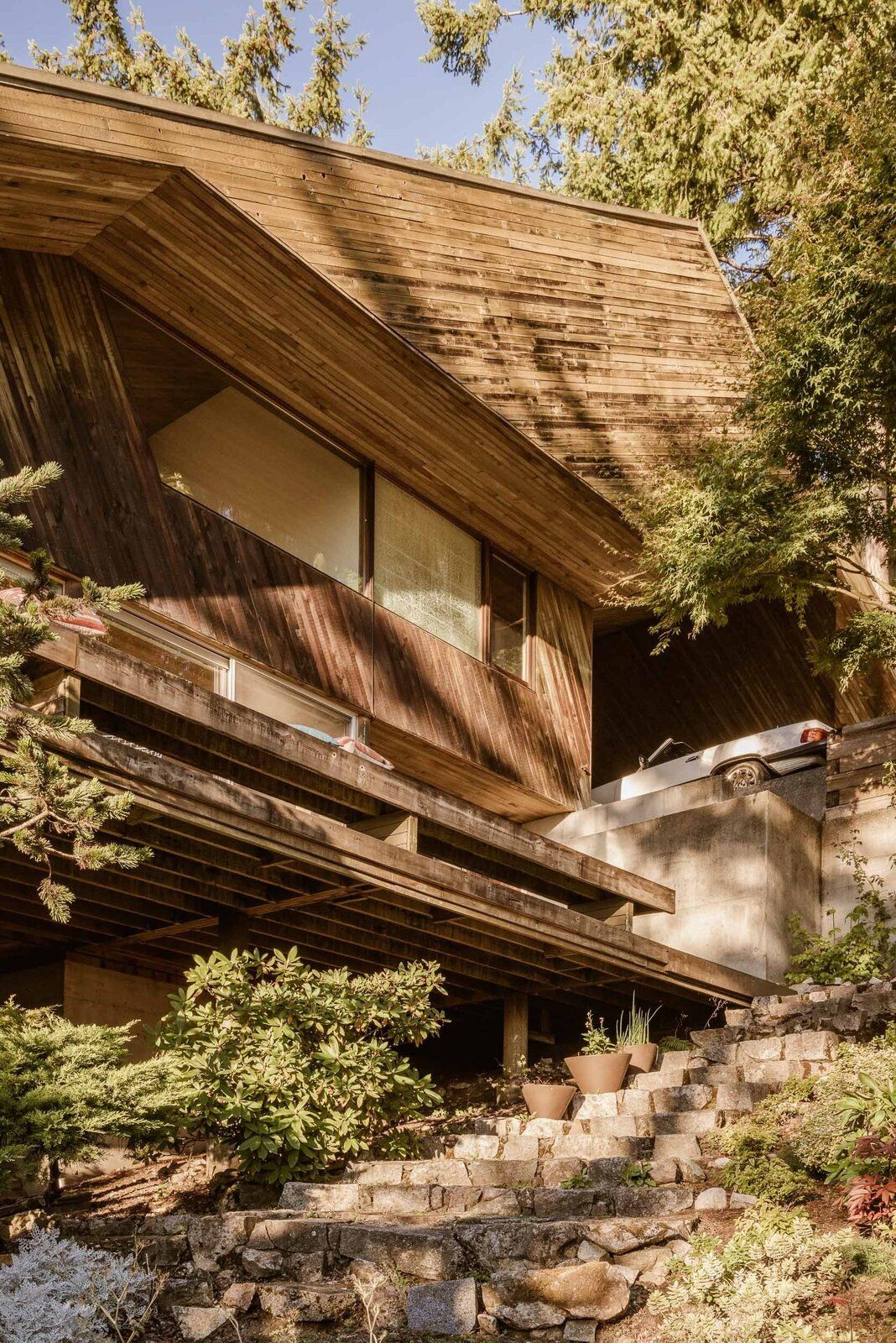 Says listing agent Trent Rodney of realty company West Coast Modern, "Of all the fabulous homes I’ve had the privilege of selling in the past two years, this one is my favorite. There was immediate reaction as soon as I uploaded photos of the house onto our Instagram page." 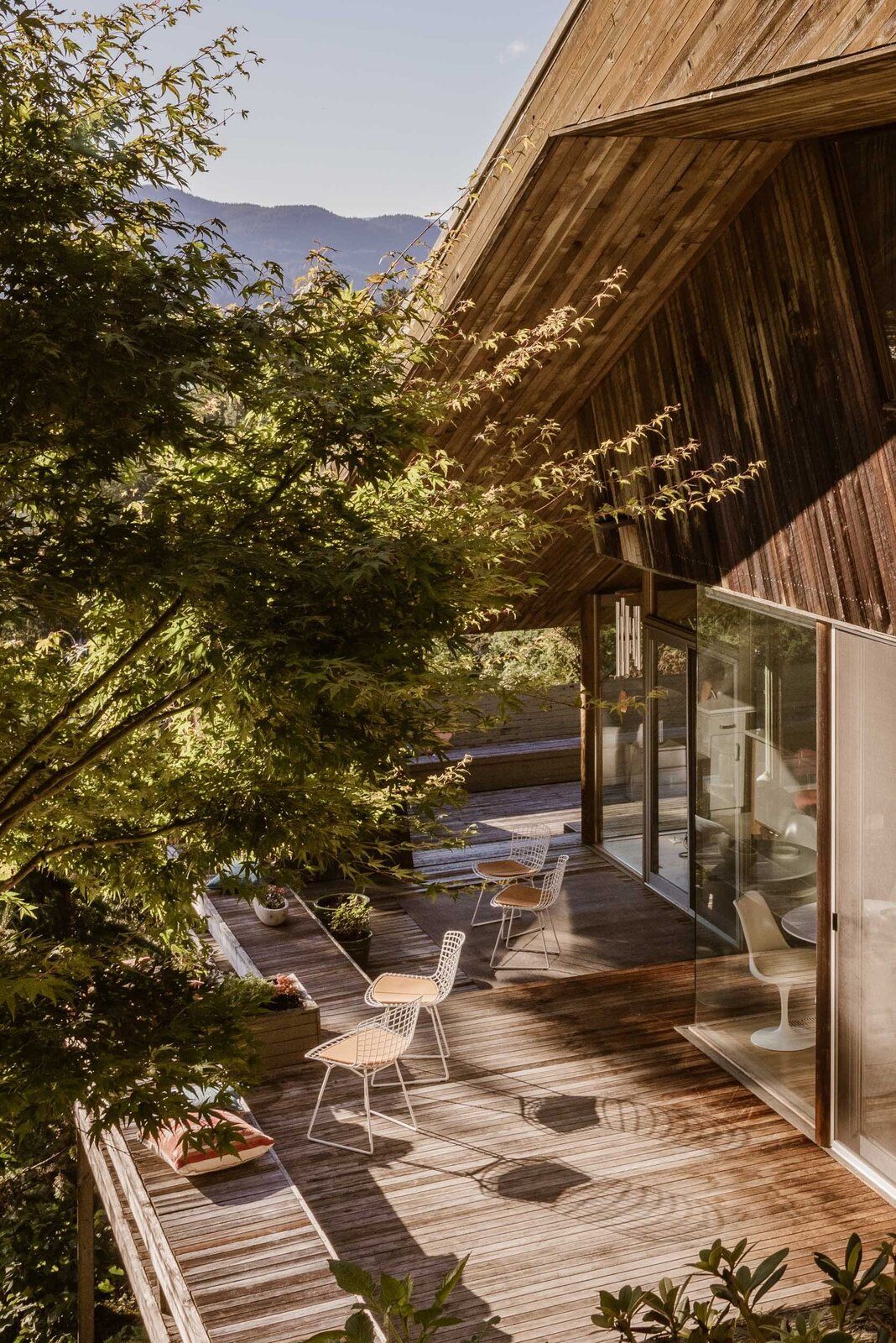 Trees provide welcome shade on the expansive deck that wraps the main floor.

Perched on a rock bluff high above the Salish Sea, the angular home-which Rodney has dubbed the Starship House-seems poised for take-off. A curved driveway leads to a covered carport and the main entrance at the rear of the building. A broad skylight follows the angle the roof and floods the entrance with light, coaxing the visitor down the stairs to the main level. Here, south- and west-facing windows and glass doors connect to a wraparound deck that provides a dazzling panorama of ocean, sky, trees, and sun. 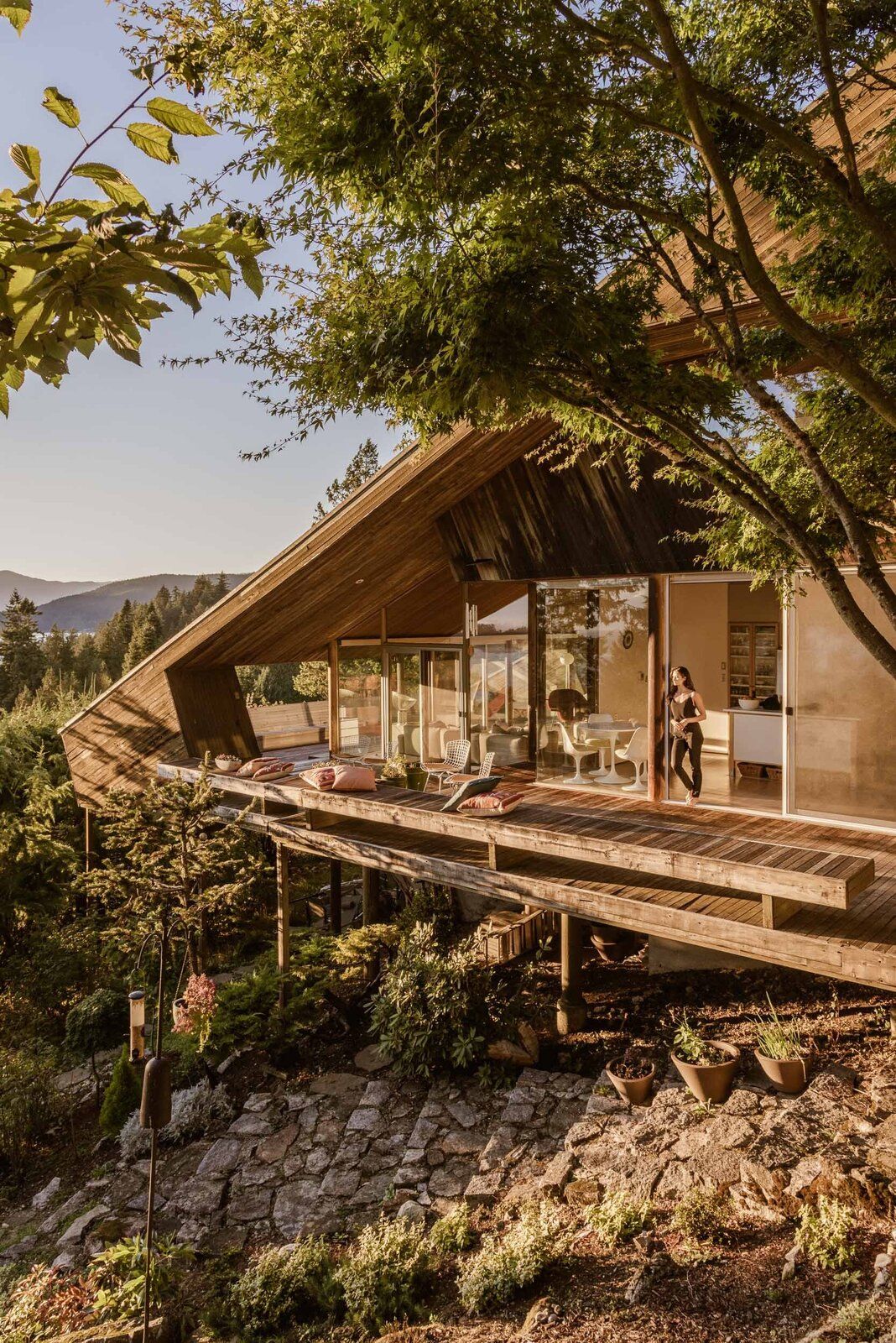 The kitchen, living room, and dining area flow freely throughout the main level, which also includes a primary bedroom which opens onto a north-facing deck. The most striking feature is perhaps the angular stone fireplace, which mimics the home’s rhomboid-inspired profile.

A skylight illuminates the stairwell leading from the foyer down to the main level.

The triangular fireplace, backed by a wall of glass, echoes the form of the home.

A second flight of stairs from the entrance leads to three upstairs bedrooms, one of which was originally designed as living space for the Cattons’ children. 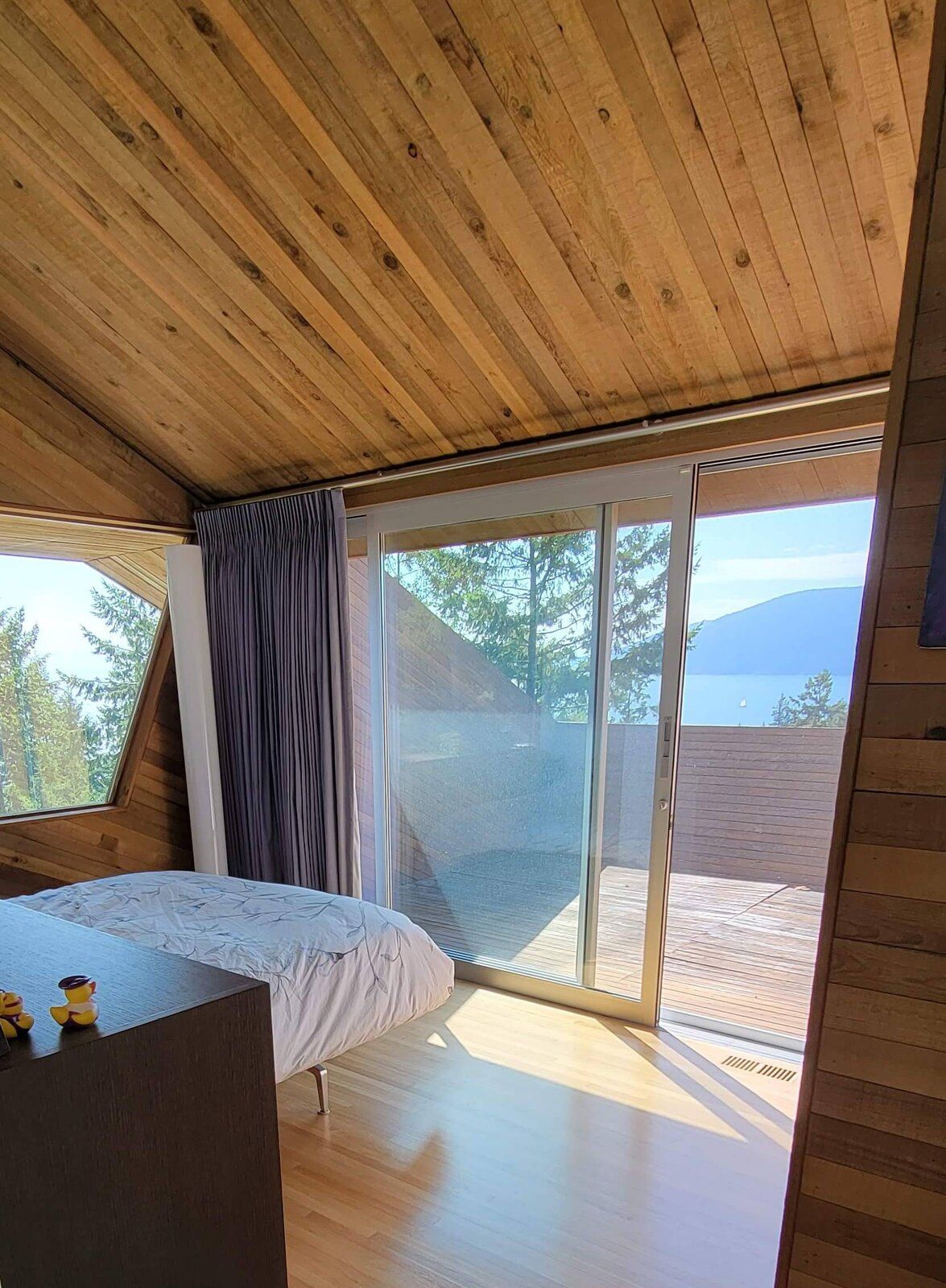 Two of the upstairs bedrooms lead onto private decks.

This is the second Erickson listing for Rodney’s agency in 2021. "Vancouver has flown a bit under the radar for midcentury modern enthusiasts," he says. "But we're receiving expressions of interest from all over the world. Our challenge is finding enough inventory to keep up with demand."

It took over two years for Arthur Erickson to design and build this West Vancouver home for two long-time friends back in 1968.