This week at the Tel Aviv airport: A woman who promotes vagina positivity and wants to make sex toys more accessible to Israelis, and two vacationers in search of a destination

Is this your first time abroad since the start of the pandemic?

No, I like flying during the pandemic. It’s cheap and everything is empty. This flight cost me 18 euros.

What do you do that you can fly so much?

I have a partner abroad. And also there are Burns – like Midburn or Burning Man. There are a lot in Europe, and I like them.

I like the art there, the type of people there – open-minded and very artistic.

Are you an artist?

And what’s your day job?

I have an internet store for sex toys.

How did you get into that business?

I wanted to make things more accessible: Whenever you go to a sex toys store, it’s all so dark. You go in and there’s someone you don’t feel like talking to, you don’t know what to ask, it’s unpleasant. But I was in Germany, for example, where there’s a Fun Factory, a huge store. Everything is pink, purple, colorful. Like a kind of candy store. You can touch everything. I said, ‘Hey, I want one like that back home.’ But in Israel it’s physically impossible to do something like that… so, online.

Because of the religion and culture, all that. I started by conducting workshops where people could touch the things, ask fearlessly what each product was. And then the coronavirus arrived, so instead of workshops I opened a store. I have unique products. Because I’m a vegan it was important to me for the store not to have leather items, and to carry vegan products. Like vegan condoms.

No one knows this, but no, they’re not vegan. They contain milk protein. So there are vegan condoms and vegan lubricants.

All this came from one visit to a store in Germany?

No, it’s since the Burn. I was in a Burn in Spain called Nowhere. In Israel you never see naked people. I was religiously observant in the past, but anyway in general, the model human body exists only in commercials. And when I see my body, it’s really different from what I see in commercials. In Spain people are freer when it comes to nudity, so suddenly you see all kinds of bodies of people – and walla, it’s like my body isn’t so bad. That realization made me want to talk about it, to share it. And I’ve started workshops to make vaginas, to show the variety of shapes. I have a workshop this evening.

What happens at the workshop?

Many women have never seen their own vagina, or they don’t feel comfortable with it for some reason or another. Again, what is the model people see?

So the workshop helps women connect to the vagina and see that there’s a variety. Just as everyone’s nose looks different, each vagina also looks different.

We make the models from plaster, and then we wait three hours for them to dry. So betwixt and between, they talk, reveal and share. And in the end we display them all and see all the diversity. It’s very exciting.

Each woman guesses which vagina she made?

We tried, but it doesn’t always work. Some identify it right off, some only find it because their name is written on it. It’s strange, like identifying a baby in the hospital.

When did you start going to Burns?

In 2017. Before that I was religious, with eight children. My youngest is 15, the oldest is 30. I got divorced and stopped being religious, and then I started to go to Burns.

Quite a transition. Were you already headed in that direction when you were a full-time mom?

When I was a mother, what interested me was being a mother. I did it the best I could. Now I’m investing more in myself. I’m doing everything I didn’t do, because I was a mother already at 17. I wasn’t born religious; I became religiously observant – that’s another change I made.

How are your children taking the new change?

They’re supportive. Sometimes they say, “You’ve traveled enough already, you don’t need to do it again.”

Yes. They’re like my parents. Five still live with me, along with three dogs and four cats. But that’s it; they won’t let me take in another cat. 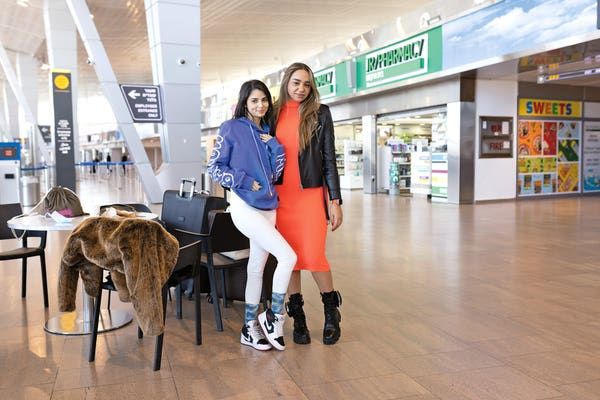 Hey, so who are you guys?

Esther: No one, just two girls from Rishon.

And what are you doing here?

Esther: We were supposed to fly to Prague. We finalized our plans last week, but we were misled. You need two vaccinations and we had done only one. We did a PCR test and everything, but they wouldn’t let us board. Now we’re looking for other flights.

Linoy: There’s a Czech site that says you can enter...

Linoy: There are flights today to Berlin, Athens and Budapest. We wanted a shopping destination.

Esther: You just don’t know what’s going to be with corona. For example, Berlin became “red” yesterday. It’s a bummer.

How long have you been at it?

Esther: We got up at 5 A.M., the flight was scheduled for 8:40 – we also don’t have a problem with a different destination, it’s just that we’ve packed for a cold one, so Dubai is out.

Tomer (the photographer): And you’re not going back home?

Esther: Right. We didn’t get up at 5 for nothing.

Can I ask what you do?

Esther: I am studying naturopathy.

Linoy: I’m leaning toward medicine, but it’s so hard in Israel.

And what’s the deal with your style?

Esther: Why, do we have a style? You didn’t see us at our peak!

What’s this? A purse on the boots?

Neat. What does naturopathy say about all that?

Esther: That’s something completely different. There’s nothing about the way people in my class look that fits me. It’s nice that everyone connects because of who they are and not because of the way they look.

Esther: Yes, really. Without shoes. They grow all sorts of lifeforms in a refrigerator. Like sourdough culture. It’s very different. But it’s good to meet people like that. You’re exposed to all the styles there are.

What does naturopathy say about corona?

Esther: Like with almost every disease, you look mainly at the mental side: the tension and anxiety it creates, and the disorders that emerge from all the stress, when there’s no routine and people don’t know what’s happening with them, with their livelihood.

Do you ever end up giving advice to the people around you?

Esther: Yes. There’s a tendency for people to hide things, so it starts with, “I have a girlfriend or a boyfriend ...” Mostly I get asked about eating disorders. In my opinion, 60 to 70 percent of all girls have serious eating disorders. A girlfriend told me that in her opinion there isn’t one who hasn’t tried to make herself vomit. I also tried a few times.

Esther: Yes. A lot of times you eat and feel like you’re bursting, so you try to find a solution. But I know the kinds of damage it can cause. Girls my age aren’t aware of it. They see some girl, am amazing bombshell, and say, “We want to look like her.” They aren’t aware of the cancer that can develop in the esophagus, or what will happen to them in pregnancy.

Esther: She also does modeling.

Linoy: I want less to be in that world. I like being photographed, but I am tending toward studies.

Esther: I’m more active now [online], because she has a boyfriend.

Linoy: When there’s a boyfriend, Instagram is less interesting.

Do you ever think about how you’ll look at things 10 or 20 years down the road?

Esther: Sure. At 18, I didn’t have a problem uploading everything I do, but today I am more selective. Success makes noise. There’s no need to share everywhere.

Linoy, what do you say?

Linoy: About what? Sorry, I have ADD.

And you’re going to study medicine.

Linoy: When it comes to studying, it’s something else. I have patience.

Fly to Budapest, lots of people from here are studying medicine there.

Linoy: That’s also a question. I have a boyfriend, and I see a future with him, thank God, and there’s a clash. He plays soccer here and can’t leave. So I can’t move abroad, get it?