If Boris Johnson is to win over the “Waitrose woman”, the mood among shoppers at one branch of the upmarket supermarket suggests he has got his work cut out. In Fulham, west London, many women say they are Labour or Liberal Democrat voters, while even his fans aren’t entirely sure they would vote for him.

“Waitrose woman” is a new voter demographic reportedly identified by the Conservatives as one that Johnson needs to win back in order to hold fast at No 10. According to their research she is middle class, southern and not a fan of Brexit or culture wars.

Perhaps in evidence of this, he gave an interview to Mumsnet this week, during which he was accused of being a “habitual liar”.

Outside the Fulham branch, situated in the Fulham and Chelsea constituency of the Conservative MP Greg Hands, Layla Powell, a chef, is on her way in with her Waitrose-branded tote bag. Powell says although she likes the prime minister and has met him, that wouldn’t necessarily translate to voting for him.

“To be quite honest, when it comes to politics I’m in-between,” she said. “As a person I like him. His policy, however, recently hasn’t been quite up to standard. I’m at an impasse. I’m not a Labour supporter and I’m not a Conservative supporter.”

While she considers herself middle class and somebody who would benefit from voting Conservative, she says the party is “not for the masses”. At the moment she is not sure that either one of the two main parties is better than the other, she says. “Maybe it is time to look at different parties. Maybe the Liberal Democrats.”

A Waitrose regular, she sees its shoppers as “predictably Conservative … Obviously price-wise it’s a little higher than Tesco or Sainsbury’s.” 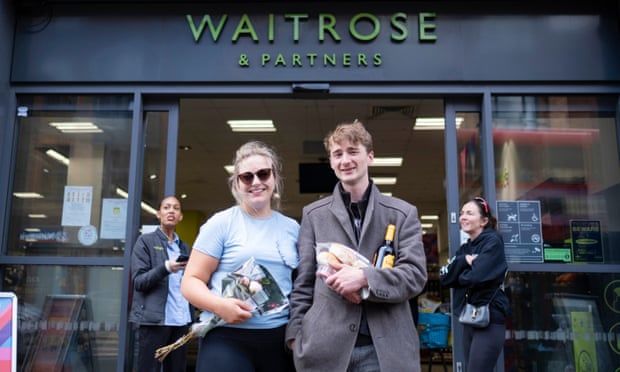 Coming out of the shop with her arms full of groceries, Yasmin Robinson, 25, is a Lib Dem voter and says she was “raised by a Waitrose woman”. But the sales manager from Fulham does not think most typical Waitrose shoppers are likely to vote for the Lib Dems.

She says Johnson is “not a very present prime minister” and describes herself as very disillusioned by politics. In fact, she is so unhappy with the current government that she was deterred from joining the civil service.

Her companion, Nick Love, 24, says he knows plenty of “trendy mum” Conservatives who have recently been put off the party. “A lot of the Tory mums I know would not vote Tory now,” says Love, a finance worker from Sussex. “Because they care about Partygate.” But he’s not sure whether it will lead to them vote for another party. “We’ll have to see.”

Mark Jennings, 58, a Labour-voting antique lighting restorer, and Ilona, 49, a sports massage therapist, say Johnson is a “liar” and “a disgrace”. “There’s nothing good about him,” says Ilona.

Amy Butcher, 37, a teacher who votes Labour, says of the Tories and Johnson: “We’re not their biggest fans, are we? I just think that he’s only out for himself and his friends.”

But she thinks Waitrose is the wrong place to start if he wants to increase support. “I think they need to get into the real world and see real people, go and speak to some people at the food banks. Speak to the people who are deciding whether to heat or eat.”

Hilde Rodriguez, 73, who is retired and lives in West Kensington, says she doesn’t consider herself a “Waitrose woman” but that as a Conservative, Johnson has her support. “No issues will make me change my mind,” she adds. 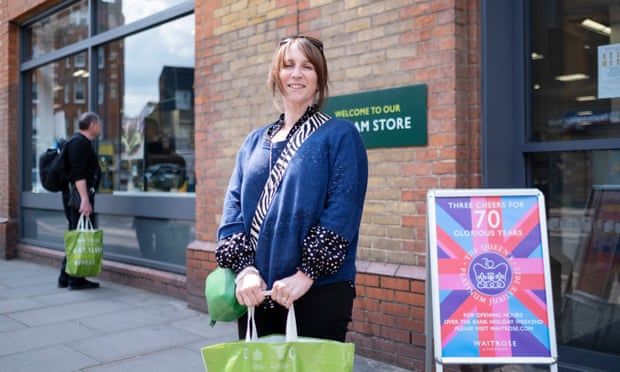 Stephanie Colman: ‘I wouldn’t want to do his job, somebody’s got to do it.’

Stephanie Colman, 51, buying picnic ingredients and “usually a Co-op person”, is also sympathetic to the prime minister. The hairdresser from south-west England says: “I wouldn’t want to do his job, somebody’s got to do it.”

She thinks Johnson is “astute” and “plays the fool quite well when he needs to”, and any problems are down to his wider team. “It takes more than one person, doesn’t it?” she says.

She questions the term “Waitrose woman”, adding: “It could be a Waitrose man, the way the future’s going. Maybe that’s what he should be thinking about.”

A No 10 spokesperson said: “This government is focused on delivering for all parts of society including for women, from making sure women feel safe at night to ensuring they get the opportunities and pay they deserve at work. It was also the Conservatives that introduced mandatory reporting on the pay gap for large employers as well as shared parental leave and doubled free childcare for eligible parents.”

A spokesperson for Waitrose said: “I understand the Guardian have been talking to customers at our Fulham shop, so we’ll let them speak for themselves.”