Women and girls and persecuted minorities will make up the bulk of the Afghan refugees resettled in the UK, the home secretary has said.

While the Taliban said women's rights will be respected, Priti Patel told the BBC it was hard to believe "the PR operation that we're currently seeing".

The UK government will work with other nations and pledged to resettle 5,000 Afghans in the UK in the first year.

However, some MPs have criticised the scheme for not going far enough.

Thousands of Afghans have been trying to flee the country after the Taliban seized control of the capital Kabul.

The government has committed to resettling up to 20,000 Afghan refugees in the UK in the long term - and Ms Patel said she wanted the majority of those to be women and girls and persecuted minorities.

The Taliban have promised the rights of women in Afghanistan will be respected "within the framework of Islamic law".

But the home secretary said the group had a history of oppressing women and "that's not going to change overnight".

"I genuinely do not think that we should be at all believing the spokespeople or the PR operation that we're currently seeing," she told BBC Radio 4's Woman's Hour.

Appearing on BBC Breakfast, Ms Patel refused to give a timescale for how long it would take for the 20,000 Afghans to be brought to the UK.

However, she compared the new scheme to one introduced for Syrian refugees, which saw a similar number of people resettled over a period of seven years.

"We could end up bringing many more [than 20,000] but first of all we have to have the underpinning and the infrastructure and the support to do that," she said.

She said a target of 5,000 in the first year was "deliverable", adding: "It would be terrible quite frankly to bring people and not be able to give them the support that they would need in terms of accommodation, resettlement and giving them the opportunity to build a new life in the UK."

Downing Street also said the 5,000 figure was "not a hard cap" but based on expectations of how many people would be able to leave over that time period.

Asked how the UK would get vulnerable people, who may not feel safe leaving their homes, out of Afghanistan, Ms Patel said ministers would work with third party agencies, humanitarian organisations and other governments, including the US and Canada.

She added that people could also be resettled from neighbouring countries, as well as Afghanistan itself.

Meanwhile, Parliament has been recalled and Prime Minister Boris Johnson has been updating MPs about the situation in Afghanistan.

He said the government would be doing everything it can to support those who have helped the UK mission in Afghanistan and to "avert a humanitarian crisis".

Ministers have been rushing to put this scheme together in response to the situation in Afghanistan, with the final details signed off on Tuesday.

Information on how to apply is expected soon.

But ministers acknowledge the practicalities of getting people out of Afghanistan will be considerably more complicated because of the extent of Taliban control.

Government insiders don't know the extent to which the new regime will allow people to flee if they so choose.

There will be funding for the resettlement programme - and the government will work with local councils and devolved governments on where to house Afghans who come to the UK.

The scheme has faced criticism from opposition parties and some Conservative MPs.

Tory MP Tobias Ellwood, chairman of the Defence Select Committee, told the Daily Mirror it was a "woefully inadequate response", citing the government only aiming to help 5,000 refugees in the first year when "the threat is at its greatest".

Labour leader Sir Keir Starmer said the target of resettling 20,000 Afghans was "too small" and had been "plucked out of the air".

Lib Dems foreign affairs spokeswoman Layla Moran agreed that "20,000 should be the starting point of this scheme, not the target".

Refugee charities welcomed the announcement as a positive first step but said the timeframe was too slow and eligibility for asylum should be expanded.

Among those hoping they might get help to leave Afghanistan through the scheme is a former teacher in Kandahar.

The 21-year-old woman - who the BBC is not naming to protect her safety - fled for Kabul after the Taliban captured Kandahar but said she was now too afraid to leave the house.

"I was working with an educational organisation - the Taliban, they do not accept these things," she told BBC Radio 4's Today programme.

"Now I do not feel safe at all... I'm just like a prisoner in the house now."

She said Afghans needed help to escape now - and if she had to wait years for help it may be too late.

"We are in the situation that we cannot guarantee our lives for tomorrow," she said.

"Will I be alive tomorrow? We cannot guarantee that." 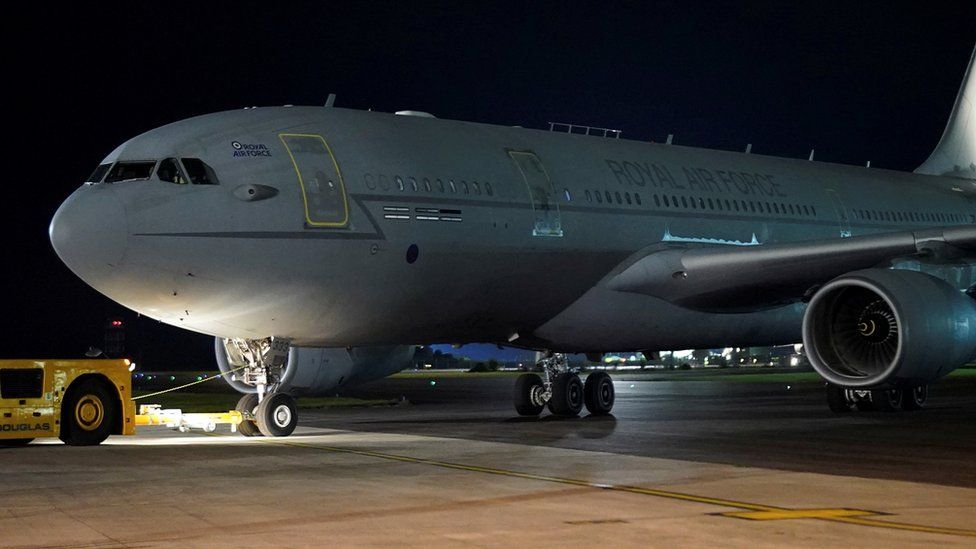 The new plan is on top of an existing scheme for interpreters and other Afghans who have worked for the UK government - the Afghan Relocations and Assistance Policy (ARAP).

Some 5,000 Afghans and their family members will come to the UK via that scheme this year. Nearly 2,000 have arrived since 22 June.

The UK has already sent about 900 troops to Afghanistan to help evacuate British nationals and Afghans who are eligible to resettle in the UK.

Chief of the Defence Staff General Sir Nick Carter said seven more planes were being sent to Kabul and the UK hoped to fly out 1,000 more people on Wednesday.

He told the BBC that British forces were collaborating with the Taliban, who were providing security around Kabul's airport.

Sir Nick said the Taliban seemed prepared to allow people to leave the country at the moment but "we need to be clear that this is only possible if they behave in a reasonable fashion".