Some artworks are conversation pieces. Others completely change the discussion. Falling into the second category is a museum-quality stained-glass window that recently found its way to an oceanfront house in South Florida. The window, which Helen Gould, daughter of the Gilded Age railroad baron Jay Gould, commissioned from Tiffany Studios in 1910, was acquired by the homeowner mid-renovation, causing quite a flurry in the entrance hall, where it was set over the staircase.

Interruptions like this do not seem to faze Rodney Lawrence, the New York City–based designer who transformed the six-bedroom residence into a luxurious tropical retreat. Lawrence reconfigured the entrance hall millwork to make room for the window (the custom trim had been freshly fabricated and installed, but please, this is Tiffany). A chandelier, initially meant to be a focal point, was swapped out for a custom fixture by the lighting designer Michael McEwen that glowed in an interesting but not attention-hogging way. And the front door was repainted for a little side dazzle, though the sunburst pattern in the transom was removed. “Certain things needed to lighten up and certain things needed to get stronger,” Lawrence says. 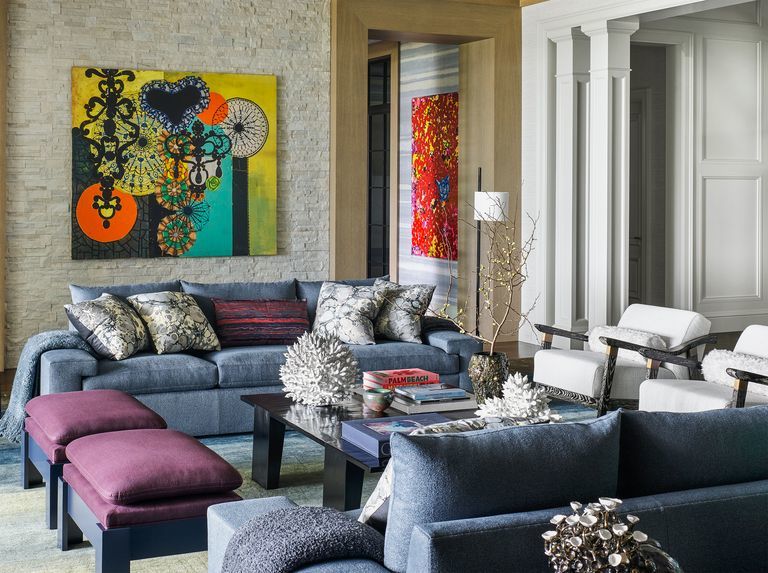 In the living room, the cocktail table is vintage Wyeth, the sofas are by Dmitriy & Co., and the benches are by James Duncan. The chairs are by Kimberly Denman, the lamp is by Roman Thomas, and the artworks are by Beatriz Milhazes.

The project, an encore collaboration between Lawrence and a longtime client who had relocated to Florida to enjoy a more relaxed lifestyle, represents a dramatic shift in its own right. The client at first intended to build a highly modern, ground-up home on property he had bought in the area. “We were quite deep into it,” Lawrence says. They decided to transform an existing residence instead to reduce the timeline—though ultimately the renovation required two and a half years to complete. “Basically, we touched every surface,” he says.

The starting point was a spec house that was “not your typical Mizner, Spanish-style house,” Lawrence says, referring to South Florida architecture designed by the prolific and influential revivalist Addison Mizner in the early 20th century. He and his client liked that the 15,000-square-foot building had non-Floridian features such as paneling and columns. And they especially appreciated the way it flowed, how the spaces opened up to each other. “You could stand at one point in the kitchen and see all the way through to the billiard room on the other side of the house,” Lawrence says. 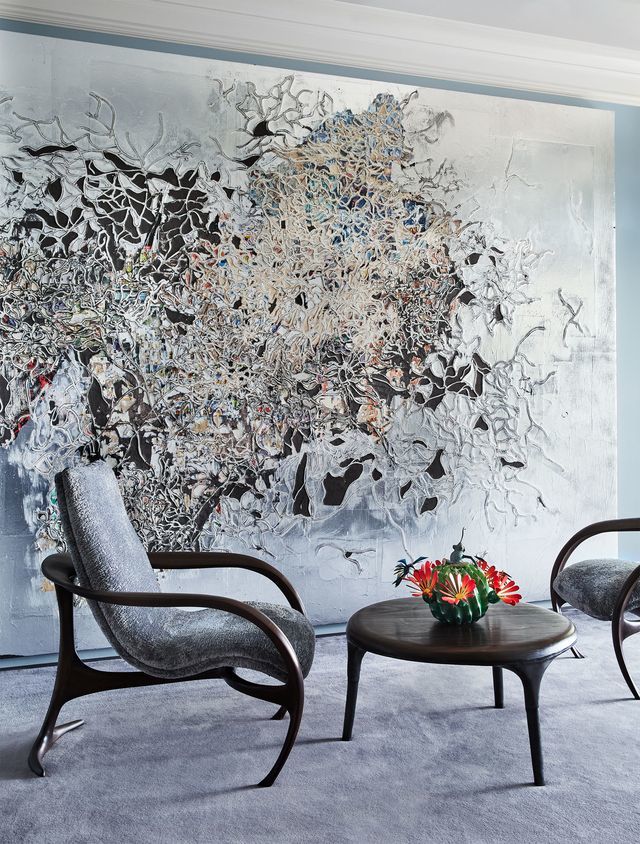 In the home office, the chairs are by Vladimir Kagan, and the artwork is by Mark Bradford.

Less appealing were the fixtures and finishes. Lawrence and his client upgraded and personalized almost everything, modifying the profiles on trim and the proportions on ceiling coffers (though they kept a hammered marble living room wall, which sets off one of the home’s colorful paintings by the Brazilian artist Beatriz Milhazes). They had kitchen and bathroom cabinets rebuilt, changed out plumbing, and applied a gloss to the underside of the staircase so it looked like painted wood and not ho-hum plaster. 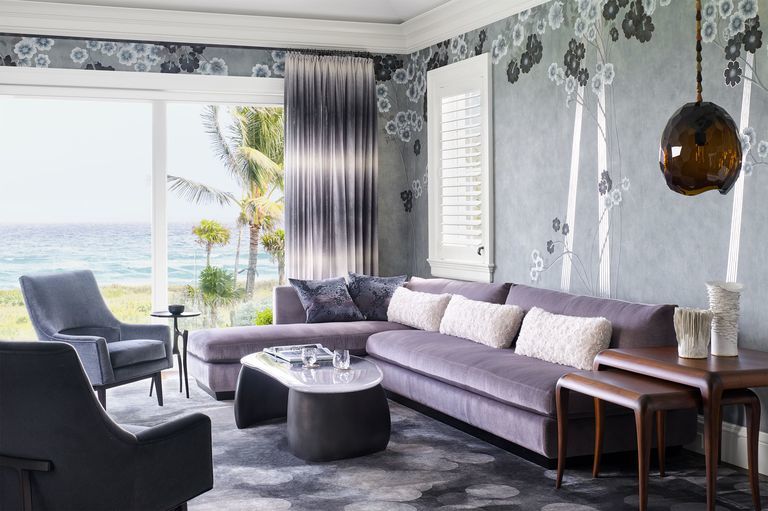 The sofa is by Dmitriy & Co., the cocktail table is by John Pomp, and the chairs are from Modern Living Supplies. The side table is by Holly Hunt, and the nesting tables are by Paul Mathieu for Ralph Pucci. The pendant is by David Wiseman, the wallpaper is DeGournay, and the curtains are from NY Drapery.

They ventured outside to jazz up two loggias with metal-framed transoms and sidelights. In one, a “very sad fireplace,” as Lawrence described it, was reclad in coral stone, and the ceiling was painted pale blue. Working with Ben Green of the Miami-based landscape architecture firm Raymond Jungles, they sourced pots for the grounds that would be filled with plants, while mature Florida thatch palms were transferred from another of the client’s properties. “We like to make it look as if it’s always been there, using larger plant material and doing layers,” Green says.

Indeed, the theme of layering is central to the home. Most surfaces—and many objects—are not exactly what they seem at first but reveal their depths in their own time: The bejeweled spectacle of the Tiffany window almost overwhelms the fawn that sips from a stream against a backdrop of foliage. There is gradual revelation in the Milhazes paintings, which are created with built-up sheets of Mylar harboring submerged forms under brilliant color. The oak millwork in the interior is composed of tonal layers—sandalwood on gray. All is in the service of a gorgeous complexity. 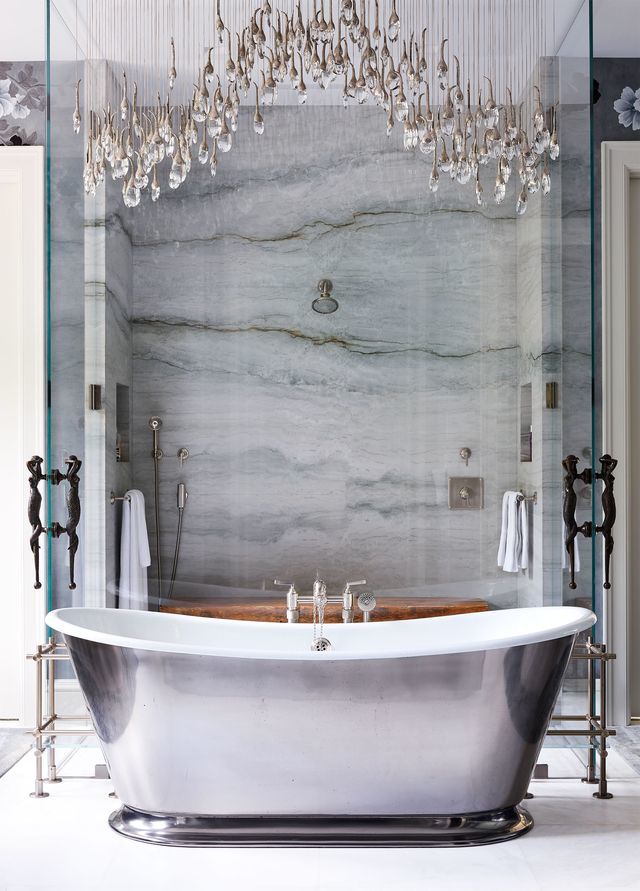 The primary bathroom’s tub is by Waterworks, and the chandelier is by Ochre.

One might think a commitment to layering would make it easier to alter one’s course in a renovation, but there is nothing haphazard about Lawrence’s work. So when his client fell for a giant canvas by the artist Mark Bradford, the designer had it craned through the office window and repositioned the moldings to allow it to hang on a wall there. He was luckier when the client lost his heart to another Tiffany piece—a rare lamp modeled on a dandelion gone to seed (it set the world record for a Tiffany lamp sold at auction, with a hammer price of $3.7 million). That, thank goodness, fit easily on a bookshelf.

Tour This Jewel-Box of a Home in South Florida 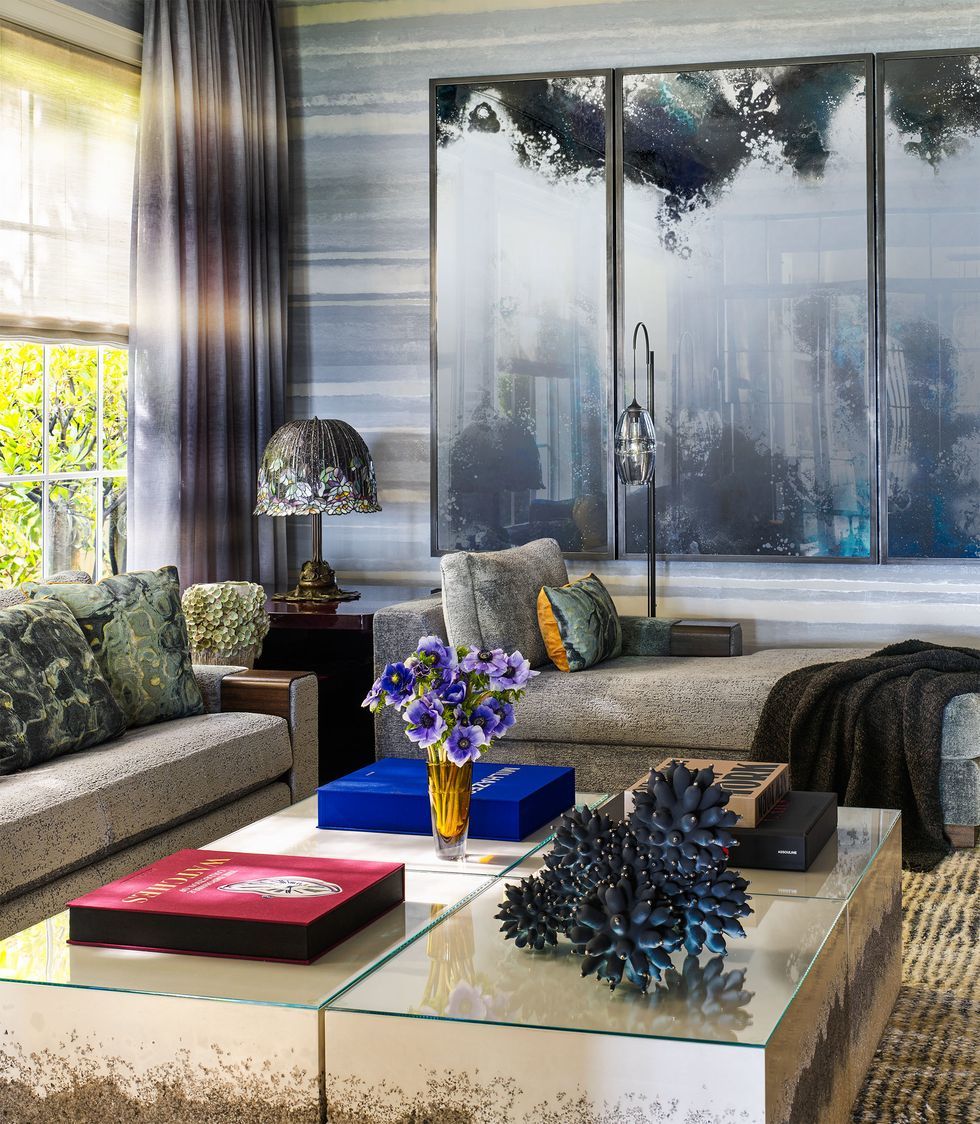 The cocktail table is by Fernando Mastrangelo, the chaise is from the Bright Group, and table lamp is by Tiffany Studios. The wallcovering is by Callidus Guild, and the triptych is by Tom Palmer. 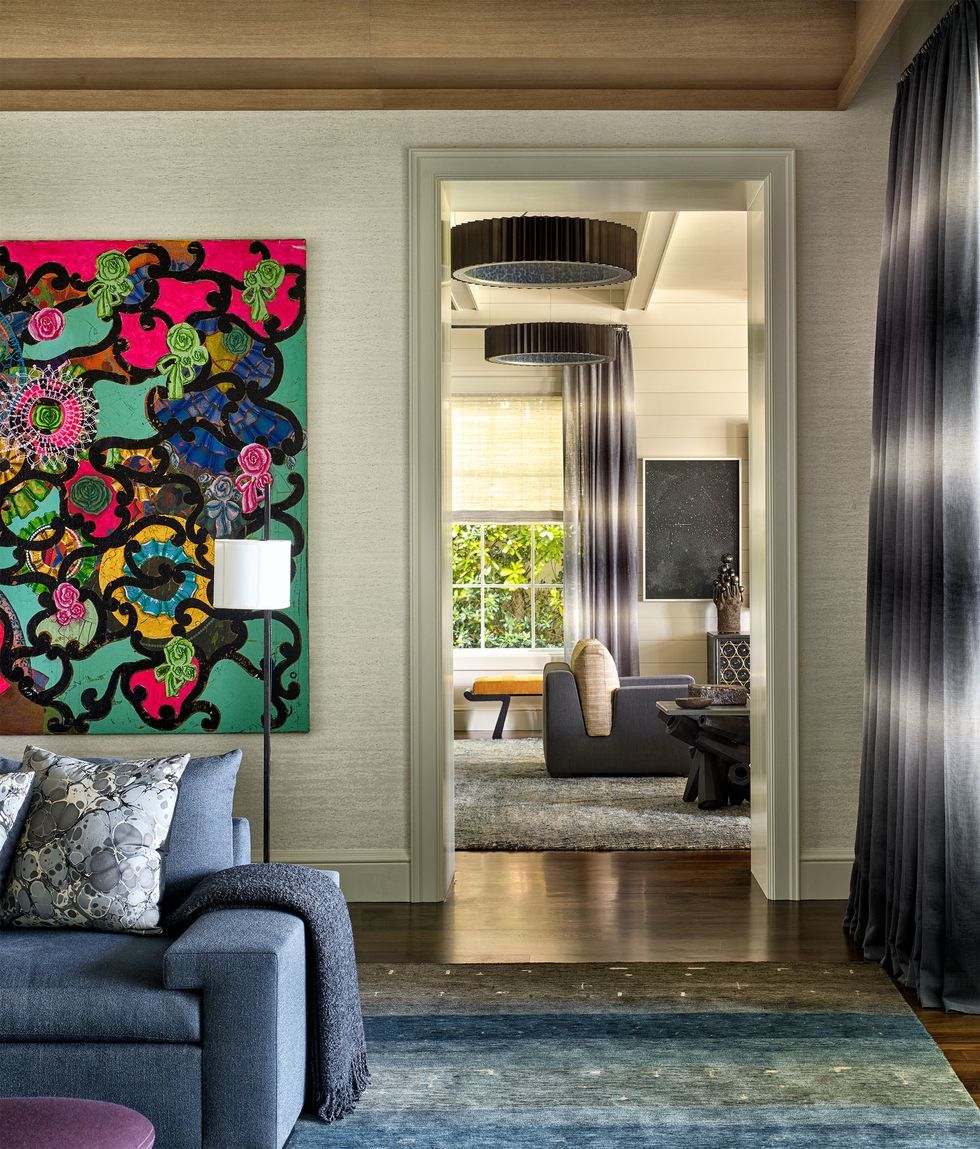 Living and family rooms : The sofa is by Dmitriy & Co., and the artwork is by Beatriz Milhazes. 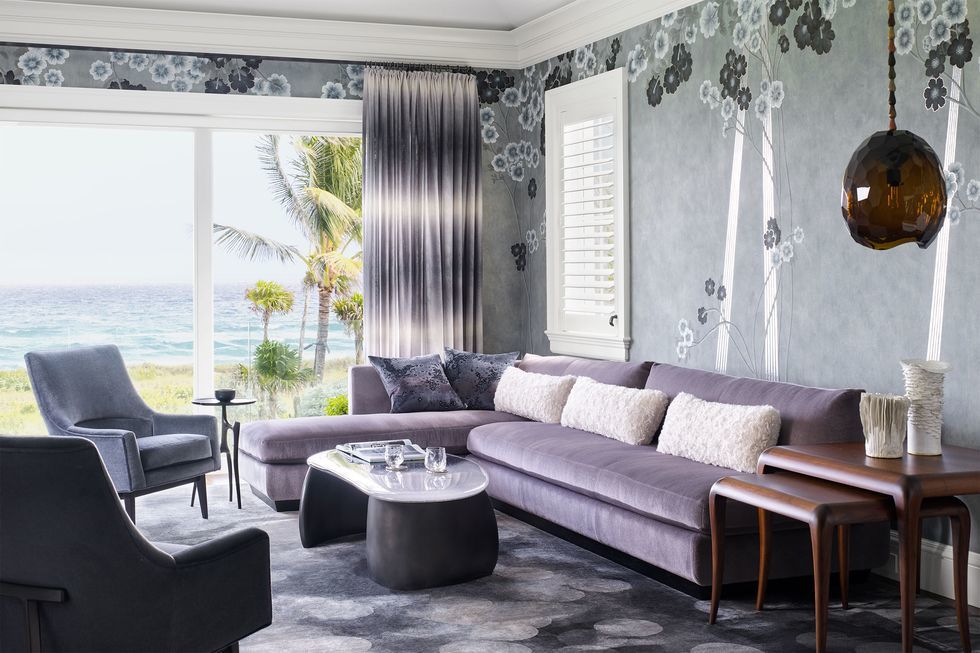 Primary bedroom sitting area : The sofa is by Dmitriy & Co., the cocktail table is by John Pomp, and the chairs are from Modern Living Supplies. The side table is by Holly Hunt, and the nesting tables are by Paul Mathieu for Ralph Pucci. The pendant is by David Wiseman, the wallpaper is DeGournay, and the curtains are from NY Drapery. 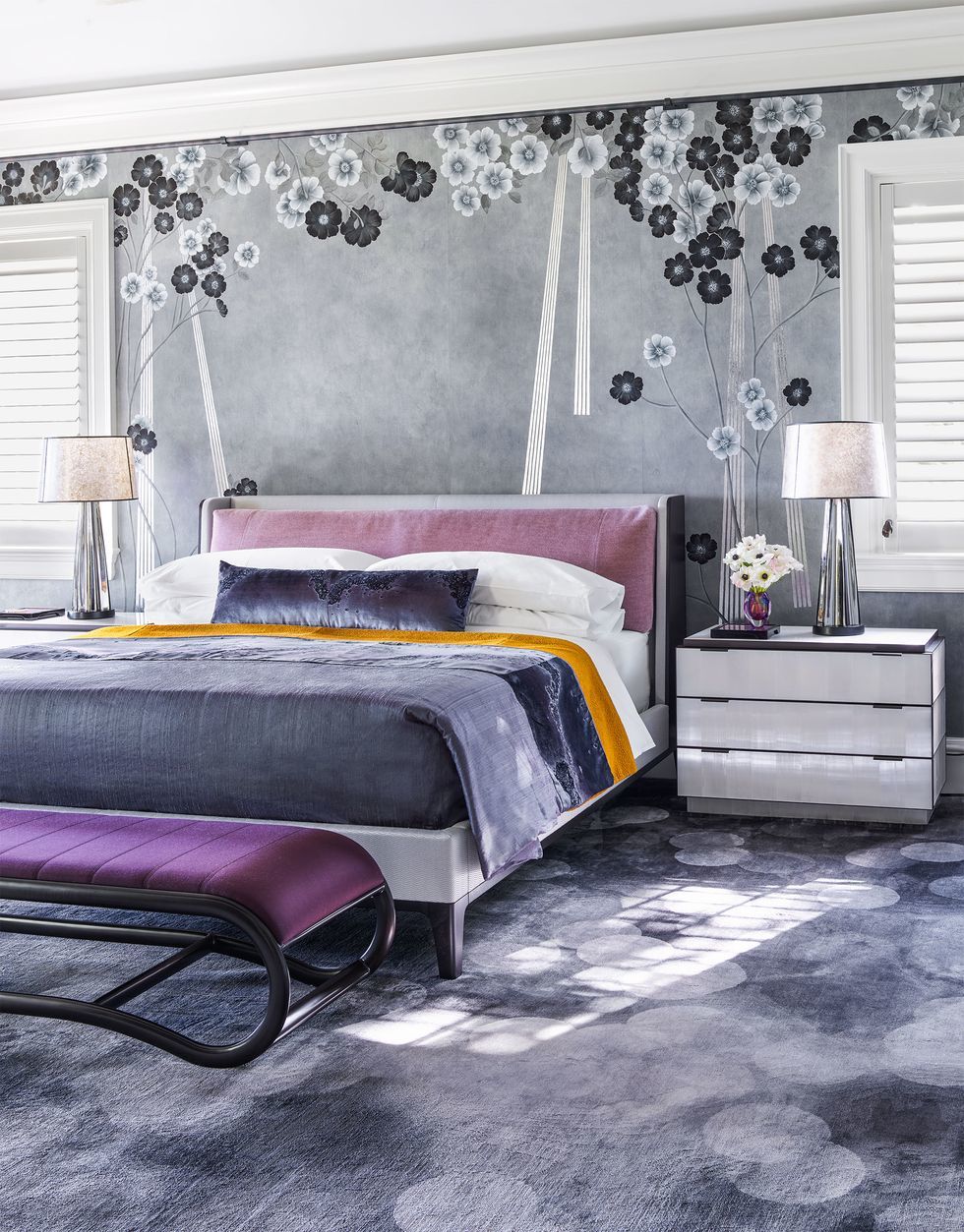 Primary bedroom : The bed is by Holly Hunt, the side table is by Jallu Ebénistes for Rune, the lamp is by Alberto Dona, and the bench is from the Bright Group.