A 1961 post-and-beam residence in Nichols Canyon cantilevers over the wooded hillside.

Six decades later, this three-bed, two-bath house in the Nichols Canyon area of Hollywood Hills offers the same irresistible combination of location and seclusion. Its asking price of $1,999,000 is a bit more than the original sales figure, but in 1961 a soft drink also sold for five cents. 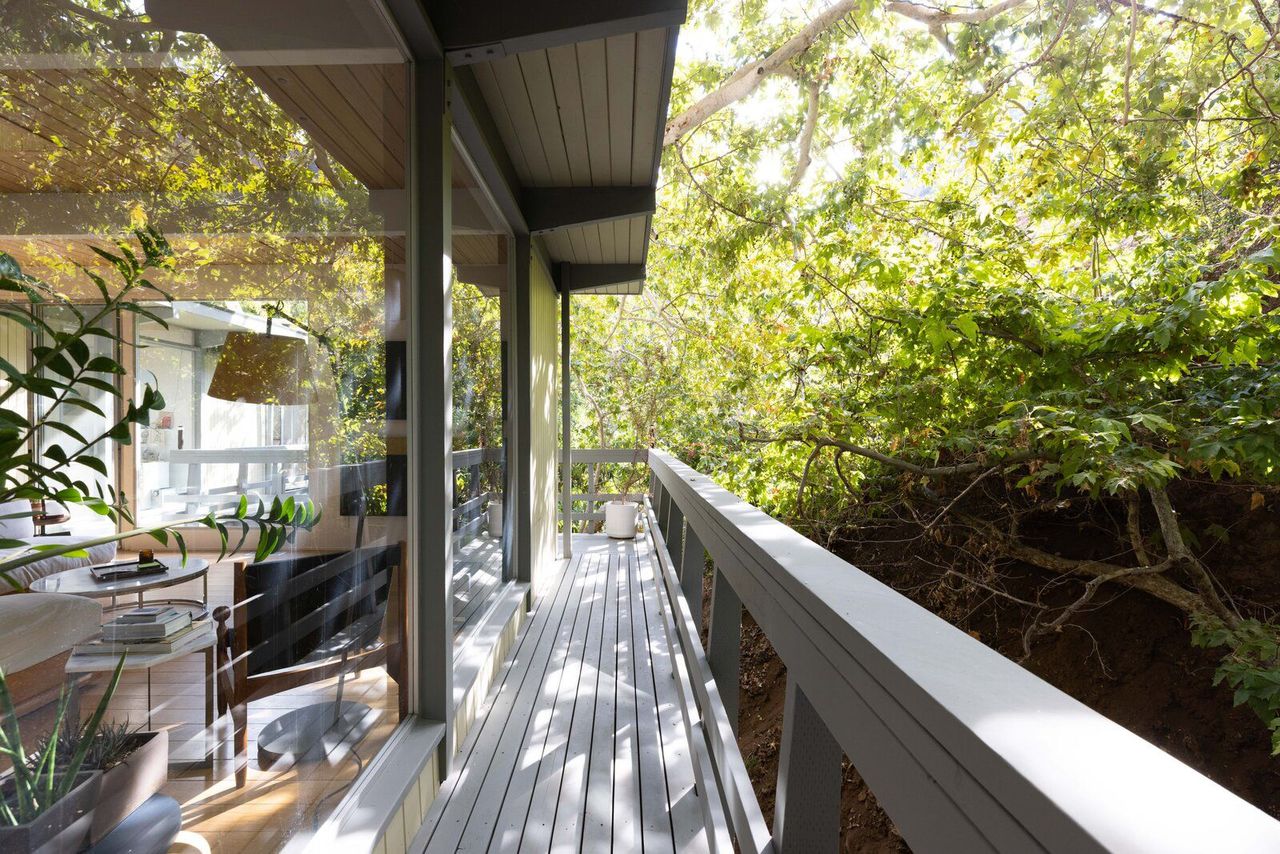 Mature sycamores stretch from the bottom of Nichols Canyon to envelop the house, filling the interior with dappled sunlight.

"It’s only about half a mile from Hollywood Boulevard," says broker Ryan Hanke of Figure 8 Realty, "but you feel like you’re a world away. It’s very integrated into nature. You feel like you’re right there in the branches of these giant sycamores."

A simple post-and-beam construction, the L-shaped, 1,872-square-foot house cantilevers over its hillside spot, with one whole end of the L-the living room-jutting out furthest. The mature sycamore trees come right up to the edge of the floor-to-ceiling glass walls, creating the sensation that there is no hillside at all: just a house built into the canopy. 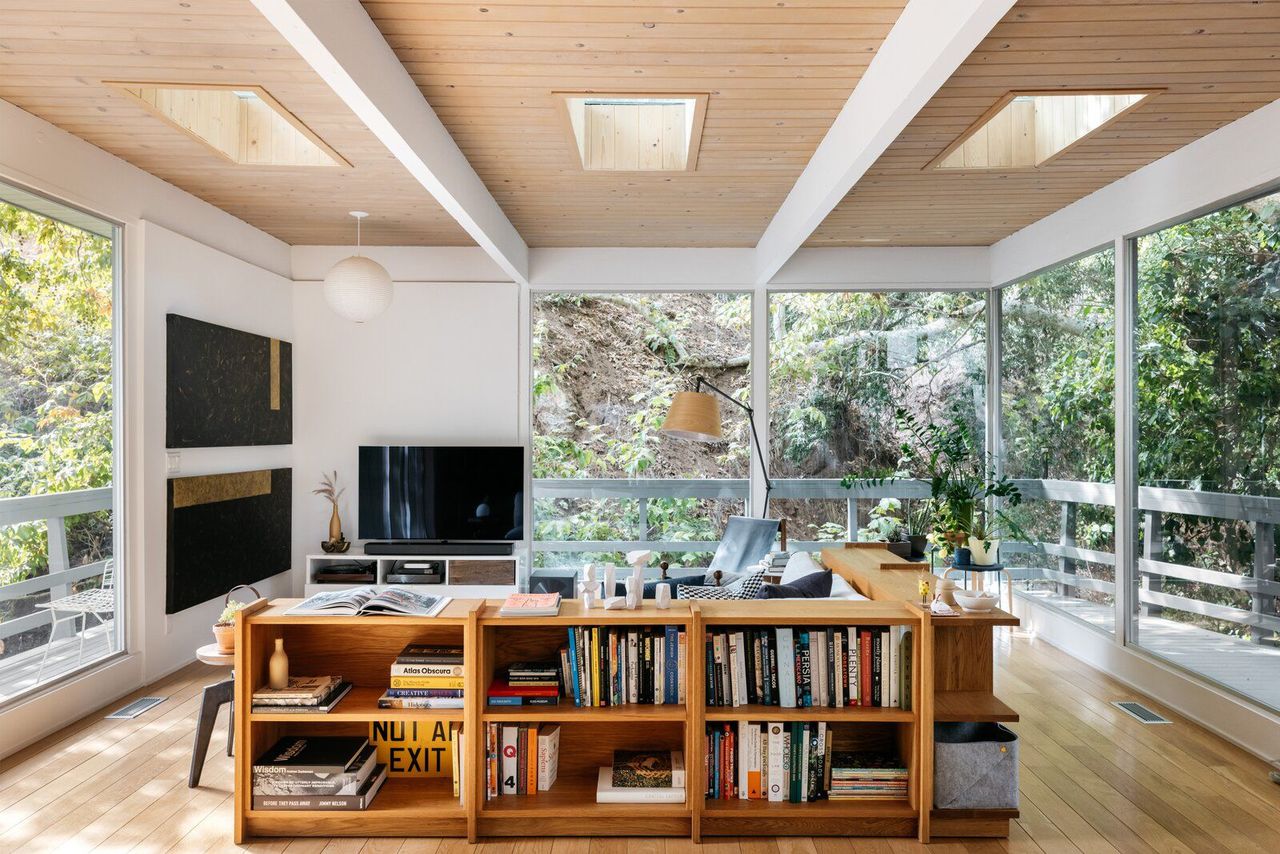 The living room was expanded in a previous renovation, further cantilevering toward the trees.

"When you walk in, the foyer is pretty unassuming, and you open up to this giant living room that's surrounded by the floor-to-ceiling glass. And I think a lot of the home is similar," Hanke says, "where you’re at first in a fairly constricted space, and then it opens up wide. It’s really well laid out, because there’s always these reveals happening." 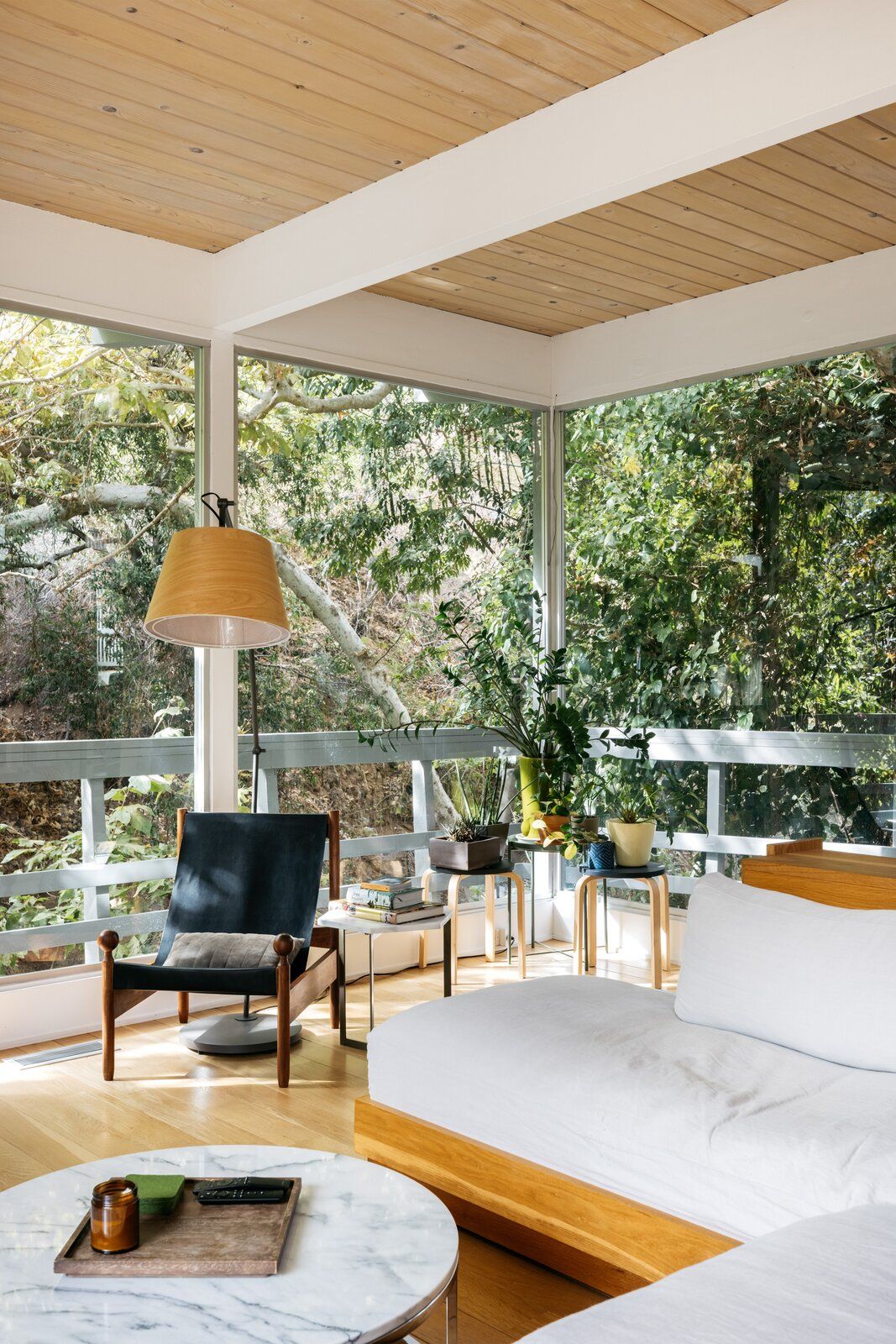 The home stays cool even in warm Southern California sunshine thanks to all the shade provided by mature trees and the canyon itself.

For an even more immersive arboreal experience, step outside onto the wraparound deck surrounding the west-facing living room and, around the corner, the bedroom wing of the house at its southern end. Yet that’s only the beginning of the home’s outdoor spaces, which also include a shaded courtyard and a lower deck near that creek mentioned in the old newspaper ad. 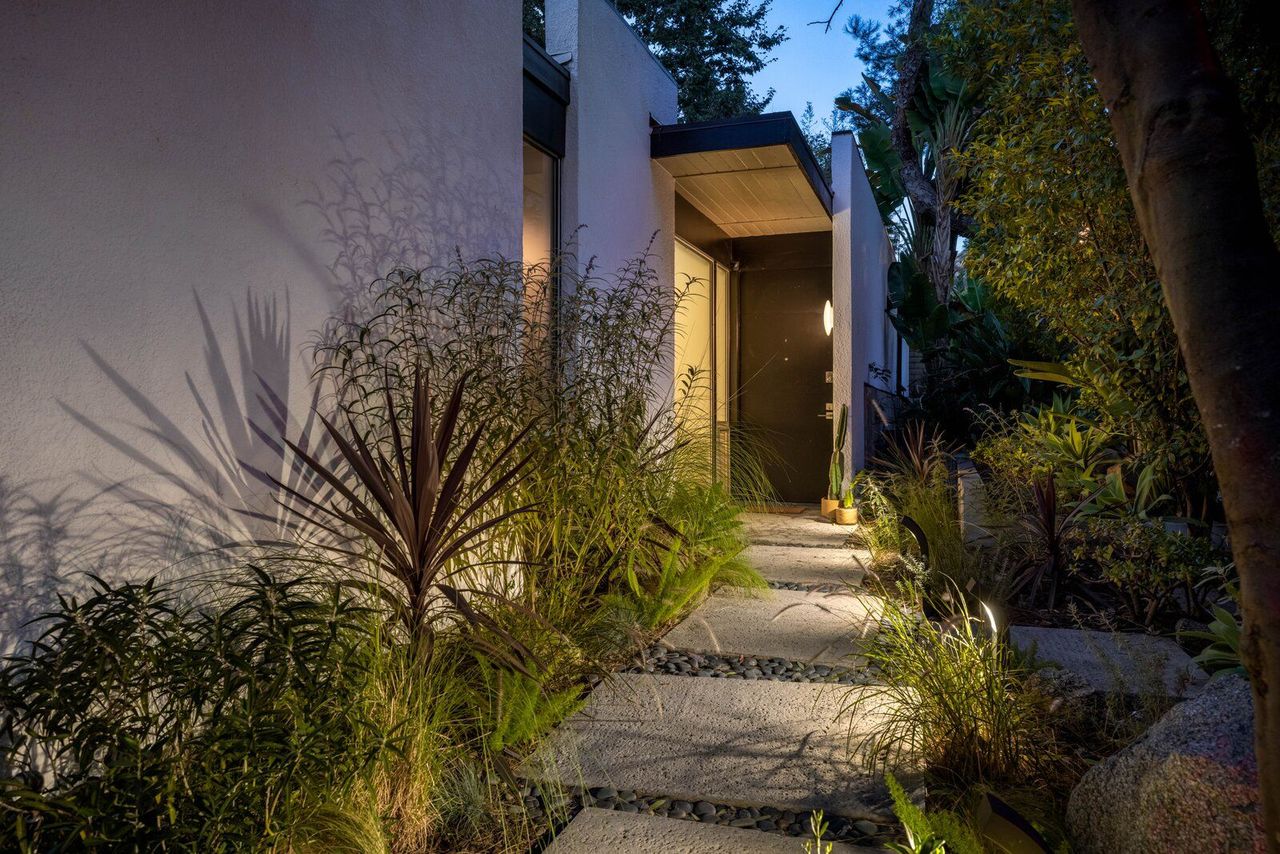 The home keeps a low profile as it greets the street, but its entry path is lined with lush plant life.

"After it rains you can hear the flowing of the creek from the house, and it’s pretty special," says Hanke, who is also a friend of the seller. "I was at the house getting things prepped recently, and we saw a family of deer on the hillside, just across the creek." 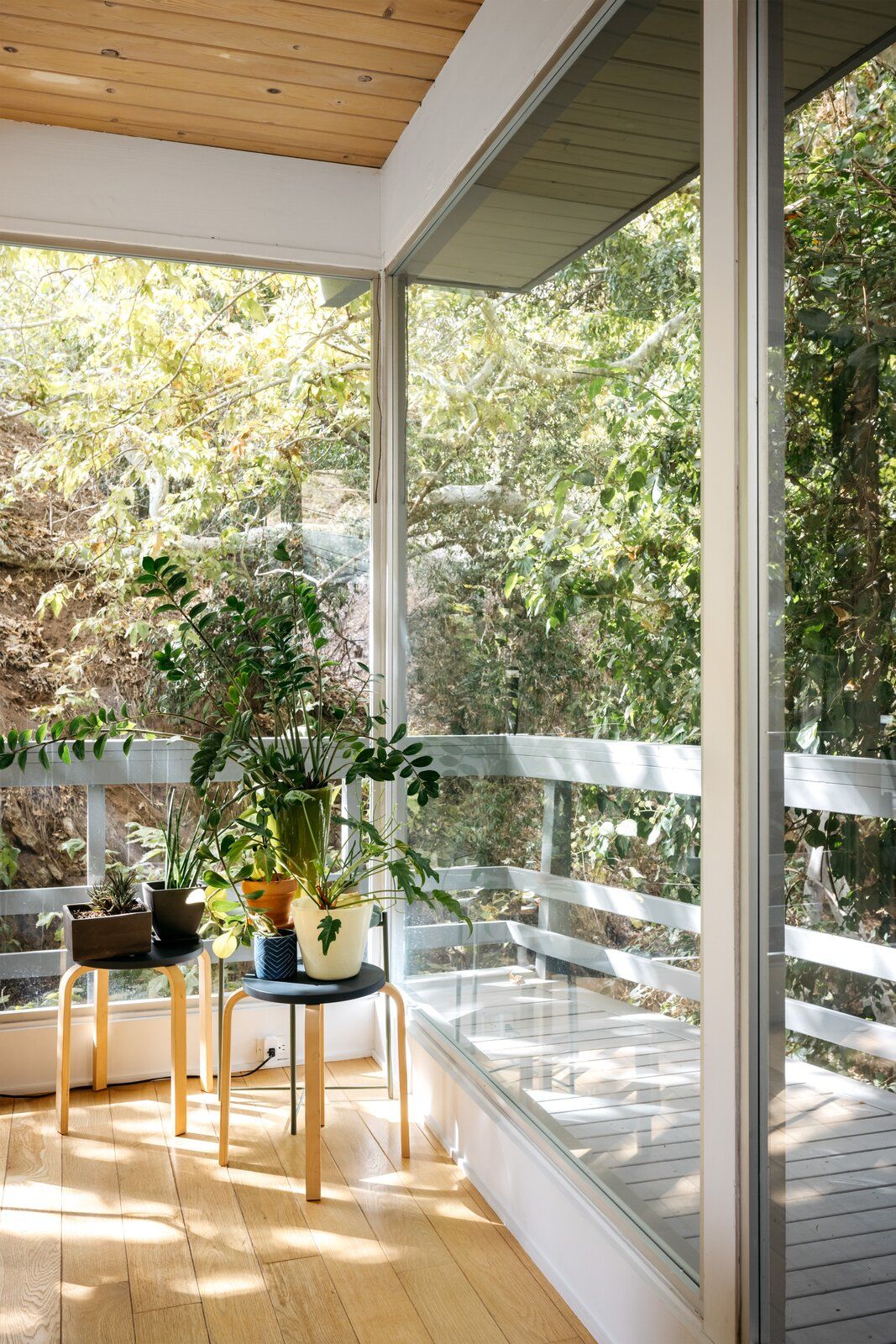 As mentioned in its original 1961 newspaper ad, when it rains a "babbling brook" can be heard at the bottom of the canyon.

Since its original 1961 construction, the house has been altered a few times, including a 1967 living room extension, a laundry room addition in 1998, skylights in 2012, and a kitchen/bathroom remodel in 2014. It’s perhaps that living room extension that makes the home particularly ideal for entertaining.

"My friend would host big dinners," the realtor explains, "and because it’s just one long rectangle of space, you can put in a very long table conducive for large groups." 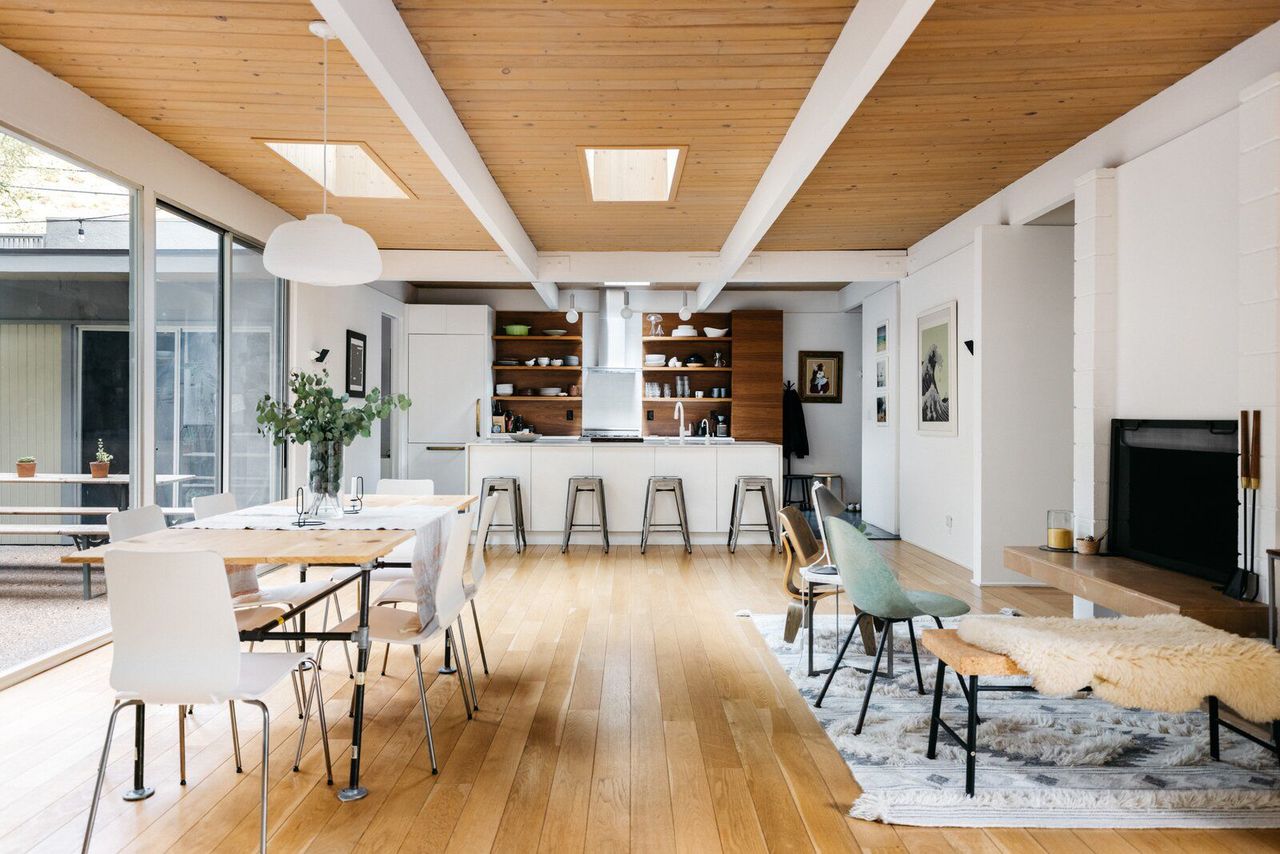 The listing compares this house to the Case Study Houses constructed from 1945-66 by architects like Richard Neutra and Pierre Keonig, which (with the help of Julius Shulman’s classic photographs) have become iconic.

This house, which records indicate was designed in-house by its builder, feels more modest yet also arguably warmer, primarily because it’s framed out of wood rather than steel. The wood floors and ceilings give the house a more natural ambiance that ties in with the trees just out of reach beyond the glass. 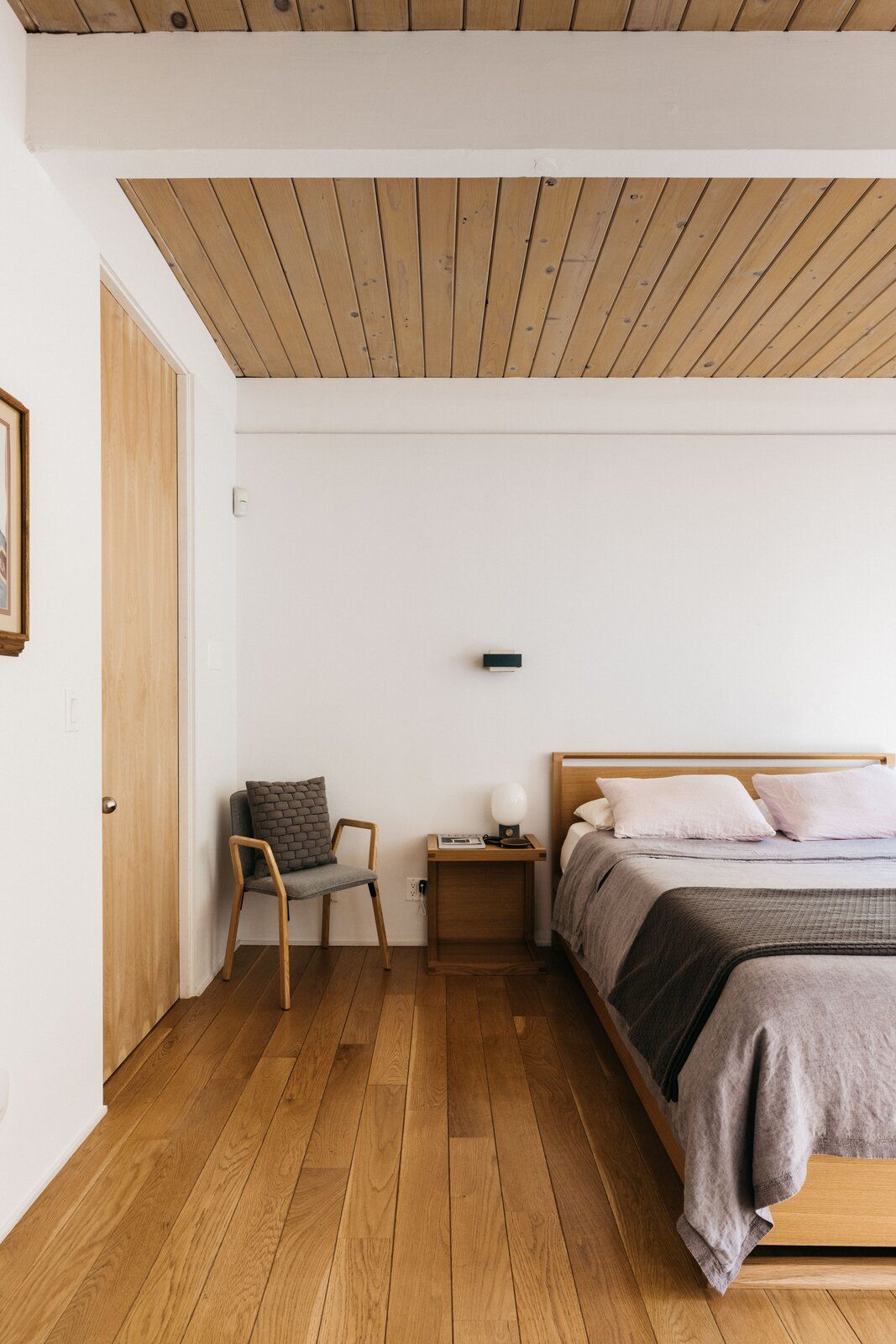 Wood floors and ceiling, part of the house’s post-and-beam construction, give the midcentury-modern design a sense of West Coast warmth and naturalism.

The wooded setting, in tandem with the higher elevation, help keep the house relatively cool in warm weather, and the canyon setting creates a nearly constant drama of light and shadow.

"You’ll be in the back and it’ll go dark with shadows because like the canyon is so tall," Hanke says, "and then you go to the front of the house, and the sky is still gold with daylight." 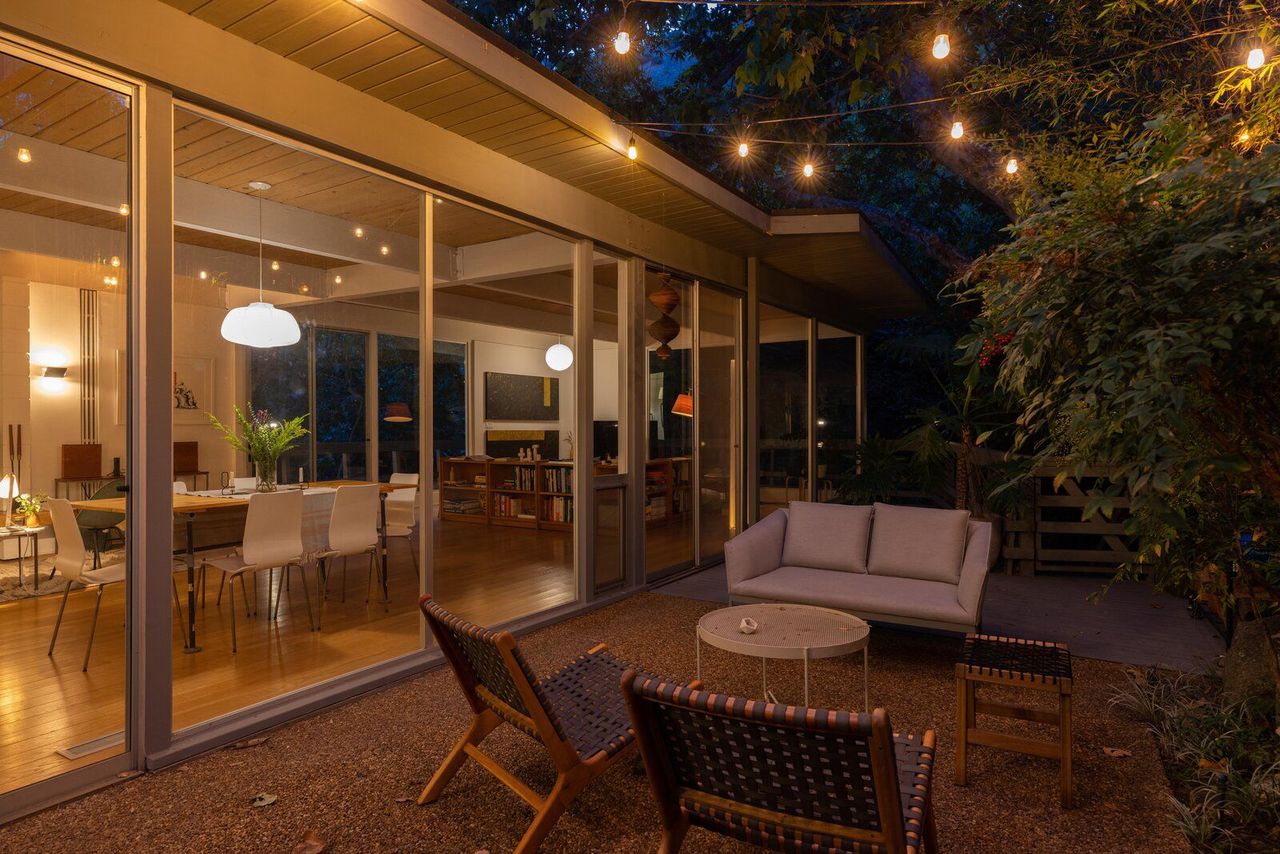 At night, it's easy to drift between indoors and outdoors, not only onto the cantilevered deck but also an adjacent patio.