More than 1,000 veiled women attended marches to promote Islamic values in cities across Pakistan on International Women’s Day in an attempt to counter pro-gender equality rallies.

In Islamabad and Karachi, well-attended “hijab marches”, organised by religious groups, competed with those participating in aurat – Urdu for women – rallies, which call for an end to systemic discrimination in the country.

The aurat march has been held each year on 8 March – International Women’s Day – since 2018, and organisers have faced numerous death threats as well as accusations of taking foreign funding to promote obscenity. 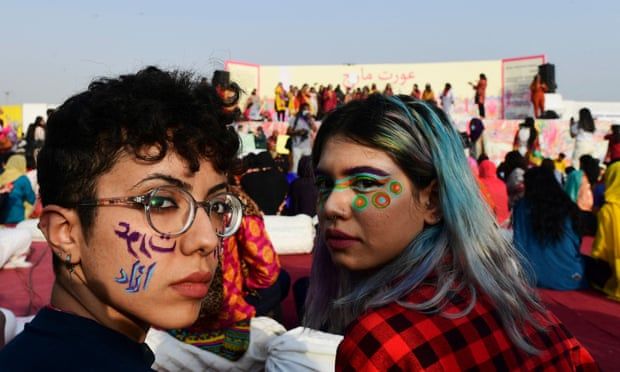 Protesters take part in an aurat rally to mark International Women’s Day in Karachi on 8 March 2022.

“Every year on our day religious Islamist parties threaten our march and oppose it, but Pakistani women will continue our struggle and we will counter this opposition for our rights,” said Farzana Bari, one of the aurat organisers.

Hira Ali, a university student from Islamabad, where men hurled stones at marchers in 2020, said: “The Islamists came out to suppress our voice and we will not allow them to oppose our right to protest and we own our public space.

“The perpetrators of violence against women often walk away without facing punishments and we will fight against the injustices,” she said.

In the past there has been controversy among conservative and religious circles over the slogans and placards used in the march, primarily: “My body, my choice” and “Stop being menstrual-phobic”.

Authorities in Lahore urged organisers to cancel the event there on security grounds, and threatened not to provide security for the marchers, but after a legal challenge in the city’s high court the march went ahead. 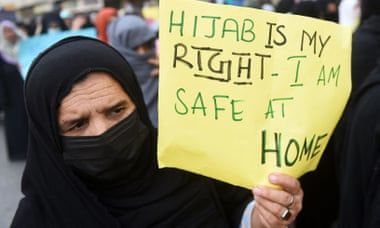 A woman puts her view across on International Women’s Day in Karachi on 8 March 2022.

Over the past four years the aurat march organisers have claimed victories for gender equality, for example last year’s ban on the “virginity test” for female rape victims in Punjab. But the flood of threats and online abuse have led march organisers to deactivate their social media accounts.