A woman died in a head-on crash while eating at the wheel, an inquest has heard.

Anna Ledgar, 28, had just bought a KFC and is thought to have been eating it when she drifted onto the wrong side of the road, hitting an oncoming taxi.

The gym manager was on her way to work at Macclesfield Football Club in her Seat Leon after stopping at a drive-thru for lunch on October 18.

The taxi driver whose vehicle took the full force of the impact recalled hearing a huge bang and feeling pain – then looked down and saw he was bleeding heavily.

He said: ‘The collision happened on my side of the road and I had no chance at all to take evasive action.’

A customer who was at the drive-thru behind Anna saw her collect her order and was behind her when her car suddenly drifted onto the other side.

It is believed Anna was eating a KFC when she died

Another motorist veered out of the way and says she saw a car ‘going up in the air’ in her rear view mirror.

They said: ‘I was in total shock at the time. If I hadn’t taken the action I did, the car would have hit me. She made no attempt to get out of the way.’

Witnesses called 999 and Anna was taken to Royal Stoke University Hospital where she died the following day from traumatic brain injury.

Boyfriend Greg Peters said it was unlike her to eat or drink while at the wheel and she had food with her to eat later that day so he was surprised she stopped at KFC.

However, police investigators found food on the car’s airbag.

Greg said the day before the crash, they had spent the perfect Sunday together and that he was planning on proposing to her. 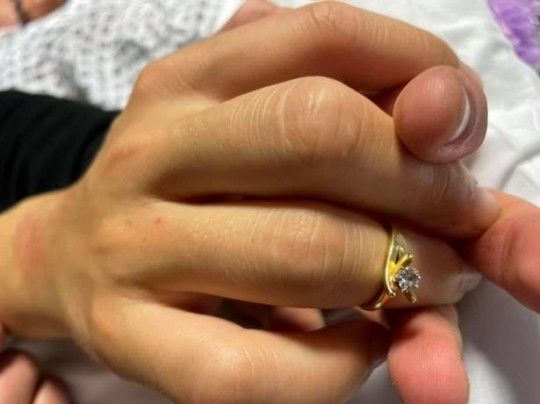 While Greg was with his unconscious girlfriend in hospital, a vicar gave a blessing and he placed a ring on her finger.

Anna had only started her job recently and was due to work a late shift that day.

Greg told an inquest that he kissed her goodbye at 6.30am and she went for a walk with their dogs. He then received a call at 2.30pm saying Anna had been in an accident.

In a tribute to her he said: ‘Anna was just an amazing person. All she ever wanted was the best for people. She wanted to help people achieve their goals – in the gym or just in life.’

Coroner Andrew Barkley concluded she died as a result of a road traffic collision.