The defence team of US basketball player Brittney Griner, detained in Russia on drug charges, has argued in court that she had used medical cannabis to treat pain from injuries, like many other elite international athletes.

A narcology expert summoned by the defence on Tuesday said that medical cannabis was widely used to treat athletes, and often had fewer side effects than other painkillers.

“With the prescription in place, Brittney may have used it for medical but not recreational purposes,” said lawyer Maria Blagovolina of the firm Rybalkin, Gortsunyan, Dyakin and Partners.

Griner, a Women’s National Basketball Association (WNBA) star who has played in Russia during the league’s off season, was detained at a Moscow airport on February 17 with vape cartridges containing hashish oil in her luggage. Medical marijuana is illegal in Russia. 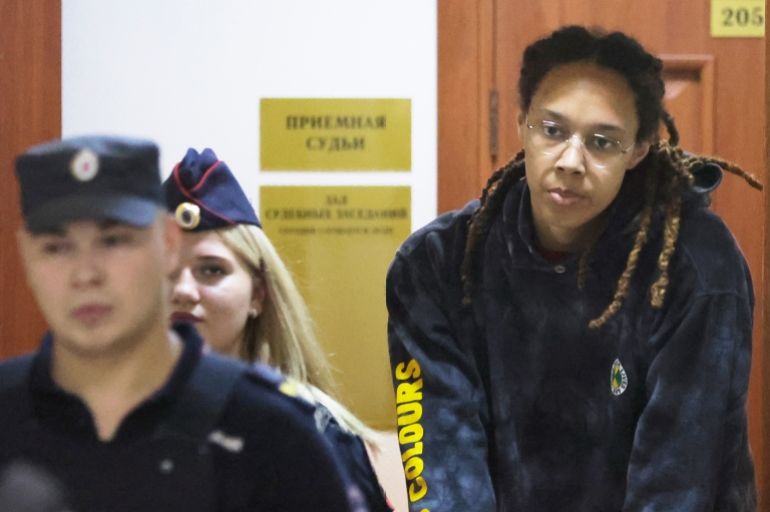 Brittney Griner has appealed to US President Joe Biden to secure her release, and the US  Department of State said is it doing everything it can to end her ordeal ‘as soon as can be possibly managed’

She faces a possible jail sentence of up to 10 years in a case that has highlighted the fraught relations between Russia and the United States at a time of heightened tension over Moscow’s military intervention in Ukraine. Some supporters contend she is being held in Russia as a pawn, possibly for a prisoner swap. American soccer notable Megan Rapinoe last week said “She’s being held as a political prisoner, obviously.”

Wearing round-rimmed glasses and a black and grey sweatshirt with “Black Lives For Peace” on the back, Griner listened to the proceedings via a translator.

Before taking a seat in the defendant’s cage, she held up a lined sheet of paper with pictures of her two best friends: a teammate, and her wife Cherelle wearing her #42 jersey from the Phoenix Mercury, her WNBA team.

The two-time Olympic champion, who has appealed to US President Joe Biden to secure her release, has pled guilty but denied she intended to break Russian law.

Griner – known as “BG” to basketball fans – will appear in court again on Wednesday, when she could be called upon to testify. A further hearing in the case is scheduled for August 2, Griner’s defence team said.

US officials and prominent athletes argue the 31-year-old has been wrongly detained and have called for her to be released immediately. The Russian authorities dismiss the US criticism, with the Kremlin saying the case has nothing to do with politics.

Elizabeth Rood, the US Embassy’s charge d’affaires, attended Tuesday’s court session. Griner “confirms that she is doing OK and as well as can be expected under these circumstances”, she told reporters.

ABC’s Good Morning America programme aired a producer’s brief interview with Griner in which she wished her wife, Cherelle, “good luck on the bar exam.”

When asked whether she had any complaints, she replied: “No, no complaints. Just waiting patiently.” She displayed photos of her wife, friends and teammates.