The UK capital was back in full swing this season, with a packed physical schedule and an electric atmosphere.

Determination was in the air at London Fashion Week, as the usual set of editors, influencers and celebrities braved Storm Eunice and some of the highest wind speeds on record in England, all in the name of fashion.

Spirits were high, masks were scarce and the shows were packed. More than 50 labels on the schedule chose to present in person, with the overarching theme for many catwalks being go big or go home. It spoke to a genuine appreciation of the craft, and a palpable desire for normality.

This year, billed designers were a mix of established and new talent. Savile Row's first black tailor Ozwald Boateng, for example, returned to London Fashion Week for the first time after a 12-year hiatus. But the event was largely skewed toward newcomers: Postergirl and Conner Ives made their runway debuts, while LVMH Prize-winner Nensi Dojaka staged her highly anticipated catwalk -- just her second ever solo show.

Although there was a healthy dose of make-believe on offer (James Walsh, a womenswear graduate from Central Saint Martins, fashioned a bustier and pair of shorts out of a tree trunk), the impending removal of coronavirus restrictions in the UK meant some brands left reverie at the door and kept one eye on commercial viability.

"When we started doing collections over the pandemic, it was just about fantasy," American designer Michael Halpern told CNN. "And now that we're going back to a collection where part of it will go into stores, you have to be mindful of both worlds." 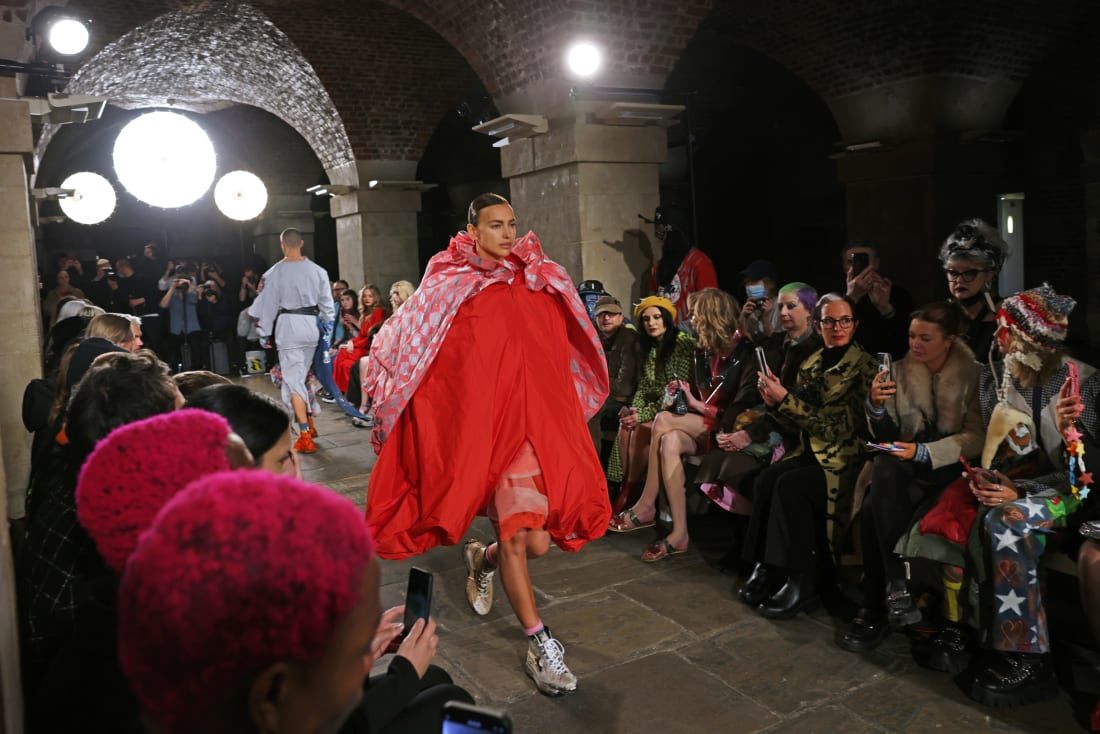 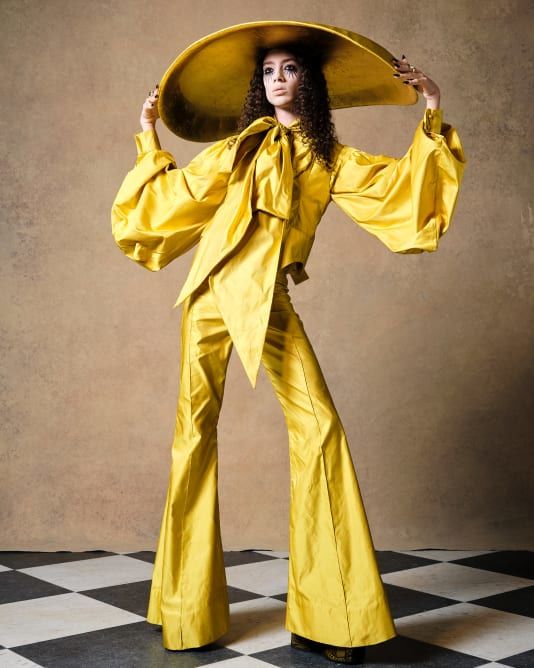 Harris Reed was inspired by the royal wardrobe and Elizabethan-era makeup. 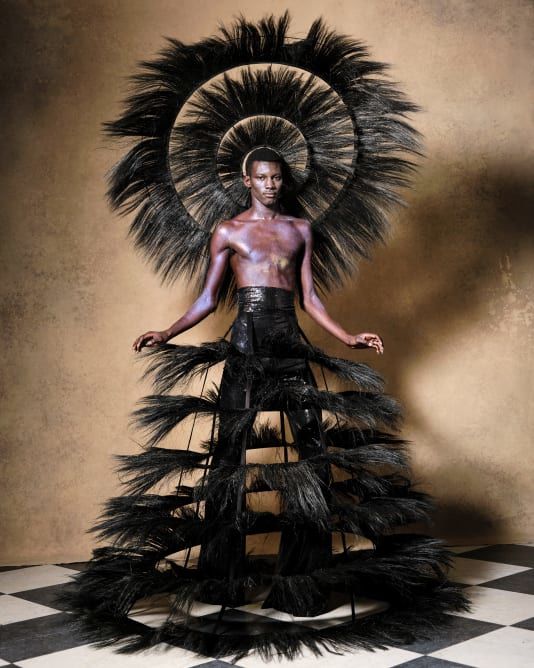 Reed's designs were "a queerer interpretation of kings...and kweens," according to the show notes.

The absence of fashion week heavyweights Burberry, Victoria Beckham and J.W. Anderson meant there was ample space for a new cohort of designers to flex their creative muscles. The 25-year-old Harris Reed staged a regal presentation of his new gender-fluid designs in a baroque-styled Westminster church, while Yuhan Wang -- who graduated in 2016 -- caught our attention with her tasseled leather suits, faux-fur coats and the inclusion of her cat, Misty. 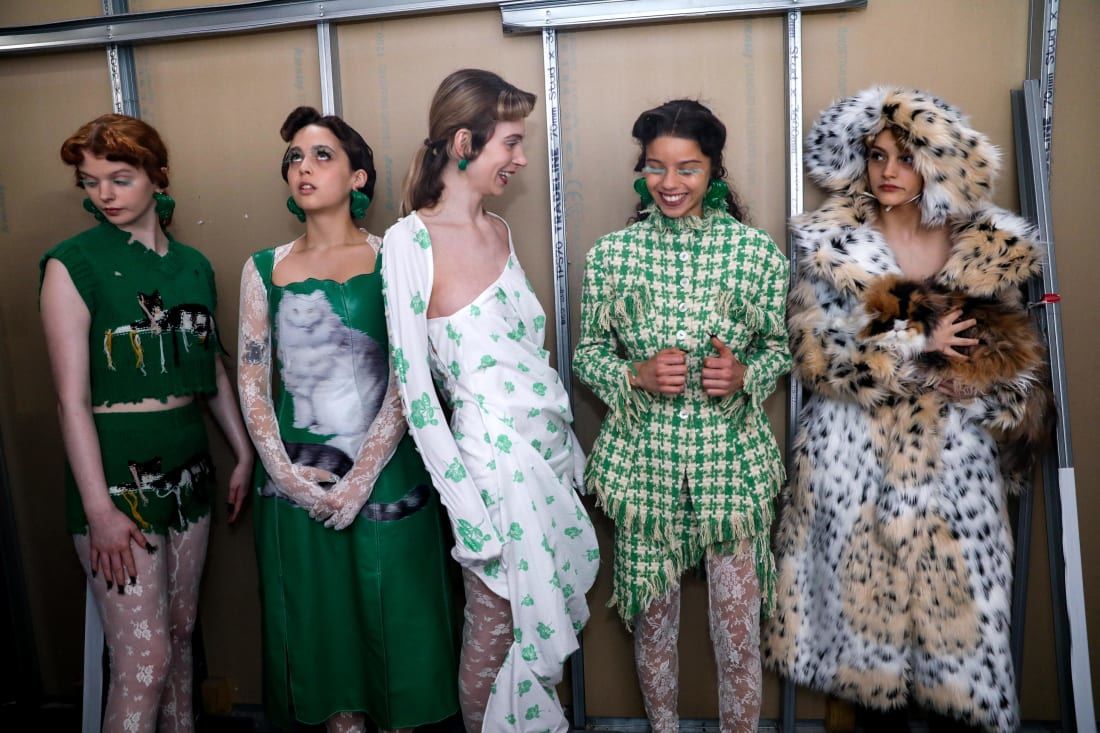 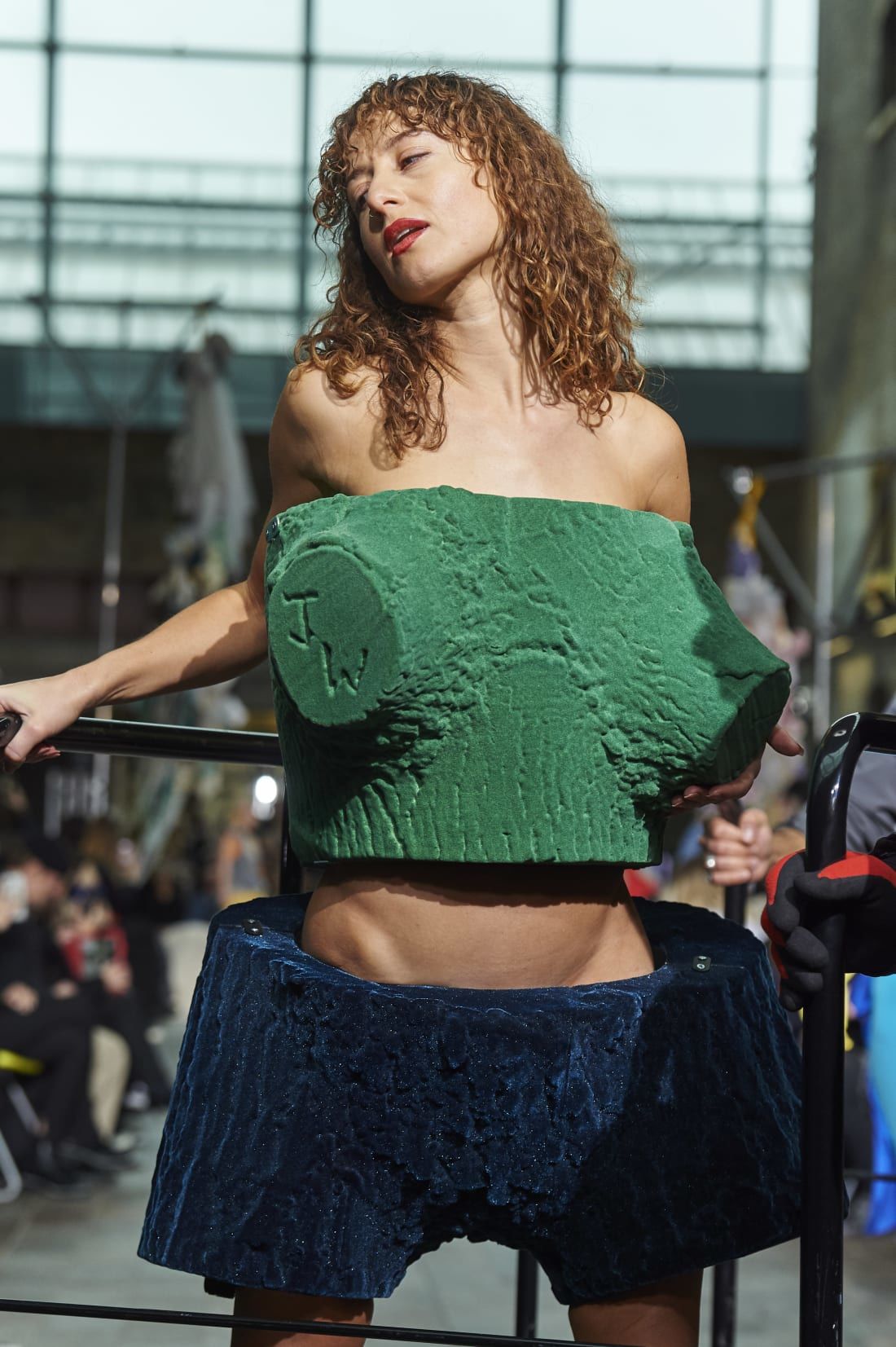 Life of the party

Whether it be a moving orchestral rendition of Olivia Rodrigo's "traitor" at the Richard Quinn show, a German shoegaze band at Bora Aksu or Sam Smith performing at Reed's presentation, live music was back in a big way this season as designers celebrated the return of physical shows after many had gone virtual amid the pandemic. It was the Roaring '20s for RIXO, who presented their new gilded-age collection against the grandiose backdrop of Goldsmith's Hall, while Conner Ives partied like it was 1999 with face-gems, plaster-white under-eye concealer and silk halter neck tops. 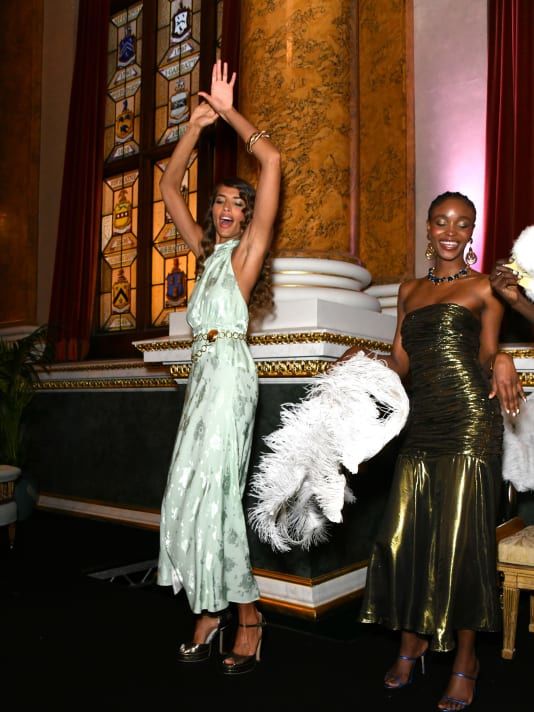 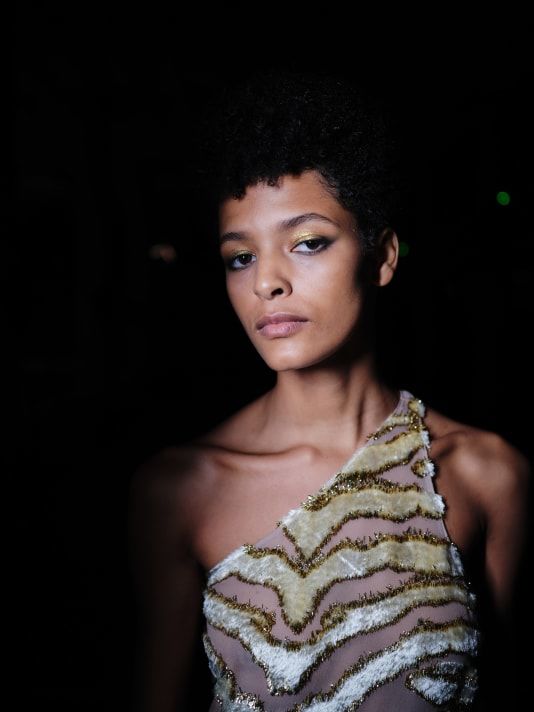 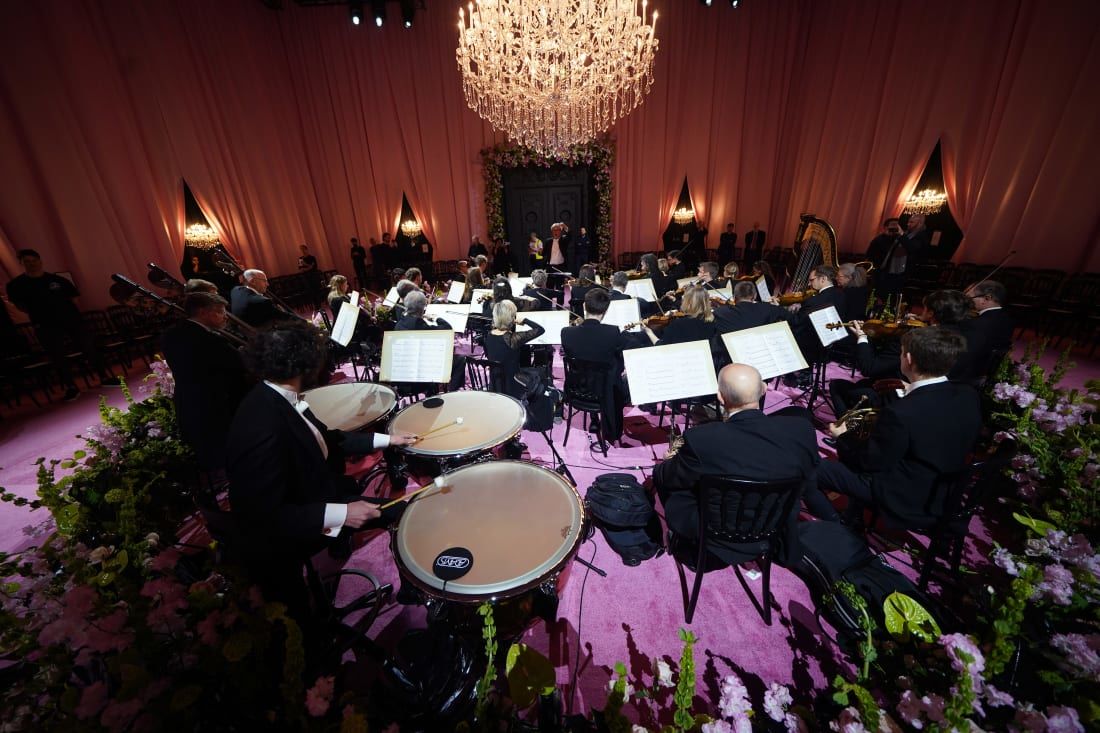 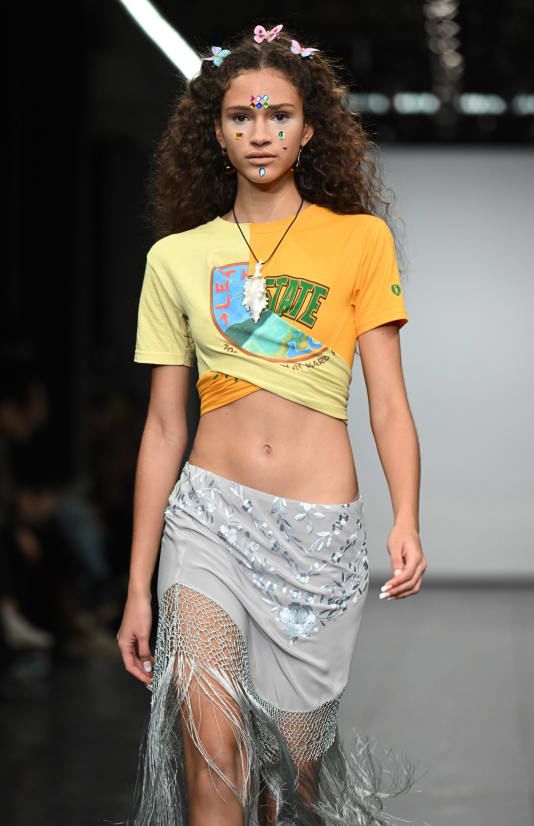 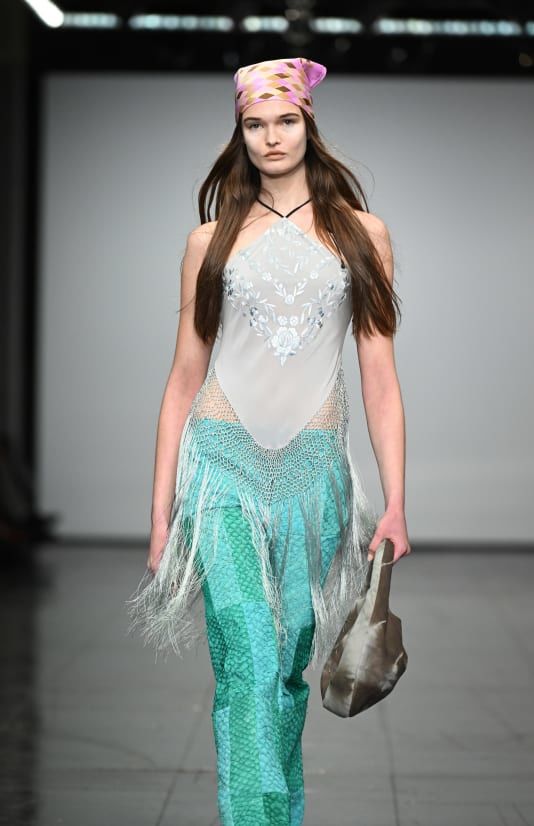 This was the American designer's first London Fashion Week runway. 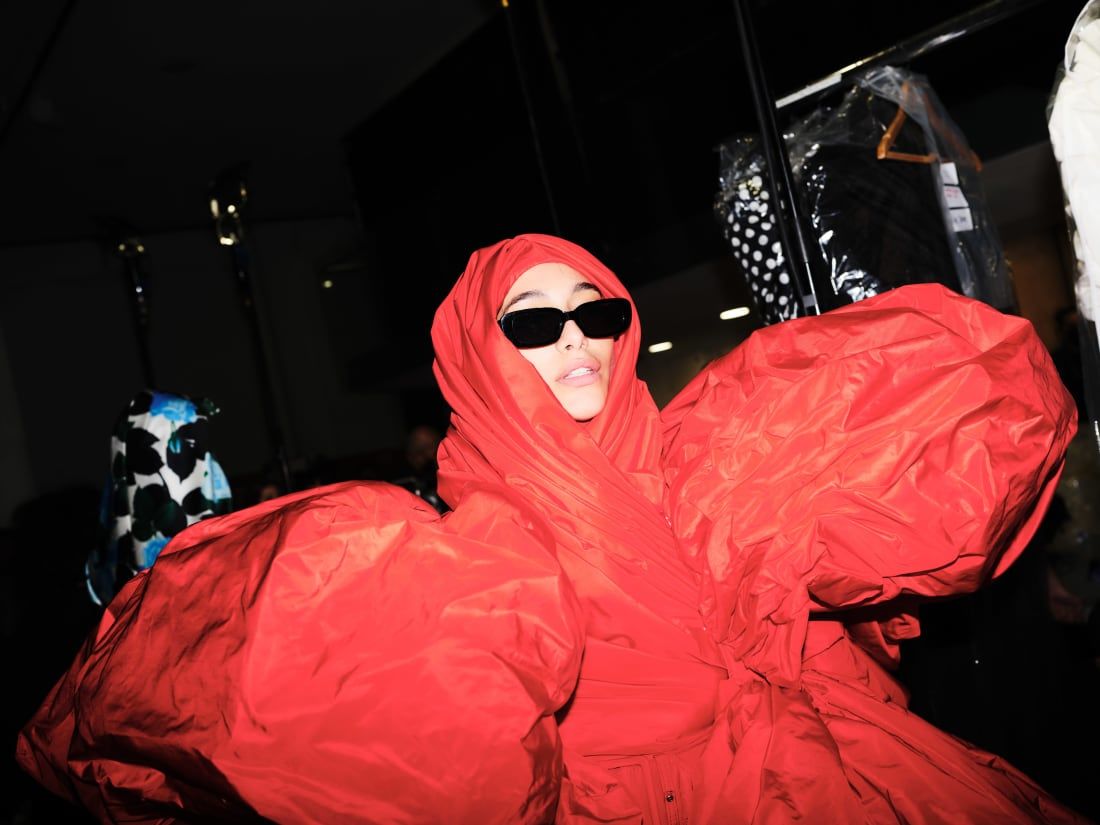 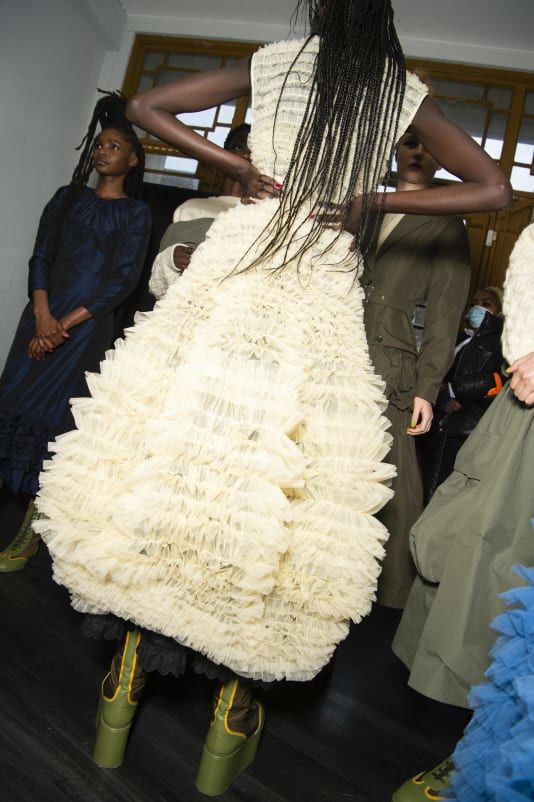 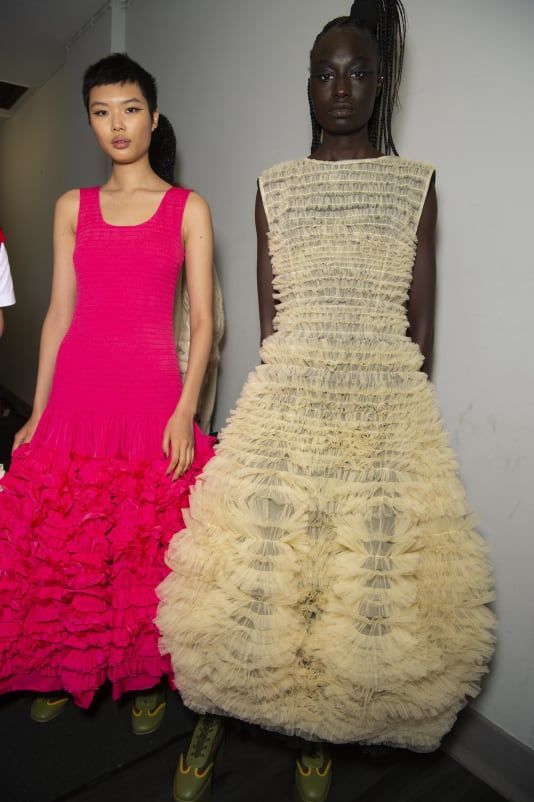 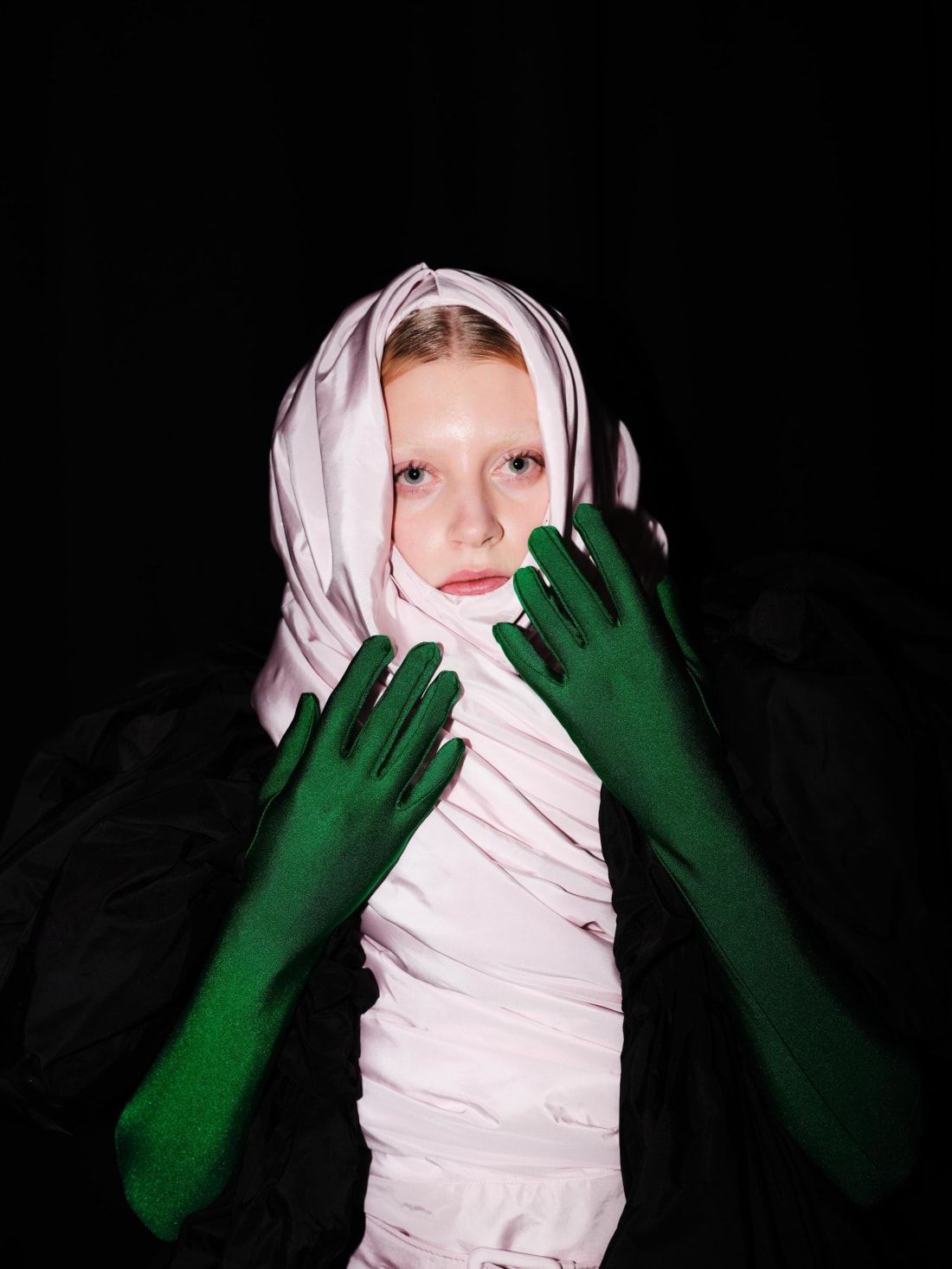 While Quinn turned elegant evening wear on it's head. 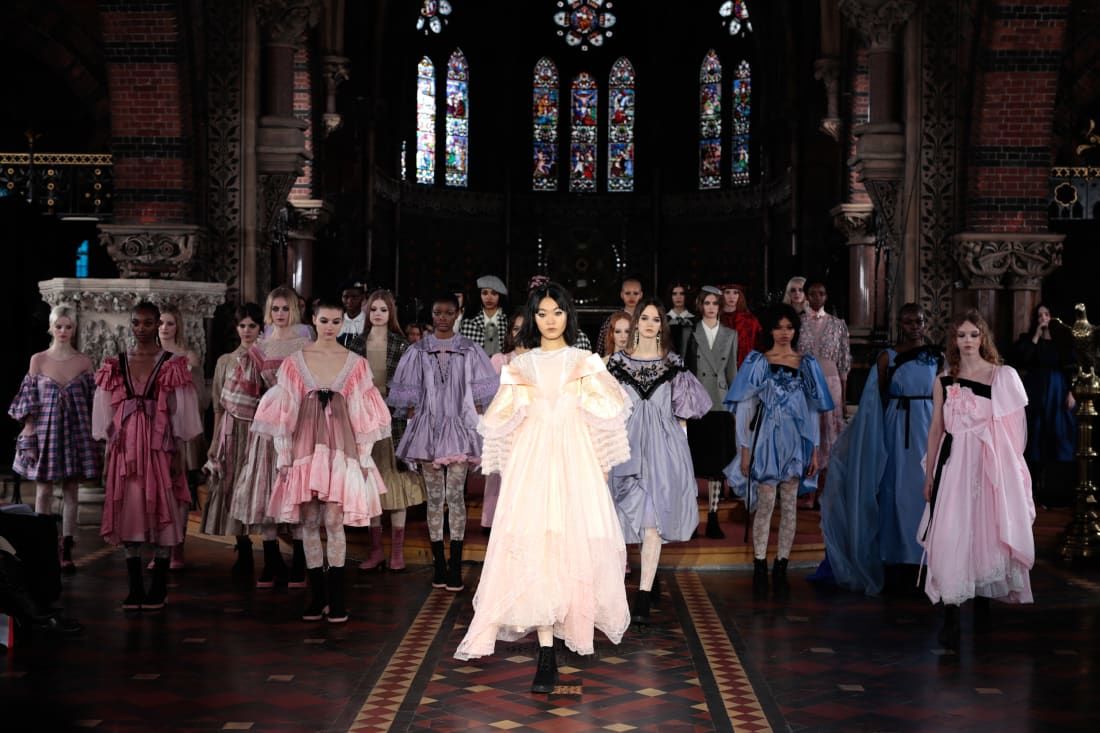 Bora Aksu staged his runway inside a mesmerizing church in South London.

There were some notable collaborations this season, with London-based label Roksanda creating an array of glamping-wear with the help of sports brand Fila -- including wellies and windbreakers that looked more like ball gowns, as well as a puffer jacket large enough to sleep in. Matty Bovan's club kid take on Americana similarly included repurposed pieces by Vivienne Westwood, Calvin Klein and Converse All-Star. 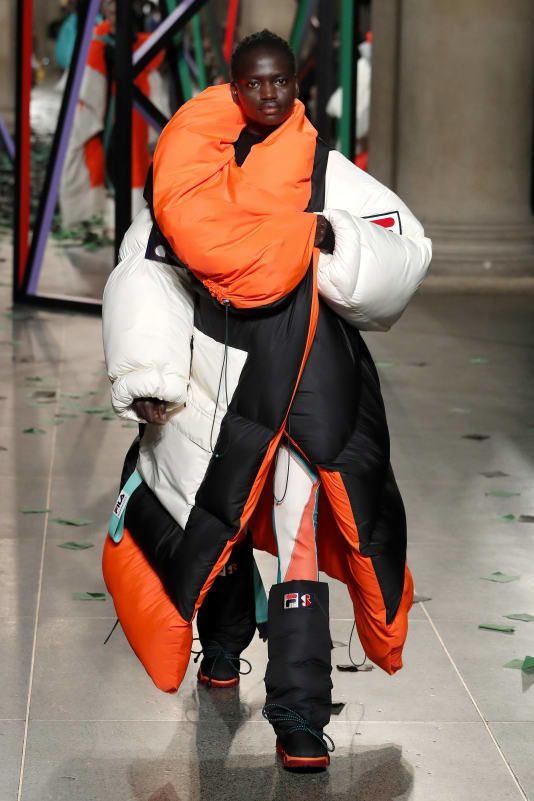 Roksanda collaborated with Fila on a range of glamping looks. 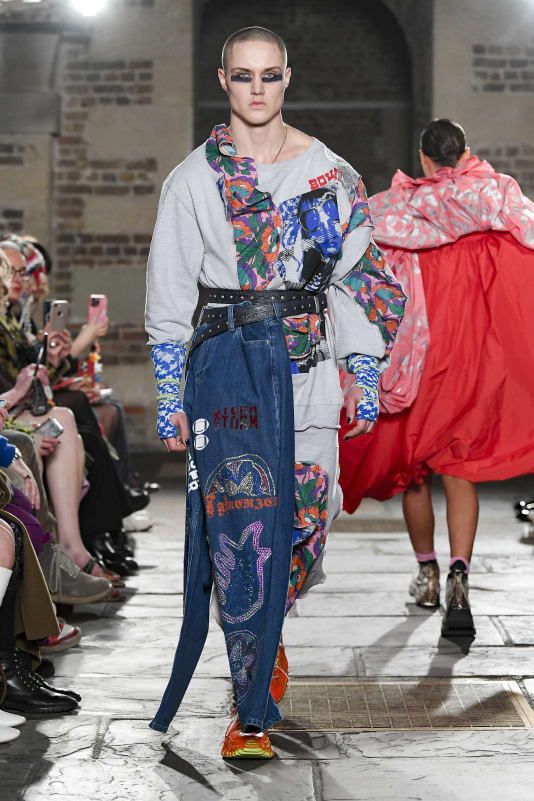 Matty Bovan upcycled pieces from a range of designers in his Autumn-Winter 2022 collection. 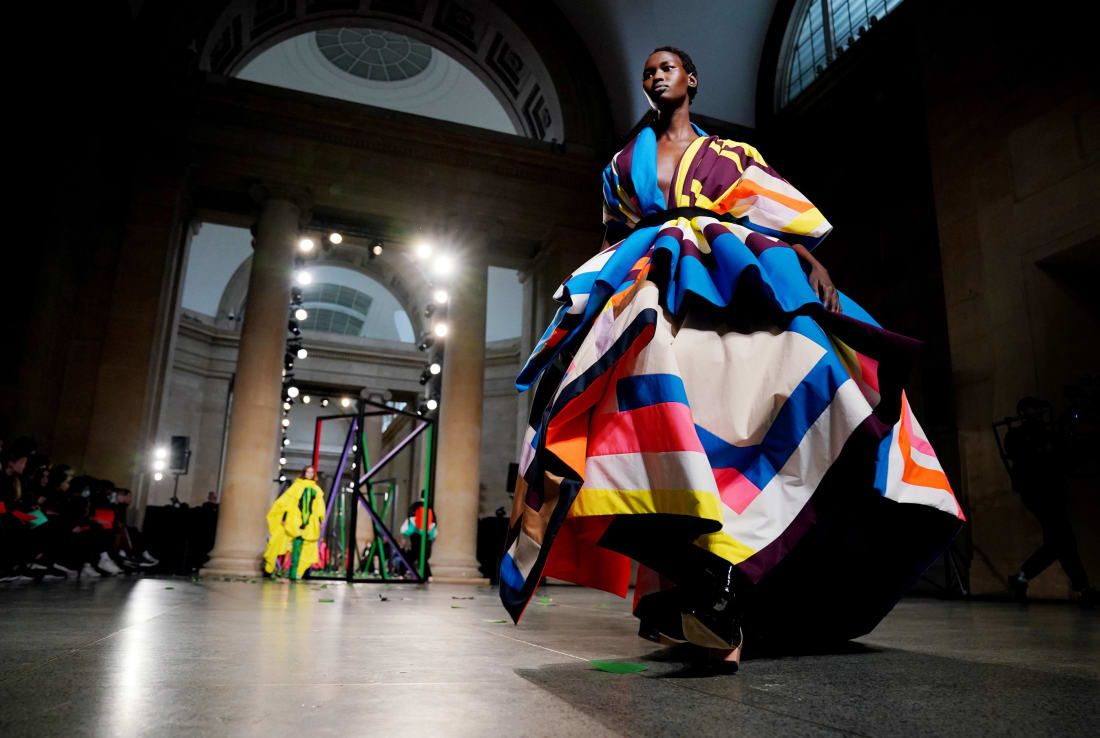 Roksanda held its catwalk inside the Tate Britain. 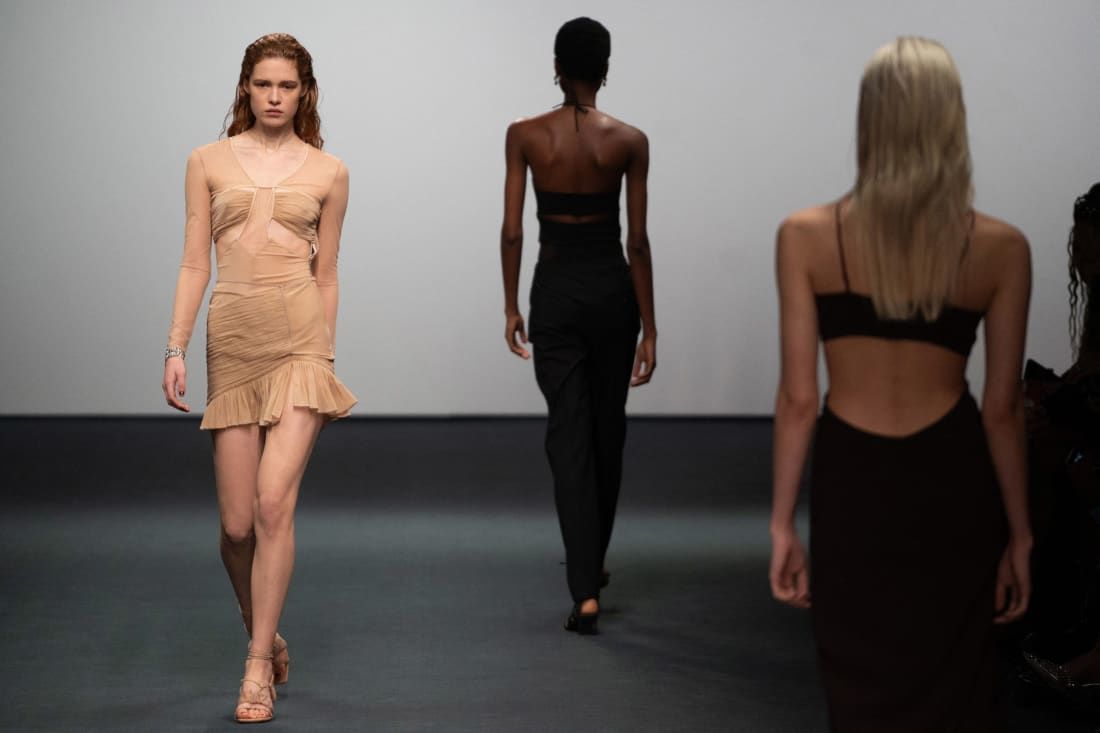 Skin was front and center at the Nensi Dojaka show. 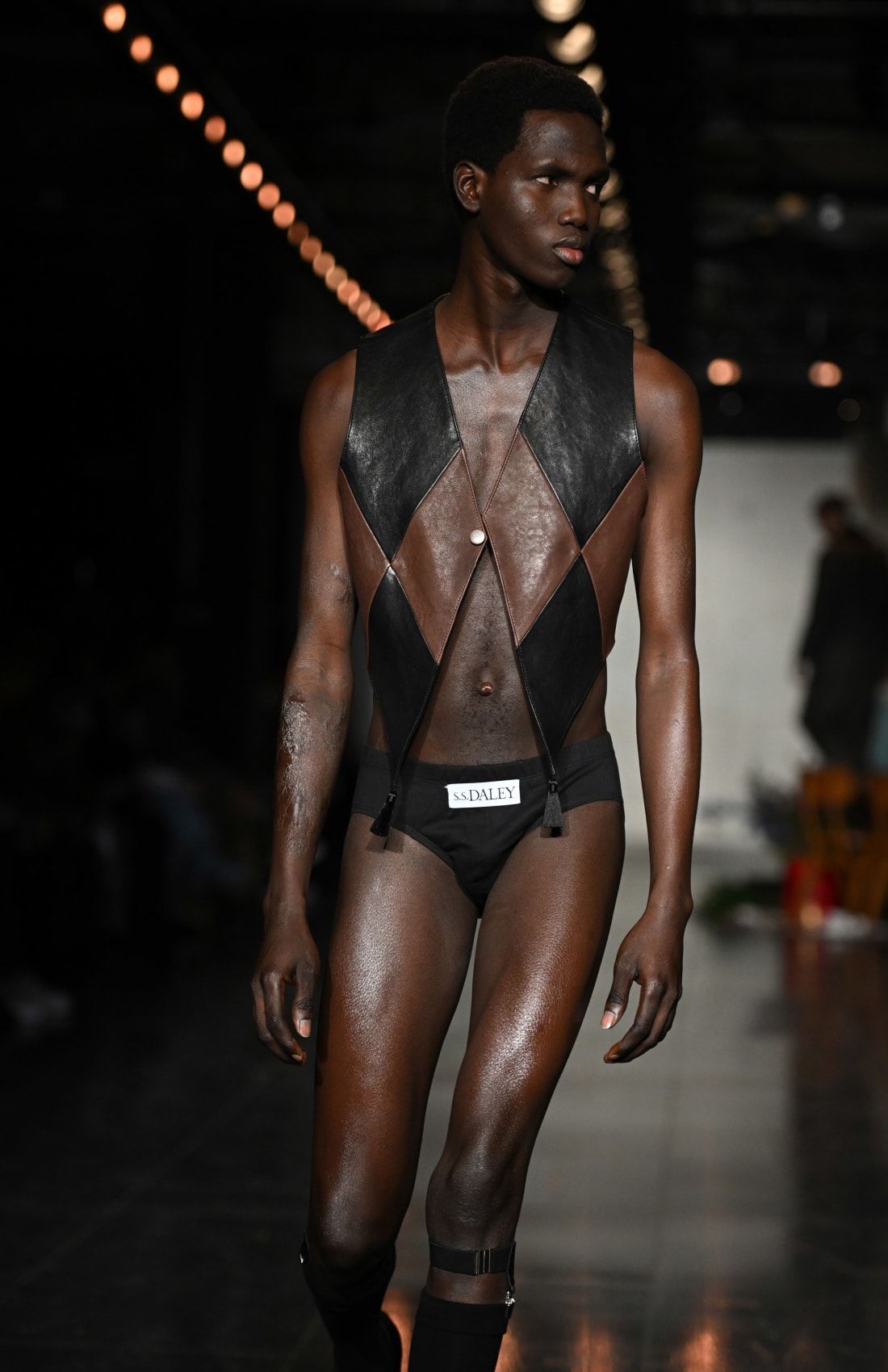 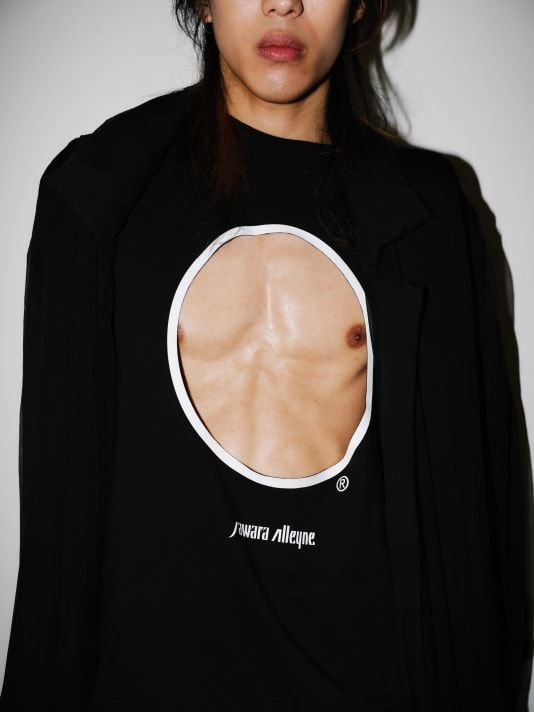 The Fashion East runway gave a new meaning to the term "open shirt." 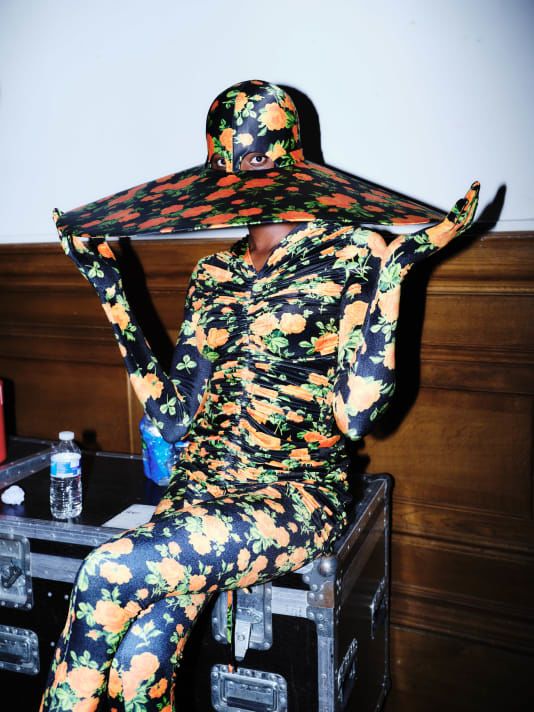 Rising star Nensi Dojaka successfully forged a seductive winter wardrobe by swapping mesh for velvet in her lingerie-inspired Autumn-Winter 2022 show; while British menswear designer Steven Stokey-Daley (of S.S. Daley) veered away from his typical output of bold shirts and Argyle knits to experiment with stripping back -- literally. One of his more memorable looks included nothing but a leather waistcoat, black underwear and a pair of sock suspenders. 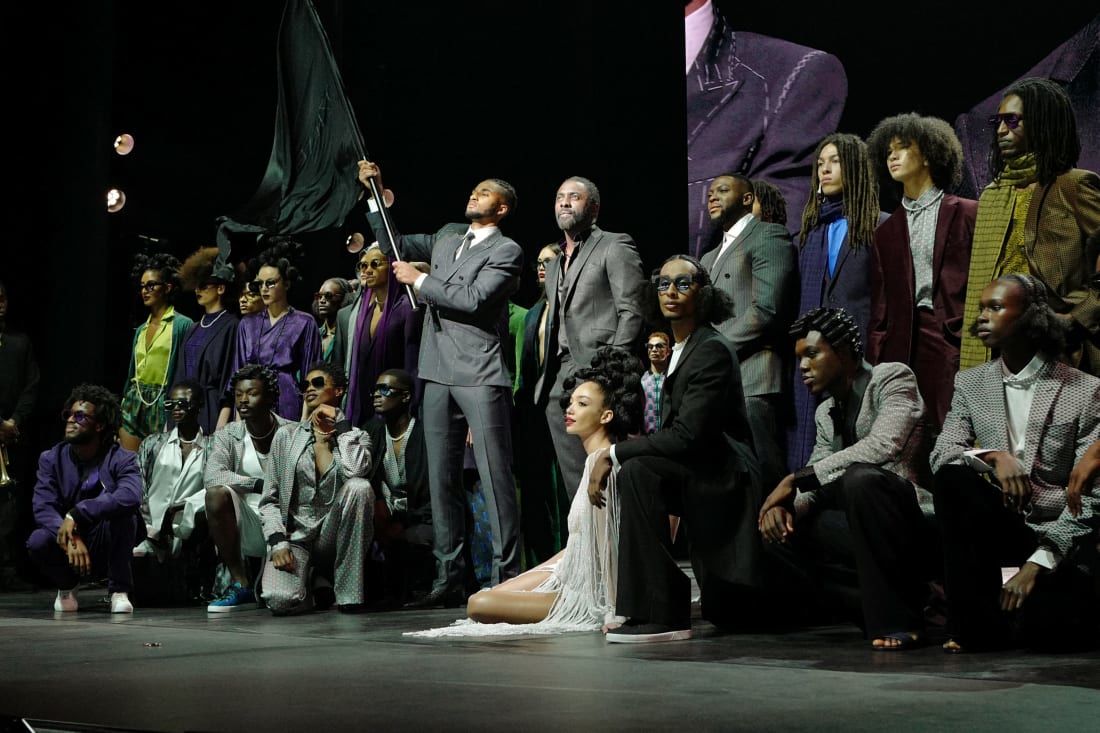 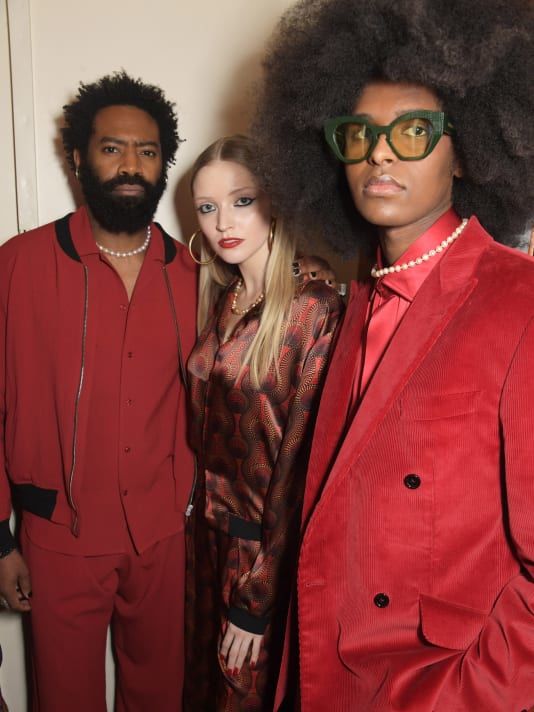 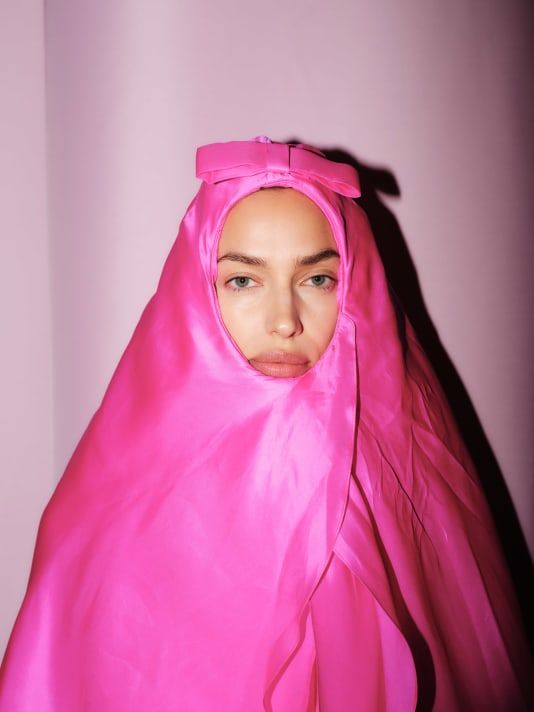 Irina Shayk strutted the runway in a fuscia pink shawl-dress. 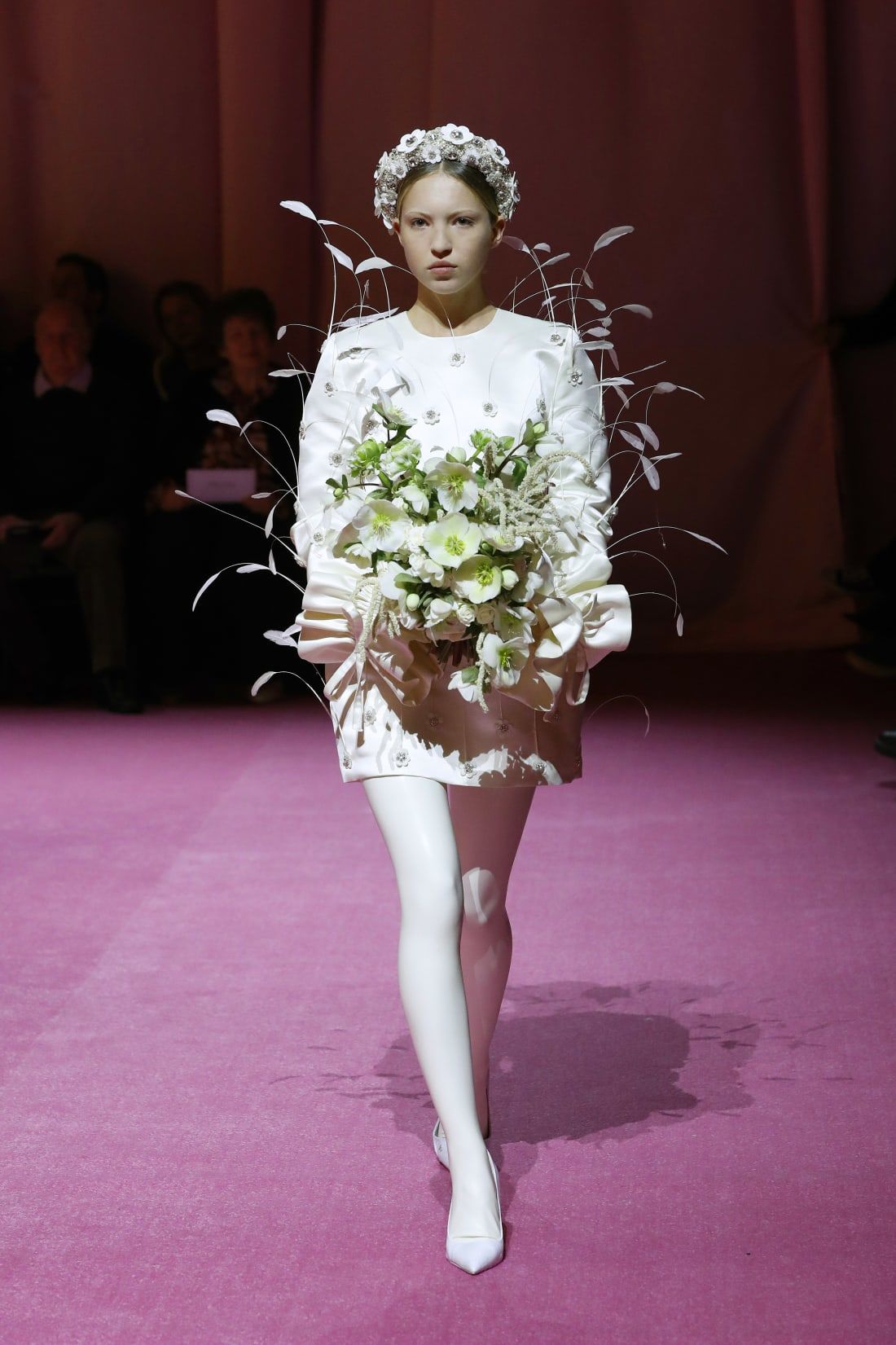 Lila Moss made an appearance at the Richard Quinn show, too.