Letters of support have been pouring in for an Indian nun after a bishop she had accused of repeatedly raping her was cleared by a trial court last week.

For the past two days, my social media timeline has been full of handwritten messages of support for the 50-year-old nun who had accused Bishop Franco Mulakkal of raping her 13 times between 2014 and 2016.

Most of the posts are from women, including activists, feminists, journalists and celebrities in the southern state of Kerala and many contain hashtags such as #withthenuns and #avalkoppam - a Malayalam-language word which means "with her".

The letters pledge support to "the nun in her fight for justice" - sometimes they just carry words of encouragement or snatches of poetry, or contain drawings and artwork.

"In these dark times, you are that ray of hope to millions," one wrote quoting Emily Dickinson. Another quoted from Still I Rise, Maya Angelou's poem that's become an anthem for feminists across the world.

Many wrote in saying they "believed" her words even though the trial court judge did not.

The accusations of rape against Bishop Franco have made headlines in India. The case shocked one of the country's oldest Christian communities and sparked widespread protests after the nun alleged that the Catholic Church had ignored her complaints.

A powerful priest, Bishop Franco was arrested only in 2018 after a group of nuns sat on a hunger strike outside the Kerala high court. The Vatican temporarily relieved him of his duties. A month later, he was freed on bail.

Over the years, the woman had been shamed on social media and one local politician was chastised by the National Commission for Women after he described her as a "prostitute".

Bishop Franco denied the charges against him and last Friday a trial court in Kottayam city found him not guilty.

Additional Sessions Judge (ASJ) G Gopakumar said there were "exaggerations and embellishments in the statement of the victim" and the prosecution had failed to prove the charges against the bishop. He also spoke of rivalry in the church.

"When it is not feasible to separate truth from falsehood, when grain and chaff are inextricably mixed up, the only available course is to discard the evidence in toto. This court is unable to place reliance on the testimony of the nun... so I acquit the accused," he added. 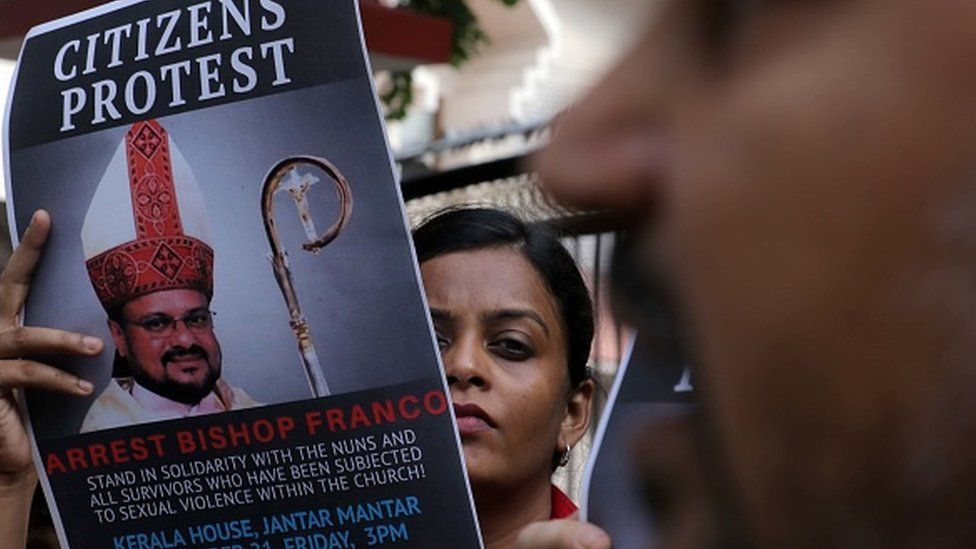 The verdict shocked many, but once the 289-page order became publicly available, it led to massive outrage in India with many pointing out that the judge seemed to be questioning the woman's conduct and moral character.

"The order was not just to exonerate the bishop, it was also to demoralise the survivor and the other nuns who had supported her. It contains graphic descriptions of sexual acts and assault as narrated by the nun. The judge even details a breast examination she underwent. What was the need for any of that?" she added.

A former Kerala high court judge called the verdict "a clear case of miscarriage of justice" and many activists and lawyers criticised it for focusing on the woman's conduct.

Many asked if there was an appropriate way for rape victims to behave and the case drew comparisons with the acquittal last year of former magazine editor Tarun Tejpal that led to accusations of victim shaming.

In the case of the Kerala nun too, ASJ Gopakumar asked why she had not stayed back at her sister's home after attending a religious event there but returned to the convent with the accused. 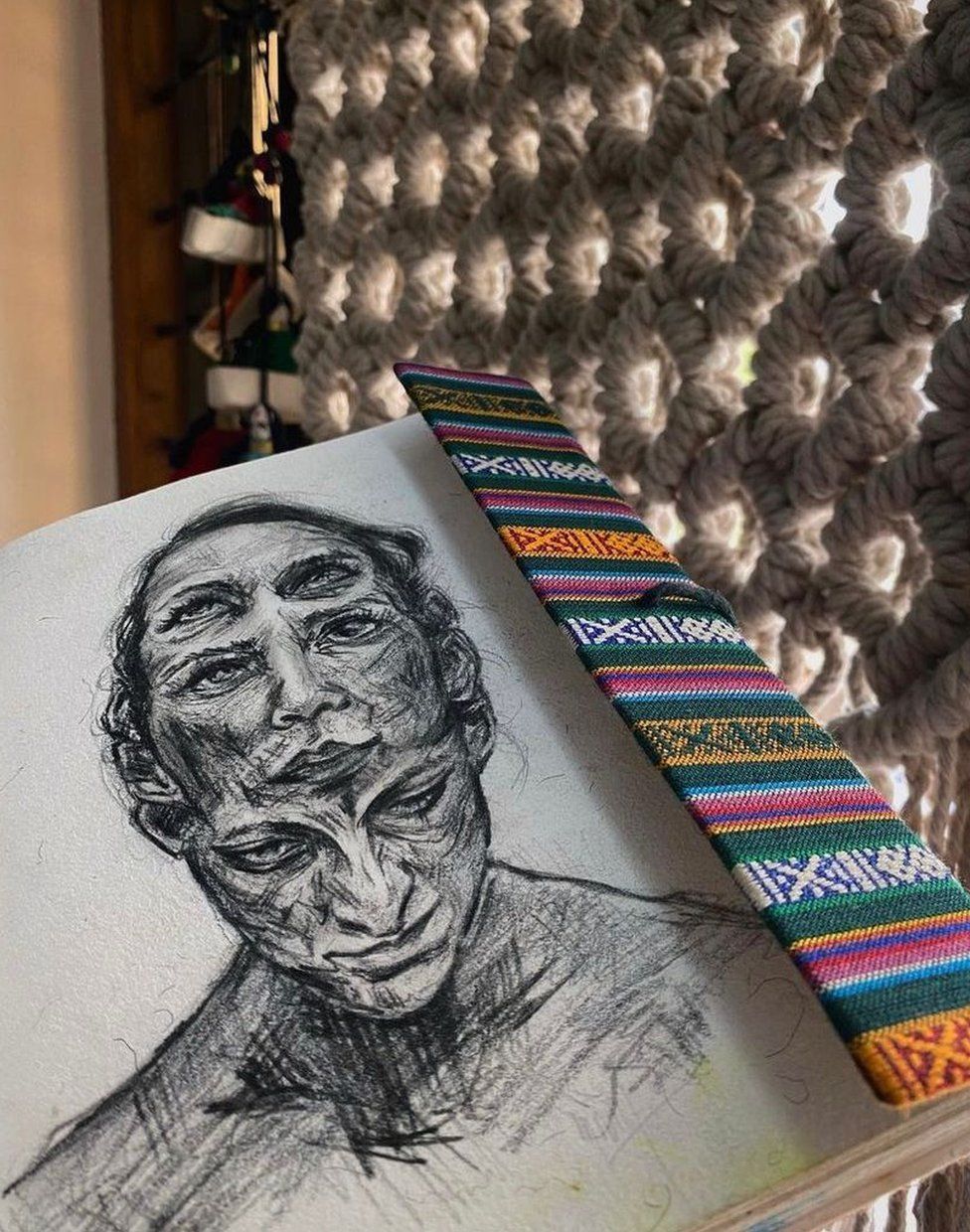 Artist Navami drew this letter of support for Sister X

The Indian Supreme Court has repeatedly ruled that in rape cases, the judges must not comment on the behaviour or character of the woman and the only question they should ask is - did the accused commit rape?

"But you get the sense the nun was on trial here," says Ms Devika.

"The judge completely ignored the social setting in which the alleged crime happened. In the church, even the senior-most nun has to defer to the junior-most priest. And Bishop Franco is a very powerful man. But the judge overlooked that power dynamic."

Now as the state readies to appeal against the order in the high court, there has been an outpouring of support for the nun.

"Some of us came together and said let's do something to support her and five other sisters who have been helping her, to keep their morale up," said Athira Sujatha, a public policy professional and activist and one of the organisers of the letter-writing campaign.

On Wednesday morning at 11am - the exact time on Friday when ASJ Gopakumar had pronounced his order in court - Athira posted a letter on Instagram announcing the campaign.

"Your steadfast support to upholding justice by talking truth to power has been an extraordinary feat of hope and courage - not just to the survivor in this particular case but to survivors, bystanders and witnesses everywhere," she wrote.

Within two hours, she told the BBC, they had received about 200 letters. In 24 hours, their numbers had exceeded 1,000. Many others shared their letters on Facebook, Twitter and Instagram.

Many addressed their letters to "Sister X" (the nun) while many expressed gratitude to the "Sisters" - five nuns who have been a pillar of support for her.

Many of them wrote about their personal experiences, saying that the nun's fight had given them the courage to speak out too.

"Girls like me across this seemingly unjust land are praying for you... You are loved, respected and honoured. There 'will' be light at the end of this really dark tunnel," wrote popular singer Chinmayi Sripada.


Filmmaker Geetu Mohandas wrote: "It will by no means be an easy task, but you can, and indeed you will, survive this journey."

One woman drew pencil sketches of the nuns with a message in Malayalam applauding them: "Your courage and persistence is unparalleled. No movement to get justice is a lost cause."

Athira says when they put out the message asking people to mail their letters, they were apprehensive about what sort of letters they would get.

"But we have not received one single negative message. People understand that the sisters need our support and they are all offering encouragement and solidarity."

In her letter written in Malayalam, Ms Devika compared the sisters to fireflies.

"There may be sceptics who say that the fireflies cannot beat the night... Please tell them... If millions of fireflies get together, they may beat this unending night," she wrote.