It's a normal school day for students at the Korosi Baptist High School in Budapest, Hungary -- studying, presenting classwork, laughing with friends.

Among them is 17-year-old Alla Renska, a tall girl with long blonde hair, carrying her hot pink backpack from class to class.

But Renska is no ordinary student, and she is no longer living an ordinary life -- or the life she envisioned just weeks ago.

Back then, Renska was studying for college exams in her home city of Kyiv, Ukraine, with plans to become an English and Turkish translator.

Russia's invasion of Ukraine changed all that.

"We heard explosions and our house was shaking," Renska tells CNN.

That's when her parents made the agonizing decision to send her to safety, out of the country.

She still can't believe how quickly her life has changed since the Russian invasion. "It's (the) 21st century, it's Ukraine, it's Europe, why?"

Renska's parents arranged for her to stay with good friends in Hungary as they remained behind in Ukraine to care for her elderly grandmother, who is too frail to travel. 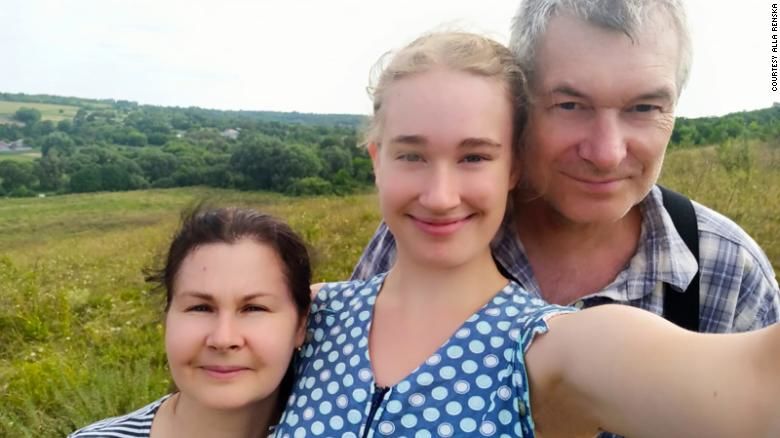 Alla Renska, pictured here with her parents in Ukraine.

"I will never forget that day," she says, recalling the crowds of people who were sheltering in the subway for protection from falling artillery. "Oh my God, so many people were there!"

When Renska arrived at the train station, the crush of the crowd prevented her from saying goodbye to her father. She was shoved onto the train and that was it.

Not long after the train left, an air raid siren sounded. Her father had to sleep in the station, not knowing if her train was safe. He wouldn't hear from her until she got to Hungary.

Renska took few photos during the journey -- only ones showing a bleak landscape that she says matched how she felt.

It was during the train journey that she decided to write an email to Korosi Baptist High School, one of Hungary's top schools.

She wrote about the war and explained what had happened to her. She also told them of her accomplishments.

"I won competitions in the history of Ukraine, the Ukrainian language and foreign literature," Renska wrote. "And I have already written three scientific papers at the Kyiv branch of the Small Academy of Sciences in 2020, 2021."

She ended her email with a plea, "I really want to go to school and continue studying!!! I kindly ask you to help me."

She dated the letter, "The 10th day of the war in Ukraine."

And help they did. 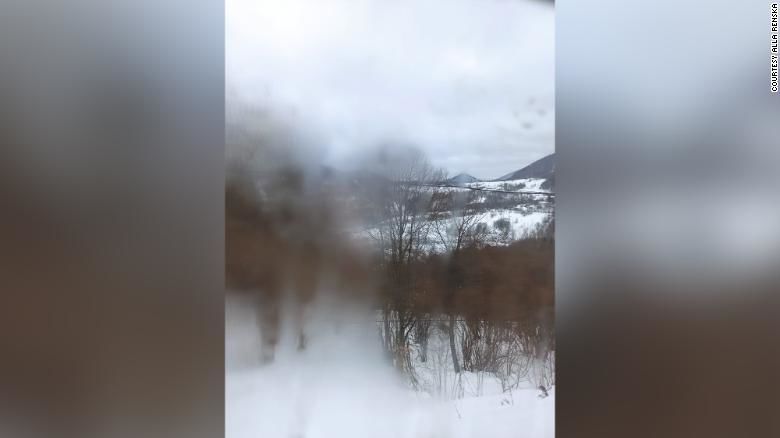 Renska took a few photos during her train trip to Hungary. She says the bleak landscape matched how she felt fleeing her homeland.

School officials launched an appeal among parents of the school community, raising about $90,000 to convert some spare shipping containers into dorm rooms with bedrooms, bathrooms, showers and a small kitchen outside the main school building.

These containers are now where Renska sleeps and studies.

She spends her days in classes and learning a new language -- Hungarian.

Nights are spent in the dorm room with a few other teenage girls who also recently fled Ukraine and were welcomed in by the school.

Renska says she likes living so close to the school and having the chance to meet other students from Ukraine.

"In Ukraine I had an incredible class and wonderful teachers. And here are also extraordinary people," she says, adding that they are "wonderful people who have become my family."

The principal of Korosi Baptist High School says it now has enough space to house 12 more students from Ukraine in the coming weeks. 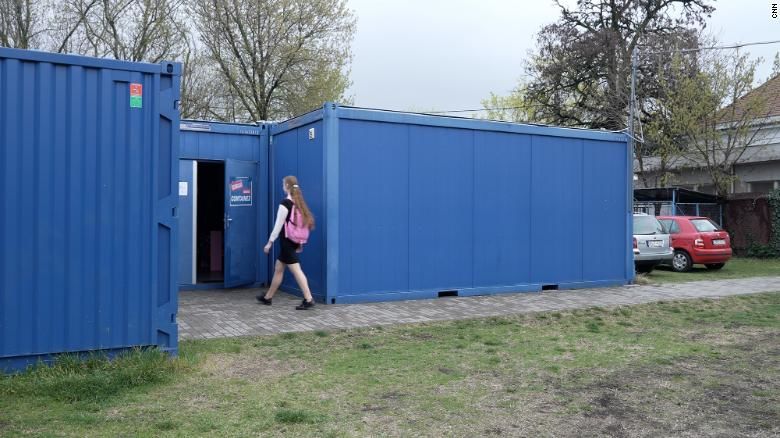 Containers at the Korosi Baptist High Shool have been converted into dorm rooms for Ukrainian refugees.

The school has also provided the girls with a psychologist, a Russian woman, who helps them cope with the trauma they've experienced.

Despite that trauma, Renska says she tries to remain stoic.

"I try not to cry and I try to be strong because my parents, I know that when I cry it makes them feel not very good."

That strength is on display when Renska video calls her parents. It's all smiles as she updates them on school and work.

Her mother, Indira Renska, says that she cannot explain how she feels with her daughter so far away.

"It's too painful (to talk about)," Indira says. "I love her very much. That she is safe now is the main (thing) for me." 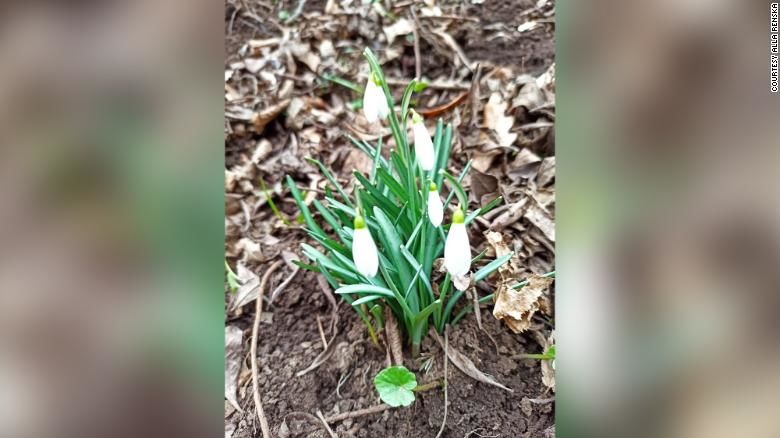 A photo Renska's parents sent her right after she left Ukraine, showing the first spring flower to push through the snow near her house.

After the call ends and her mother hangs up, Renska's brave facade falters and she begins to cry.

"It's so unfair that I should be here and my parents there," she says.

Nonetheless, she is determined to stay optimistic.

"I just would like a normal life," Renska says, believing that one day she will be able to return to Ukraine, where she can go back to making goofy videos with her friends, taking selfies and to playing the bandura, a classic Ukrainian instrument that has become a symbol of her country's fight for its existence.

For now, she holds on to a photo her parents sent to her right after she left. It shows the first spring flower to push through the snow near her home. A sign, they say, of brighter times to come.