Fiona Barclay carried out 'retail therapy at the expense of her employer,' a court heard.

A former Manchester City executive has been sent to prison after stealing more than £100,000 from the club to buy gifts and pay for her wedding.

Fiona Barclay, 33, worked as a business development manager within the football club’s hospitality department, earning up to £30,000 a year.

But she was fired after being caught siphoning off cash from the club accounts, stealing over £104,000 in total.

Now Barclay, who is pregnant, is beginning an 18 month jail sentence and was told by a judge she had been ‘relegated’.

She wept during the hearing at Manchester Crown Court, which heard that she was rumbled after accountants flagged a suspicious transaction.

Prosecuting, Ellen Shaw said a refund of £25,000 aroused suspicion ‘by the fact it was a large round number’. Barclay was questioned and she admitted she’d made an ‘error’, and apologised.

She admitted depositing £15,000 of the sum into her own bank account, and paid it back to the club. But the club investigated further and discovered that Barclay had been taking money from the club since June 2019. 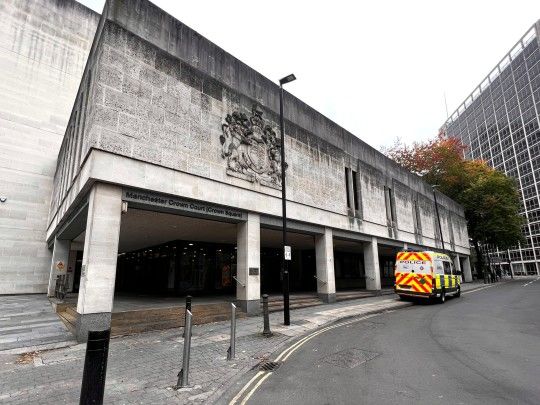 Fiona Barclay appeared at Manchester Crown Court
Barclay faced internal disciplinary proceedings at the club and was sacked in March last year, with City remaining £89,000 out of pocket.

After a criminal investigation was launched, Barclay told police she’d used the cash to pay for ‘various parts of her wedding’, and for buying ‘gifts for her husband and family’.

She pleaded guilty to an offence of fraud by abuse of position.

Defending, Patrick Buckley appealed for Barclay to be spared from being sent to prison. He said that Barclay had moved from her home in Scotland to take the job, and had become isolated.

‘It seems that being hundreds and hundreds of miles away from home, isolated and lonely, solace was sought in retail therapy,’ he said.

‘The problem was that the retail therapy was at the expense of her employer.’

Mr Buckley said Barclay is ‘utterly disgusted with herself’.

He added: ‘There is nothing in terms of reason or logical reason why she did what she did.

“It must have been inevitable that she would eventually be caught.’

He said the impact of the case has been ‘utterly heartbreaking’ for her and that her mental health has suffered.

Since being sacked by City, she has found a new job with a travel firm and told them about her conviction. Barclay has also tried to contact City to arrange repayment of the money she stole but has not heard back from them, the court heard.

Her husband and family have stood by her, Mr Buckley said, adding that her conviction will remain with her forever.

But Recorder Ciaran Rankin sent Barclay to jail, saying: ‘You have thrown so much away because of your dishonesty, and, I’m afraid, pure greed.’

He added: ‘I’m afraid you have relegated yourself because of your greed and deception into the ranks of those who can no longer call themselves a person of good character.’

Barclay, of Falkirk, will serve half of her 18 month sentence in prison. She will now be the subject of an investigation under the Proceeds of Crime Act, to discover whether any of her fraudulent gains can be clawed back.