Throughout her three years as the prime minister’s partner, Carrie Johnson has had to make many fashion choices. Today, as she left No 10 alongside Boris Johnson for the last time, it was no different. However, the end result was certainly unexpected.

For the occasion she wore a fuchsia pink maxidress from the British brand Harmur. Described as a “dreamy maxidress”, it features a ruched waist, billowing sleeves and a cut-out back – a design signature of the brand. “No sexier way to walk away,” reads a tagline for Harmur. Was this Carrie having the last laugh as she plotted what to wear to watch her husband leave his position of political power?

Founded by mother and daughters Minnie, Matilda and Constance Murphy in 2017, the brand’s site states: “Harmur is for women who want to look and feel sexy and feminine without having to reveal all … it’s the backless alternative to conventional low-cut.”

As soon as she was pictured at Johnson’s farewell speech on Tuesday morning, high interest in the dress caused the brand’s website to crash for a number of hours. At one stage there were 500 people hovering over the dress at the same time. A spokesperson for the brand explained to the Guardian that Carrie Johnson bought the £485 dress herself. “We really appreciate that she supports young brands like ourselves. It’s really lovely to think that she fell in love with the dress enough to wear it today. She wore it so well.” 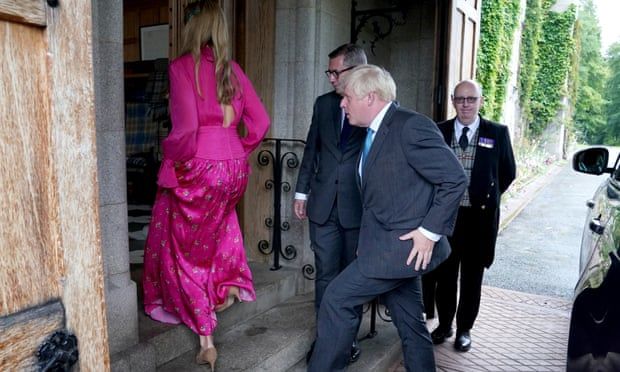 Among her husband’s sombrely dressed fellow Conservatives, mainly a sea of males in navy suits and Nadine Dorries in a beige trenchcoat and trainers, Carrie Johnson was impossible not to notice during her husband’s 7.30am farewell speech. Boris Johnson may have talked about “reentering the atmosphere and splashing down invisibly in some remote and obscure corner of the Pacific”, but for her final official photocall, Carrie was certainly going out with a bang.

As a woman in the public eye, you unofficially sign up to sartorial scrutiny. From viral tweets to office water cooler debates, Carrie Johnson would have known full well as she slipped on that dress this morning the effect it would have. Boris Johnson may have lost his power but this was a hint that she isn’t quite ready to step away from the spotlight.

When she first entered No 10 in a floral gown from Ghost, it marked the first time in history that a girlfriend of a prime minister lived at Downing Street. Three years later, she departed as his wife and mother of two of his children. A keen environmentalist, she is currently the head of communications at The Aspinall Foundation.

Online the general consensus seems to be that it was the epitome of poor taste. Wearing a backless dress to meet the Queen at Balmoral certainly requires a strong backbone. Something that Carrie Johnson, reportedly nicknamed Anne Boleyn for her influence on her husband’s decision making, made it clear she has a lot of today.