The bishops will recommend that "prayers for God's blessing" for gay couples be adopted, the BBC expects.

Church of England bishops have refused to back a change in teaching to allow priests to marry same-sex couples, sources have told BBC News.

The Church of England's bishops met on Tuesday to finalise their recommendations after five years of consultation and debate on the Church's position on sexuality.

Their proposal will be debated at the Church's equivalent of a parliament - the General Synod - next month.

BBC News spoke to several bishops present at the meeting who said the Church's teaching that Holy Matrimony is only between one man and one woman would not change and would not be put to a vote.

It comes after years of debate over the issue.

Same-sex marriage has been legal in England and Wales since 2013. But when the law changed, the Church did not change its teaching.

In 2017, the Church of England began an extended consultation period called 'Living in Love and Faith'.

In November last year, the Bishop of Oxford became the most senior Church of England bishop to publicly back a change in the Church's teaching. Although a handful of others supported him, they remained in the minority.

The refusal to propose a vote on allowing same-sex marriage is likely to anger campaigners for change within the Church.

Some have already told BBC News they will ask the synod to strike out the bishops' proposals next month.

The bishops' decision puts the Church of England at odds with its Anglican equivalent in Scotland, The Scottish Episcopal Church, and the Presbyterian Church of Scotland, which both allow same-sex weddings.

The Anglican Church in Wales has provided an authorised service of blessing for gay couples but does not allow same-sex weddings in church.

English bishops will recommend that some "prayers for God's blessing" for gay couples in civil marriages be adopted, the BBC expects.

A controversial church document from 1991 that says clergy in same-sex relationships must remain celibate will be scrapped. And the Church will also issue an apology for the way it has excluded LGBT+ people, BBC News was told by several bishops.

One liberal bishop present at the meeting said there had been "substantial progress".

A conservative bishop said: "We're being honest about the fact we're not of one mind in these issues. But we're not going to give up walking together." 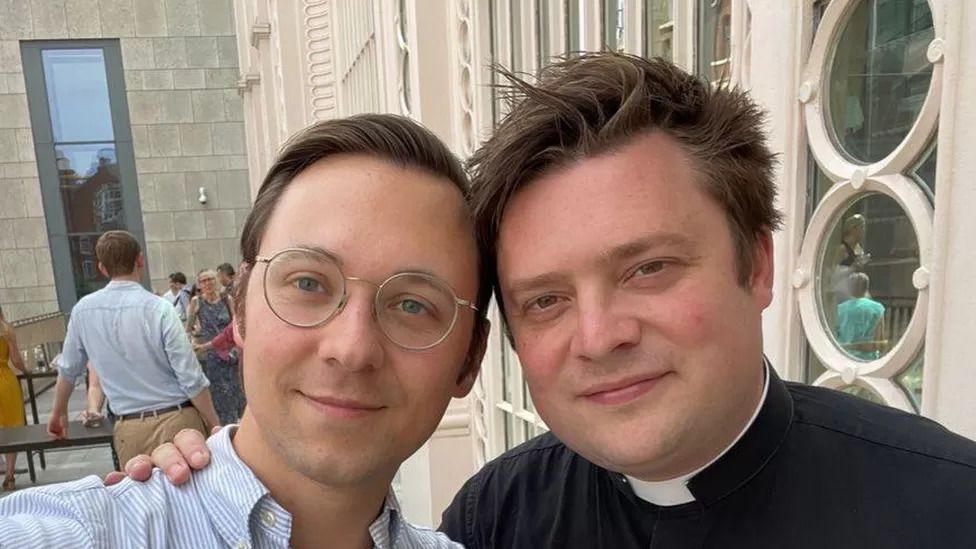 Charlie Bell (right) and his partner Piotr said they would continue to campaign for the Church to change its teaching on marriage.

Charlie Bell, 33, and his partner Piotr Baczyk, 27, live in south east London, where Charlie is a priest. They have been waiting to marry until the church allows gay weddings.

He said they felt a "deep disappointment" that the bishops weren't proposing a vote on same-sex marriages.

"It leaves same-sex couples in a bit of a limbo and also as second-class citizens," he told BBC News.

However, he said they would continue to campaign for the Church to change its teaching on marrying gay couples.

He said: "This isn't over. If the bishops think this will resolve the current situation they are very much mistaken."

A Church of England spokesman declined to comment on the specifics of the bishops' recommendations but said: "Bishops met today and continued a final review of a Living in Love and Faith paper that will be considered by synod.

"The papers will be finalised and made publicly available later this week."