Canada-born Kaillie Humphries​, winner of the first-ever Olympic gold in the monobob, says she "never gave up" on herself.

It's the third Olympic gold medal for the 36-year-old but the first while representing the US -- Humphries switched allegiances after ​filing a harassment complaint ​with Bobsleigh Canada Skeleton (BCS) in ​2018.

"A lot of things were going through my mind. It has been a journey to get here and it hasn't always been guaranteed," said Humphries after her victory.

"It hasn't always been easy. I have had a lot of fears and doubts. I have had highs and lows."

Humphries won her first gold medal in the two-woman bobsled event back in Vancouver 2010, before defending her title in Sochi 2014.

However, following a bronze medal finish in Pyeongchang in 2018, Humphries says she fell into a depression and alleged she was verbally and mentally harassed by ​her coach.

She subsequently filed a complaint with BCS and the governing body said it immediately forwarded the case to an independent investigator.

"Investigating these allegations to their fullest was our number-one priority to ensure a safe training and competitive environment for everyone involved in our sport. The investigation found insufficient evidence of Kaillie's allegations." 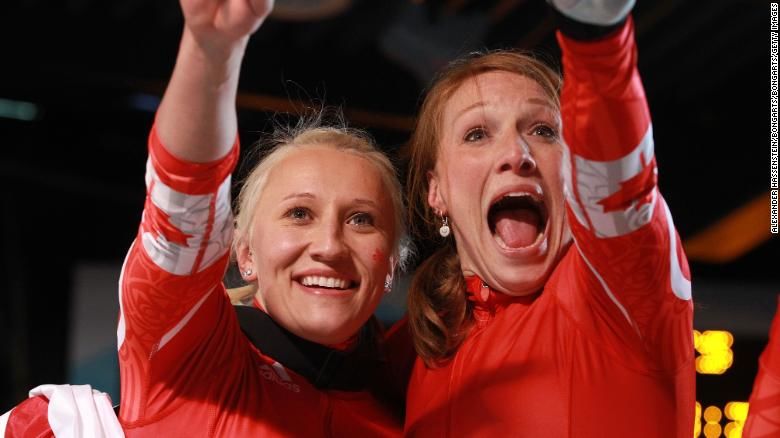 Humphries then filed a lawsuit, requesting Bobsleigh Canada Skeleton release her in order for her to represent the US -- where she lived with her American husband.

A judge denied her application for immediate release but, after consideration, BCS decided to grant Humphries a release from its ​program in 2019, allowing her to compete for the US at Beijing 2022.

Humphries then set about making it to her fourth Winter Olympics and dominated the field in the inaugural running of the Olympic monobob -- the one-person bobsleigh event.

"Just the feeling of pride and accomplishment and the fact that I never gave up on myself, that a country stood behind me," she told reporters after winning gold.

"I was able to be here and put my best foot forward and to know that that worked, and that my best is the best in the world, it's something I've always believed, but it's definitely something I have doubted more times than not.

"To know that I still got it is a pretty cool feeling and it's so heart-warming to be able to bring back a gold medal for a country that has really stood behind me for the last four years."

Humphries was joined on the podium by her silver-medal winning US teammate Elana Meyers Taylor -- who had won a race against time after testing positive for Covid-19 ahead of the Winter Games.

Ahead of competing at the Winter Olympics, Humphries had recently posted on Instagram saying she was thinking of marking any potential medal success at Beijing 2022 with a new tattoo.

"I've always been fascinated with tattoos ... With each one of mine I feel more complete. My tattoos tell my story, and I will continue to get them with each new journey throughout life," Humphries wrote on Instagram.

"If I win a medal this Olympics In 2022, I think my next tattoo will be a dragon. That's the name of the bobsled track in China, 'the sleeping dragon.'

"I will also be getting an American themed tattoo regardless of what happens during racing."