The butterfly has symbolised ephemerality – and rebirth – for millennia.

Great movements for change need powerful symbols. Picasso's dove is forever synonymous with the World Peace Council, and the rainbow flag inseparable from LGBTQ pride. These icons play a key role in unifying the actions of people from disparate backgrounds and nationalities. They bestow a visual identity on to a set of ideals. If the climate crisis is searching for a symbol, one option is the butterfly, an insect that is not only hypersensitive to the ecosystem, but steeped with meaning in the history of art.

Butterflies are one of many exquisite creatures to be threatened by man-made climate change. According to Michigan State University, populations of monarch butterflies (Danaus plexippus) are in decline in North America because of alterations in spring temperatures. Meanwhile, many butterfly species across the world are migrating northwards to find cooler climes. The long-tailed blue (Lampides boeticus), for example, was never a native to the UK, but rising temperatures have driven them upwards from their usual European habitats. The mountain ringlet (Erebia epiphron) currently inhabits the north of England but is due to disappear completely as its environment warms year on year. Butterflies and their adjusted migration patterns have become one of the warning signals of the climate crisis. 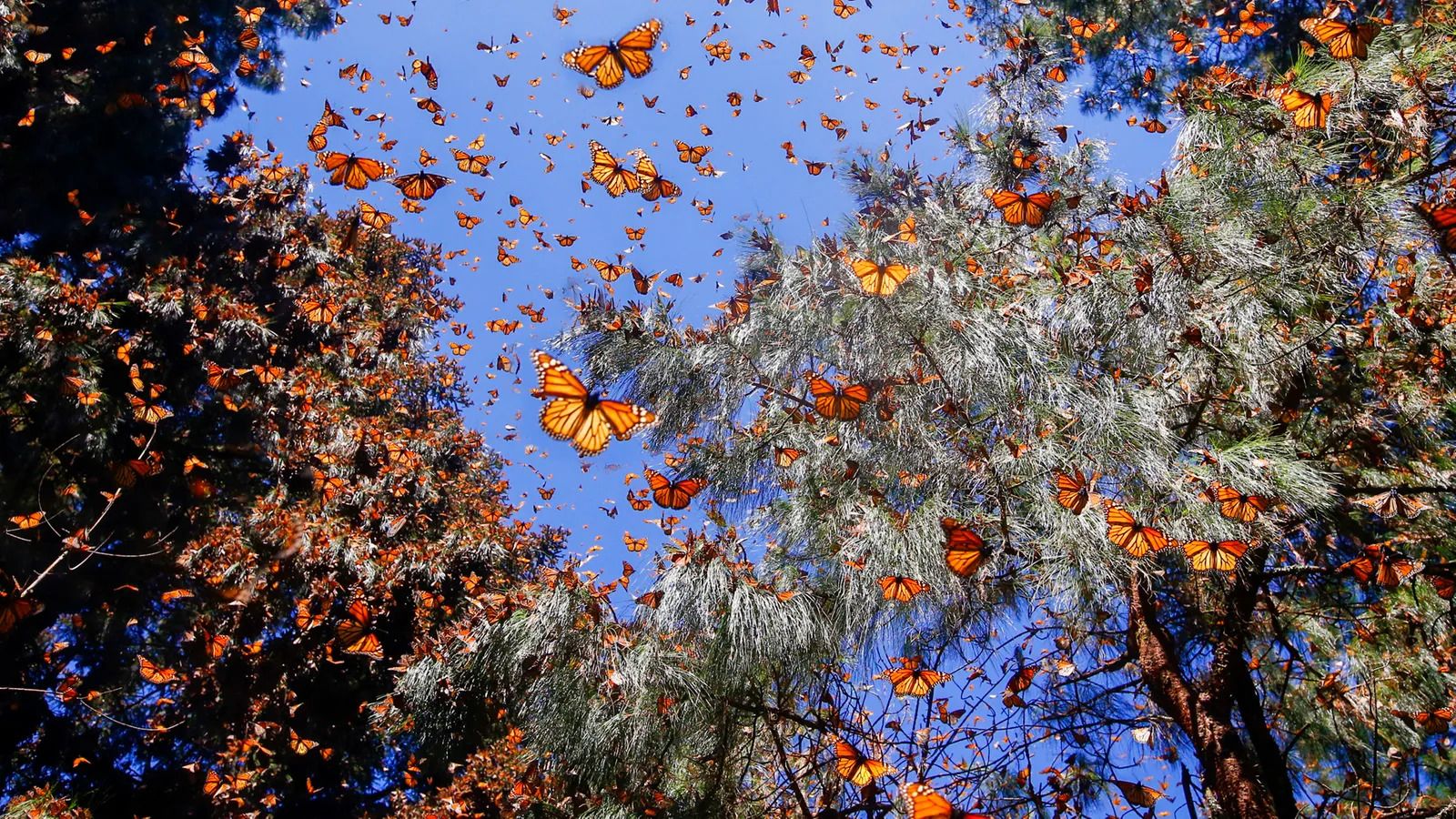 Over the course of millennia, butterflies have held multiple meanings around the globe

Butterflies aren't just living symbols of the precariousness of nature and beauty, however. It is also possible to understand them as icons of hope, and the ability to adapt in a fast-changing world. Indeed, these thoughts predate the Anthropocene by many centuries. Since the 4th Century BC, visual artists have been fascinated by the ephemerality of butterflies – their brief summertime appearances, their dainty structures and skittish, lackadaisical flight paths. Their most entrancing capability is to metamorphose from caterpillars. It is an act that has long seen as a symbol of beauty breaking free from baseness. In the 21st Century, it might just serve as a reminder that we still have the potential to change and survive. 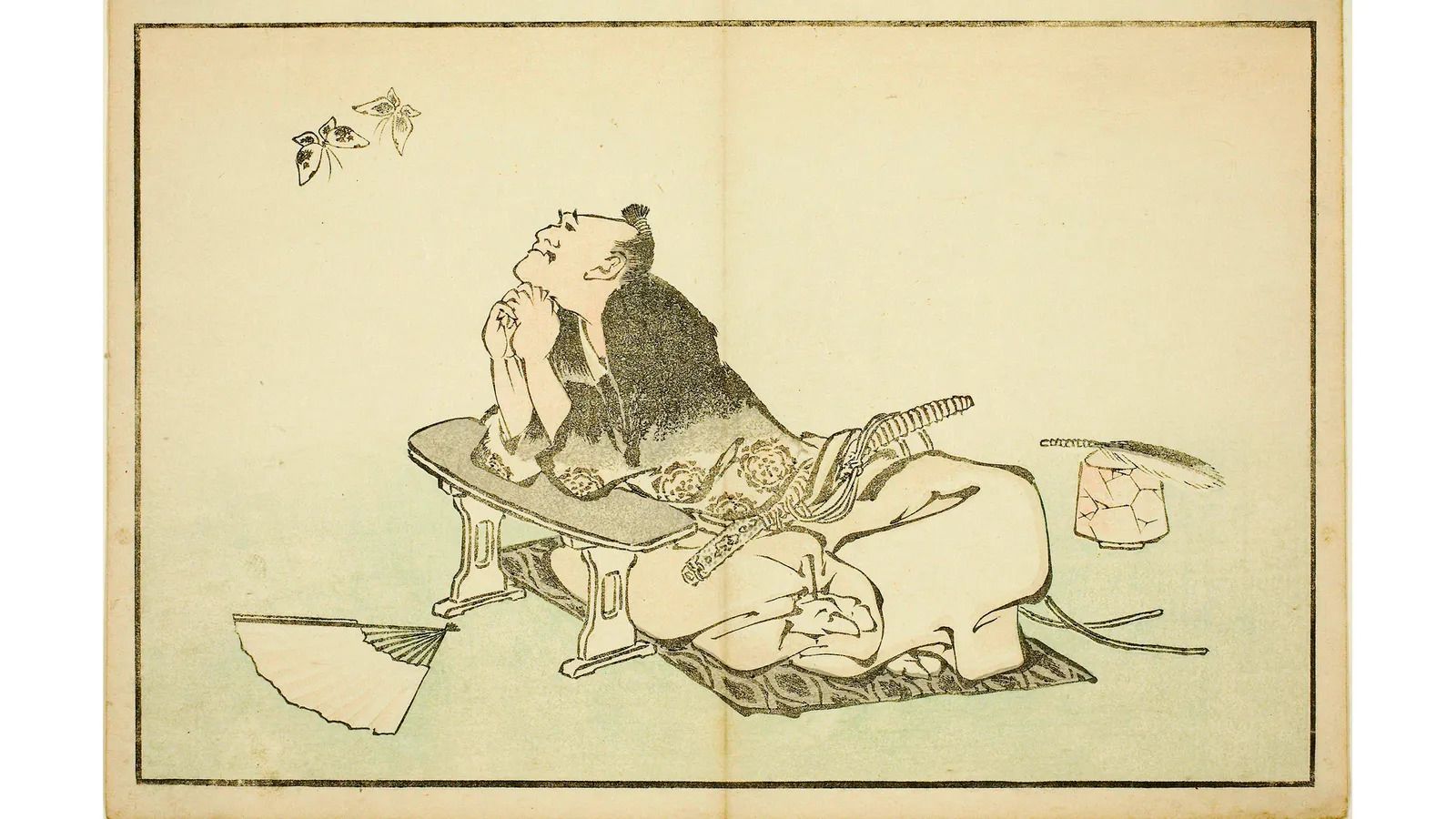 In this woodblock print by the Japanese artist Hokusai, the pair of butterflies in the top left symbolise human consciousness

But butterflies have also been symbols of ourselves: more precisely, our inner, spiritual selves. Written in China in around 300 BC, Zhuang Zhou Dreams of Being a Butterfly is one of the most famous stories connected with the religion and philosophy of Daoism. It became a key inspiration for later Chinese and Japanese artists who represented butterflies:

The point of this story is to emphasise the instability of our mental constructs, especially our ego and our perception of reality. Nature is of great importance to Daoism. It focuses on following the "path" or "way" of nature, respecting and adapting to it in order to lead a life of harmony. Such principles feel remote in the present age. The tale of Zhuang Zhou's butterfly clearly dissolves the artificial barrier between humanity and nature. It reminds us of our subservient place within nature. It flips our established sense of being by placing the greater truth of nature in contrast to our insubstantial, flittering consciousnesses. 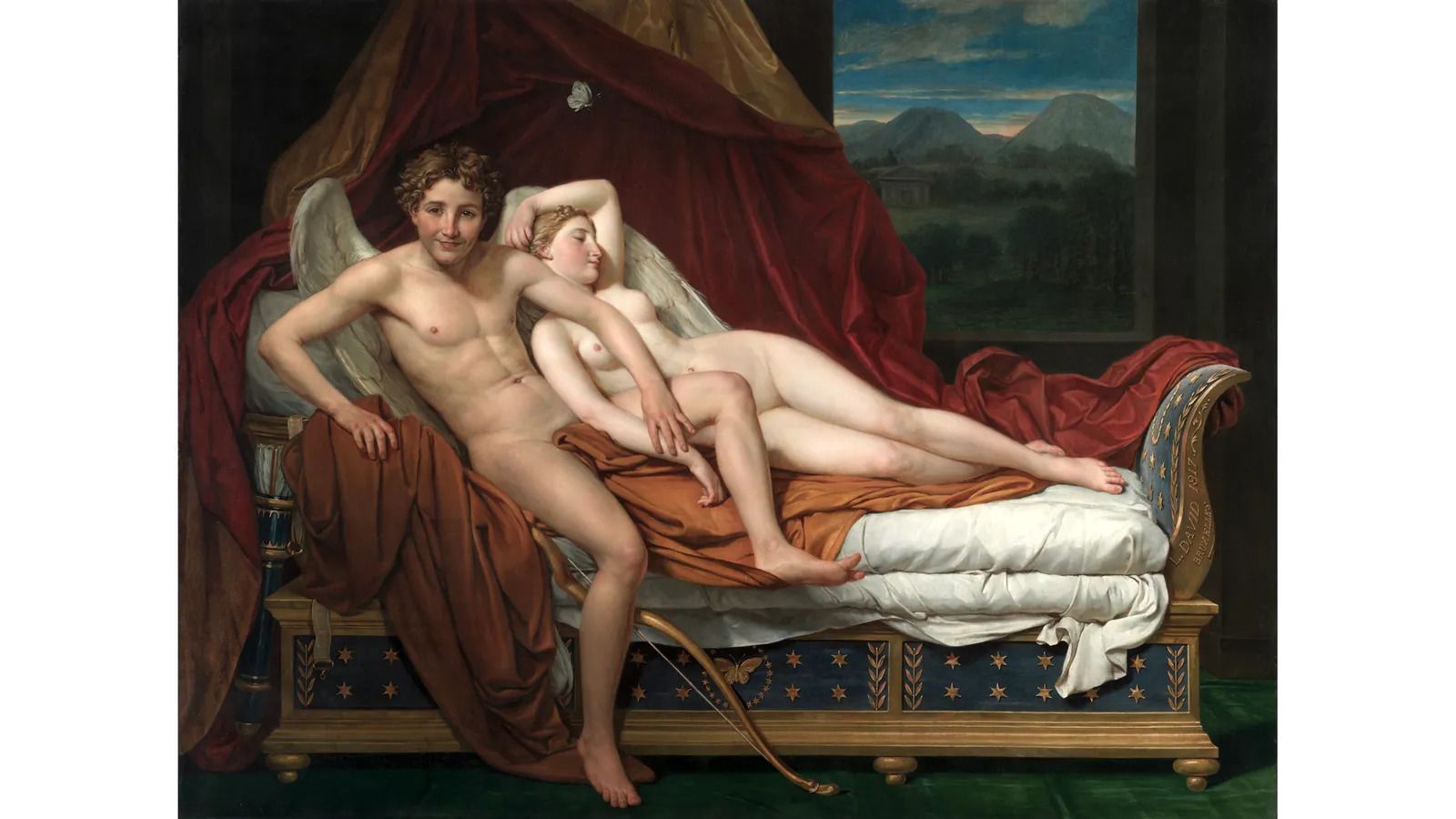 In Jacques-Louis David’s Cupid and Psyche (1817) the butterfly hovers above the head of Psyche, goddess of the soul

At around the same time, but 5,000 miles to the west, a strikingly similar notion had occurred in ancient Greek thinking. Aristotle (the tutor of Alexander the Great) made the first recorded instance of the word "psyche", meaning the human spirit or soul in reference to a butterfly, in his treatise The History of Animals (c 350 BC). It stemmed from the belief that caterpillars' cocoons were like tombs, and the butterfly emerging was like the "anima" (soul) fluttering free from the prison of the corpse after death. In Greek myth, Psyche, the goddess of the soul, is often depicted with a butterfly. Later, in Christian art, butterflies symbolised the resurrection of Jesus, as they seemed to be a rebirth of the caterpillar's hitherto hidden spirit.

This is why the butterfly could be a climate-change icon: it is an international symbol of the purer part of the human character, connected with nature and at the opposite pole to our materialism self-interest. It is also fundamentally hopeful, betokening regeneration.

But in art history, butterflies have also been warning symbols. In European visual culture, they continued to represent the human soul for centuries – and the significance became deeper and more complex in the Renaissance and Baroque periods (1450-1700). 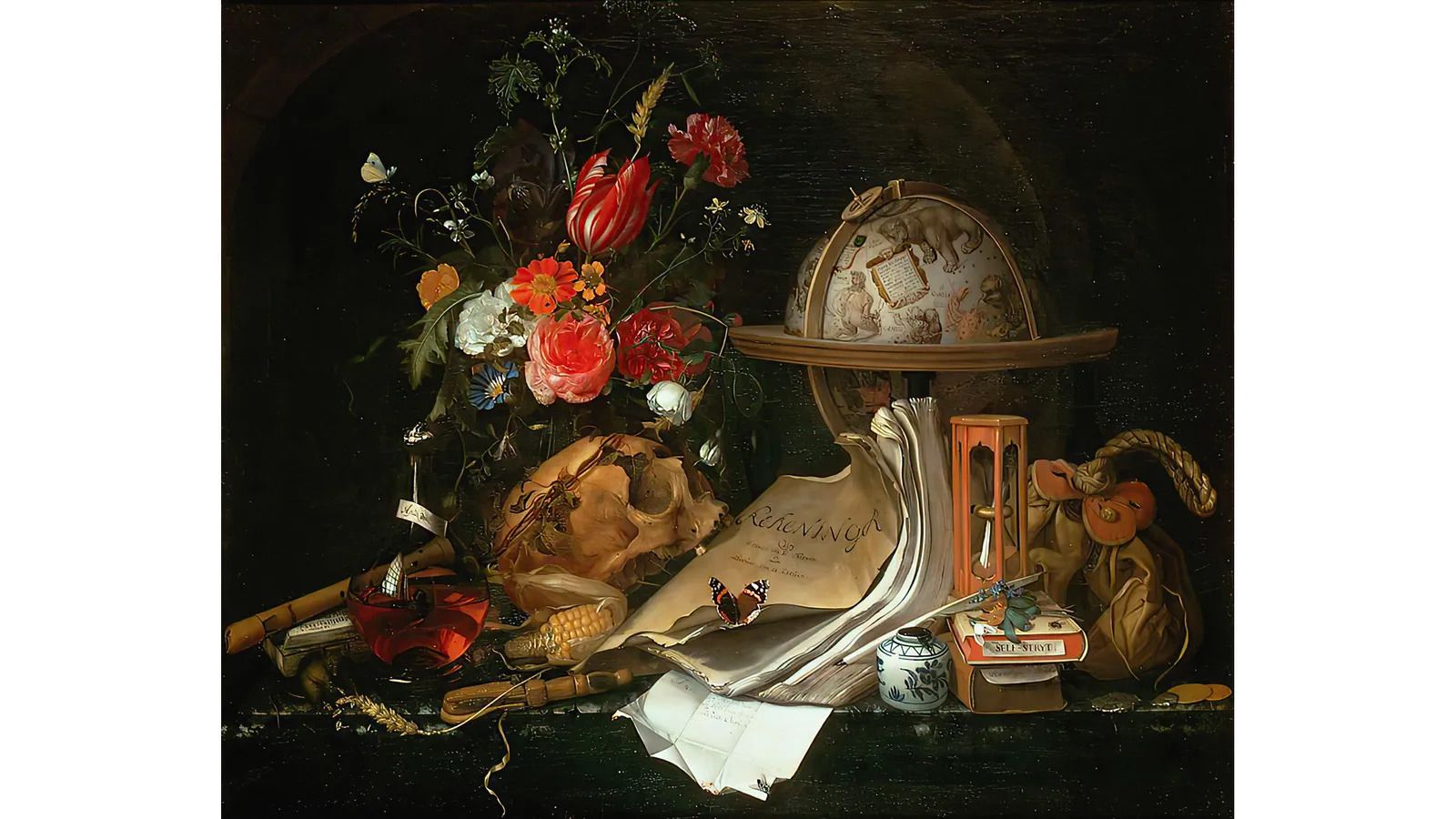 One of the greatest painters of still life in the Dutch Republic was Maria van Oosterwijck. Her technical abilities – particularly in representing different species of butterfly – is exemplified in Vanitas Still Life (1668). The red admiral (Vanessa atalanta) on the book at the centre of the painting is again a symbol of the human soul. But it also communicates an ethical message, one that is highly relevant in the modern age. Beneath it is a piece of paper with a handwritten quote from the Old Testament's Book of Job: "Man born of woman is of few days and full of trouble" – a passage that goes on to say, "He springs up like a flower and withers away; like a fleeting shadow, he does not endure." It sounds bleak, but it is intended to liberate us from our addiction to luxuries. All the objects in the image show the passing of time and the ultimate futility of worldly possessions. Would a similar philosophy guard us against environmentally unfriendly extravagances like long-haul flights and excessive meat consumption in the 21st Century?

The butterfly remains a vanitas symbol, reminding us of the transience of life and the ephemerality of the luxuries we mistakenly think important

You may have spotted another butterfly in the upper left corner of Vanitas Still Life. A convention in still-life paintings of this period was to show a light-coloured butterfly – in this case a small white (Pieris rapae) – in an elevated position and a red-coloured one below, possibly to differentiate between holy purity and hell's inferno in the afterlife. As well as condemning sensory indulgences, the painting's message is about the precarious beauty of the natural world embodied in the flowers and butterflies. It nudges us to live in balance with nature, exercising responsibility and avoiding excess. 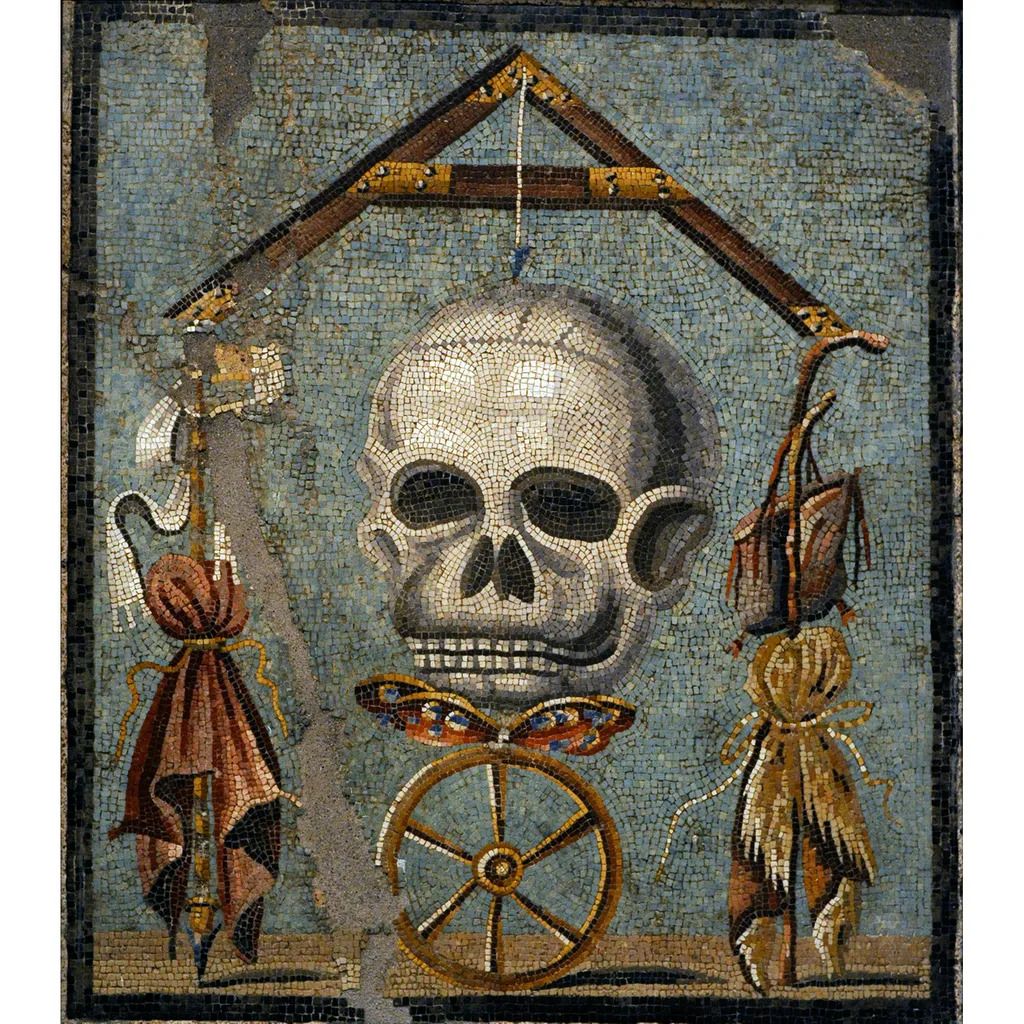 A small white is the focus of one of art history's most marvellous paintings of childhood: Thomas Gainsborough's The Painter's Daughters chasing a Butterfly (1756). Nature isn't a bountiful playground for these two girls, though: the butterfly just within grasp is settled perilously on a thistle that will spike the tender young hand that reaches towards it.

It may be possible to explain the changing symbolism of butterflies by considering historical context. Maria van Oosterwijck was painting at the inception of capitalism and her work reflects guilt about accruing spectacular wealth. Gainsborough's painting, made on the cusp of the industrial revolution in Great Britain, reflects an ongoing delight in the soon-to-be-threatened natural world. But the butterfly remains a vanitas symbol. That is, they remind us of the transience of life and the ephemerality of the luxuries we mistakenly think important. 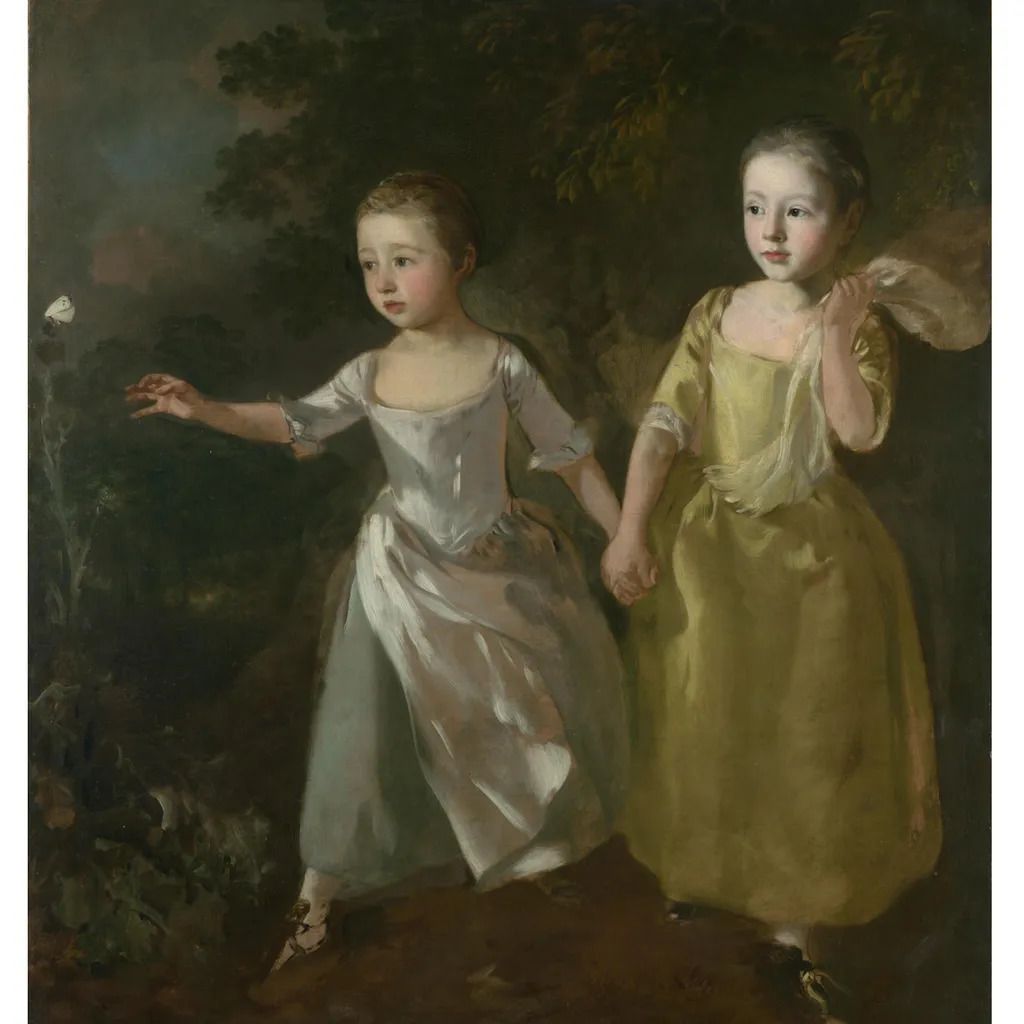 In the 20th and 21st Centuries, the vanitas connection with butterflies held strong. Inevitably, however, the message has mutated in line with historical conditions. In the 1950s the French artist Jean Dubuffet made art using real butterfly wings which he stuck to the surface of canvases to make colourful designs of abstract patterns. In marked contrast to the careful dissection and mounting of serious butterfly collectors, Dubuffet deliberately ripped their wings off and dispersed them asymmetrically in his compositions. They were despised by critics, who described them in language reminiscent of the recently ended World War Two. They were "massacres" that unmasked the artist's "useless" and "cruel" attitude to nature. Today, however, they are seen as a key element in the artist's oeuvre, inspiring future artists to treat butterflies symbolically as harbingers of disaster.

Maybe the most famous contemporary practitioner to use butterflies in their art is Damien Hirst. Also aware of the traditional symbolism of butterflies, Hirst has been using them since the beginning of his career in the early 90s but his culminating works deployed butterflies on an epic scale. I am Become Death, Shatterer of Worlds (2006) is a kaleidoscopic composition which used 2,700 real sets of butterfly wings. They strobe across a 5m-long canvas creating a cinematic and sublime spectacle. Death is disconcertingly electrified into a thing of great beauty.

Butterflies could be an icon of climate change for both scientific and cultural reasons. They are among the planet's most rare and ethereally beautiful creatures, and they are uniquely attuned to global warming. There is also a shared human cultural understanding of butterflies: common themes link Daoist writing in China in the Warring-States period to a still-life painter in 17th-Century Netherlands, and connect philosophers in ancient Greece to 21st-Century YBA artists.

These themes – of change, resurrection, the soul, and death – were seized upon by British-Nigerian artist Yinka Shonibare in his 2015 Butterfly Kid sculptures. Shonibare's intention was to address climate change. His figures sprout butterfly wings and are poised as though imminently about to soar into the sky. It is a fantastical vision of escape from an imagined future world obliterated by the human mismanagement of nature. In his work, and others throughout history, the butterfly is a symbol of imperilled nature's most colourful and beguiling design, offering both a warning signal and a reminder of the audacity of hope.