A teenage pilot has become the youngest person to fly solo around the world in a small aircraft.

Mack Rutherford, 17, landed at Sofia in Bulgaria, after a five-month journey across 52 countries.

Along the way, Mack, who was born to British parents but has grown up in Belgium, encountered sandstorms in Sudan and spent the night on an uninhabited Pacific island.

His sister Zara is the youngest woman to fly solo around the world.

She completed her own journey in January this year and disclosed that she had "given him advice on the route" as she travelled to Sofia to greet Mack as he returned to the starting point of his trip.

The previous record holder for flying solo was British pilot Travis Ludlow, who was 18 years and 150 days old when he completed his journey last year. 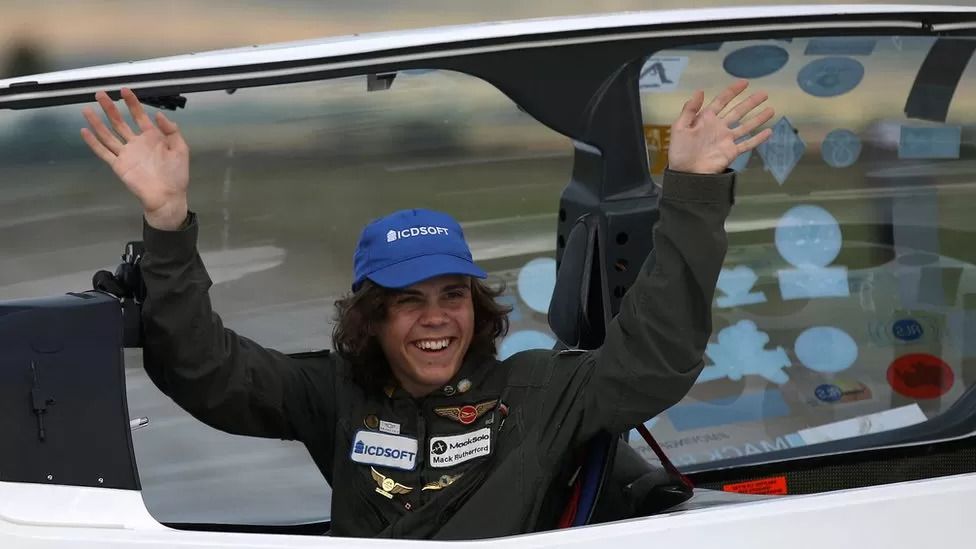 After completing the feat, Mack encouraged others to "follow your dreams, no matter how old you are".

"Work hard and move forward to achieve your goals", he added.

The trip took him through Europe, Asia, Africa, the US, across two oceans, with his plane touching down in the UK at Wick in Scotland and departing from London's Biggin Hill Airport earlier this week.

Mack, who comes from a family of aviators, set off from the Bulgarian capital on 23 March, with the arduous journey seeing the extreme heat in Dubai and unexpected airport closures in India.

The young aviator also said he had slept in a shed beside a runway on an uninhabited island in the Pacific Ocean after a "hairy moment" passing through through rain and low cloud.

In an earlier interview with CNN while he was part of the way through his journey, Mack described some of the beautiful places he was able to fly past, from wildlife in national parks in Kenya to the New York City skyline.

He added always having "something I can look at" helped him maintain focus in the low-altitude flights - which took up to 11 hours at a time.

Asked what his plans for the future were, Mack said: "I'm going to keep flying. I'm thinking of something like the air force, but I'm nowhere 100% sure on anything.

"After I finish this I've just got to focus on school and try and catch up as much as I can."

As a result of his efforts, he has broken two Guinness World Records - becoming the youngest person to fly around the world solo, as well as the youngest to circumnavigate the globe in a microlight plane.

The teenager flew a Shark - a high-performance ultralight aircraft which can hit a cruising speed of around 186mph (300km/h).

His sister Zara said that she was "constantly" trying to keep in touch and assist her brother while he was in the air.

"Our parents called him every day, and I joined in those conversations.

"I gave him advice on the route, on the flight, so that I could be useful to him."
Mack has previously said he wanted to be a pilot since the age of three and he achieved the feat in

September 2020 when he qualified for his licence aged 15.

His father Sam Rutherford is a professional ferry pilot, while his mother Beatrice is a private pilot.

And Mack's website explains that aviation goes back five generations in his family - describing his great-great-grandmother as being "amongst the first South African women to learn to fly".

Mack holds both British and Belgium nationality and has lived most of his life in Belgium.

He is currently being educated at the private Sherborne School in Dorset, whose website has been following his progress around the world. It also carries Mack's personal statement, in which he says "you don't need to be an adult to do incredible things".

Zara Rutherford, 19, landed at Kortrijk-Wevelgem in Belgium to complete her round-the-world challenge