The Archbishop of Canterbury will not personally use proposed new prayers to bless same-sex couples.

The Church of England this week said it wants to offer blessings to gay couples but would not allow priests to marry them.

Justin Welby said he celebrates the change, but has a "responsibility for the whole communion".

The Church also issued a formal apology for the "shameful" times it had "rejected or excluded" LGBTQI+ people.

In contrast to Archbishop Welby's stance, the Archbishop of York said he will offer the prayers which he believes puts the church in a "better place", becoming tearful as he made his statement.

Earlier this week, bishops told the BBC the church would not change a teaching to allow priests to marry same-sex couples, but that it will offer "prayers of dedication, thanksgiving or God's blessing" to gay couples following a civil marriage or partnership.

Their proposal will be debated at the Church's equivalent of a parliament - the General Synod - next month.

Same-sex marriage has been legal in England and Wales since 2013, but when the law changed the Church did not alter its teaching.

Mr Welby told a press conference on Friday that he would "continue to pray for all those who come seeking prayer and to pray with love", including those who were gay, straight, or who had worries about their relationships.

"But because of my pastoral care and responsibility of being a focus of unity for the whole communion I will - while being extremely joyfully celebratory of these new resources - I will not personally use them in order to compromise that pastoral care," he said.

However, the Archbishop of York Stephen Cottrell said he would conduct the prayers.

Mr Cottrell, who grew emotional while speaking at the press conference, said: "I'm really pleased it's changing for my gay friends," acknowledging that the change is not enough for some people.

"I wasn't expecting to get emotional but I am, because I think it puts the Church of England in a better place," he said, calling on those within the church who rejected the move to "hold together our unity".

Asked if he will offer blessings, unlike Mr Welby, he said: "Yes, I will. I mean, I completely support and understand Archbishop Justin's position, but his position is different to mine."

The proposed prayers are written to avoid any mention of sex or to suggest it sees same-sex civil marriage as marriage - which the Church views is between one man and one woman.

On Friday, the Church of England also issued a formal apology for the times it had "rejected or excluded" LGBTQI+ people.

"For the times we have rejected or excluded you, and those you love, we are deeply sorry. The occasions on which you have received a hostile and homophobic response in our churches are shameful and for this we repent," it said in a letter.

"As we have listened, we have been told time and time again how we have failed LGBTQI+ people. We have not loved you as God loves you, and that is profoundly wrong. We affirm, publicly and unequivocally, that LGBTQI+ people are welcome and valued: we are all children of God." 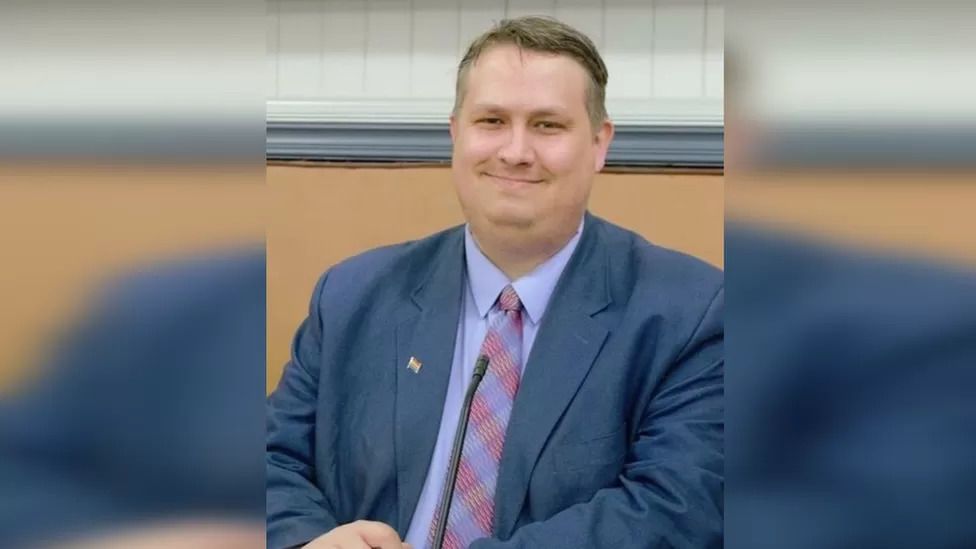 Gay Anglican Mathew Hulbert told the BBC he felt "great disappointment" over the bishops' decision not to propose same-sex marriage to the General Synod and is considering leaving the Church of England.

"Like anyone else if I wanted to get married, I'd want to get married in my church," said the 42-year-old from Leicestershire. "Lots of gay people and perhaps lots of young gay Christians will think, 'do I have to choose?'"

Mr Hulbert, who has been a practising Christian since childhood, also took issue with the Archbishop of Canterbury stating he would not perform blessings for same-sex couples, if the proposal is passed. The charity worker believes it sends a signal to other churches they don't have to offer blessings, and thinks the Church of England needs to choose between its conservative and liberal elements.

He added: "The Church shouldn't just tolerate us, it should celebrate us. LGBT+ people are made in the image of God as anyone else, and we feel like were being demonised just for being who we are and who we love."

Dr Steven Croft, the Bishop of Oxford, said the church has "further to go" on the issue and called for a change in its doctrine to allow gay marriage, becoming the most senior bishop in the Church of England to do so.

"As I've listened to the stories and experiences of LGBTQ+ people, all of my pastoral instincts pointed to finding a way of interpreting the Bible to allow for greater love and support, tolerance and the blessing of their partnerships", he said, adding that he looked forward to new pastoral guidance that will "enable our clergy to order their relationships according to their own conscience and allow them the freedom to enter into same-sex civil marriage."