The 355-square-foot lot that Minwook Choi of Smaller Architects chose for his family home in Seoul, South Korea, presented a daunting challenge-as well as an opportunity. "The site had been abandoned for a long time," says Minwook. "People thought the land was too small to construct anything, and so the price had become reasonable." 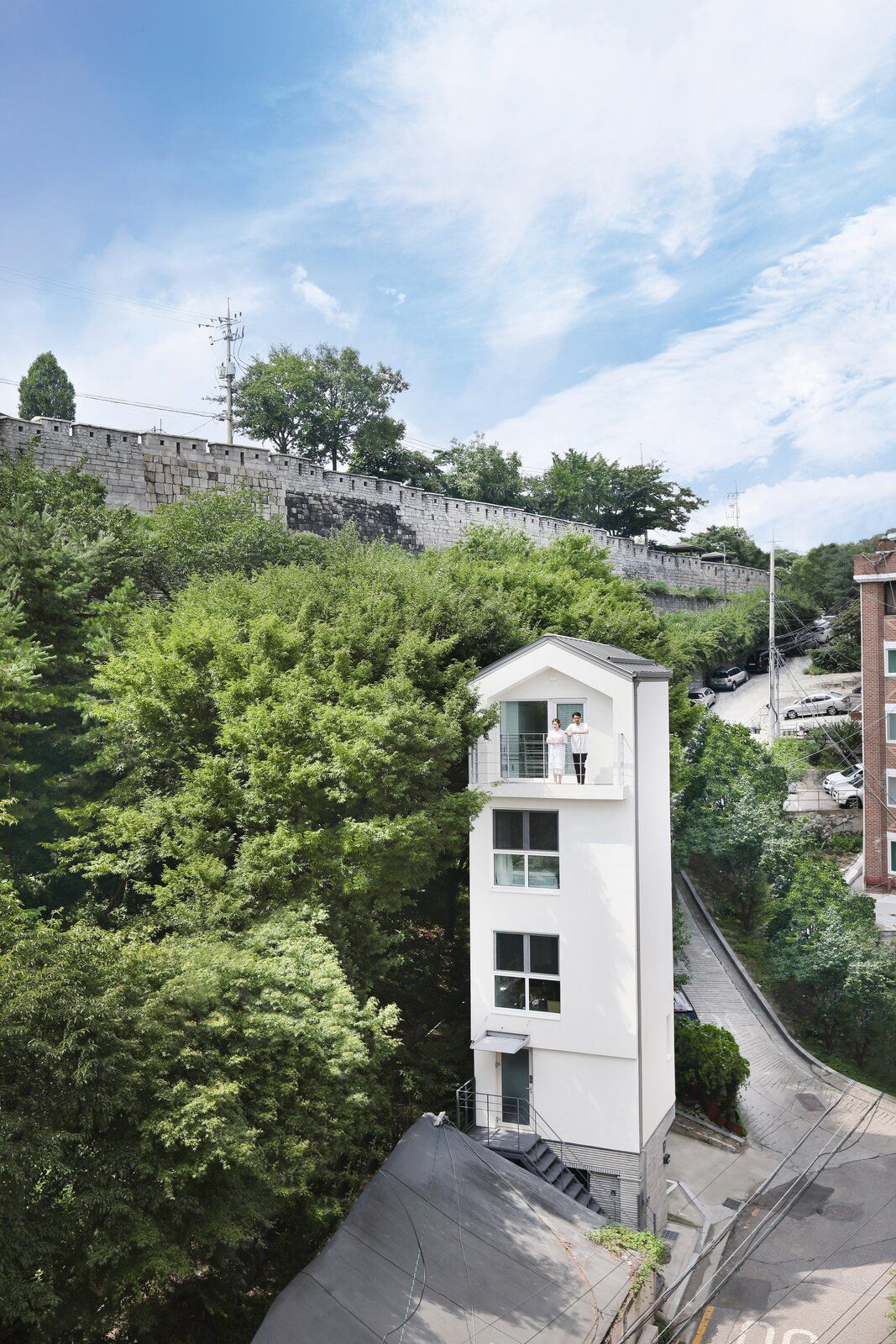 Architect Minwook Choi’s 710-square-foot Seroro House rises from a tiny urban lot in Seoul that had long been neglected because of its challenging size.

"Aside from being too small, the plot has many benefits," continues Minwook, who lives with his wife, Ahyoung, and their two cats, Conti and Margaux. "It’s conveniently situated near several lines of public transportation and faces a park and the Fortress Wall of Seoul, a UNESCO World Heritage Site."

The property is also thankfully close to Minwook’s architecture office. "I wanted to live near where I work, but the cost of housing in Seoul is super high," he says. "I couldn’t afford a nice apartment-an apartment in Seoul is more expensive than a house-so I decided to build for myself." 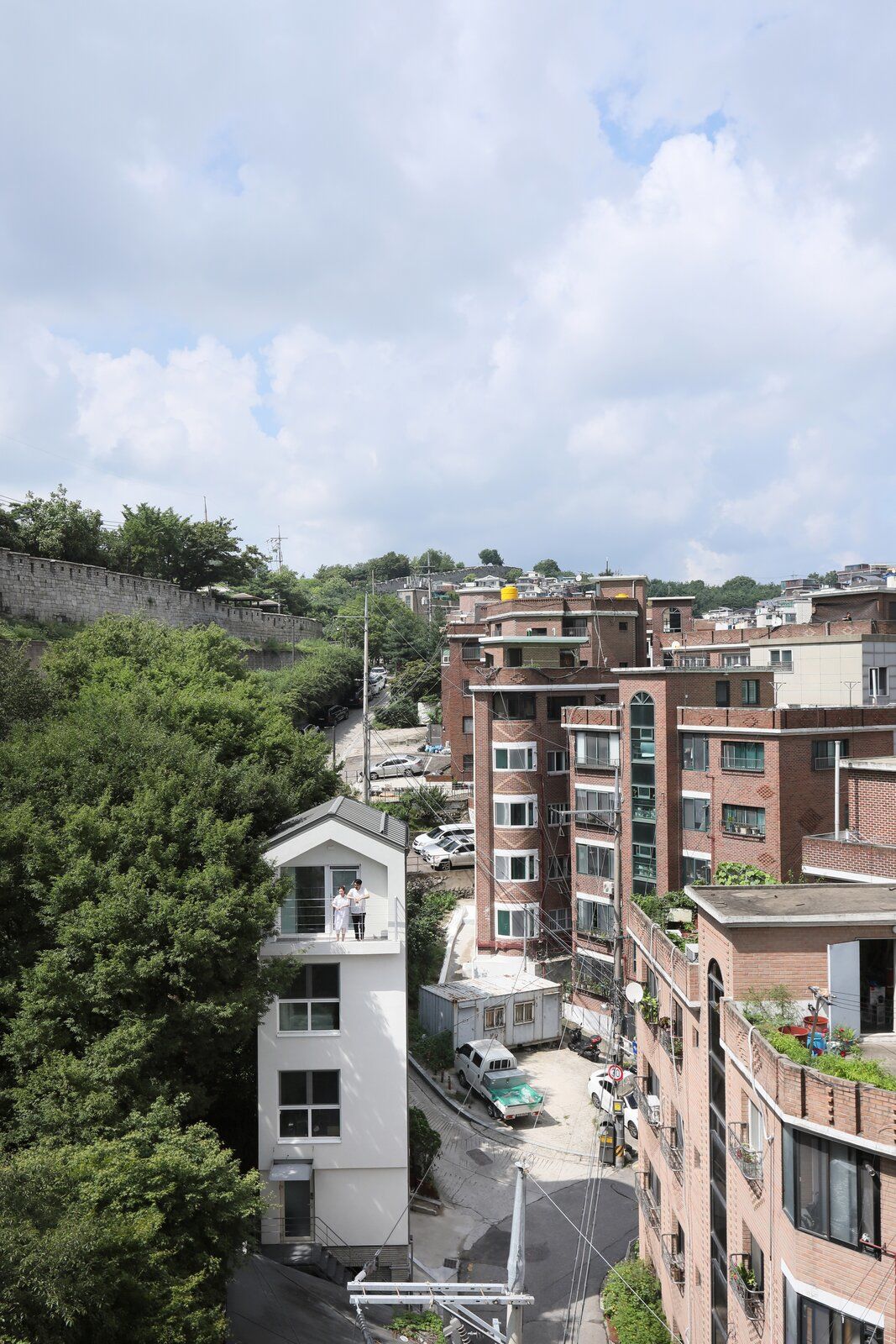 The compact home, clad in white acrylic stucco, features windows on the southern and western facades, opening the home to the lush hillside.

The couple nabbed the affordable property and began to imagine a tall, narrow home that would take advantage of the site’s positive attributes. The resulting Seroro House, which means "vertical" in Korean, is a tower of sunlit rooms stacked over five stories.

The home’s location also offers a welcome respite from the urban context. "Looking out from each floor at trees in the park gives us a sense of seasons and time," says Minwook. "And with COVID-19, we’re very grateful for our house with a view." The home’s windows on the southern facade capture light while the west-facing windows frames views of the park; the other facades feature fewer openings, since they face the road. 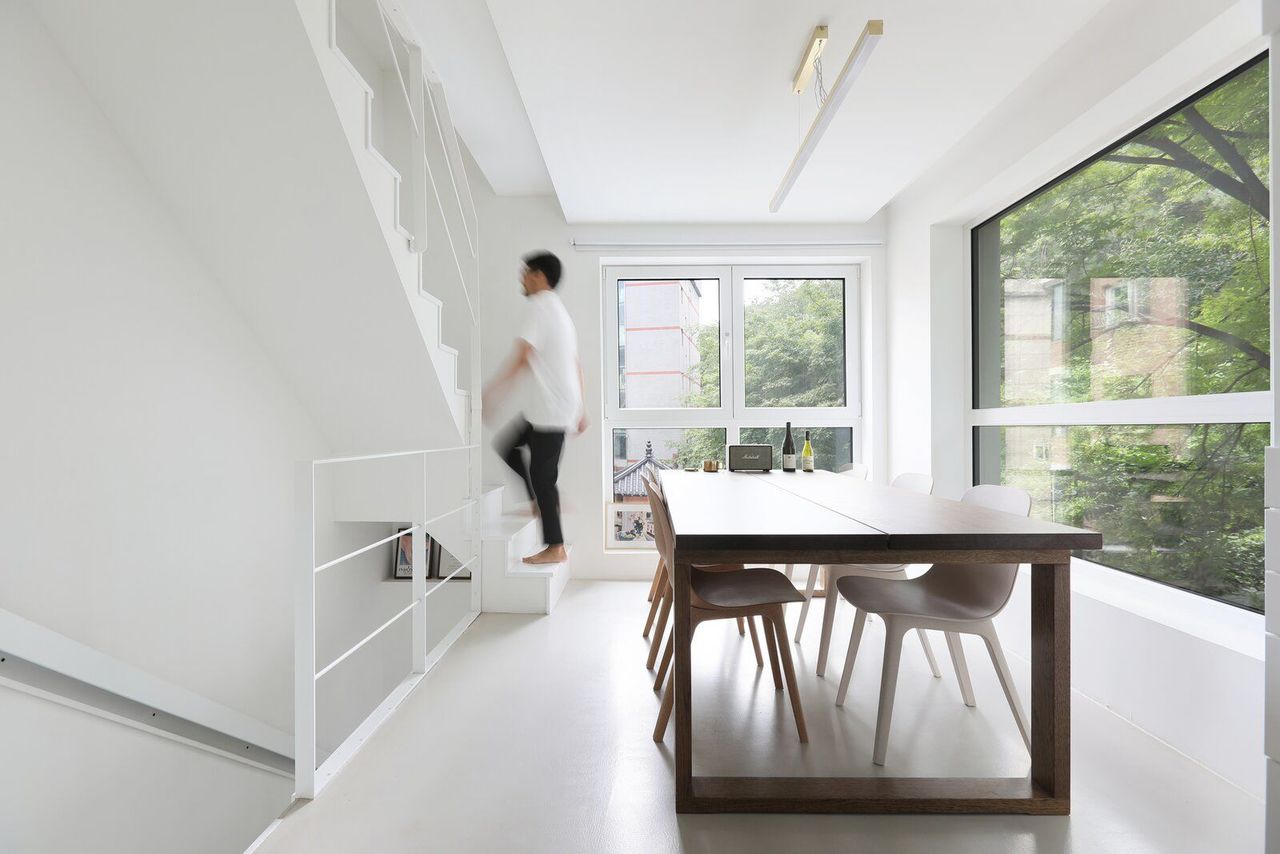 The kitchen and dining space sit on the second level, where expansive windows frame the treetops that populate the adjacent hillside. 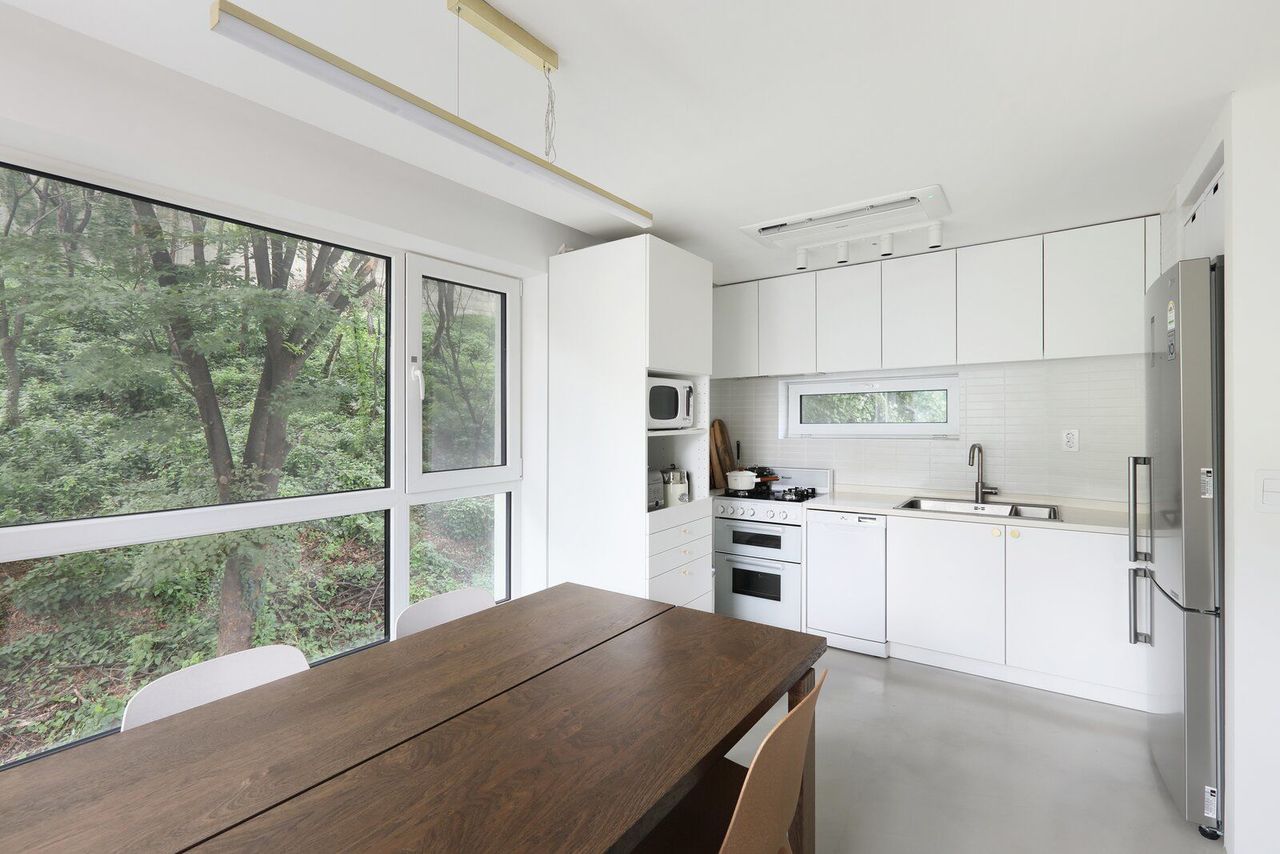 Clad with bright white acrylic stucco, the skinny home curves at the intersection of the eastern and northern walls, following the shape of the land, which is "like an asymmetrical pentagon," says Minwook. "I thought the curved design looked like a lighthouse from afar and would interest people. I wanted to spark curiosity." 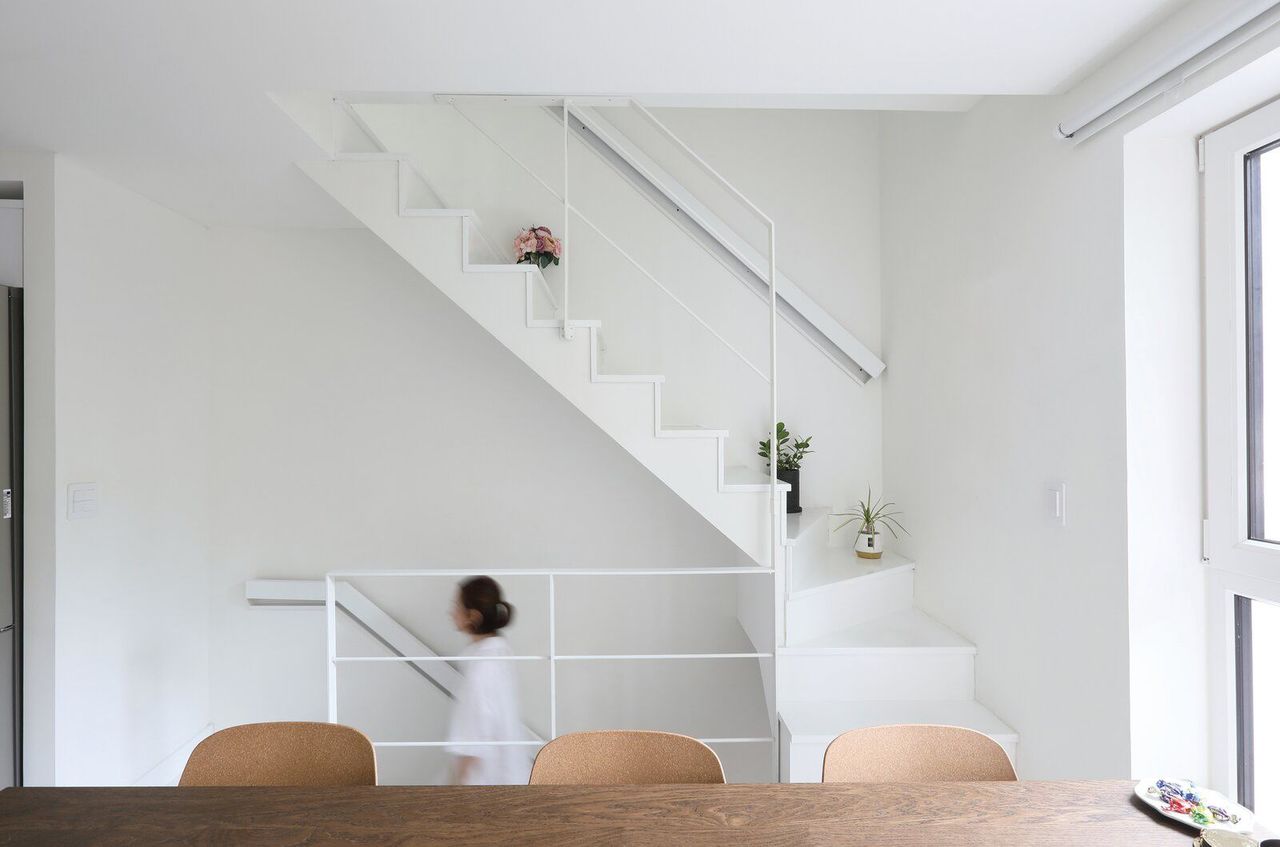 The narrow, steel and-wood staircase maximizes space for the rooms.

On the interior, white plasterboard walls create a feeling of spaciousness, allowing the park views to be the main focus: As the couple move from room to room, the clean walls serve as a gallery-like background to the greenery-filled windows. Parking on the ground level cedes to the first-level living room and bathroom. The kitchen and dining space sit on the second level, while the third level holds a bedroom and bathroom. A laundry room, bathroom, and closet are arranged on the top level. 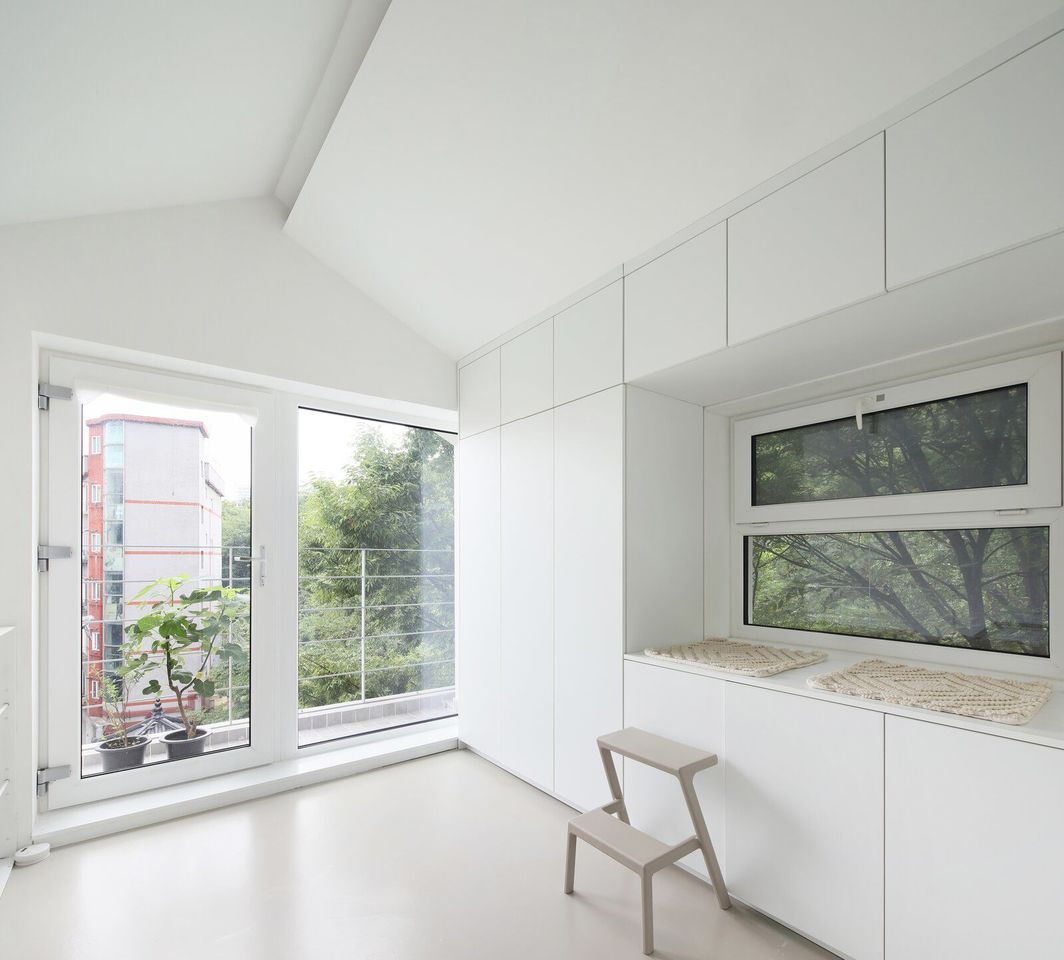 A laundry room, bathroom, and closet occupy the topmost floor.

The steel-framed wood staircase, painted white to blend in with the crisp interiors, is smaller than what you’d typically expect. "As the house is vertical, I wanted the movement between the floors to be minimal for the sake of convenience," Minwook explains. 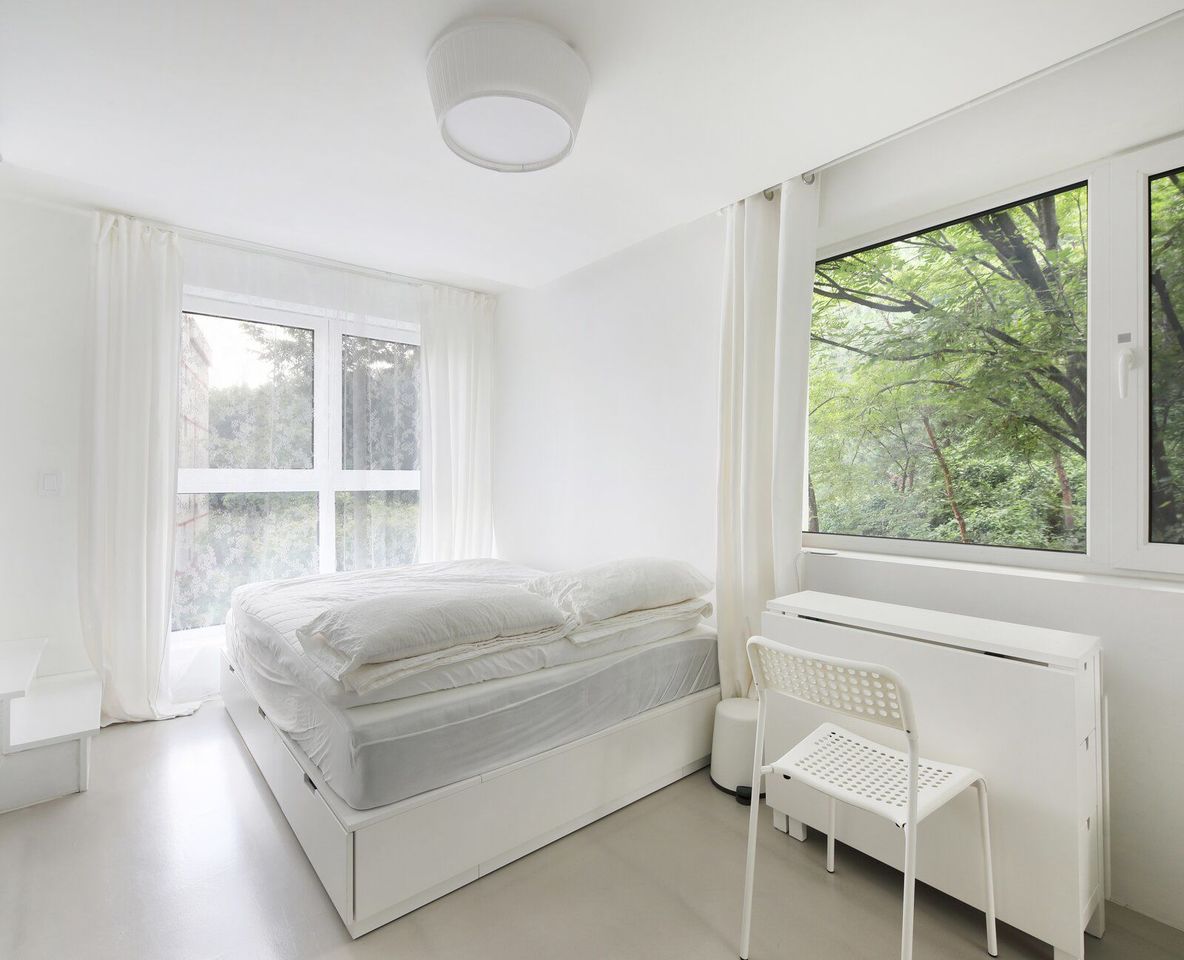 The third-level bedroom is also spare, drawing attention to the picturesque greenery outside. 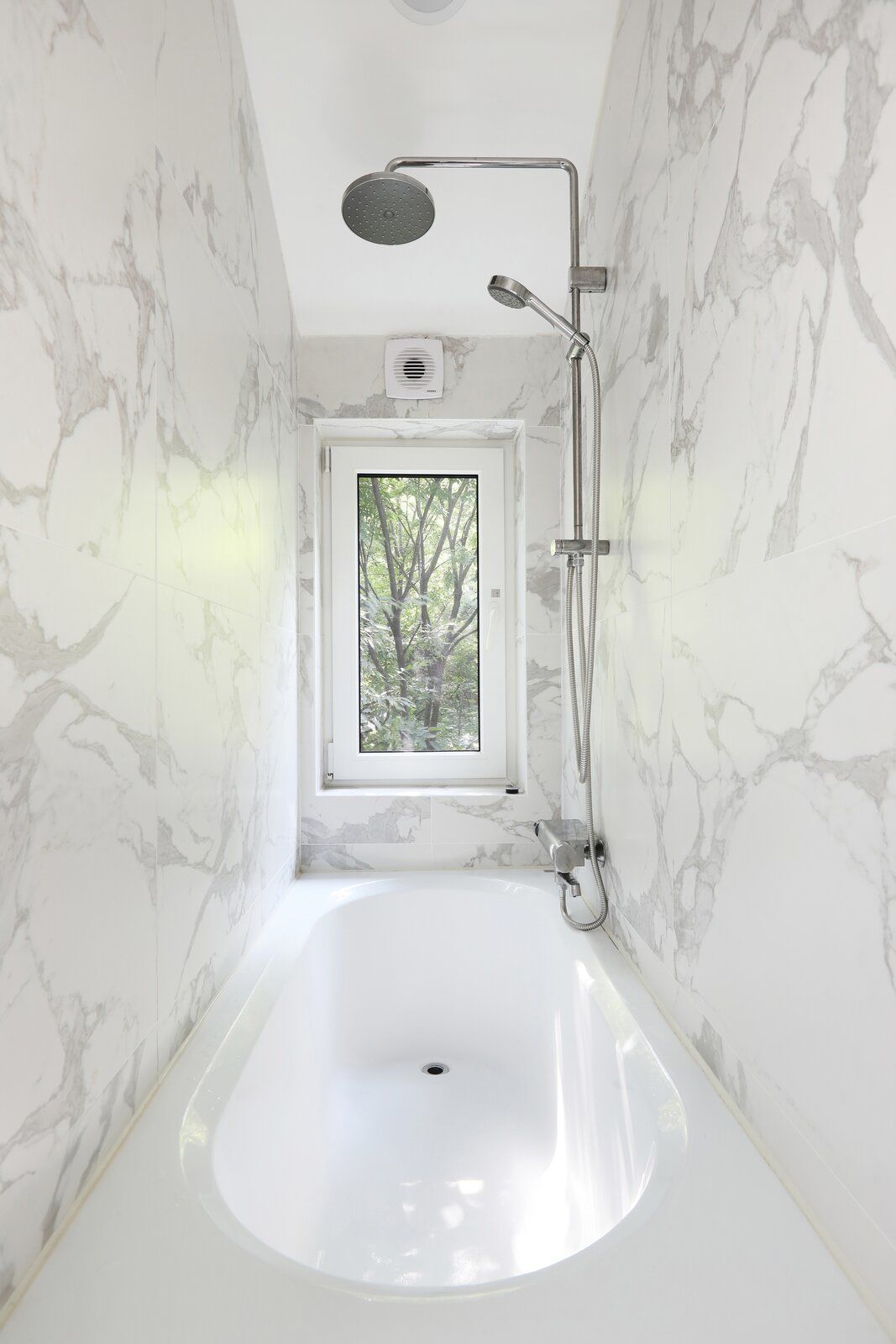 In the breezy bathroom, three walls are finished with white marble.

Though some may assume that living in a vertical layout is restrictive, Minwook finds it to be wonderfully efficient. "It gives us more privacy," he says. "I can’t hear what my wife is doing when we’re on different floors. We’re very pleased, as we can enjoy our house together or alone." The cats like it, too-perhaps even more than their owners: "It’s like an amusement park for them. We say that it’s the largest cat tower in the world." 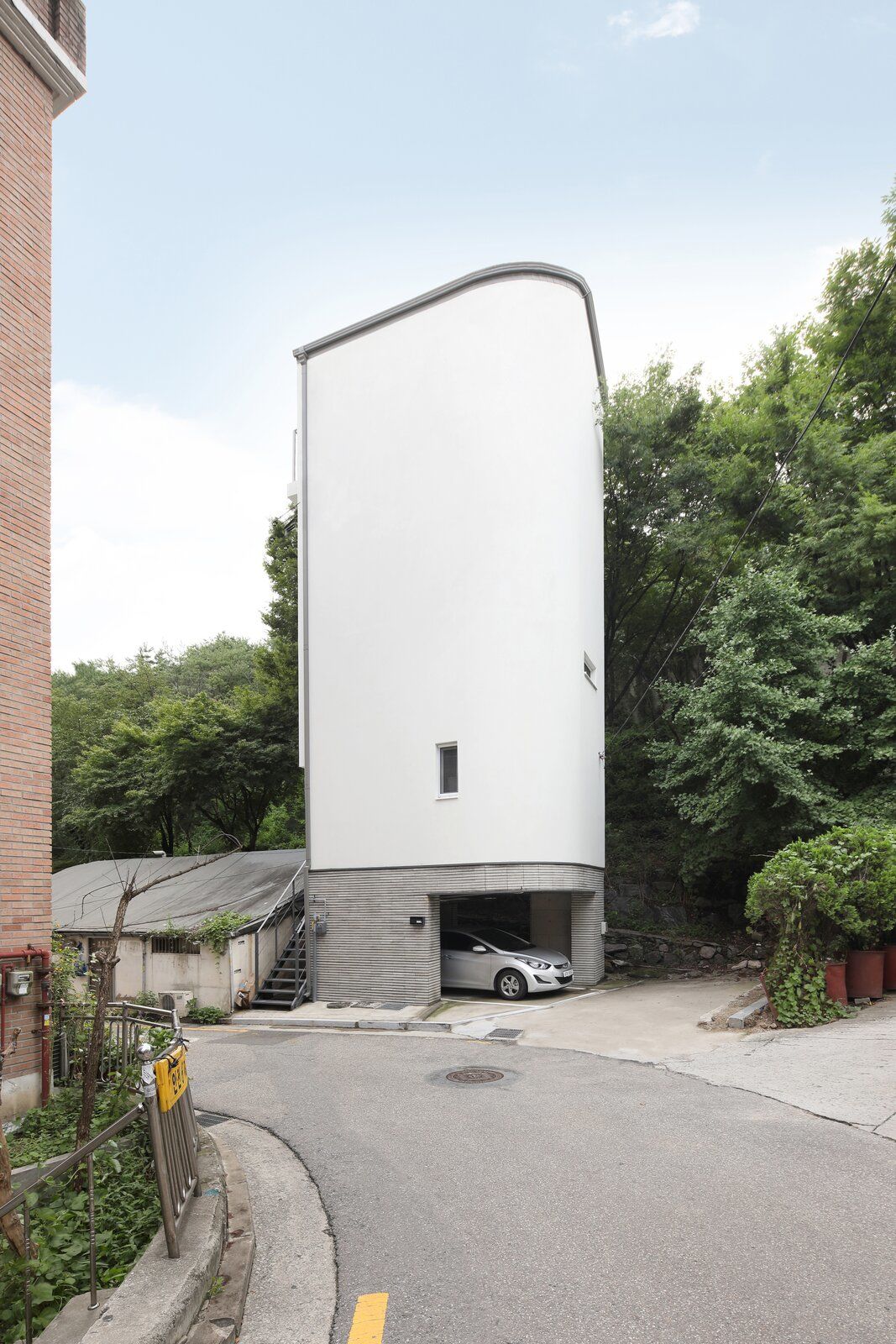 The architect placed only a few windows on the eastern and northern facades, which intersect in a pronounced curve, to maintain privacy.

"In Seoul, time spent commuting is about two hours on average—and sometimes, it’s as much as four hours per day," says Minwook. "The tiny house is much cheaper than traditional housing, and in saving precious time, the quality of life is much higher."